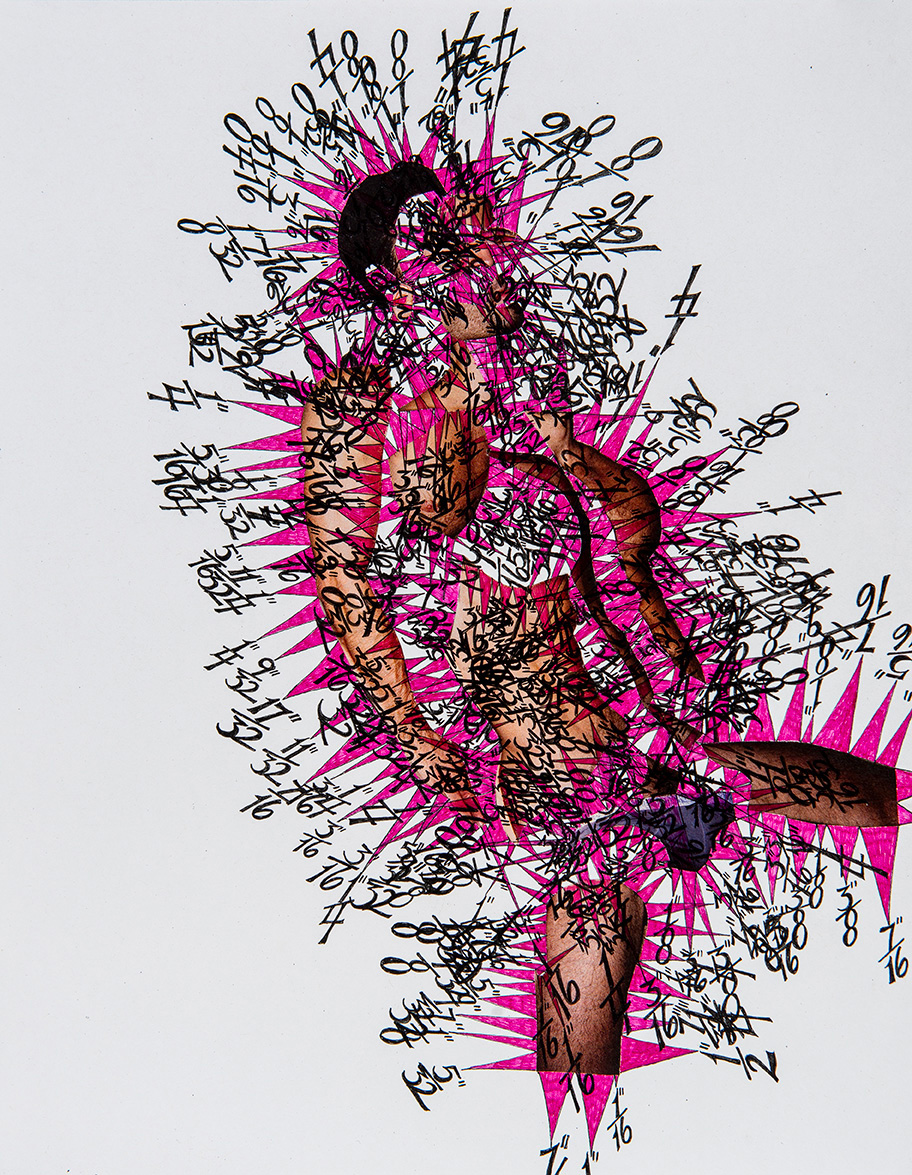 It is a startling title, but Castrejon is trying to direct our attention to our minds, bodies, and souls. The CalARTs grad, whose work has been shown internationally, fills the main gallery with works he says helped him get through the continued decline of his father’s health due to dementia, heart disease, and rectal cancer. The feeling of helplessness and uncertainty Castrejon felt was processed through these works to understand these diseases and come to terms with their debilitating progression. In addition, the anxiety and the unexpected Covid infection of his older sister only propelled Castrejon into his work to ease the stress and uncertainty of this infection during this dark period of time.

“I don’t think I could have made it through that period without those pictures,” he says. “The pictures are about measurement and measurement is my form of control.”

For Castrejon, measurement is the act of assigning numbers to phenomena according to a rule. And much of his work gives us data surrounding and filling-in familiar representations, until the data almost obliterates the form.

Castrejon says his work usually begins with a found design: “Images of beauty, queer bodies, HIV, war, death, destruction, and tragic events,” taken from magazines, newspapers, art catalogues and online sources, and then broken into smaller identifiable geometric shapes. Castrejon says, “I write measurements or other definable data or units along the side of the shapes to question and describe what I see from the parts of the whole.” And in doing so, “I challenge our perceptions of what is real, forcing us to think critically about information that is constantly changing, bombarding our everyday lives through images selected in directed advertisements, pop-culture sources, editorials and news stories.”

Each body sculpture in “Mind Heart Rectum” is measured in inches and calculated angle degrees; and each length along these fragmented geometric shapes is measured in (x inches) and all angles are measured in calculated angle degrees. With the use of a protector and calculator, Castrejon uses the equation (360°- x°=y°) to uncover the outside angels of each shape accordingly. And, then he uses thin black strips of paper as line indicators that help draw out those units outside the bodies creating a chaotic web or aura made from a rational quantitative process. Measured units are written at the ends of these black strips of paper allowing the viewer to come closer to the bodies, explore the bodies, and find the units’ point of origin within the body. Finally, the bodies are covered with strips of researched data and information concerning dementia, heart disease, and rectal cancer.

Castrejon describes his artistic goal as “ordered chaos.” The artist finds that even the kind of tragic event that words sometimes fail to describe can still be measured by art, and his methodical approach allows him to represent the difficult imagery of disaster, war, and chaos in an analytical manner.

As a senior research coordinator at the LA Gay and Lesbian Center – where he works with researchers studying the effects of drug use on the immune systems of sexually active Black and Latinx men – Castrejon has long explored HIV/AIDS and sexuality. But this new body of work hits closer to home.

“Mind Heart Rectum” examines Castrejon’s personal reaction to the dementia, heart disease, and rectal cancer that afflicts his Mexican immigrant father. As a caregiver for his father along with his mother and sisters, Castrejon saw how the diseases changed his father’s body and mind, and he believes by creating these works and making the private public, we can inspire people to learn more about their bodies and chronic illness, and help them talk about it without stigma.

The massive sculptures – the largest being 9 feet tall – are intentionally created to represent young bodies. Painted in varying hues of brown and black to represent Black and Latinx men, Castrejon wants to re-enforce that his father’s illness did not just appear due to his old age but through contributing factors and behaviors in his younger years. Like so many other men, including many Latinos, his father didn’t want to admit he was in pain, and wouldn’t seek medical care. Making it worse were language barriers, financial concerns, lack of awareness to these illnesses, and a lack of prevention messages.

Castrejon says, “I hope “Mind Heart Rectum” can be a positive experience that encourages introspection and reflection, and uncovers a silver lining in loss.”