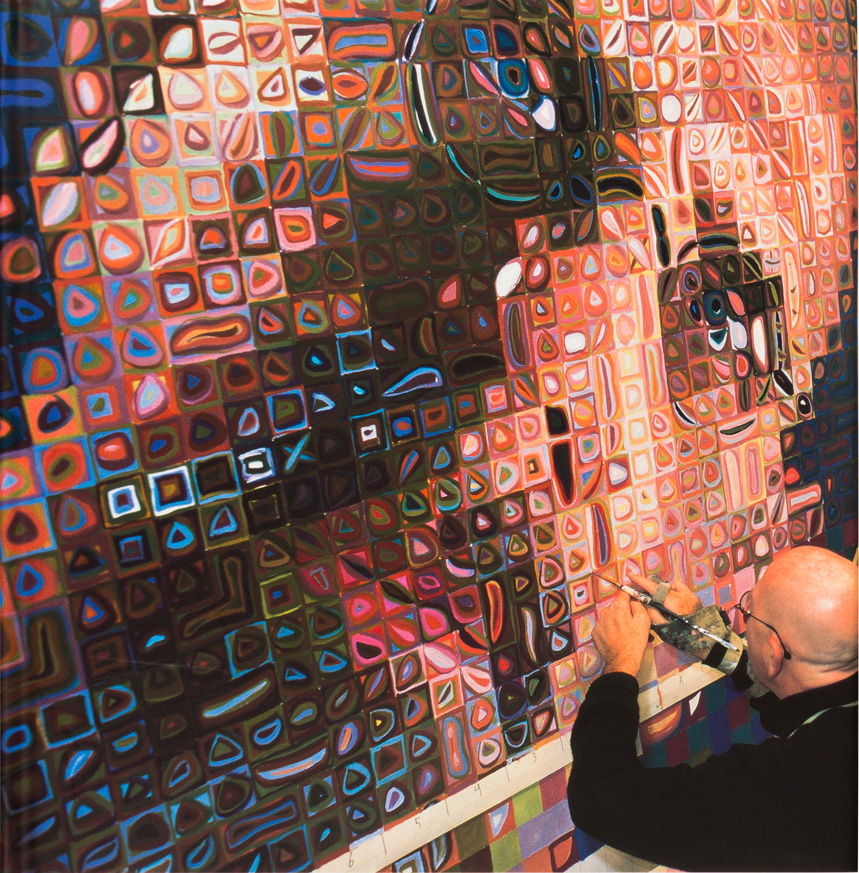 Chuck Close, who emerged as an art-world force in the 1970s and ’80s with his intimate, large-scale Photorealist portraits of tremendous visual and psychological impact, died of congestive heart failure August 19 in Oceanside, New York, at the age of eighty-one. Close’s career was marked by three jolting phases, beginning with his work of the late 1960s, when he began creating intensely unglamorous close-up portraits, frequently of himself and family members, that revealed his sitters’ every pore and blemish. In the late 1980s, following a spinal injury that left him confined to a wheelchair, he began making massive gridded portraits of fellow artists comprised of thousands of brilliant fragments that coalesced into recognizable faces when viewed from afar. Then, in the late 2010s, several women accused Close of sexually harassing them while they posed for him in his studio, leading to the cancellation of a show of his work and to a wider investigation of how and whether to separate the art from the artist, as well as a reexamination of the studio conditions in which nude models typically work.

Close was born in 1940 in Monroe, Washington, to a piano-teacher mother and a plumber father who was also an inventor and who would die when Close was just eleven. A poor student who suffered from dyslexia as well as face blindness, Close turned to artmaking at an early age, with the support of his parents, who supported him, paying for his art lessons. After attending community college, he graduated from the University of Washington, Seattle, before attending Yale University, where he would earn his master’s degree in fine arts alongside Jennifer Bartlett, Brice Marden, and Richard Serra. Originally drawn to Abstract Expressionism, particularly the work of Willem de Kooning, Close in the early 1960s began painting in what would become his early signature style, forcing thinned out black acrylic paint through an airbrush to create massive, uncannily smooth-looking portraits of himself and his close friends and family members, using photographs as reference. The first of these works, the iconic Big Self-Portrait of 1967–68, was snapped up by Minneapolis’s Walker Institute of Art, which bought it directly out of his studio for $1,300 in 1969. “I am not trying to make facsimiles of photographs,” Close told Artforum’s Cindy Nemser in 1970. “Neither am I interested in the icon of the head as a total image. I don’t want the viewer to see the whole head at once and assume that that’s the most important aspect of my painting. I am not making Pop personality posters like the ones they sell in the Village. That’s why I choose to do portraits of my friends—individuals that most people will not recognize. I don’t want the viewer to recognize the head of Castro and think he has understood my work.” Close would go on to mine this vein throughout the 1970s, switching to color in the early part of the decade, and continuing into the 1980s.

In 1988, while in New York, Close was stricken with a collapsed spinal artery and left paralyzed from the neck down and in a wheelchair at the age of forty-eight. After undergoing intense rehabilitation, he began painting again. Using a brush strapped to his wrist and forearm, in which he had regained some movement, and working across enormous canvases marked off into grids by assistants, he created portraits of fellow art- and music-world giants including Cindy Sherman, Lou Reed, Philip Glass, and Kara Walker that he rendered in a mosaic style, with the points variously taking the shape of triangles, squares, and dots. The works of this nature when seen close up are physically stunning, while resolving before the eye, when viewed from far away, into brilliant, evocative portraits that seem almost liquid in their clarity. As the new millennium dawned, Close would bring this process to bear in works on jacquard silk and in ceramic tile, the latter notably in use in his 2017 portraits gracing the Eighty-Sixth Street station of New York’s long-in-the-works Second Avenue Subway.

In 2017, several women who had worked as artist’s models for Close said that he had sexually harassed them while they were in his studio, making crude and inappropriate comments about their bodies between 2005 and 2013. Coming amid the surging #MeToo movement, the allegations would lead the National Gallery of Art in Washington, DC, to indefinitely postpone and ultimately to cancel a planned 2018 show of Close’s work. Close acknowledged the abusive comments he made to models, telling the New York Times, “If I embarrassed anyone or made them feel uncomfortable, I am truly sorry, I didn’t mean to,” claiming that he had intended the remarks as part of a professional evaluation of their characteristics as they related to his work. Dr. Thomas Wisniewski, the artist’s neurologist, cited frontal temporal dementia, with which Close was diagnosed in 2015, as a possible contributor to his behavior.

Close was awarded the National Medal of Arts in 2000 by President Bill Clinton and later served on the President’s Committee on the Arts and Humanities under the Barack Obama administration. His work is held in the collections of the Metropolitan Museum of Art, the Museum of Modern Art, and the Whitney Museum of American Art, all in New York; the National Gallery of Art in Washington, DC; and the J. Paul Getty Museum in Los Angeles among other institutions.

Despite being one of the most influential and widely recognized artists of the twentieth and early twenty-first centuries, Close remained philosophical about his practice. “There are no good and bad days,” he told Artforum in 1998. “You sign on, and if you believe in the system, eventually you get a work. In the same way that you make a sweater: you knit one and purl two long enough and you do it right—eventually you get a sweater.”