Blitz Bazawule: ‘A Moment in Time’
Imagining a Connection Between Past and Present 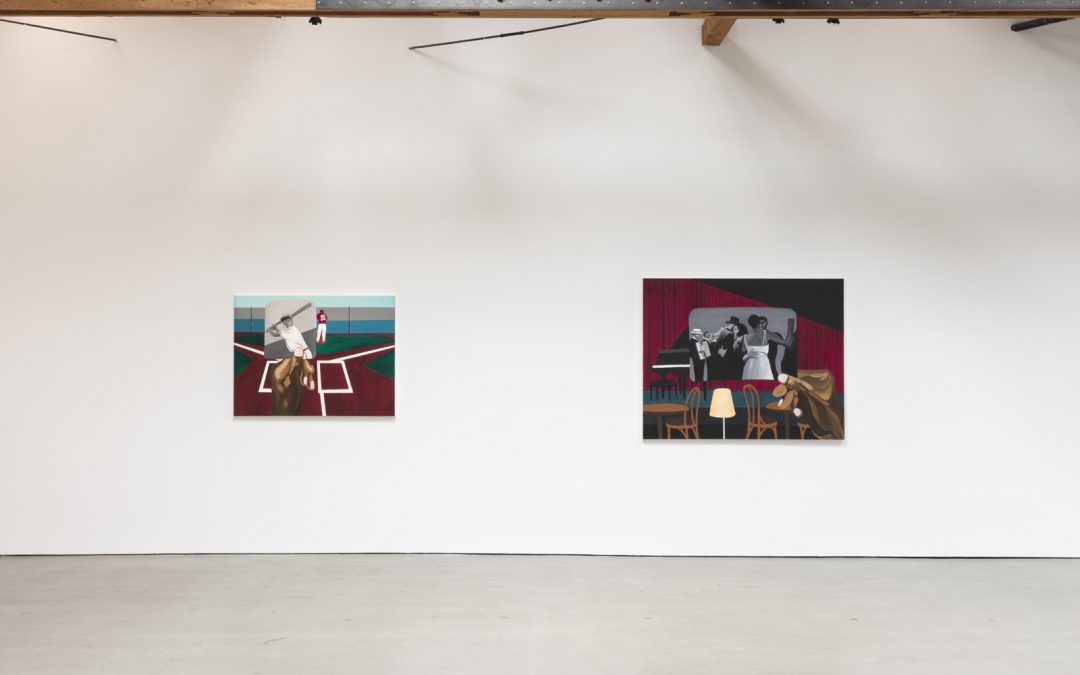 A Moment in Time

Blitz Bazawule is an artist who works across numerous disciplines. He is well known as a director, producer, musician and author. Yet he is also an accomplished visual artist who has a series of new paintings on view at UTA Artist Space that explores the relationship between past and present. This series, A Moment in Time, stems from Bazawule thinking about the old photographs that hung on the walls of his childhood home in Ghana, freezing images of his family at different points in time. This memory was piqued when he happened upon a vintage photograph of a woman standing in a square in Morocco. Standing in the same place where the photograph was taken prompted him to think about this type of juxtaposition. Struck by the similarities and differences between then and now, he embarked on a series of paintings in which he superimposes images of Black individuals and families from old photographs onto contemporary scenes. 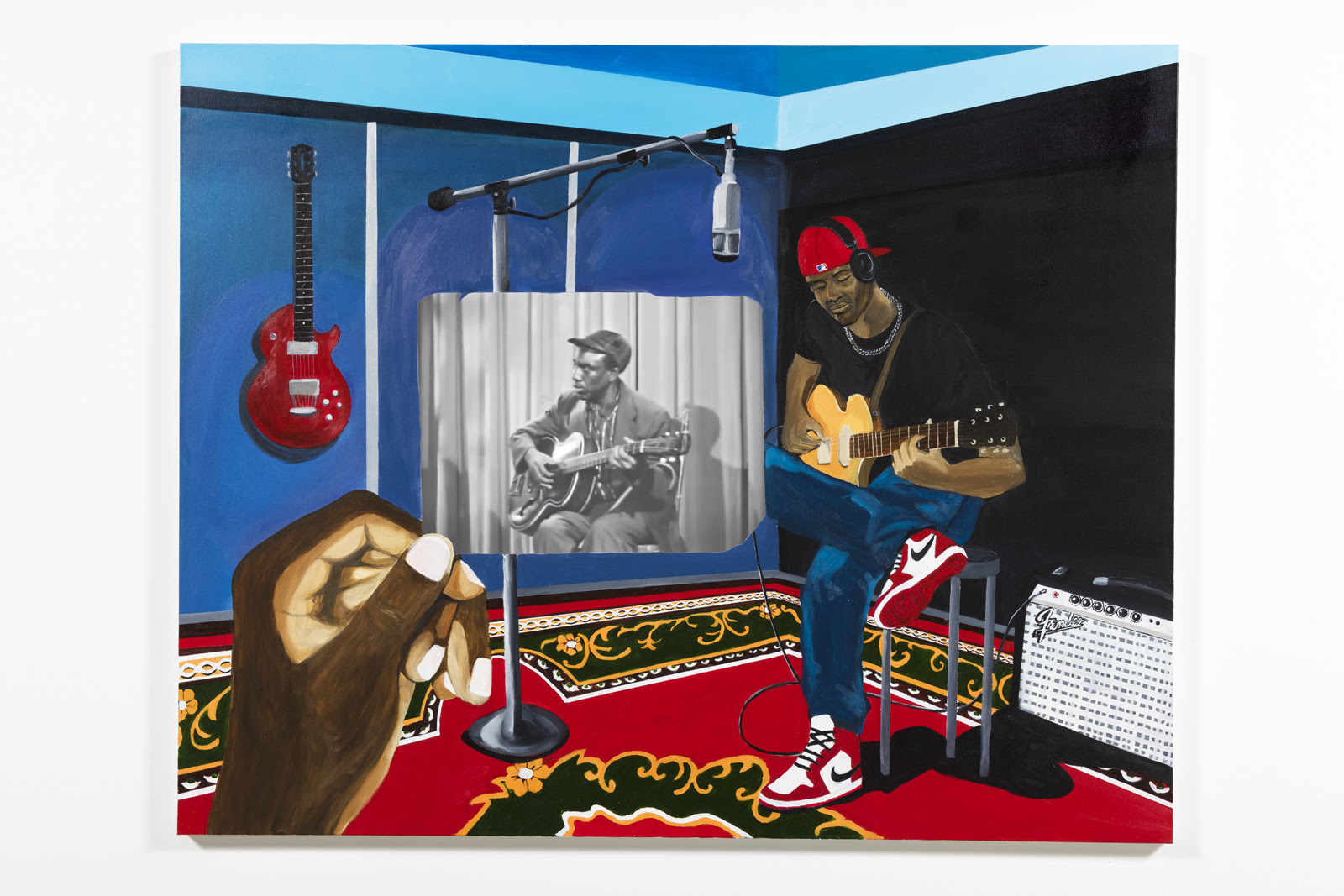 These figurative works, painted in the illustrative style of artists like Jacob Lawrence and Romare Bearden are both nostalgic and forward thinking simultaneously. Bazawule states in the press release for the exhibition, “It is the viewer experiencing the painting today, transported to yesterday with a clearer view of tomorrow.” Each painting depicts a familiar place, be it a barbershop, pool hall or baseball field painted in vivid colors. At the base or side of each image is a hand that juts into the composition, casually holding a painted version of a black and white photograph in front of the scene. 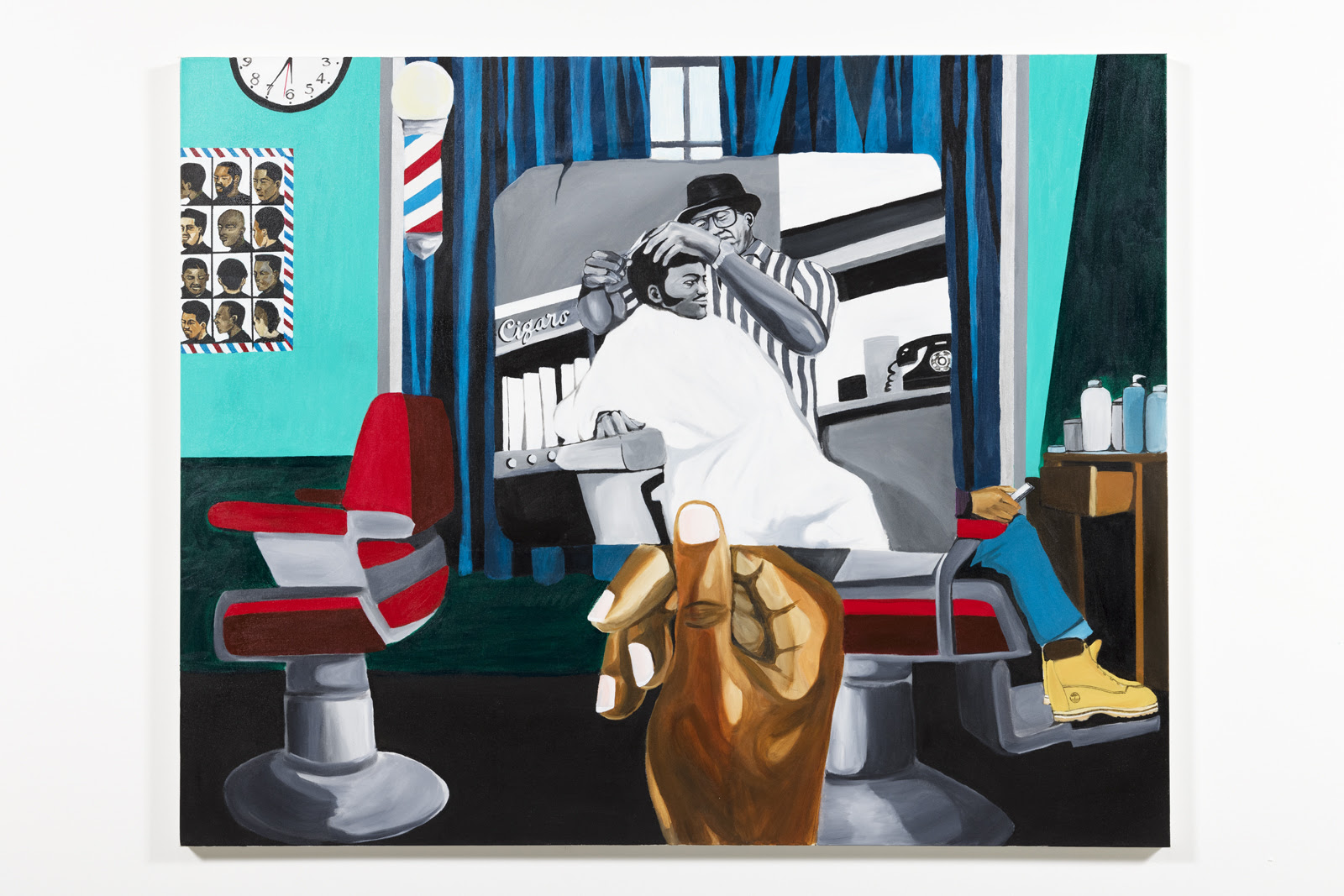 As the viewer’s eye moves back and forth from the hand to the photograph to the current location it is impossible not to think about the time passing and what might have changed both personally for the subjects as well as universally, with respect to culture and politics. For example, in The Pool Hall (all works 2021), three well-dressed pool players are gathered at the side of the table. One Black male figure is posed, ready to shoot the cue ball. The others — a smiling Black woman and cigarette-wielding Black man — watch as he readies the shot. The current location is a pool hall with three tables, decorated with 1960’s style wall hangings, yet devoid of people. 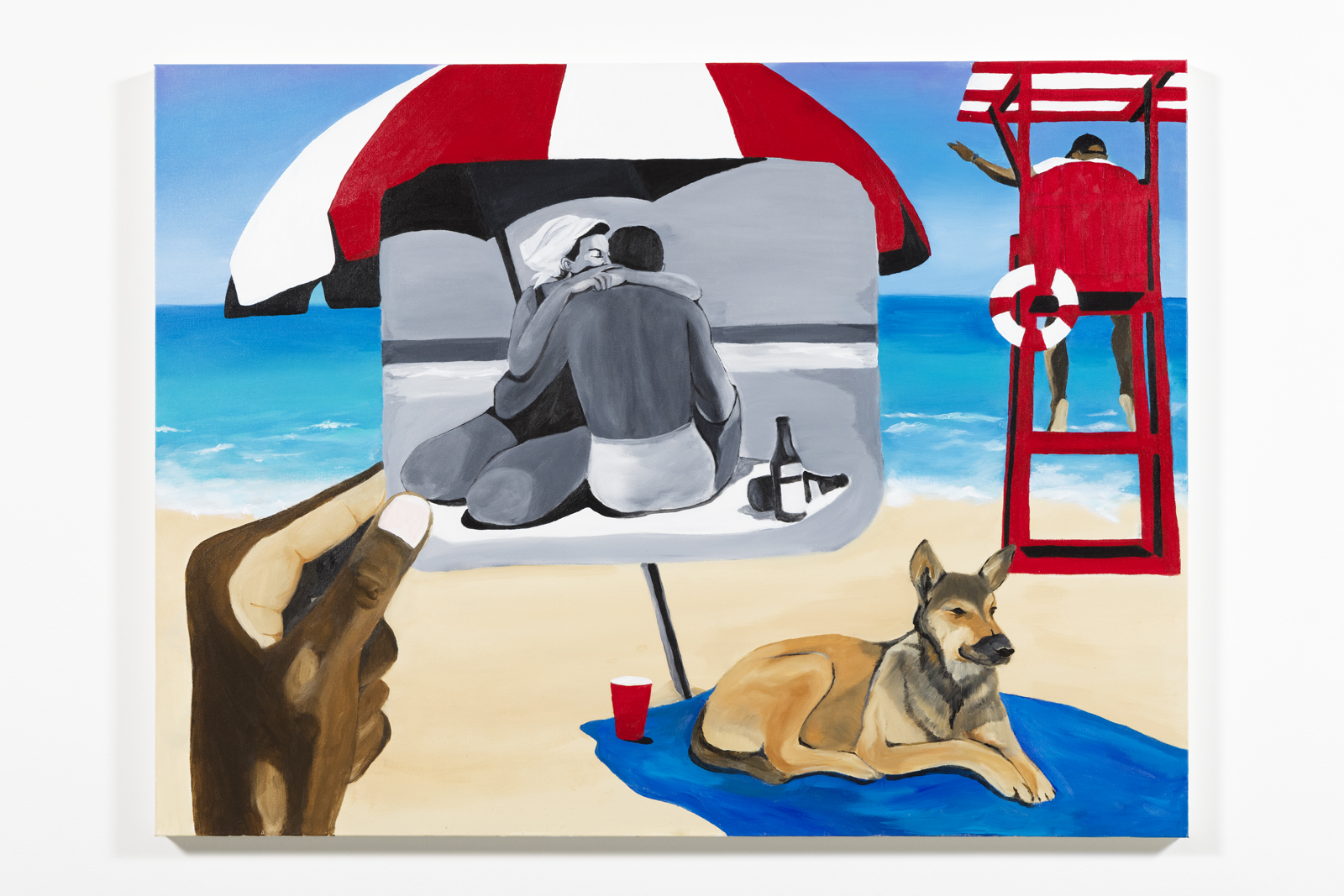 The Commute is a painting of a New York subway train (specifically the Brooklyn Express N Train) with one passenger regarding their cell phone. Atop this everyday scene, Bazawule montages a photograph of a Black family seated on similar public transportation, perhaps en route to Bay Ridge. The father appears to be contentedly looking out the window with his wife and son by his side. The painting inspires thoughts about the transformation of the NY Subway system, its riders, its safety and upkeep over the years. 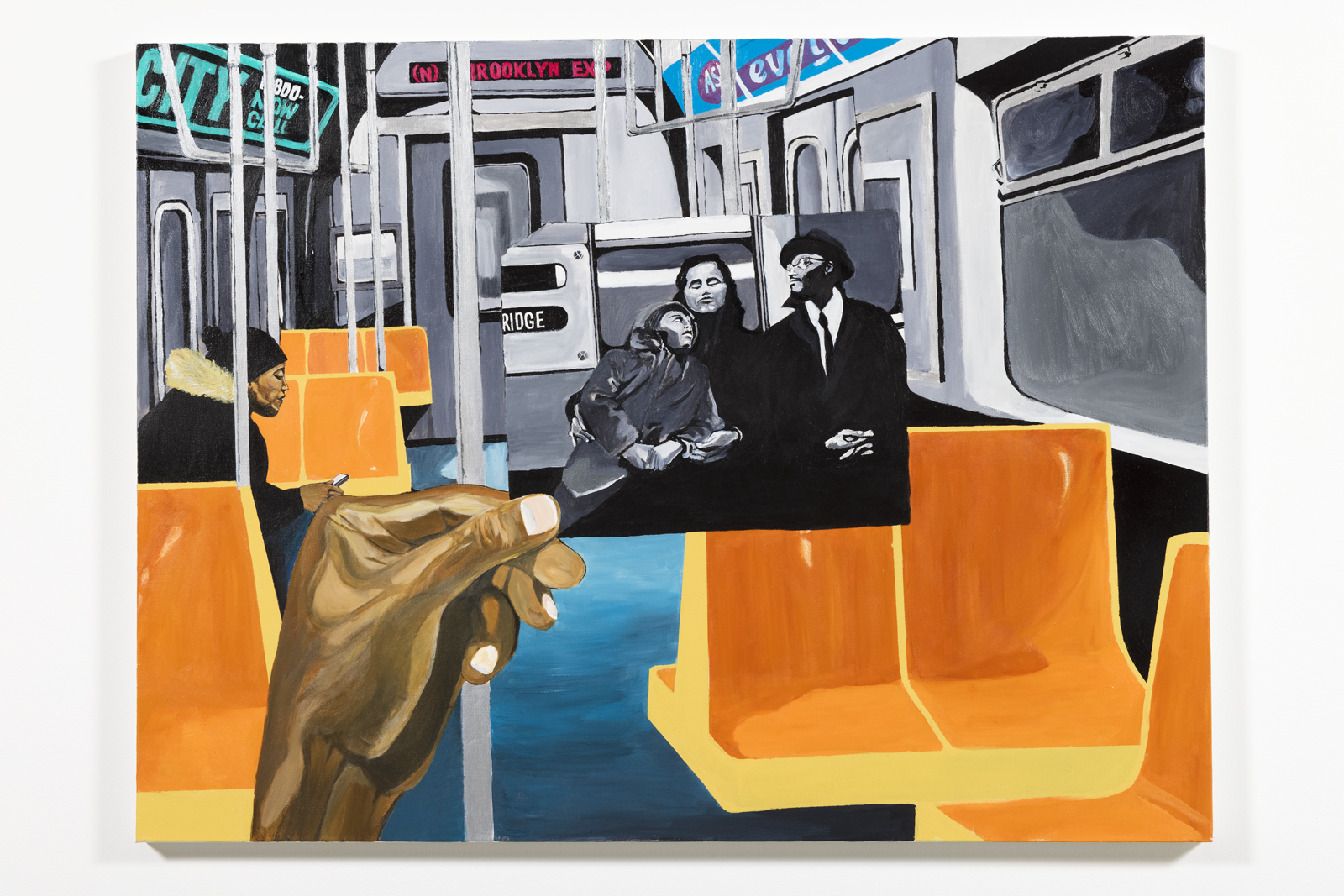 In Beach Day, Bazawule illustrates a pleasant day at the beach. A dog sits on a blue blanket facing away from the receding tide. A red lifeguard stand is positioned at the water’s edge, the lifeguard gesturing toward unseen figures. The scenario presented in the photograph shows a couple embracing beneath a beach umbrella at a shore line that parallels the one behind it. The umbrella in the black and white image aligns with the red and white umbrella in the present scene, suggesting a seamless continuum from past to present. 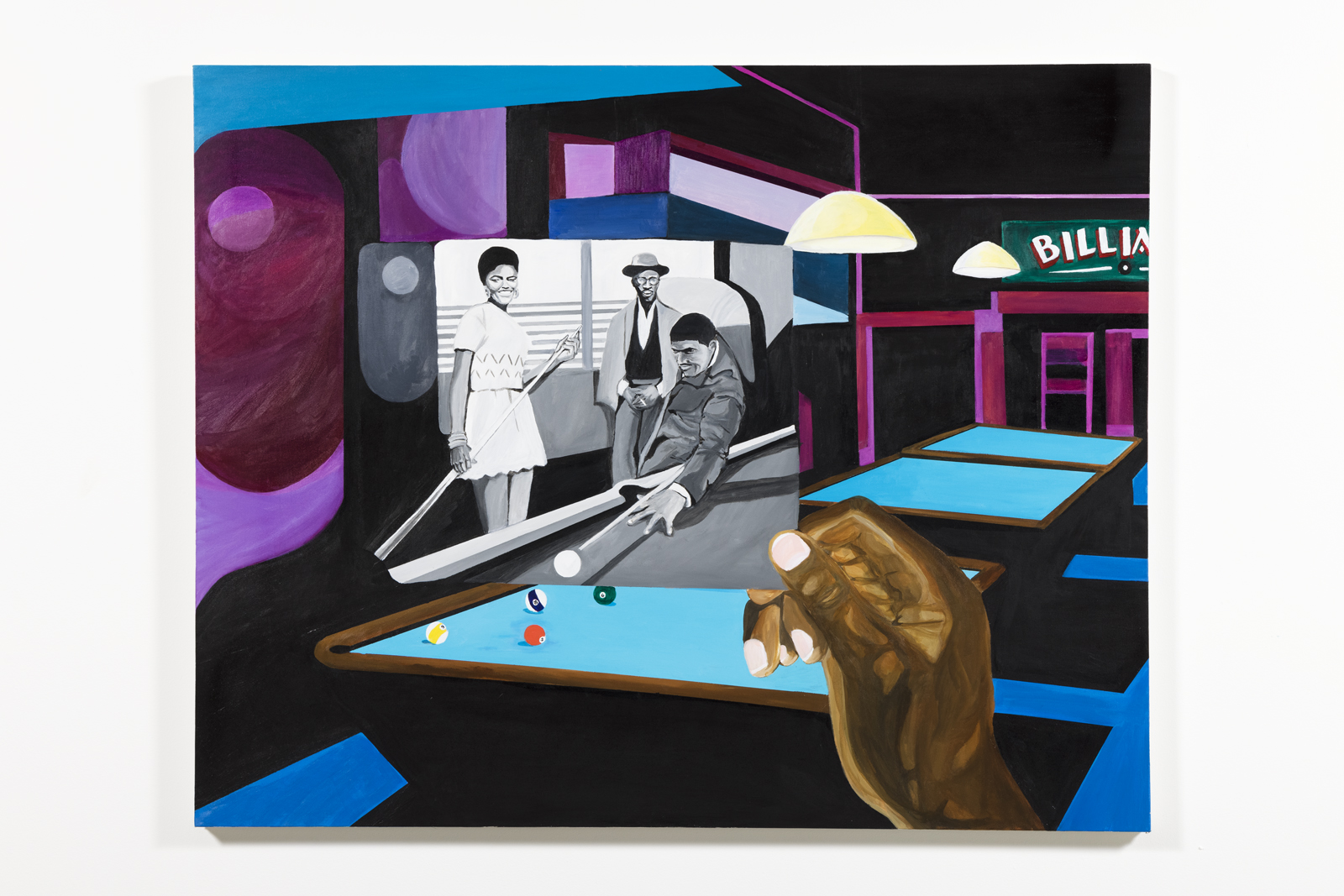 The Jam Session is presented in a separate, darkened room. Rather than hold a painted photograph within a painted background image, Bazawule excises the shape of the photo and replaces it with a screen onto which a video is projected from behind the canvas. In the present, a young Black man sits on a stool strumming his guitar in a windowless room with black walls, an ornate red and black rug. There is also an amp and a microphone. His red baseball cap is on backwards, his eyes closed as he concentrates on the music. The scene in the video is similar, yet worlds apart. Here, a cap-wearing Black man sits on a chair strumming his guitar. Who are the players, how do their sounds differ and whether they are professionals or amateurs is left to speculation. 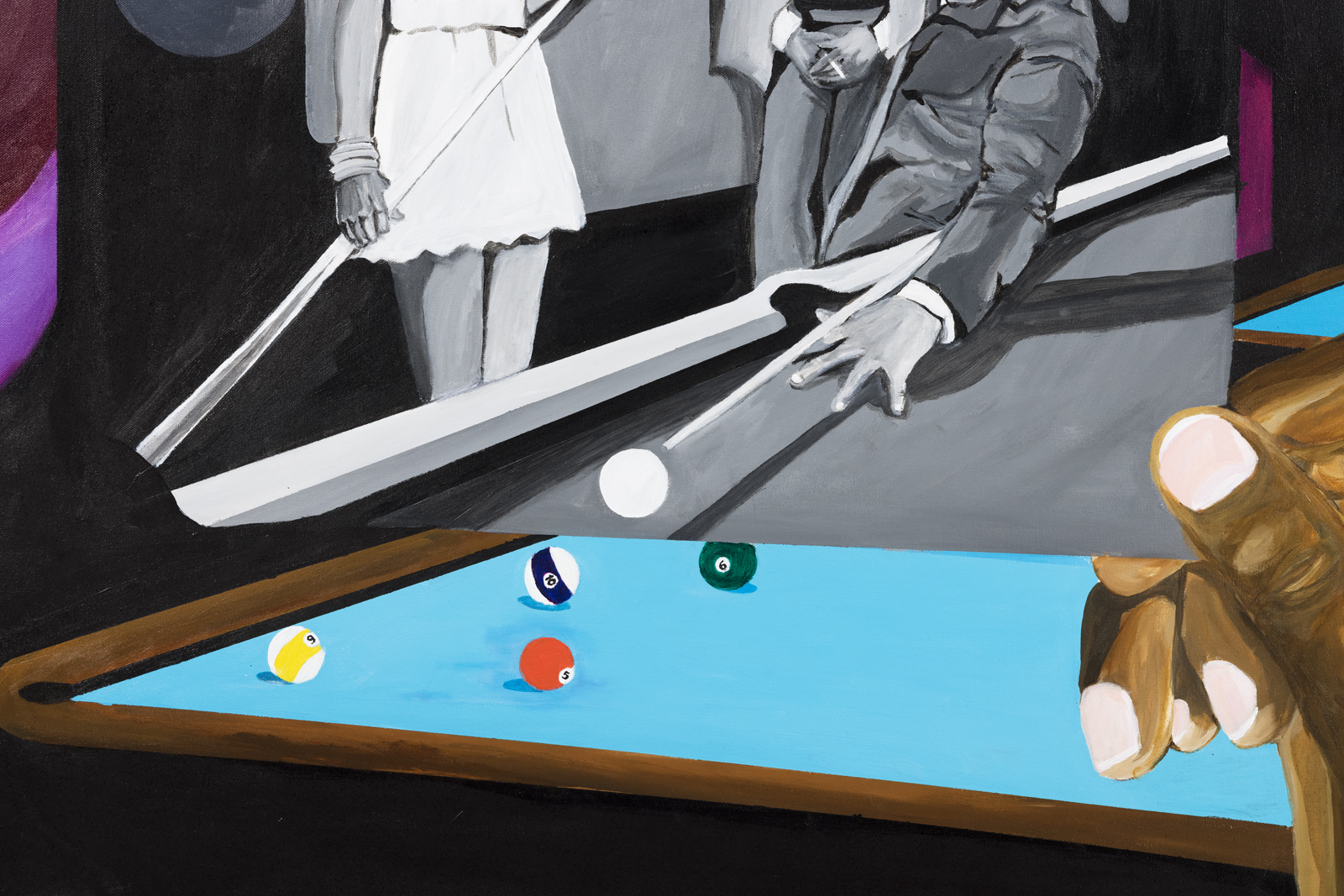 In each painting, Bazawule imagines a connection between past and present and rather than spell out the specifics of the relationships, he allows the viewer to fill in the blanks and draw on their own experiences and memories. He presents familiar locations and tender moments that are iconic in African-American history. That Bazawule has a cartoony, flat and illustrative style links his paintings to other social realists who were also interested in depicting that which surrounded them and preserving those moments in time. Bazawule looks to the past, not necessarily to understand the present but to suggest a possible trajectory from then to now.