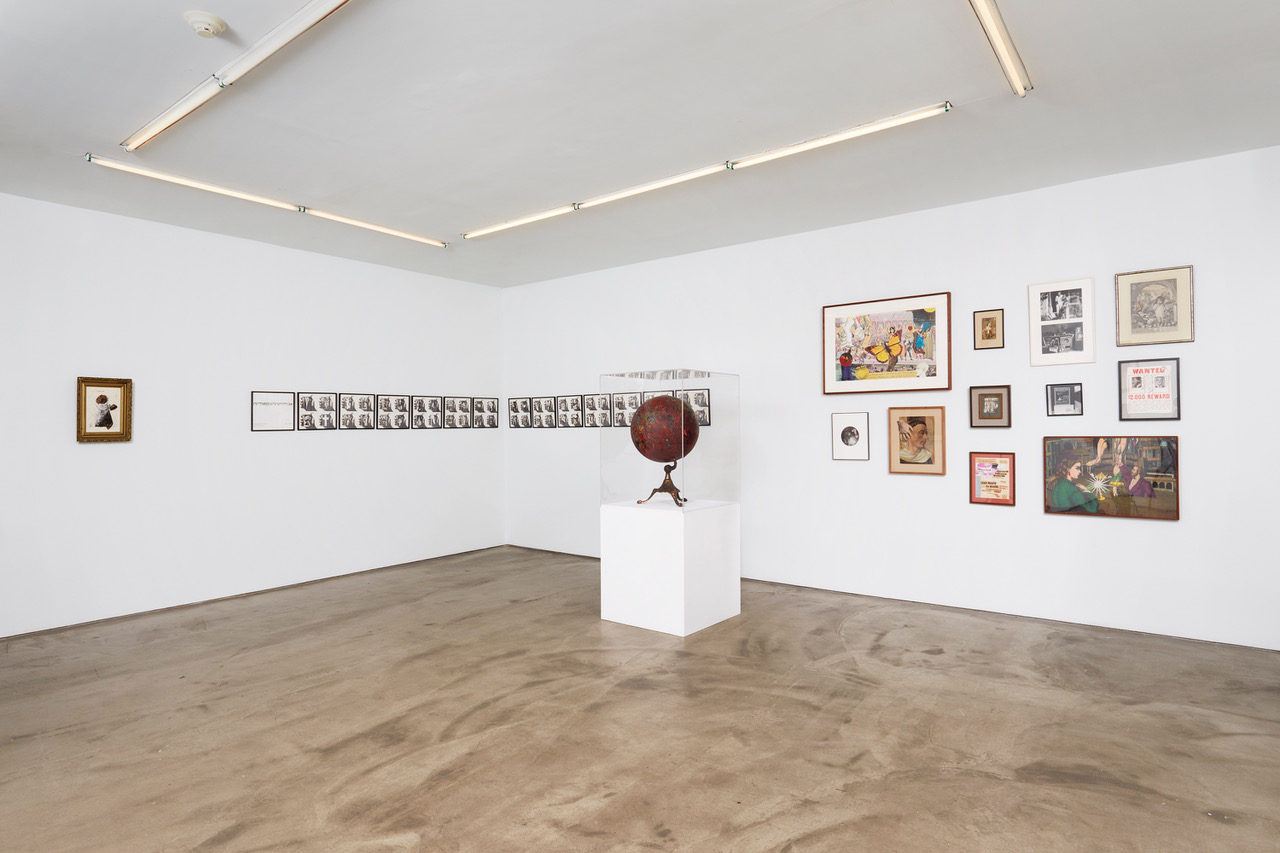 Tibor de Nagy Gallery’s new show, West Coast Collage and Assemblies, presents nine artists, all friends, who came of age and/or made their home in California. The exhibition focuses on these artists’ shared stylistic connection to collage and assemblage which emerged from a distinct nexus of American avant-garde art production from the 1950s onwards. In addition, what brings these artists closer to each other was their relationship, to one degree or another, to the locus of the group, Jess (Collins) and his partner, poet Robert Duncan and the San Francisco poetry/art scene the duo fostered. While engaged in making collage and reconfiguring found objects into assemblies, these artists were also making their own distinct bodies of work in other media, such as film, photography, painting, publishing, writing, poetry, theater and acting. It was an open and creative atmosphere, spanning northern and southern California, and it allowed for artists to thrive and bounce ideas off each other in collective and individual ways.

Helen Adam (1909-1993) was a colorful figure in the San Francisco art and literary scene. She emigrated to the US from Scotland as a young girl with her mother and sister after the death of her father. In 1954 she enrolled in Robert Duncan’s class at the San Francisco State University Poetry Center. At this time, she gained attention and notoriety for giving theatrical readings of William Blake’s poetry. She subsequently also started making collages. These works, made with a surrealist impulse, feature glamorous women and advertising images, juxtaposed with animals, dragons and other fantastical creatures. She published 12 volumes of poetry and a short story collection. A substantial number of Adam’s collage works are now housed in the Poetry Collection – University at Buffalo Libraries.

Wallace Berman (1926-1976) was an enigmatic underground figure whose collages and assemblages articulate an important strand of dark mysticism in postwar American culture. Berman was born in Staten Island and raised in Los Angeles. For a time, he took art classes at the Chouinard Art Institute, but in the end pursued an independent path as an artist.  One afternoon in 1954 on the recommendation of filmmaker Kenneth Anger, Berman and his wife Shirley Berman visited Duncan and Jess at their San Francisco apartment on Baker Street. The visit resulted in a long friendship – the two couples began an extensive correspondence of mailed collages and poems between Northern and Southern California. Berman is remembered most for his literary journal Semina and his Verifax works, an example of the latter, Radio/Aether Series, 1966/1974, the original works (pictured above) being included in the current exhibition. The Verifaxes were made from photo-collage grids of a transistor radio with photos from various sources – mythical, historical, contemporary magazines – superimposed on top. They can also include Hebrew letters and obscure, often illegible writing.

Bruce Conner (1933-2008) and Jean Conner (b. 1933) were married in Nebraska in 1957 and the very same day boarded a plane to San Francisco. The city was a natural magnet for the pair of creative young iconoclasts. Both artists began making collage and assemblies in San Francisco. Bruce used found objects and reproductions of old engravings. Jean sourced her images from popular culture and Victorian books. Around this time Bruce formed an artists group called the Rat Bastard Protective Association in which Jess was a member. The RBPA was an inflammatory, close-knit community of artists and poets including Wallace Berman, Bob Branaman, Joan Brown, Jess, Jean Conner, Jay DeFeo, George Herms, Wally Hedrick, Manuel Neri, and Michael McClure. At the end of 1961 and the beginning of 1965, the couple moved between Wichita (Bruce Conner’s hometown), Mexico City (where she gave birth to their son) and the Boston area (where they lived, for a short time, in Timothy Leary’s commune). It was in Mexico that Bruce started work on the Globe work (pictured above) featured in this exhibition. The work was brought back unfinished from Mexico and stored while the couple moved around. They eventually returned to San Francisco and settled, where Jean lives and continues to work today.

George Herms (b. 1935) is one of the founders of the West Coast assemblage movement. He makes lyrical sculptures out of found objects, discarded items and other detritus. From the onset of his career, Herms’ sculptures, paintings and drawings have operated on a poetic level, using visual puns, pop-culture references, and time-scarred material to put an expressive spin on American culture.  Herms met Duncan and Jess in Stinson Beach while working on a film with Lawrence Jordan. He says of that time “They took me in as a young practically unformed artist and I began to emulate them.” In 1962 Duncan and Jess gave Herms the “Servant of Holy Beauty Award,” complete with a hand-drawn certificate and twenty-five dollars. Today Herms continues to live and work in the greater Los Angeles area.

Jess met Robert Duncan in 1950 and they formed a lasting relationship on New Year’s Day in 1951. The household that they formed was from its beginning a magnet for a host of creative presences. Jess made his first collage The Mouse’s Tale in 1951 and he went on to make hundreds more. Jess called these works Paste-ups, a term he preferred. One of the Paste-ups in the exhibition, Goblin Pye (pictured above) was influenced by one of Jess and Duncan’s favorite books, The Princess and The Goblin, by George MacDonald, a 19th century Scottish fantasy writer. The work is composed of 12 paneled sections, and each panel contains intricate black and white collaged images, with collaged captions underneath. In one panel, a roman head appears to be perusing a book of children’s drawings of animals; there is also a sail and mast under which an angel is sleeping, to the left of this is a saw blade held up by a disembodied arm. The caption underneath, made of 1, 2 and 3 word collaged sections, all in different printed fonts, reads:

Cup he stirred the stern seasons ground to powder
therewithal something like a thimble of lemon juice. In
the bottom of the baking pot the lowest caste is a

The words in the caption are juxtaposed just as audaciously and incongruently as the collaged images.

Lawrence Jordan (b. 1934) has been at the forefront of experimental cinema, particularly through his innovative use of animation for nearly six decades. As a young man in the 1950s he left college after one year and headed for San Francisco. There he met Jess and Duncan through his high school classmate, Stan Brakhage, who at the time was living in their basement. In the late 1950s with Bruce Conner he established the film society Camera Obscura and built a 16mm experimental theater called the Movie in the North Beach neighborhood. In his long career Jordan has made over sixty films and numerous collages, two examples of which are in this exhibition. Jess and Jordan also collaborated on an important work, Heavy Water, or The 40 & 1 Nights or Jess’s Didactic Nickelodeon – a collage flipbook made by Jess that Jordan filmed and scored.

Photographer Patricia Jordan (1934-1988) made portraits of many of the major artists and poets of the Bay Area community including Jess, Wallace and Shirley Berman, and George and Louise Herms. One of her portraits is included in the exhibition picturing Wallace Berman wearing an earring made by Jay DeFeo. Jordan also made collages and like Jess used a wide array of sources such as Victorian and Old Master engravings Byzantine religious icons, Pre-Raphaelite nudes, Egyptian hieroglyphs, Aztec gods and Hindu deities. She also would incorporate embroidery, feathers and her own photographs into these works. The Jordans were very close to Jess and Duncan and liked to spend time with them at their Stinson Beach cottage.

Although known as one of America’s most intriguing character actors, Robert Dean Stockwell (b. 1936) has long had an alternate career as a maker of lyrical and piquant collages and assemblages. Stockwell met Wallace Berman in 1955 and was introduced to an alternative world of art and poetry and encouraged to make collage.  Stockwell says of this time, “My life began to shape itself after meeting Wallace, seeing his art and understanding what that art meant. Ever since then, my life has been a flow to art. Berman had a phrase, ‘Art is Love is God.'” During this time Berman took Stockwell to Jess’s studio where he bought several works. Stockwell returned to acting in 1959 but continued to make art, one of his works appearing on the cover of Semina 8 in 1963; and in the late 1960s he made films of George Herms working in his studio.

Hours for July and August, Monday to Friday 10-6pm