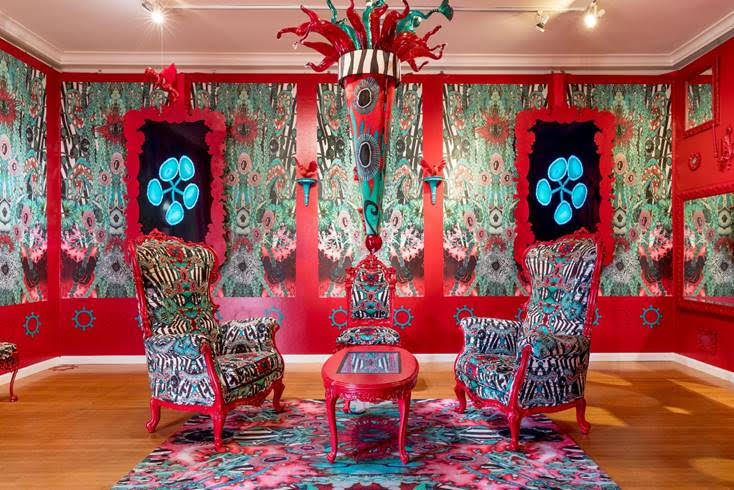 “Hysteria” is Maui-based artist Cudra Clover’s museum-wide exhibition currently on view at the Lancaster Museum of Art and History (MOAH) in Lancaster, CA. Hysteria is an expansive, multimedia three-part show that comprises large format silk paintings, the immersive installation “Hysteria Room,” and the audience activated audio and visual experience “Hysterical Women,” that presents its subjects in various and nuanced states of hysteria.

The confluence of artworks and technologies in the show was inspired by modern life’s bombardment of technology, social media, ubiquitous computing, and the expectation of immediate gratification. Clover says, “Everything seems to be speeding up, growing out of balance and going crazy.” As a result of this influx of activity, she intended to call the project “Overstimulated.”

However, when creating the components of the exhibition, she became gravely ill with a female problem that induced copious bleeding. Her Western medical doctors recommended hysterectomy, offering no other options. Only in her 40s, Clover felt there must be another solution, and she began alternative treatments.

Fully recovered, she has become an activist of sorts – though never intending to do so – for women in similar positions. Because of her personal experience, “Hysteria” became the title. The word not only captures the commotion of the times, but is also rooted in its controversial history as a woman-specific disease. Hysteria is not just a reaction, but a statement on the frustrations of neglected aspects of femininity.

At MOAH, Hysteria’s three interrelated movements occupy the main gallery on the ground floor, and two galleries on the second level of the museum:

Part one, located in the main gallery, consists of a curated display of Clover’s silk paintings of biomorphic abstracts inspired by nature and microscopic life. Clover describes this work as creating new worlds on a microcosmic level. Mixing science and art, she researches pandemics, viruses, water, genetics, and plant cells. In her process, she uses the Japanese fabric dyeing technique rozome, elements of the Indonesian method of wax-resist dyeing, batik, and aspects of French Serti, in which painters outline their designs on silk with gutta or water-based resistance.

Elements of Clover’s biomorphic silk paintings were subsequently digitized, morphed, and animated, then used to create the rest of Hysteria. They comprise all the textiles and wallpaper in the Hysteria Room, as well as the touch screens where guests can select various pieces of the imagery and compose their own art.

Part two is Clover’s installation of the Hysteria Room, which features a mix of antique, baroque furniture previously owned by a bankrupt billionaire. Inspiration for the room came from a magazine article featuring a photograph of the previous president and his family seated upon gold gilded furniture. The article reminded Clover of another time of excess and imbalance in history, the late 1780s, when Marie Antoinette infamously pronounced “let them eat cake,” exposing her privilege to enjoy eating sweets while commoners starved.

Part three located in the south gallery is the all-new interactive sound and video installation titled Hysterical Women. Completely altering the gallery space, Hysterical Women consists of a changing projection of multiple women in various states of hysteria. This installation marks the first showing of Clover’s latest work. A console of interactive buttons allow visitors to select any of the women to make them appear, fly them around the room, and activate sounds. Three of the buttons splash the room with a virtual flood of red liquid (blood), blue liquid (water), and an engulfing red whirlpool.