John Baldessari: ‘The Space Between’
Encoding and Decoding the World Around Us

The final works by the late John Baldessari (1931-2020) on view at Sprueth Magers are a series of inkjet prints on canvas that juxtapose selectively painted photographs culled from his vast archive of movie stills and press images. They include text that examines specific relationships imposed on the images by Baldessari’s alterations. While the thirty paintings appear to be variations on a theme, Baldessari cleverly and with wit, uses what is depicted, as well as what is no longer visible in the artwork as a forum for questions about what we see and where we look. He remarks, “When you’re looking at two things, don’t look at them, look between them . . . The space between two things, that’s very important.” 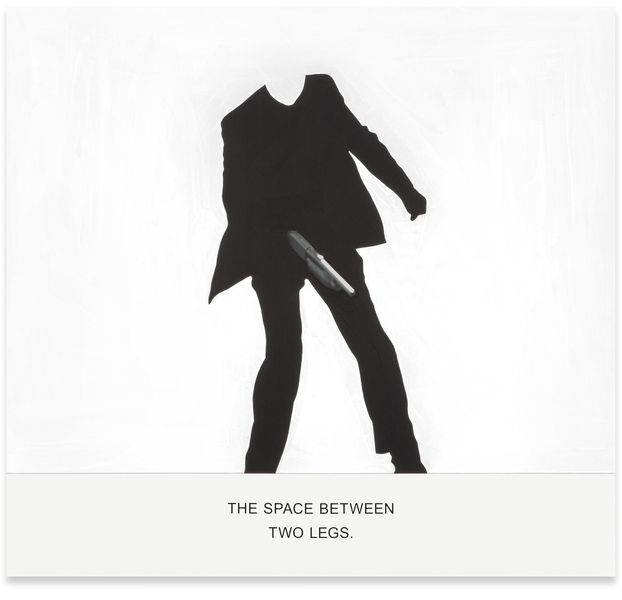 The Space Between Two Legs. 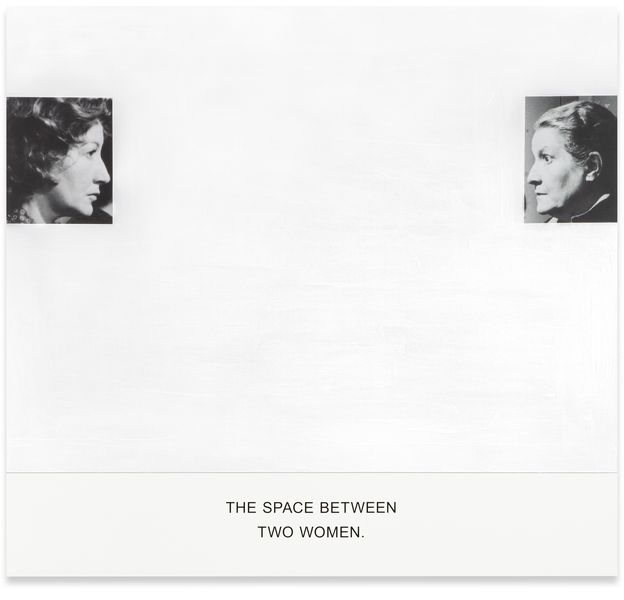 The Space Between Two Women.

In some of the canvases the background has been removed. In others, the figure was painted out, while in a few, Baldessari has cropped aspects of the picture into rectangles that float in a field of white, as in The Space Between Two Women. Here, the heads of two women contained within separate rectangles, face each other from opposite sides of the canvas. The Space Between Two Heads. is also a mostly blank white canvas. Here, Baldessari removes from the original movie still all but the hair of two figures, one male and the other female, as well as a gun that occupies the space between their heads. While the woman’s hair retains its photographic veracity, the male’s hair has been painted black to match the gun that is held by the woman and pointed at his face. One can imagine the scene and extrapolate potential outcomes. Yet Baldessari pushes it further, asking us to think about the difference between fact and fiction, reality and representation, or even life and death. 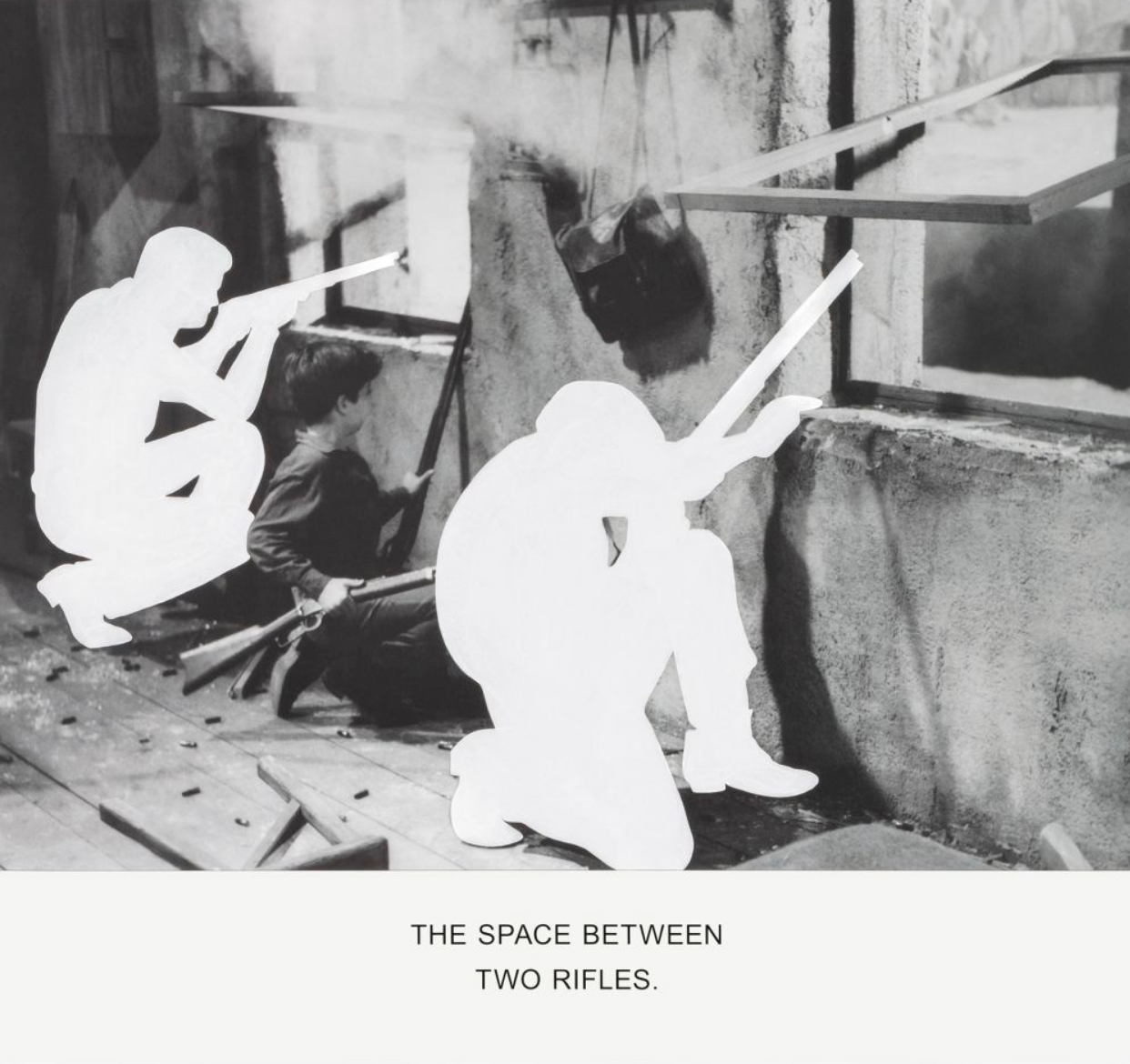 The Space Between Two Rifles.

The Space Between Two Rifles. is a chilling work. In this piece, Baldessari paints out in white the silhouettes of two gunmen who are posed and ready to shoot through open windows. The rest of the black and white image is intact and depicts an interior space with empty shell casings on the floor. Between the two silhouettes is a young boy holding two rifles. Baldessari plays with ideas relating to presence and absence, calling attention to the space between the two men, the space between the two guns the boy holds, as well as the space that exists outside the open windows. 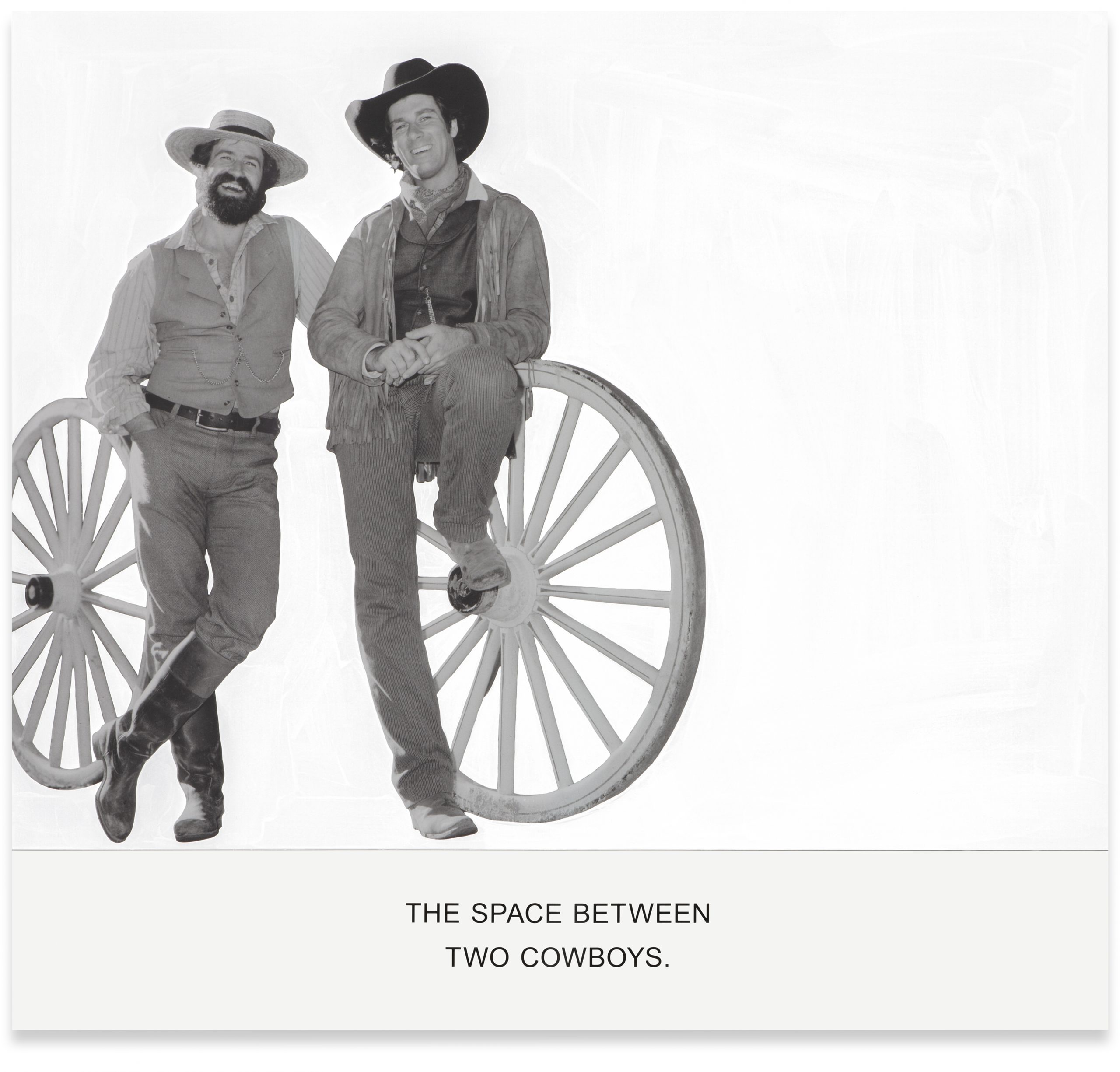 The Space Between Two Cowboys.

The Space Between Two Legs. is empty. All that remains in the image is the blackened shape of a headless male figure who holds a long gun as if ready to shoot at an invisible enemy. The space between his two legs is triangular. What once was there has been obliterated, as is everything that surrounds him. It is easy to imagine a scenario as gunmen are abundant in films, but Baldessari wants to call attention to that which is missing, which could be just about anything. 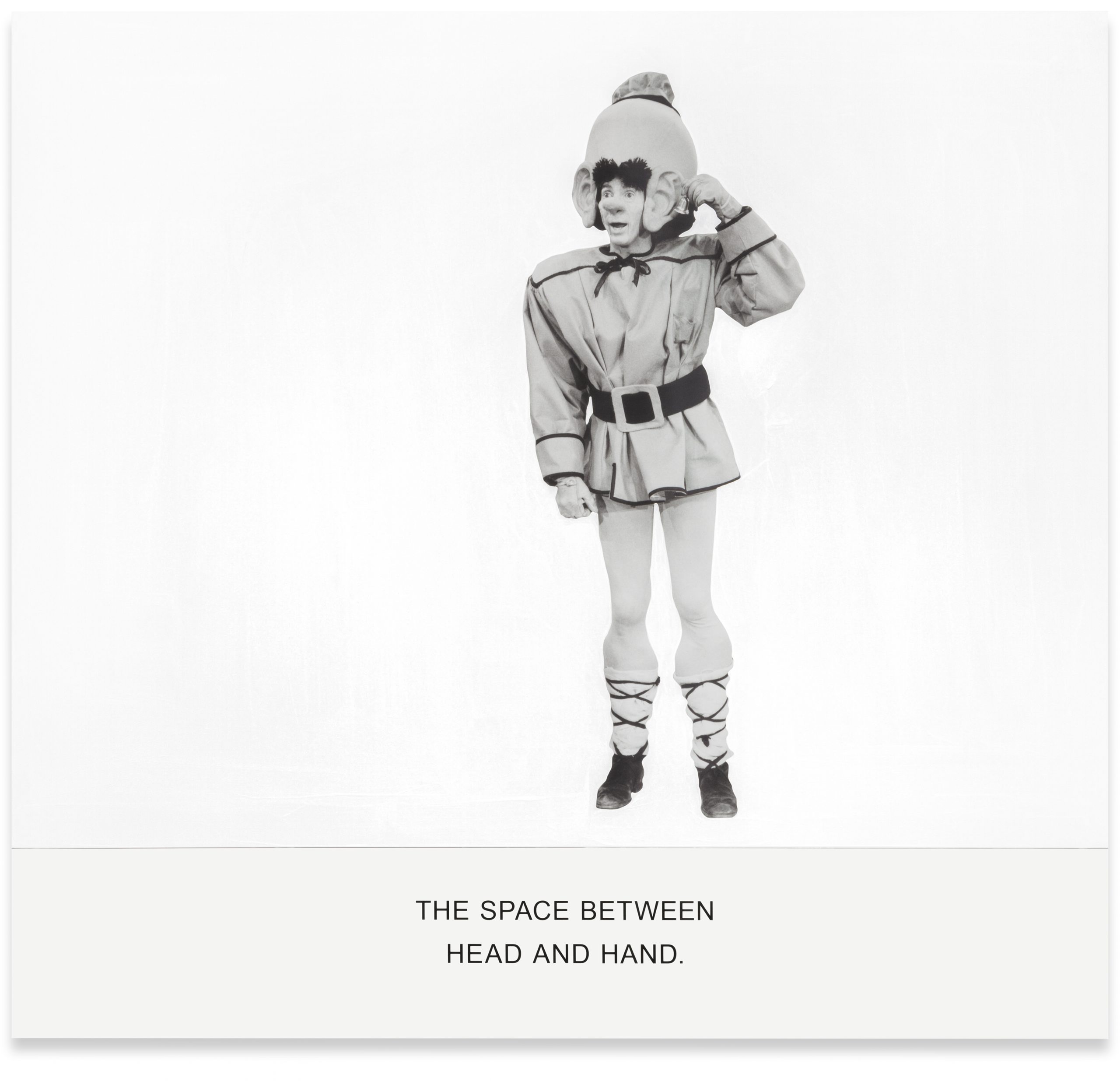 The Space Between Head and Hand.

Throughout his long career, Baldessari cut apart and reassembled appropriated imagery to call attention to what was there, as well as to what was not. He purposely made images that were ‘wrong’ to point out photographic faux pas and excelled in creating meaning from seemingly random juxtapositions. Through his works, he questioned the relationship between painting and photography, words and images, fiction and reality, audience and creator, past and present, mind and eye. Yet, for Baldessari, nothing was random. The works in The Space Between are carefully constructed commentaries on art, film, history and life. They explore “how we encode and decode the world around us” with visual acuity and ironic wit.