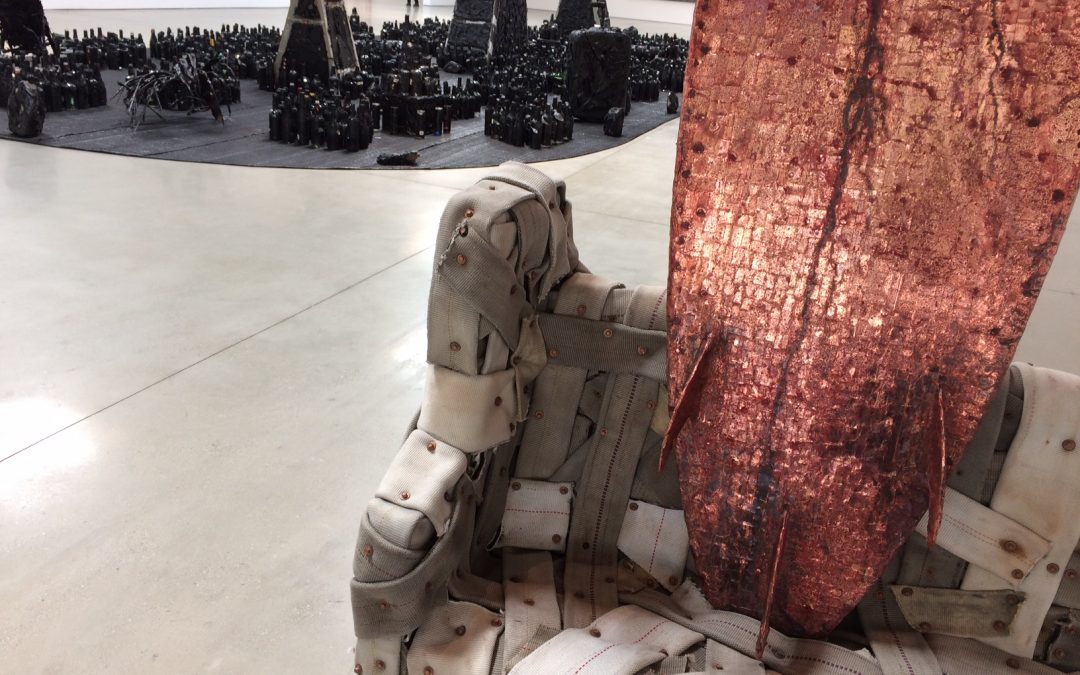 Say Can You See

Nari Ward is a Jamaican-American artist based in New York City who makes mixed media works from recycled and found materials. These pieces address social and political issues about class, race and consumer culture in challenging and unexpected ways. Ward has exhibited nationally and internationally since the early 1990s and is included in collections world-wide. It is surprising that he has not yet had a solo exhibition in Los Angeles, so the installation Say Can You See at Jeffrey Deitch serves as the city’s introduction to his multifaceted and remarkable practice. On view are large-scale works created between 1993 and 2021, including historic early sculptures like the room-sized Exodus (1993), a mixed media installation where Ward used tires, wheels, boxes, firehoses and drywall screws to construct rectangular bundles that contain discarded clothing, objects and toys— items that could have been left behind by refugees or those forced to relocate due to gentrification. 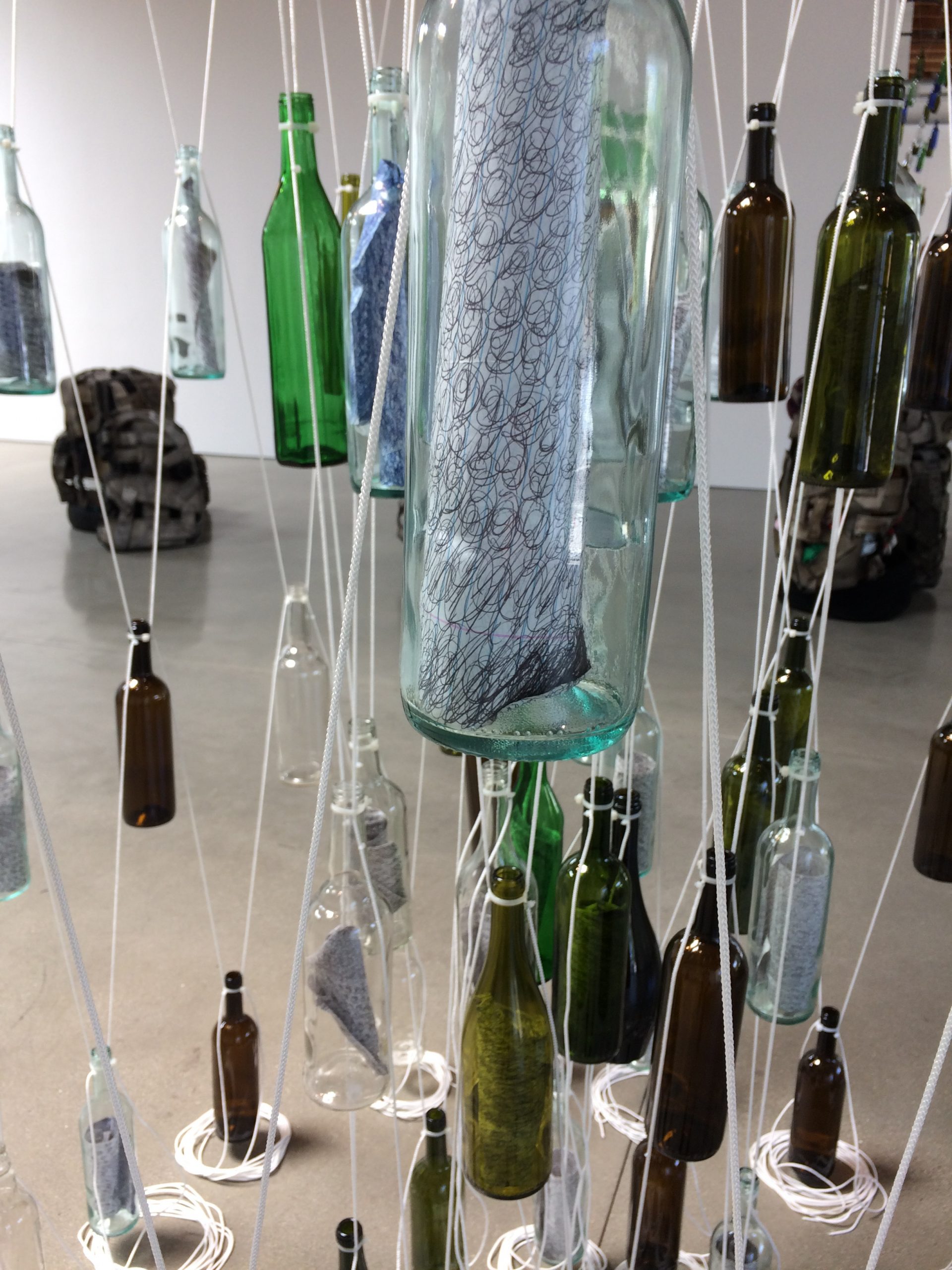 Another striking early work is the large-scale Iron Heavens (1995) that extends onto the floor and consists of a wall-mounted montage of overlapping porcelain enamel broiler pans, below which lean burnt baseball bats adorned with cotton balls that have been transformed into small amulets. The elements in this construction are juxtaposed into a beautiful sculpture that references destruction and healing simultaneously. 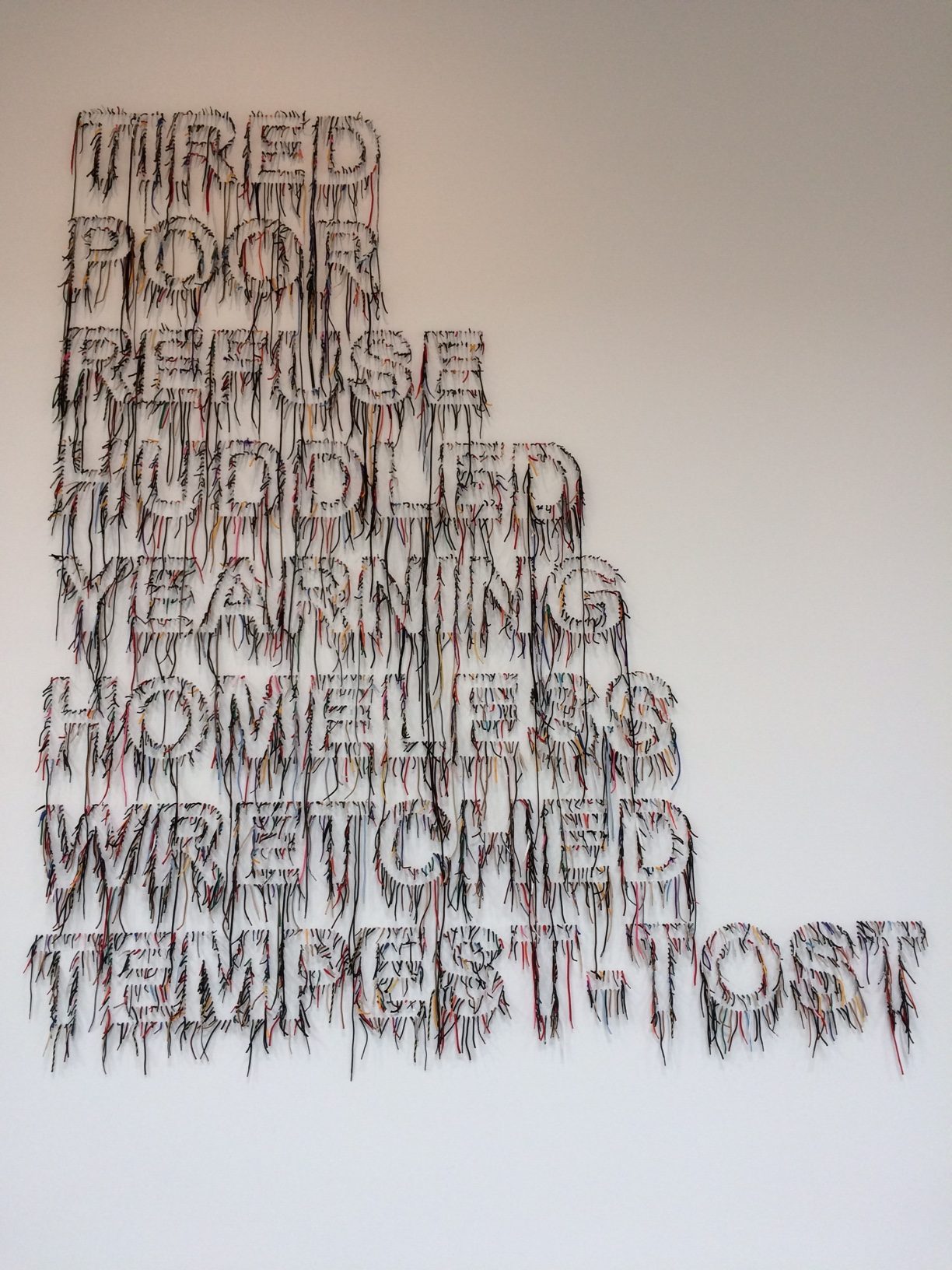 In Bottle Whisper (2006), Ward suspends different colored empty bottles from the gallery ceiling. They are tied together with white string that is nicely coiled on the floor around disparate bottles that are also placed there. Many of the bottles are filled with drawn messages— pieces of paper covered in doodles and scribbles. The work evokes bottle trees, (an African-derived tradition) as well as the sending of messages in a bottle. 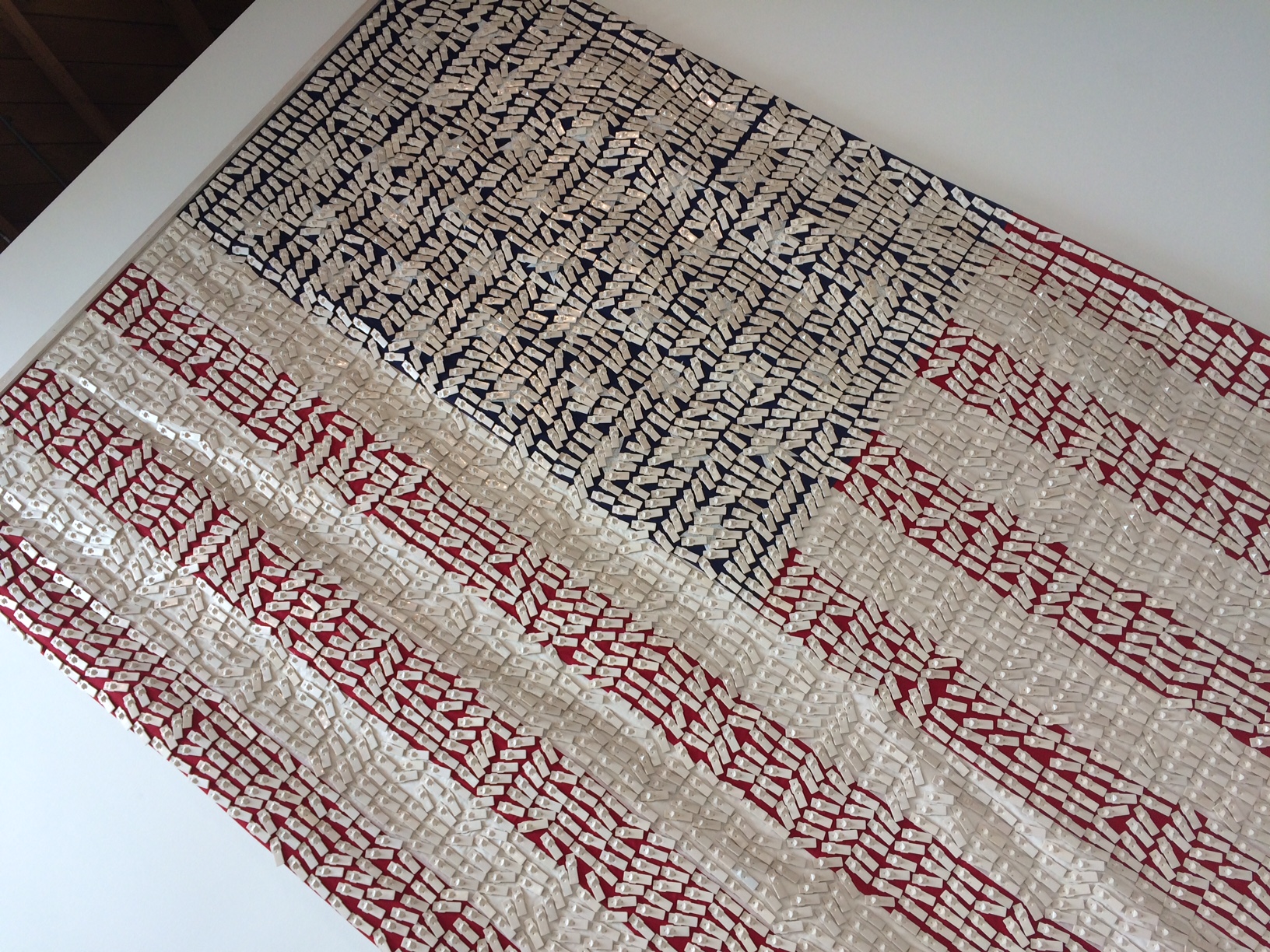 Say Can You See

Drawing viewers toward another sculpture, the sound from Glory (2004) fills the vast gallery space. Glory is a juke-box / light-box made from oil barrels that have been joined together and then split in half to open like a coffin or tanning bed and filled with backlit images of the stars and stripes from the American flag. The looping soundtrack is a word tutorial for parrots. To access the work, one must meander through a barrier of white towels decorated with a rubber roofing membrane held in place by home-made stanchions consisting of poles placed in cement filled paint cans. Continuing the flag theme is Say Can You See (2021). Here, Ward has attached six-thousand security tags to a huge American flag that drapes down from high on the wall to the floor. Using tags —like those that are often attached to clothing in chain stores to prevent theft— Ward conflates ideas about national security and corporate capitalism in this impressive and poignant piece. 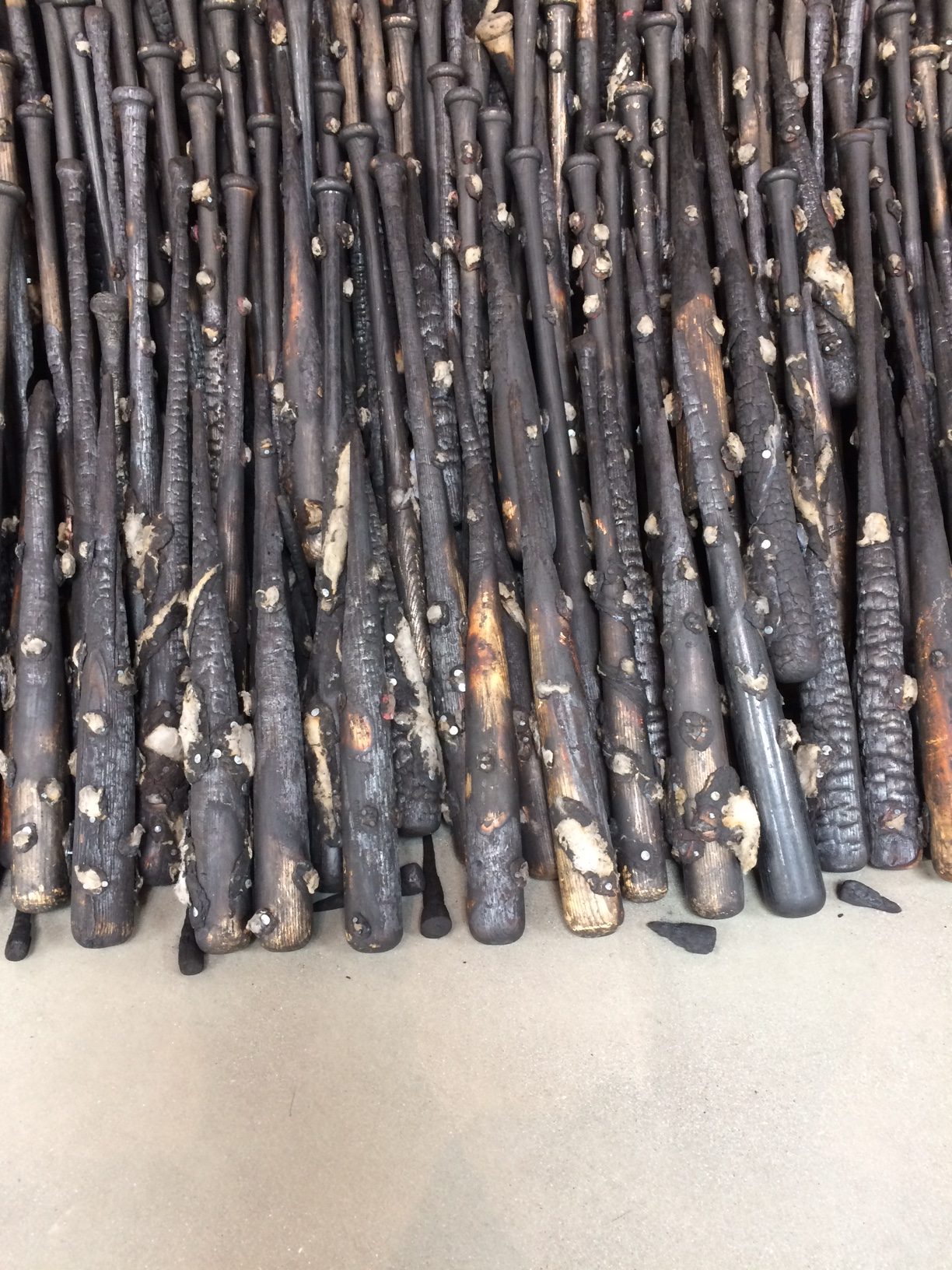 Roll, Jordan, Roll (2021) is a wall-work where the phrase ‘Roll, Jordan, Roll’ is spelled out using shoelaces inserted through holes in the wall. The piece references both the basketball star Michael Jordan and a spiritual created by enslaved African-Americans. In Lazarus (2019), he also uses shoe laces to spell out specific words from poet and activist Emma Lazarus‘ 1883 sonnet that appears on the base of the Statue of Liberty. In Ward’s work, the text now reads: Tired, Poor, Refuse, Huddled, Yearning, Homeless, Wretched, Tempest-tost. Again, Ward offers commentary on the state of immigration and immigrants’ continual struggles for safety and acceptance. 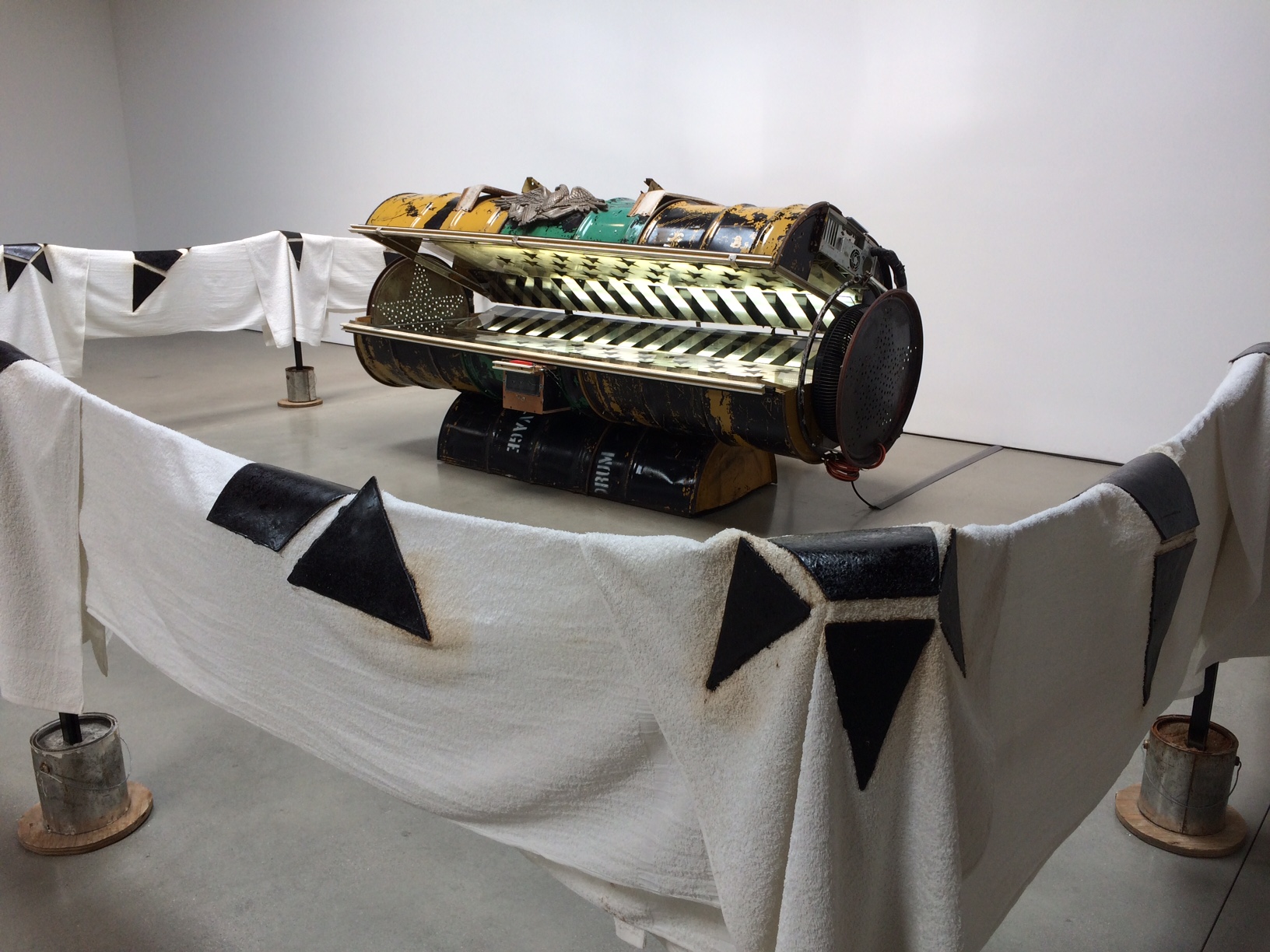 Say Can You See is a challenging and thought-provoking exhibition that illustrates the breadth and inventiveness of Ward’s work. One has to marvel at his innovative use of materials and the way he crafts beautiful objects from detritus. Ward often draws from the past— be it through both historical texts and found objects to reframe and represent that which has been discarded, left behind or deemed useless.