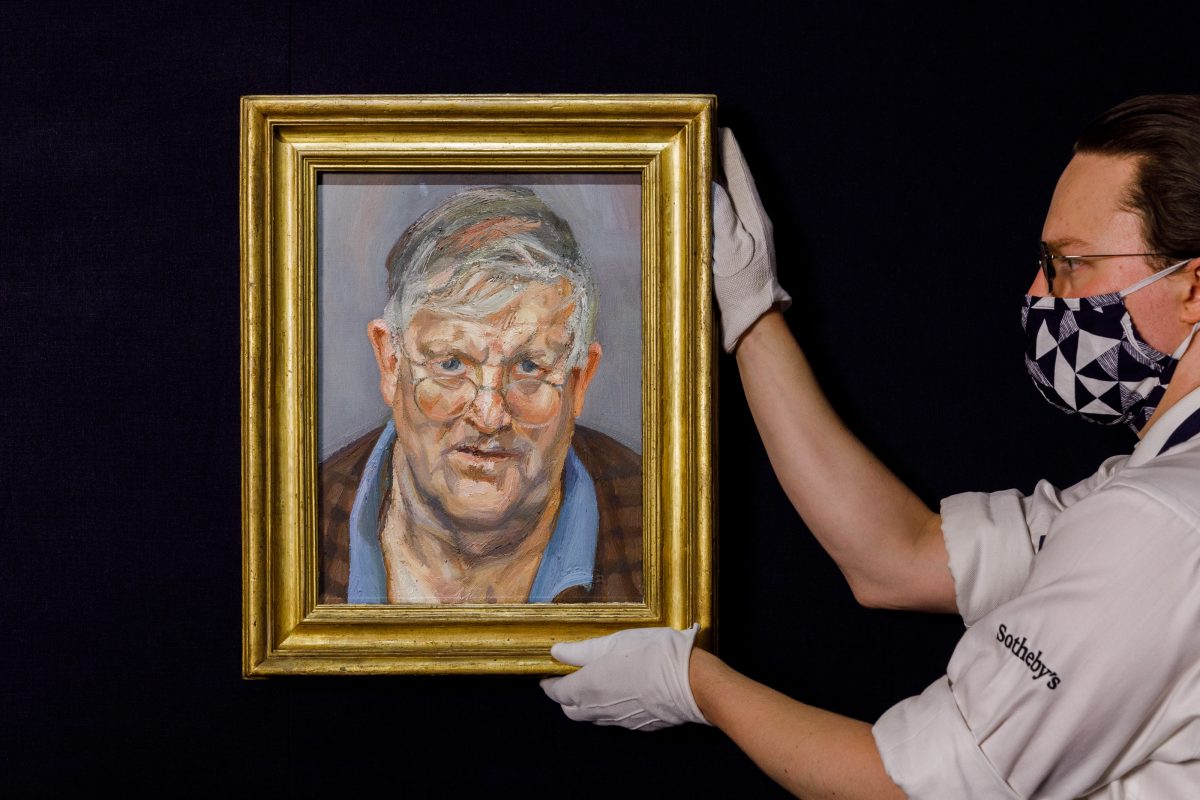 A portrait by the English figurative painter Lucian Freud depicting his friend David Hockney has sold for £14.9 million ($20.7 million) with buyer’s premium at London’s Sotheby’s. The painting becomes the sixth-most expensive work by Freud to sell at auction.

Phone bidders from New York, London and Asia competed for the work, which saw the hammer fall at £12.8 million ($17.7 million), putting the lot at just above its £12 million ($16.6 million) high estimate. It went to a collector based in London bidding on the phone with Sotheby’s London contemporary art specialist James Sevier.

Sotheby’s told the following story: During the spring and summer of 2002, two titans of British art came together in a private exchange between artist and sitter. After more than a hundred hours of sittings, the result was one of the most masterful peer-to-peer portraits ever committed onto canvas. Painted at the height of Lucian Freud’s career, this portrait of David Hockney provides a fascinating window into the narrative of a long episodic friendship that had started forty years earlier. Created in the months leading up to Freud’s critically acclaimed retrospective at Tate Britain, the painting speaks to the shared history and mutual respect between the eminent artists. Unseen in public since Freud’s 2012 exhibition at the National Portrait Gallery, it will appear at auction for the first time as the major highlight of Sotheby’s British Art Evening Sale: Modern/Contemporary in London on 29 June 2021, when it will be offered with an estimate of £8,000,000-12,000,000.

“It is hard to think of two greater British artists who are as both critically and commercially acclaimed than Lucian Freud and David Hockney. In this magnificent portrait we bear witness, not only to the enduring relationship of these two eminent masters but, moreover to, a tour-de-force of portraiture. Quite simply, his portrait of David Hockney is a masterpiece – a sublime testament to the measure of Freud’s uncompromising scrutiny and ability to capture the mood and the inner essence of his sitters.”

The two artists first met in 1962 through the Guinness family, Hockney later acknowledging that “Lucian was very famous even at the time I was still a student”. By the time Freud sat down to paint his friend in 2002 he was almost 80 years old and Hockney was aged 65. Freud was considered Britain’s greatest living painter, while Hockney was among the most influential British artists of the 20th century (recently the subject of major retrospective exhibitions in Europe and the US). Just over a decade earlier, in 1990, he had turned down a knighthood, on the grounds that he didn’t ‘care for a fuss’.

Every day of those four months in 2002, Hockney would walk through Holland Park to Freud’s flat: “sometimes I was early, and he would leap up the stairs two at a time. No slouch at eighty. He never wanted to be seen as inactive”. Arriving around 8.30am each morning, the sittings started with a cup of tea brewed by Freud on a grease-covered stove. “I liked the old-fashioned bohemia of it all. The plates with old beans on them from the last night, or even last week, it was like student days, very appealing, very appealing after all those very clean New York lofts. I told him you can’t have a smoke-free bohemia by definition. He let me smoke – ‘Don’t tell Kate Moss’ was his request”.

The sittings provided a meeting of minds that spanned decades of shared admiration, and for Hockney it was an illuminating experience. He found Freud’s technique fascinating, the older artist’s refusal to pre-mix colours to speed up the process a deliberate ploy to afford him as much time with his sitter as possible. As a result, conversation between the two artists flowed freely: “Lucian’s talk was always fascinating. Sometimes it was just gossip about people we both knew, very amusing, very good put-downs that made me laugh. But we talked about drawing a lot. Rembrandt, Picasso, Ingres, Tiepolo… We talked a lot about Rembrandt drawings and how everything he did is a portrait, no hand or face is generic”.

John Baldessari: ‘The Space Between’

Nari Ward: ‘Say Can You See’

Takashi Homma: ‘mushrooms from the forest’

Dani Tull: ‘Take a single letter from the stream’