Takashi Homma: ‘mushrooms from the forest’
Engaging With the Dualities of Nature 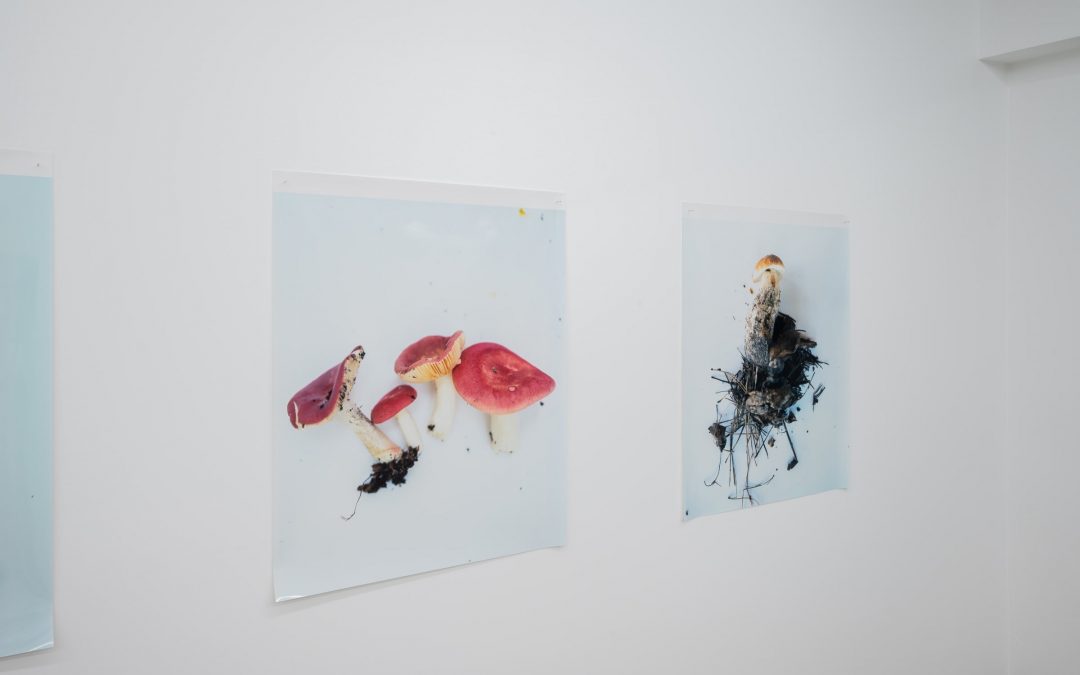 mushrooms from the forest

Takashi Homma is a Japanese photographer (born in Tokyo in 1962) who has worked professionally for advertising agencies, as well as for magazines like I-D in London. Artistically, he is known for his artist’s books, many of which pay homage to the artist Ed Ruscha, as well as photographic series that document youth culture in Japan where he looked both objectively and expressionistically at his surroundings. For his first Los Angeles exhibition, Homma presents mushrooms from the forest, a body of work consisting of photographs of mushrooms from Scandinavia and Stony Point, New York that complement pictures taken near the sites of the Fukushima (2011) and Chernobyl (1986) nuclear disasters. 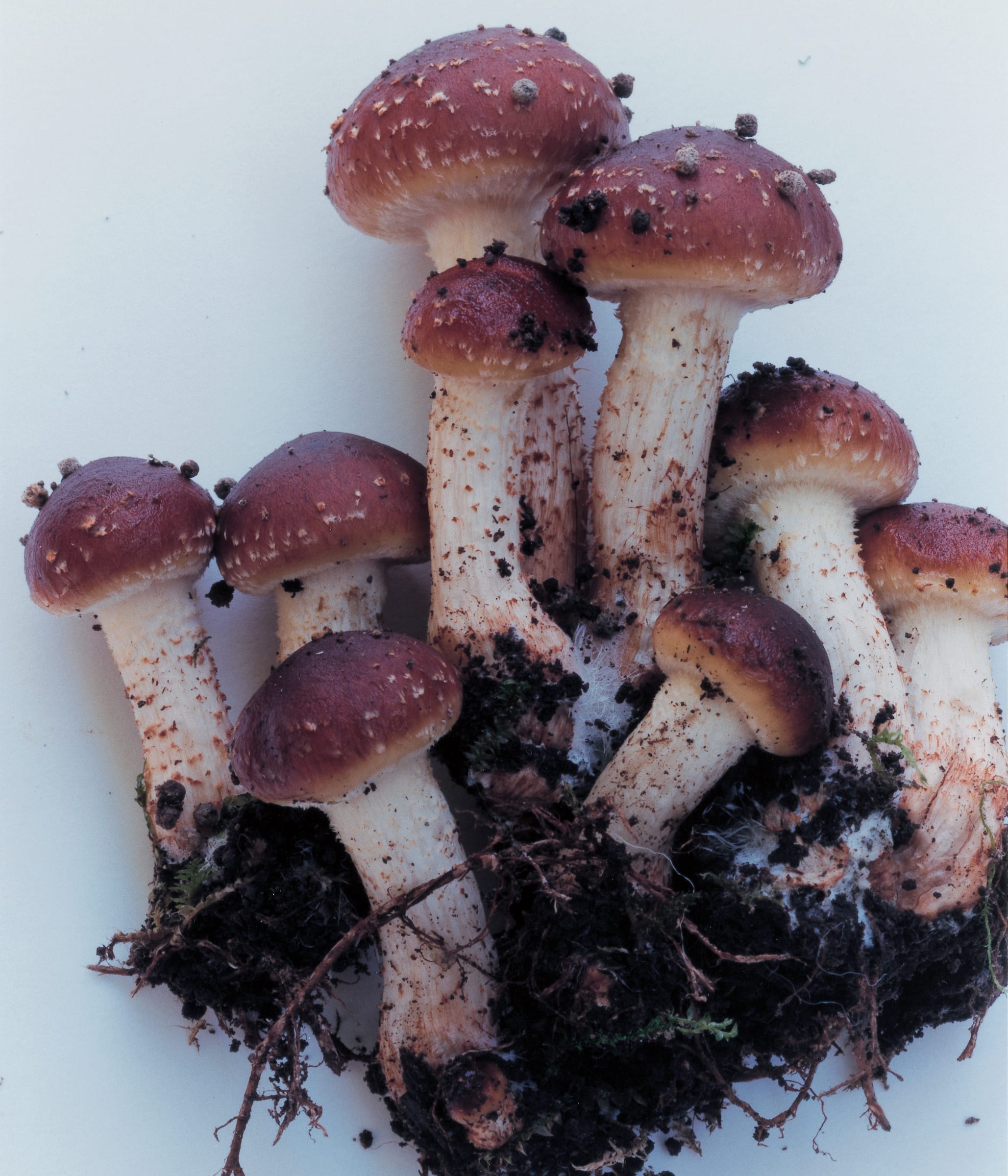 Mushroom from the forest #18

Six months after the accident in Fukushima, Homma began visiting the area to make photographs of mushrooms in situ. He would carefully excavate distinctive specimens from the ground and place them on a white backdrop he carried with him to set up a makeshift studio. Shooting with natural light in less than pristine conditions, Homma treated each mushroom with respect as if making a portrait of a person, capturing its uniqueness and personality. It is impossible to know what level of contamination, if any, penetrated any given mushroom and the surrounding leaves and dirt, yet Homma’s larger than life photographs allude to there being something wrong or off with these fungi. 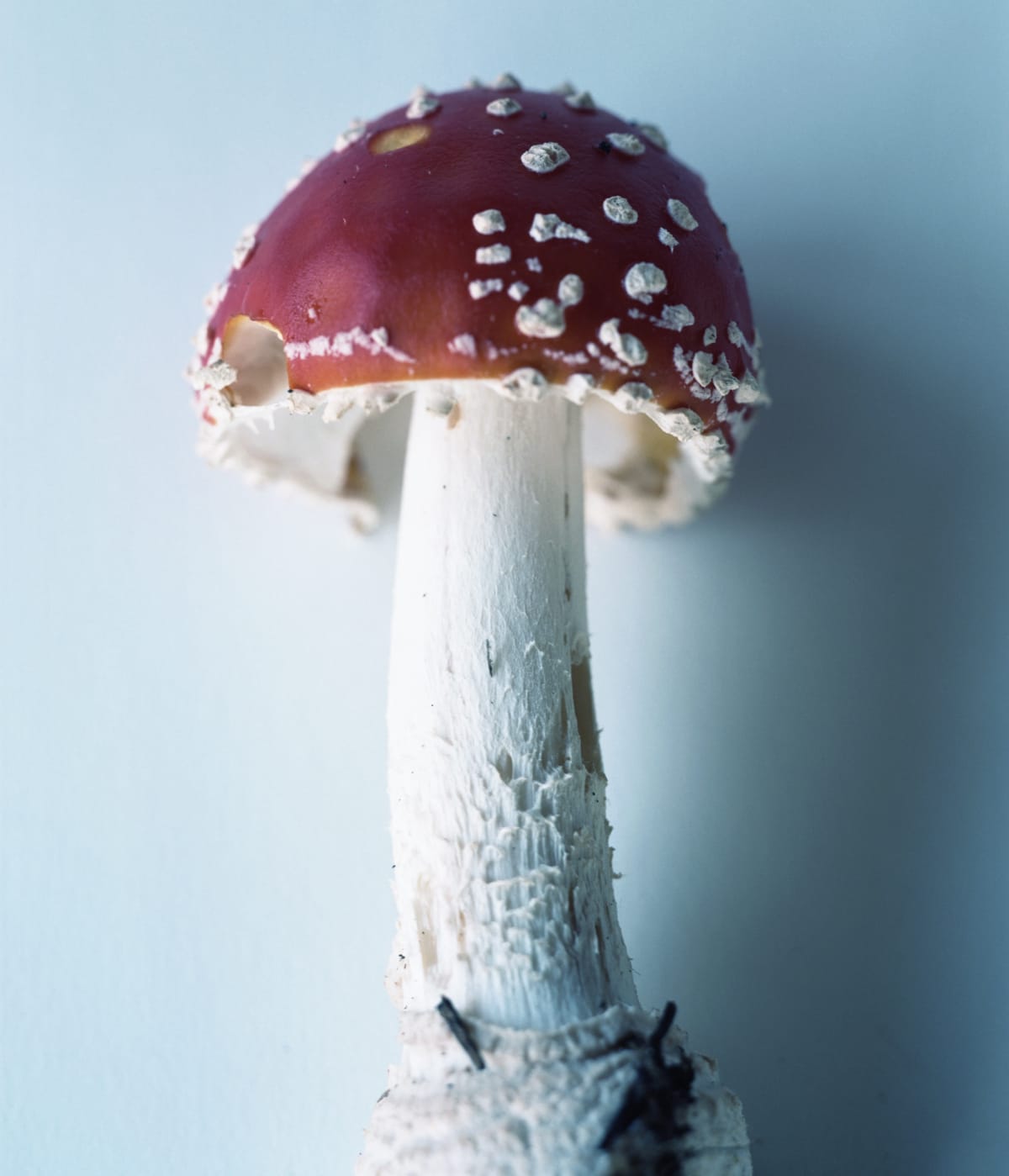 Is the slimy glaze that covers the heads of the mushrooms in Mushroom from the forest #15 (2011) due to the nuclear accident, or is this how this variety always looks? The black brown coloration of Mushroom from the forest #13 (2011) gives pause, as does the cluster of brown/red capped mushrooms whose heads are covered with small, rounded protrusions in #18. Homma’s photographs of mushrooms from Chernobyl taken more than 25 years after the event, are caked with dirt and encased in debris. That life —albeit it in the form of potentially poisonous mushrooms— can spring from this barren soil is something Homma celebrates, yet is also wary of. Who would eat, yet alone touch the damaged cap and pocked-mark stem blanketed with black dirt in Chernobyl #12 (2017). 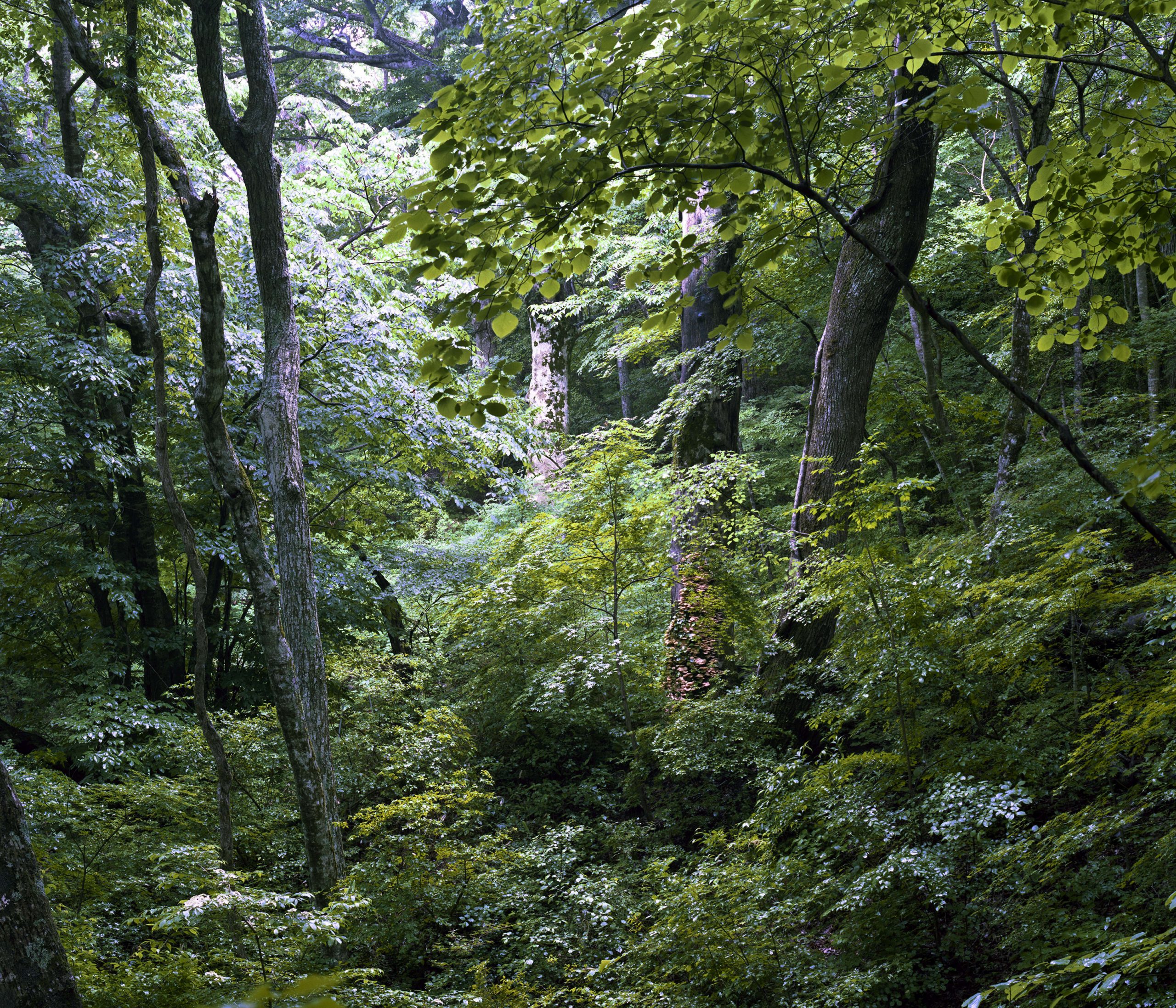 To provide context, Homma includes a few photographs of the forests where the mushrooms were found as part of the exhibition. Fukushima #1 (2012) for example, depicts a rich, lush green landscape, whereas Scandinavia #10 (2015) shows an environment of leafless trees and broken branches. In addition to making pictures around Fukushima and Chernobyl, Homma also photographed mushrooms in Scandinavia (noting that just under 70% of the available land in Scandinavia is covered with forests) and Stony Point, New York, which was the noted avant-garde composer and mushroom aficionado John Cage‘s place of residence for over 16 years. That Cage had a passion for mycology inspired Homma, as did the artist’s books of Ed Ruscha — specifically Ruscha’s book, Colored People (1972), which was a book with an ironic and charged title, filled with images of cacti framed against a blank white background. 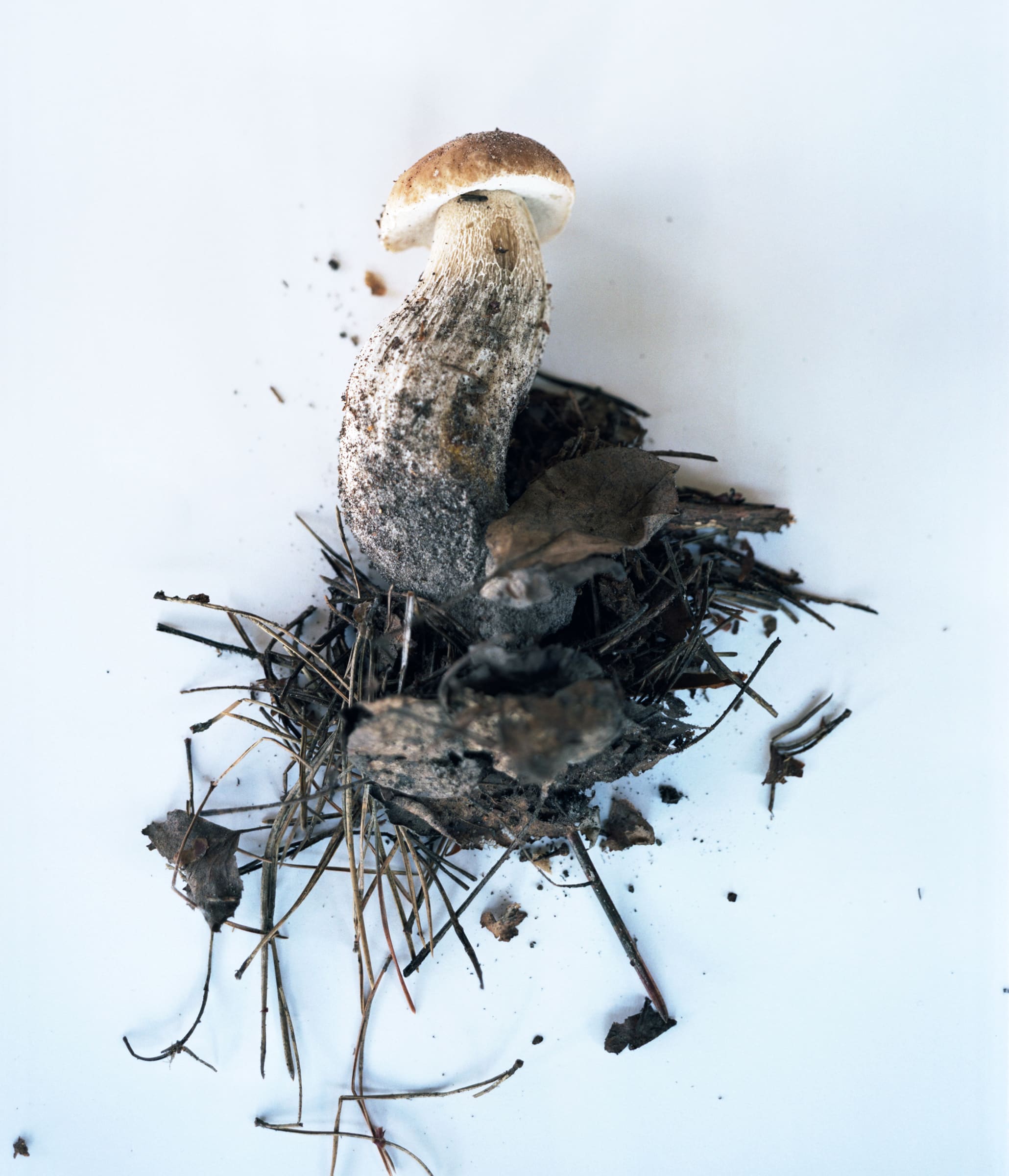 Why mushrooms? Mushrooms are mysterious. They can be toxic or poisonous. They are often phallic-shaped. They can be hallucinogens. They are symbolic— as in the mushroom clouds of another man-made nuclear disaster. They also have an exotic appeal. By documenting mushrooms and their forests, Homma engages with the dualities of nature: the forest as an open ended, ever changing expanse and the mushroom— an anomaly that continues to thrive and grow even in radiated environments. mushrooms from the forest can be seen as a straightforward photographic exhibition featuring pictures of mushrooms, yet upon close examination and with a bit of thought, it turns out to be so much more.