Dani Tull: ‘Take a single letter from the stream’
Drawing From Personal Memories, Objects and Past Artworks 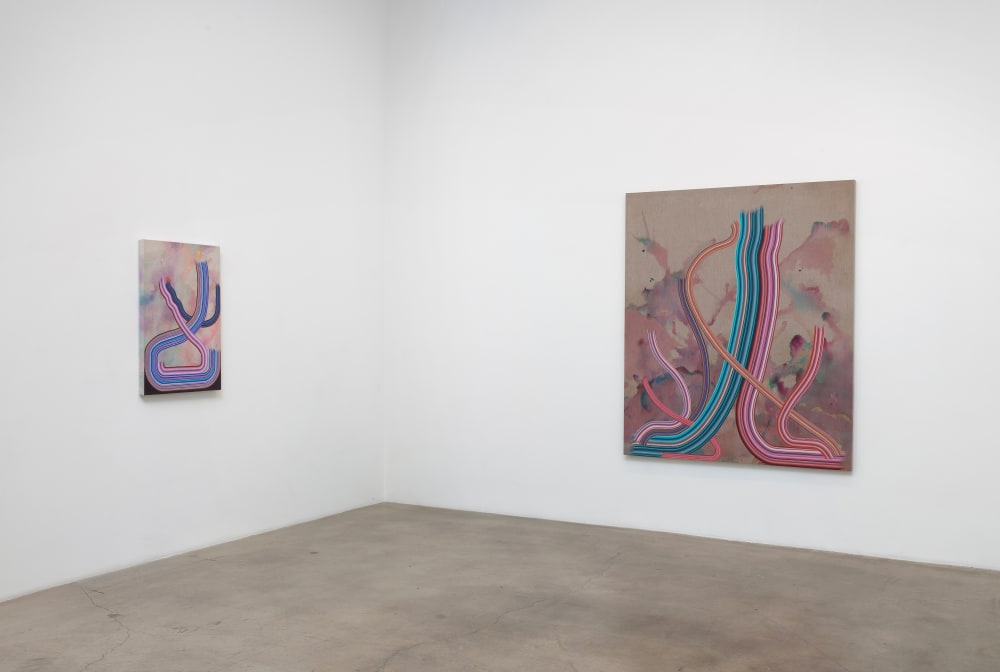 Take a single letter from the stream

Dani Tull is a versatile artist who has been exhibiting his paintings and sculptures since the early 1990s. While the style and content of the work has morphed throughout the years, no matter the backstory or motivation, the pieces are always thought provoking, visually engaging, impeccably crafted and never simply eye candy. In the past, Tull has drawn from pop-culture in addition to embedding personal references in the work. His recent paintings follow suit. In this current series he begins with a base layer of language —in the form of hand written words and poetry—  only to obscure this text-infused underpainting in favor of abstraction. The texts are never revealed, yet they are the impetus for the paintings. 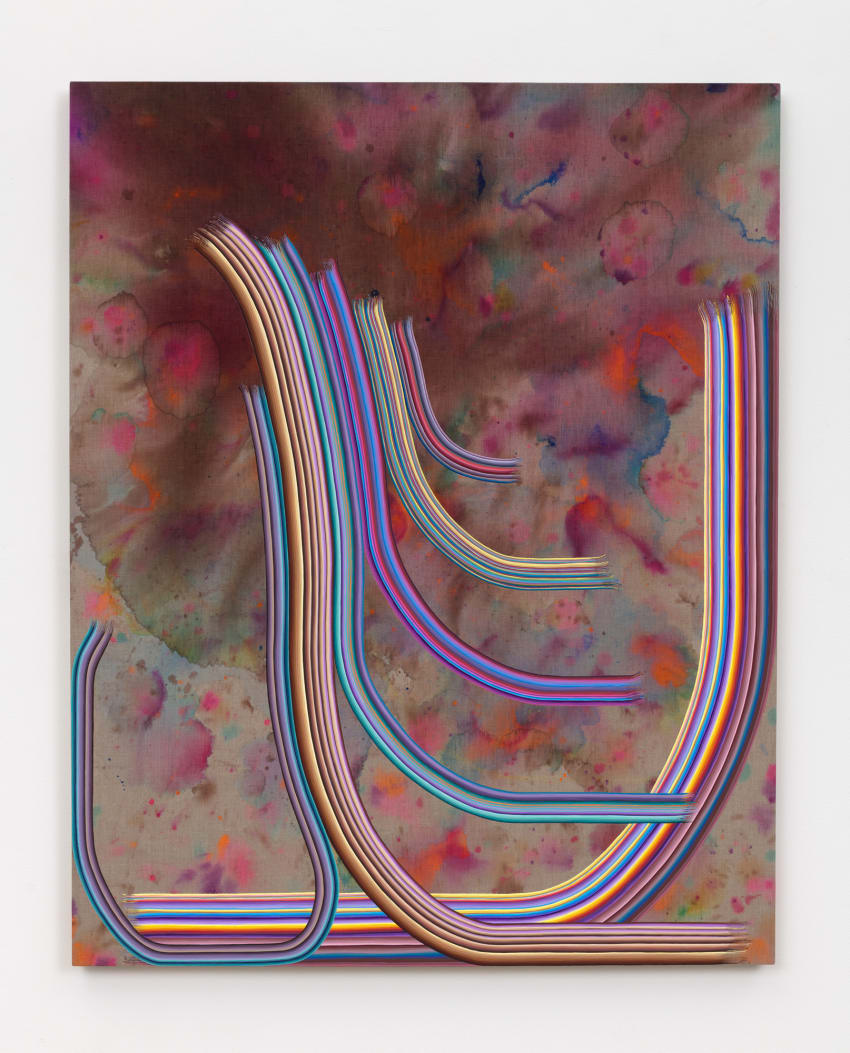 In Take a single letter from the stream, he presents eighteen large to modest sized canvases. Each begins with personal texts or poems written by others that he inscribes with graphite in long lines that arc across the compositions. These lines of language are then painted over to become colored stripes or, as Tull refers to them, streams that undulate across stained or opaque backgrounds. 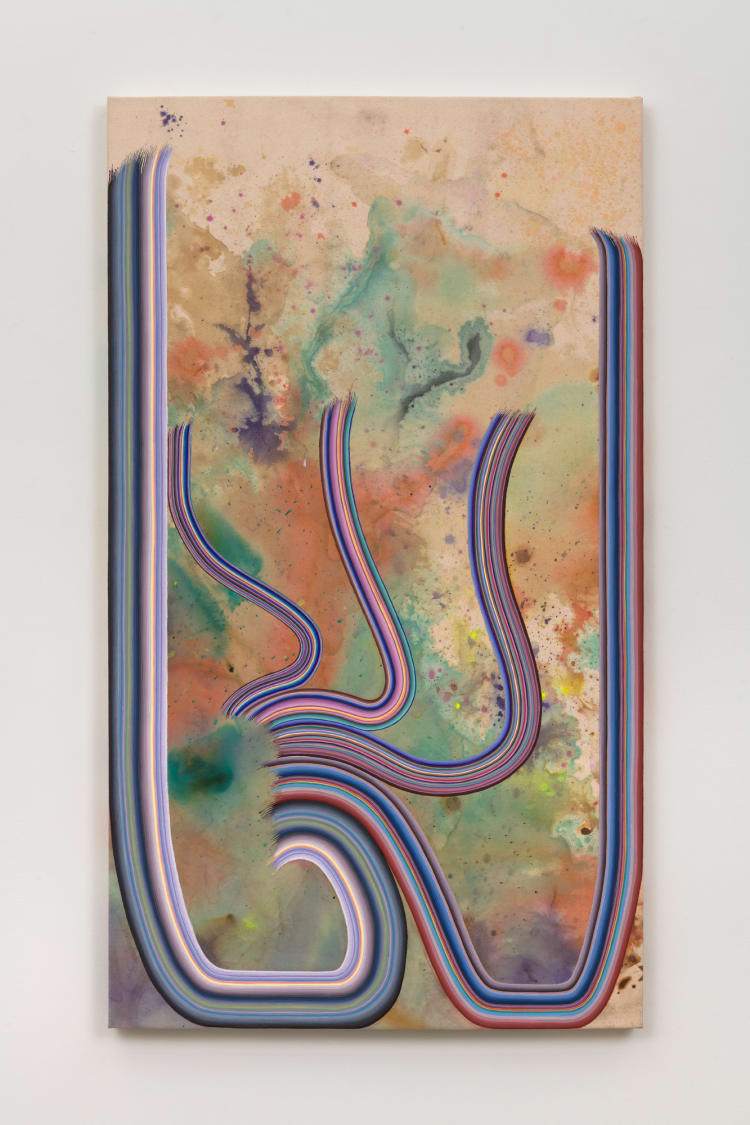 Slow Swirl at the Edge of the Sea

Send sentences as vessels at dawn (Rilke in LA), (all works 2021) is a 72 x 60 inch painting with six discrete striped ribbons above a raw linen base stained with drips and geometric shapes in pastel colors. Layered on top of this light, airy ground are curvilinear ribbons — striations — made from differently colored thin lines of paint that sweep across the composition and butt up against each other, but never intersect. In this painting, Tull fills in some of the areas in between the streams with sections of opaque paint in hues culled from the striations. The concentric lines could be extrapolated to become lanes on a freeway, grooves on a record, a meandering racetrack, or even extravagant ribbon candy. 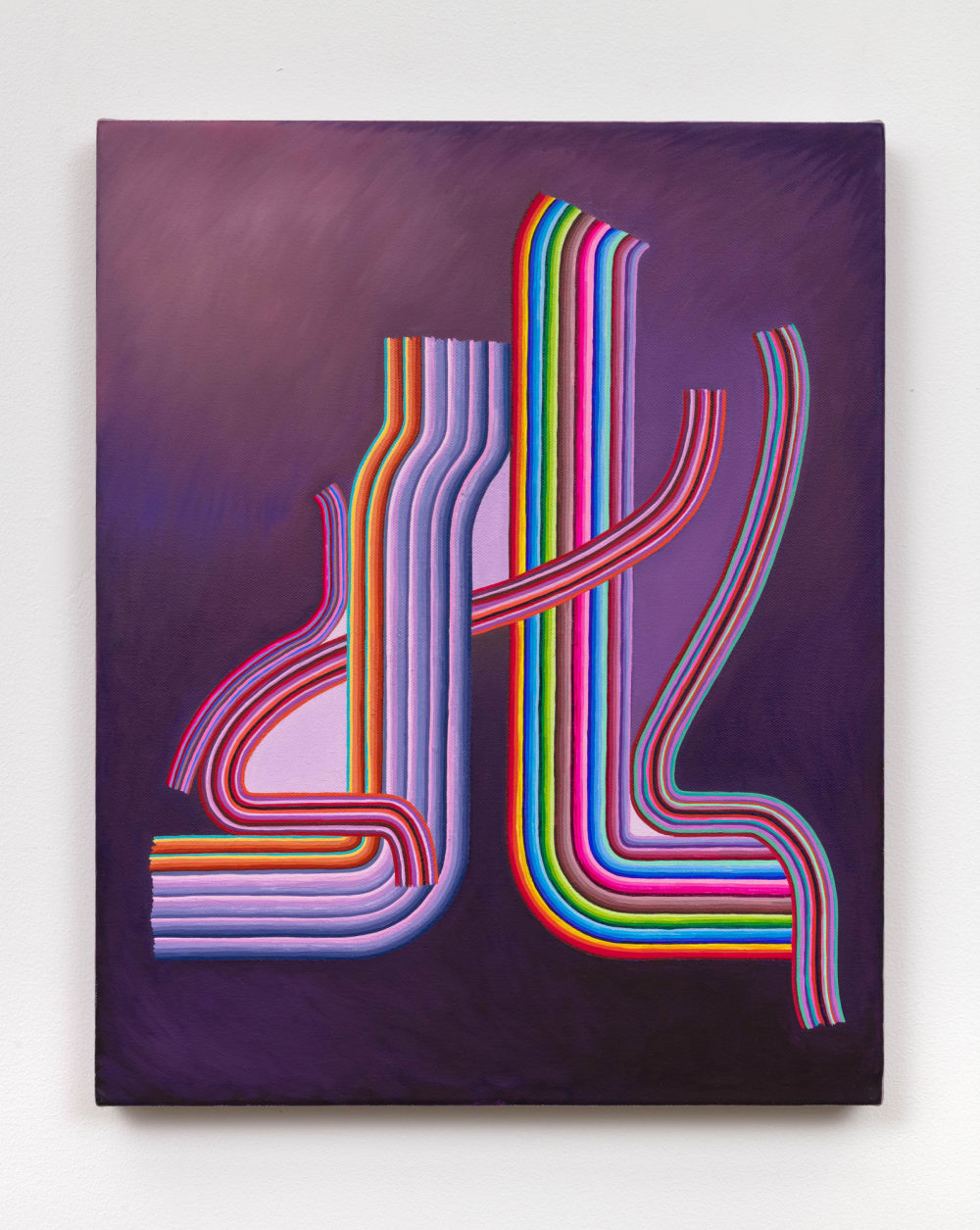 In La Sagrada Familia (The Sacred Family) — a reference to Gaudi‘s Barcelona basilica, Tull paints a succession of differently colored striped bands that appear as simple curves flowing across the composition from left to right above a painted background that resembles a color field painting akin to works by Paul Jenkins, Morris Lewis or Helen Frankenthaler. The juxtaposition between the fluid, quasi-transparent stained background treatment and the dense stripes of paint gives pause as their relationship is somewhat incongruous. Yet, Tull has always been interested in working with dissonance while finding ways to create harmonies. 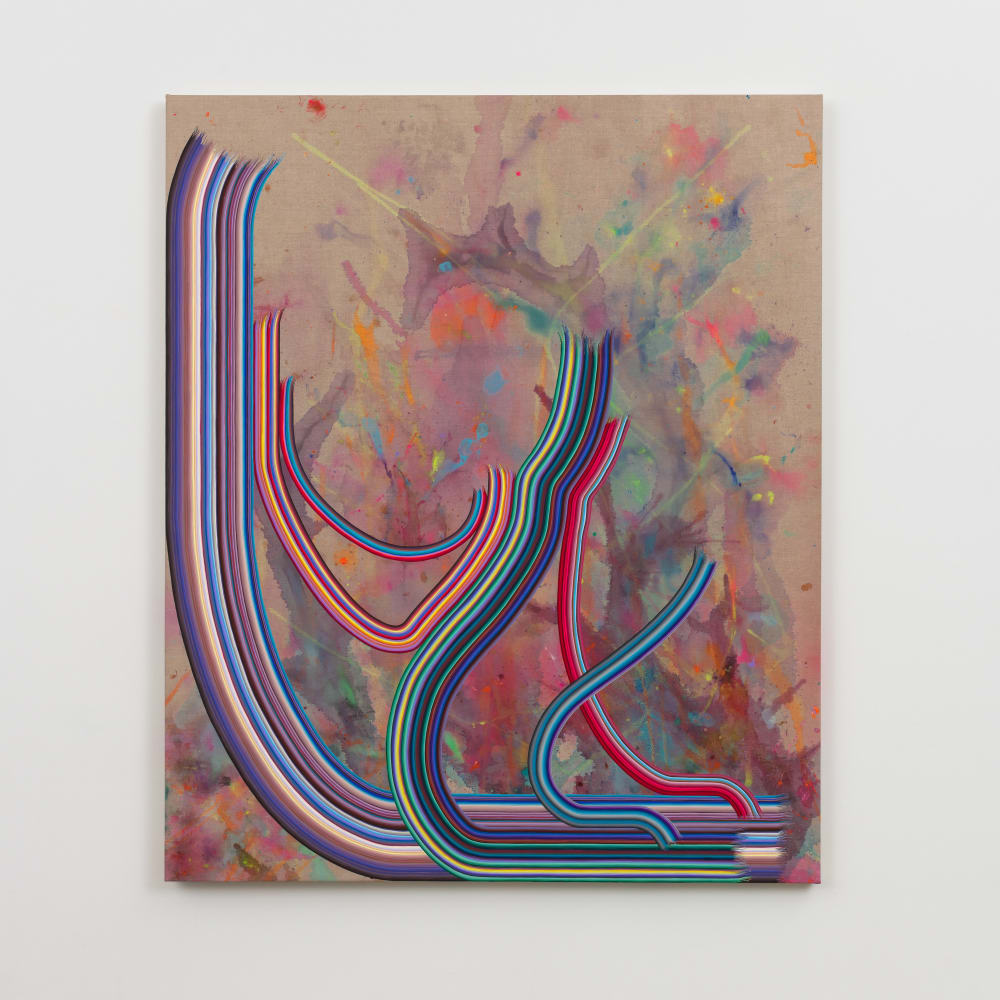 Send sentences as vessels at dawn (Rilke in LA)

Looking at an image posted on Instagram of the paining at an early stage helps to understand Tull’s process. In the first photo, assistants slowly write out lines of text following stripes that have already been painted. Then, using brushes, these new texts are painted over as single bands of color that completely obscure the hand-written words. This happens over and over again until all the words disappear. The ends of each stripe of color fade out or fray like the threads of an old blanket. Knowing the paintings are text-based causes frustration and curiosity to know what lies beneath the colors and what motivated Tull in the process of constructing the works. 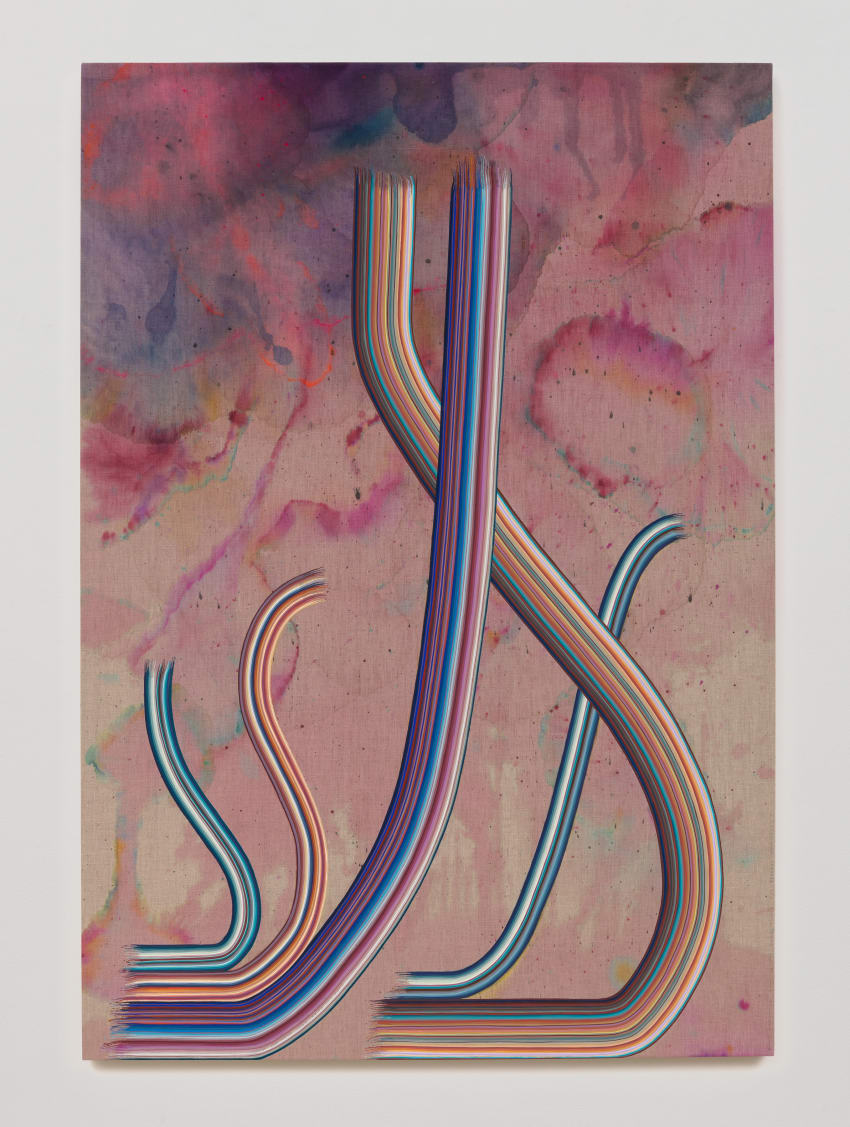 Slicing the aurora (from across the room)

Backstory aside, it is a delight for the eyes to travel the paths of the streams in paintings such as Cascading Voices where the ribbons overlap and intersect, or Slow Swirl at the Edge of the Sea where five distinct ribbons emanate from a deep green-blue stain toward the bottom left of the canvas. While Tull is specific about the color of each ribbon — drawing from personal memories, objects and past artworks — these references do not always reach viewers. Rather, one is left to extrapolate or simply indulge in the pleasure or the gestures, rhythms and internal energies of the paintings.