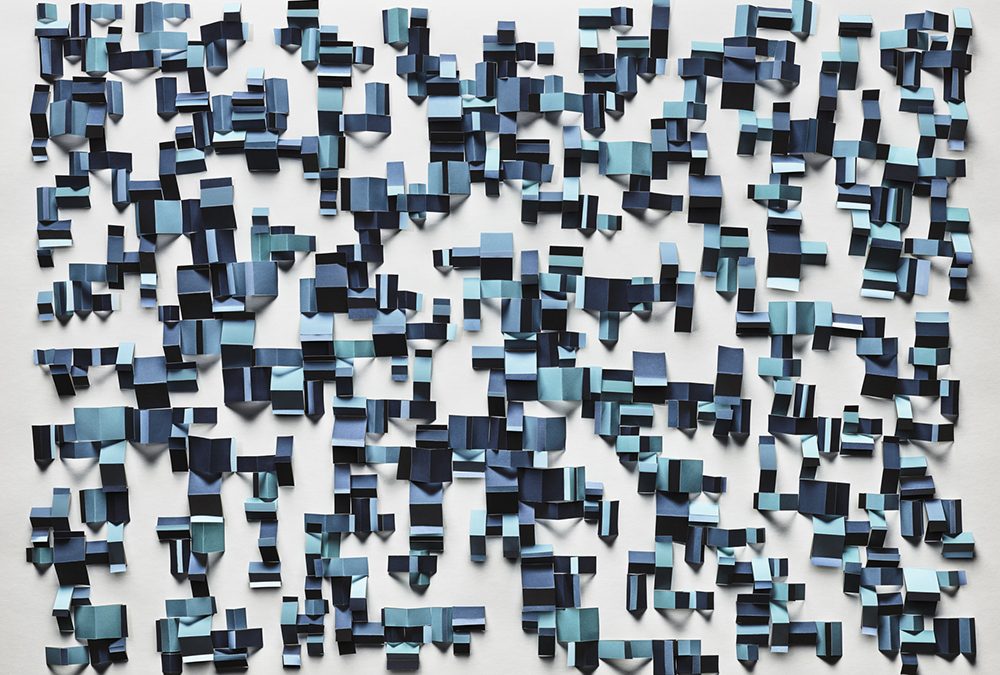 Rather than use a camera to frame the outside world, Christiane Feser creates three-dimensional sculptures in her studio that she then photographs. The works in her exhibition In Between are photographs of these assemblages which are often made from layering cut paper and small objects like pins. Because photographing the 3D sculptures flattens them, Feser then proceeds to print multiple copies of the image which she cuts, combines and re-photographs to return dimensionality to the work. The resulting pieces are photographs and constructions that are strangely two and three dimensional simultaneously. The works are comprised of complex patterns in subtle tonalities that when looked at closely become even more difficult to figure out and reconstruct. 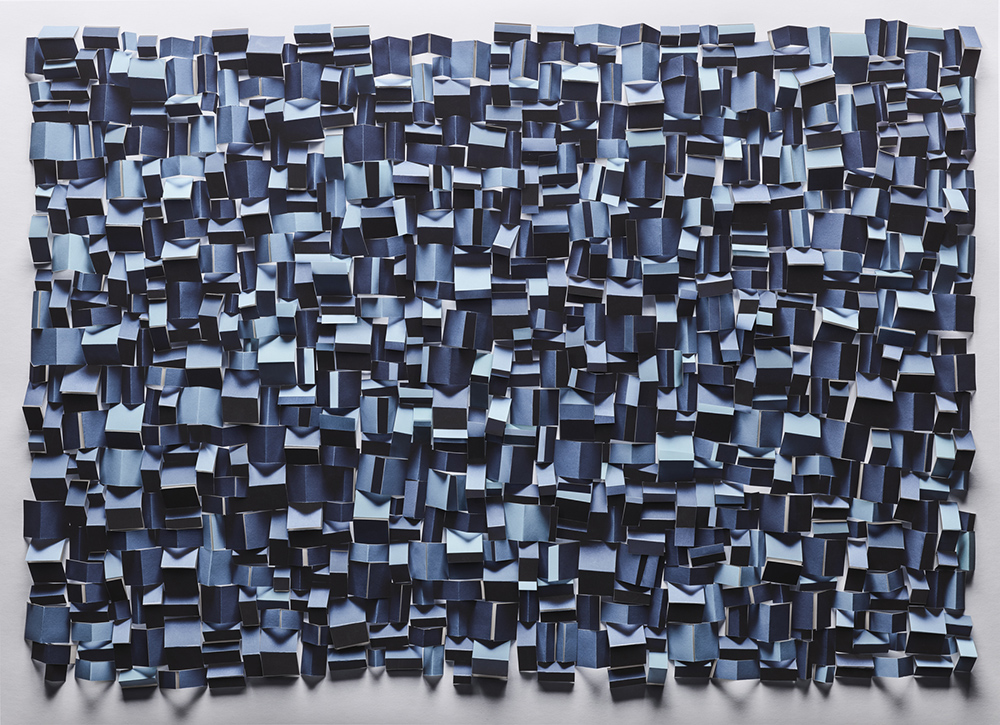 Partition 145 (2020) is an undulating array of blue-toned cut paper shapes that in some ways resemble the plan of a city seen from above where each folded piece of paper represents a home. Some of these angular forms are actually cut out from the printed page and folded so they rise from the surface while other shapes remain flat and are part of the original photograph. The cut fragments cast real shadows that are juxtaposed with the shadows captured within the original image. The final picture is hard to decipher as it is both “real” and an optical illusion — which is exactly Feser’s point. Partition 144 (2020) is also a dense pattern of interlocking shapes. 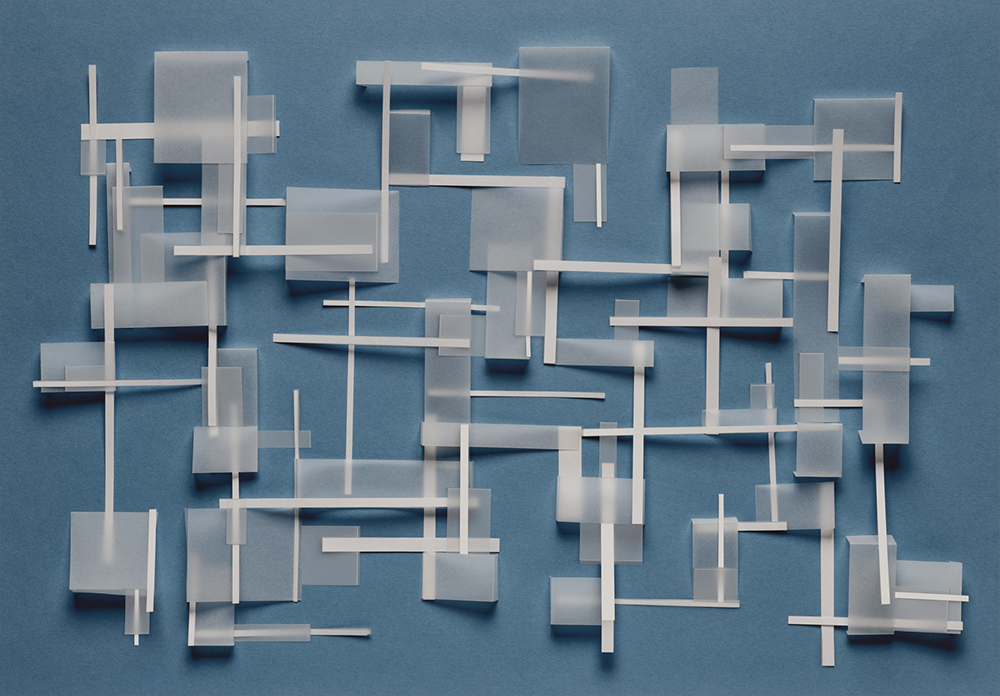 Here, Feser fills the image with folded fragments of paper in different shades of blue/gray to create a paper tapestry The work is both textured and flat, comprised of an all-over pattern that fills the composition. Again, when viewed from the side, the depth of the assemblage is revealed. In T_6 (2021) Feser layers transparent and opaque rectangles and strips of paper across a light blue background to create a maze-like configuration to form vertical and horizontal pathways that cast both “real” and photographed shadows. Similar illusions occur in T_10 (2021). Both recall works like Piet Mondrian‘s Composition 11 (1942), a non-representational and abstract, albeit architectural and lyrical painting of vertical and horizontal lines that inhabit the painted surface. 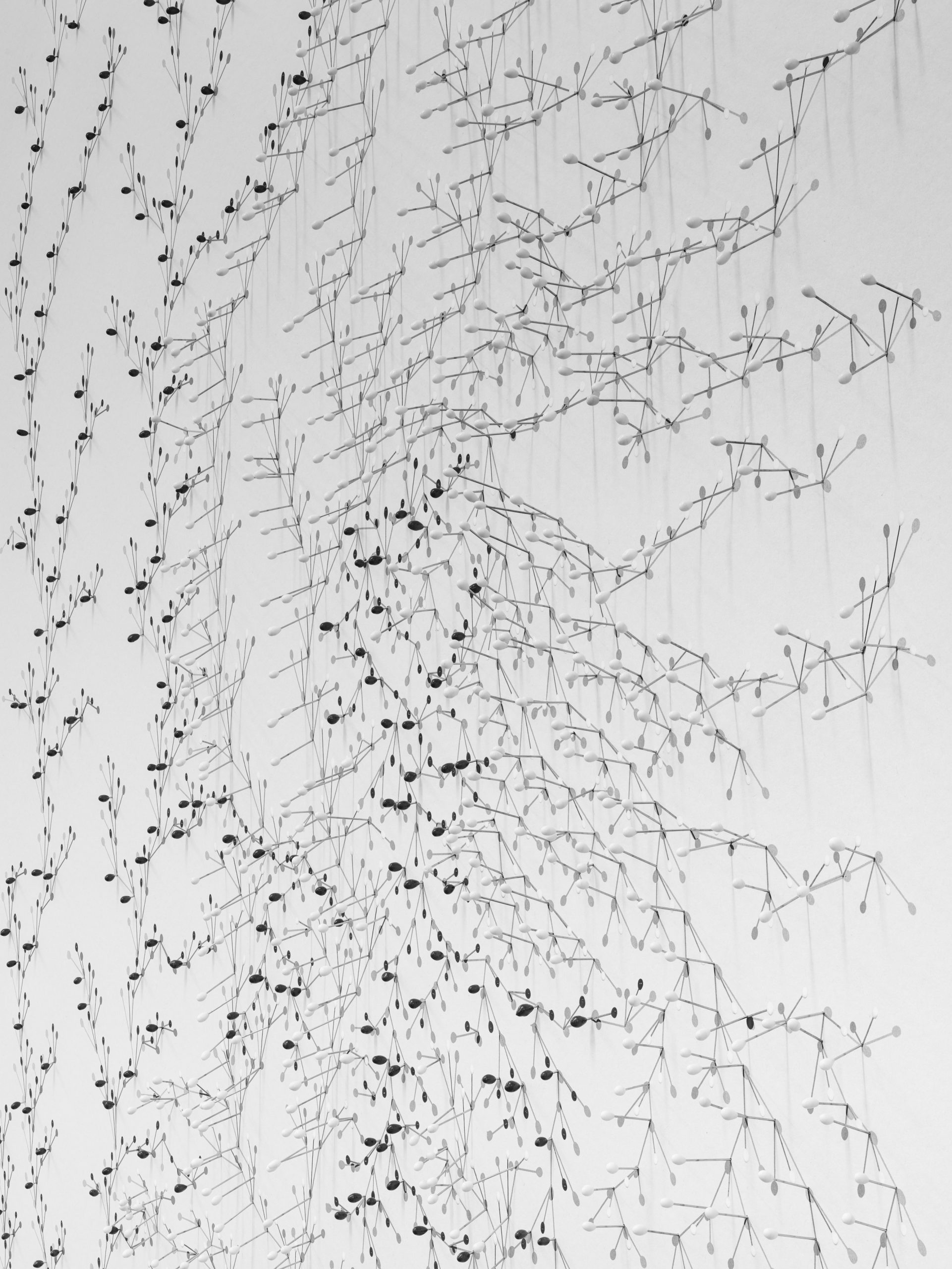 Feser’s photo objects are intriguing puzzles that ask viewers to decipher which aspects of the final image are sculptural as opposed to photographic. This sometimes requires moving one’s body in front of the image to block the gallery lights. These nuanced differences are revealed when standing in front of Nullpinkte 23 (2020), a dizzying photograph of hundreds of stick pins presented in an organic herringbone pattern that resembles fluttering buds on interlocking branches. Each pin has a small black or white head. The constructed image has been photographed against a neutral white ground and carefully lit so the pin heads extends varying amounts from the surface of the page and cast multiple shadows. The fact that some of these shadows disappear when the viewer moves across the image reveals that the image is both a photograph and a sculpture at once. 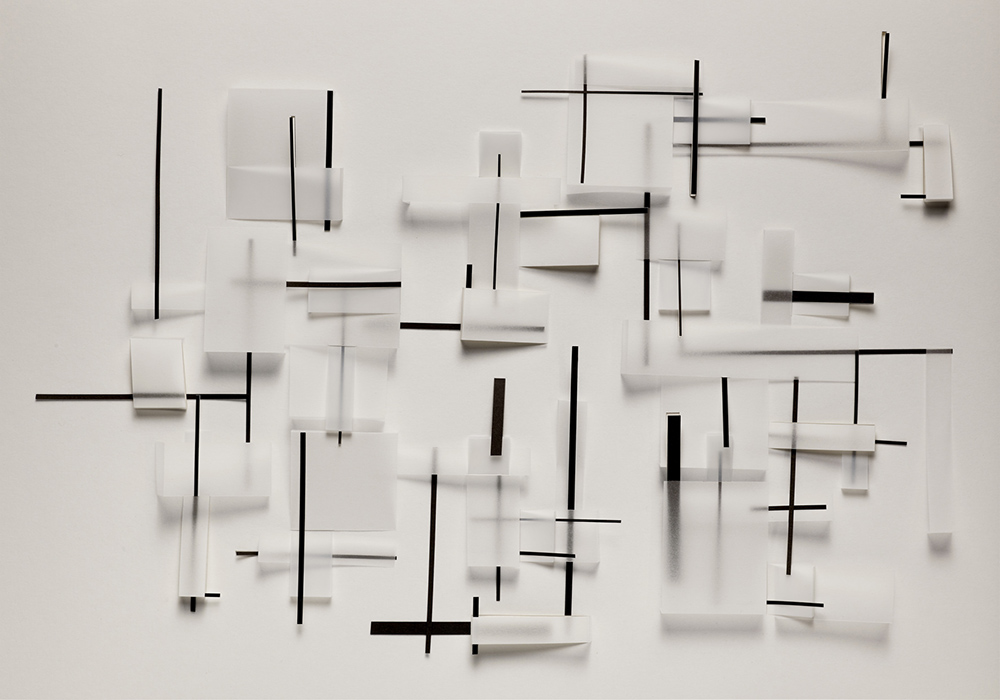 Feser’s works seem more engaged with the issues inherent to photography than in the creation of optical and visual illusions. They are evocative formal studies that explore the relationship between flatness and depth. As abstract photographs they are playful and beautiful. But, because they are constantly changing depending on the light in the room, they transcend the photographic to become dynamic framed wall sculptures.