Polly Borland: ‘Nudie’
Revealing the Essence of the Self 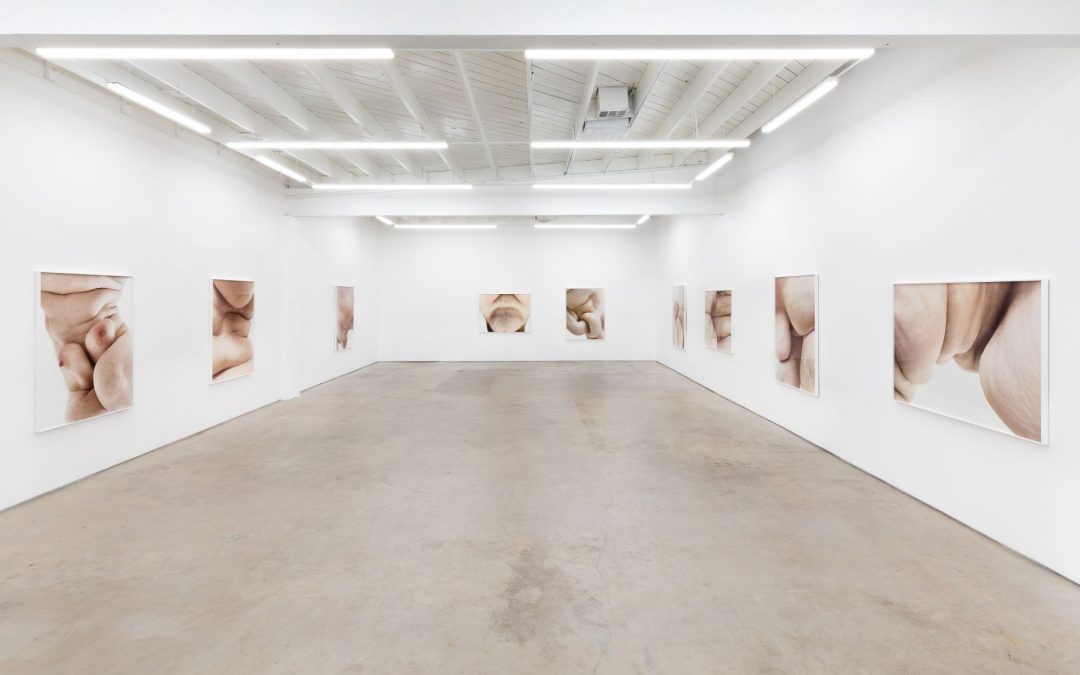 Polly Borland is an Australian photographer who currently resides in Los Angeles. She is best known as a commercial photographer who specialized in editorial and portrait work. Her extensive resume and online portfolio reflects the scope of this impressive career. At Nino Mier, for the first time, she turns the camera on herself to create a highly personal body of work titled Nudie. Borland’s Nudies may be thought of as “selfies” — digital photographs made with an iPhone camera to share with an audience— as she even often creates them using a selfie stick, but unlike traditional selfies, these images are not about showing off where one has been or who one has been with. Rather, these large-scale color photographs are unsettling, close cropped and distorted images of her aging body. 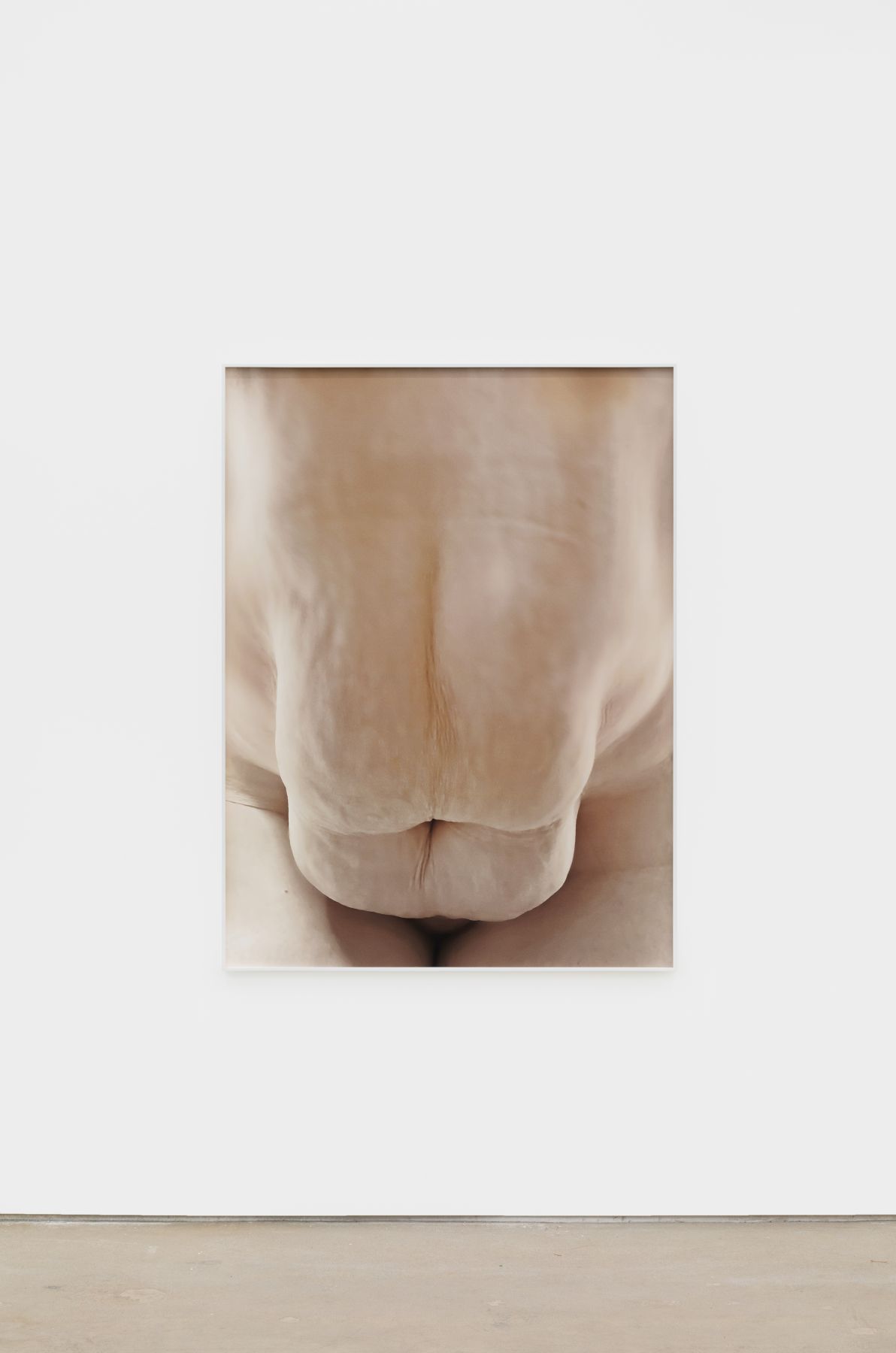 Self-portraiture has a long, rich history in artists as diverse as Rembrandt, Van Gogh, Picasso, Frida Kahlo and Cindy Sherman who have all examined their faces and/or bodies in works of art. While many painters and photographers have reproduced their bodies faithfully, others have cropped and abstracted them, using these fragmented representations as a point of departure for more psychological explorations. Borland’s photographs transform the body into ungainly and awkward shapes dotted with veins, wrinkles, and occasional age marks. While her objectives and images share affinities with painters such as Jenny Saville, Lisa Yuskavage and Marilyn Minter who all present enlarged and/or distorted female bodies, the pieces also connect with Hans Bellmer‘s Surrealist photographs and more directly to the black and white images by John Coplans who similarly scrutinized his aging body and turning it into a strange object. 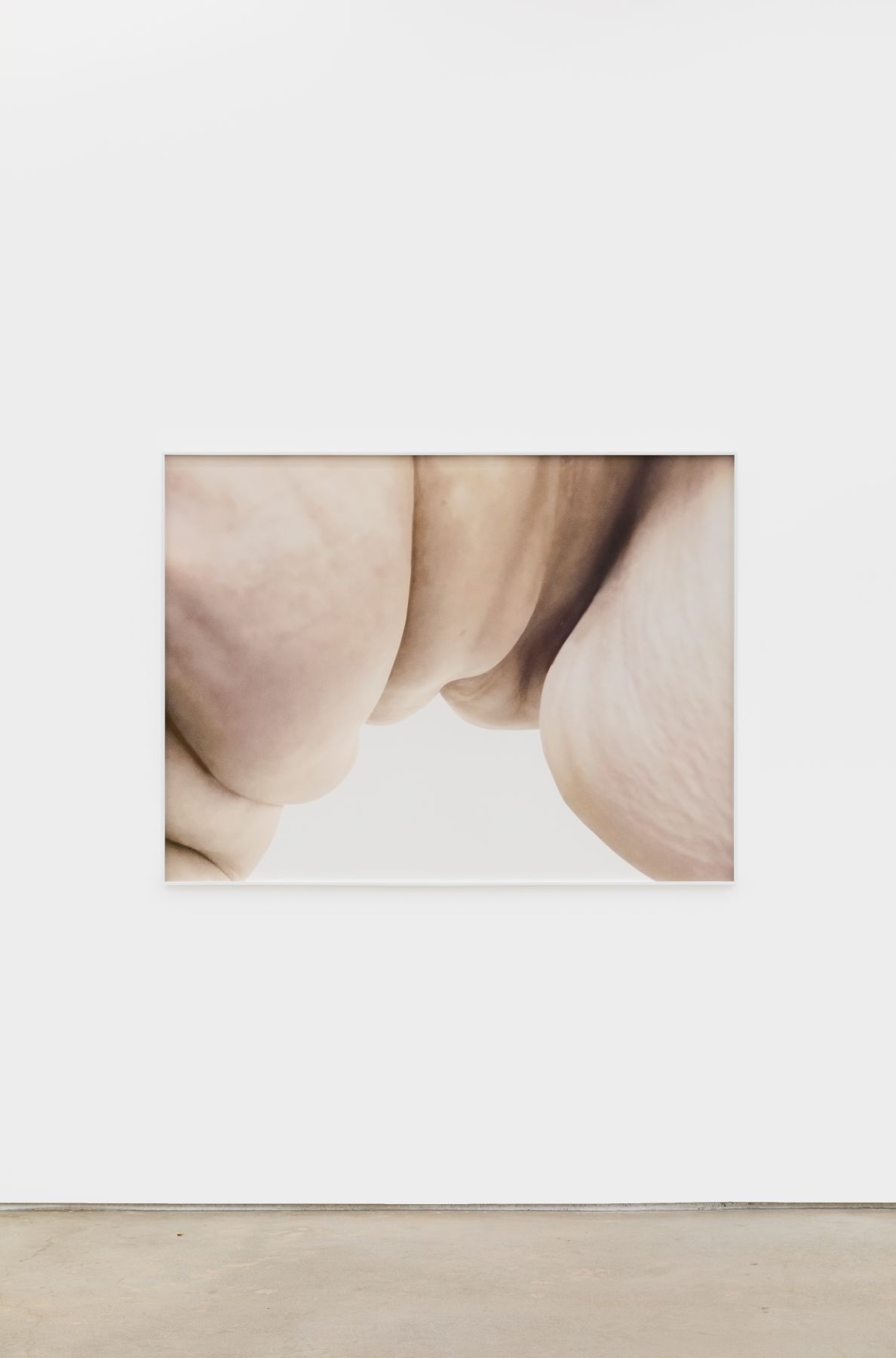 Cropping the figure and presenting it in fragmented form causes it to become depersonalized so it can be seen as an abstraction or a landscape. In Nudie (4) (all works 2021), the folds of Borland’s torso descend from the top of the composition like upside-down sand dunes. Nudie (2) presents two sets of breasts pressed against each other turning the body into an awkward sculpted form. Nudie (13) while an image of Borland’s protruding and wrinkled gut, is also a study of light on skin and the voluminous folds of an aging body. To create these images Borland often presses a mirror against her skin to flatten it while simultaneously confusing the sense of space by reflecting the body within the frame. In most of the photographs, Borland’s body fills the frame, leaving only small areas of negative space. The folds of the skin, the color and shape of the breasts, torso, arms and legs are melded together into seemingly impossible positions to create evocative and surprising compositions. 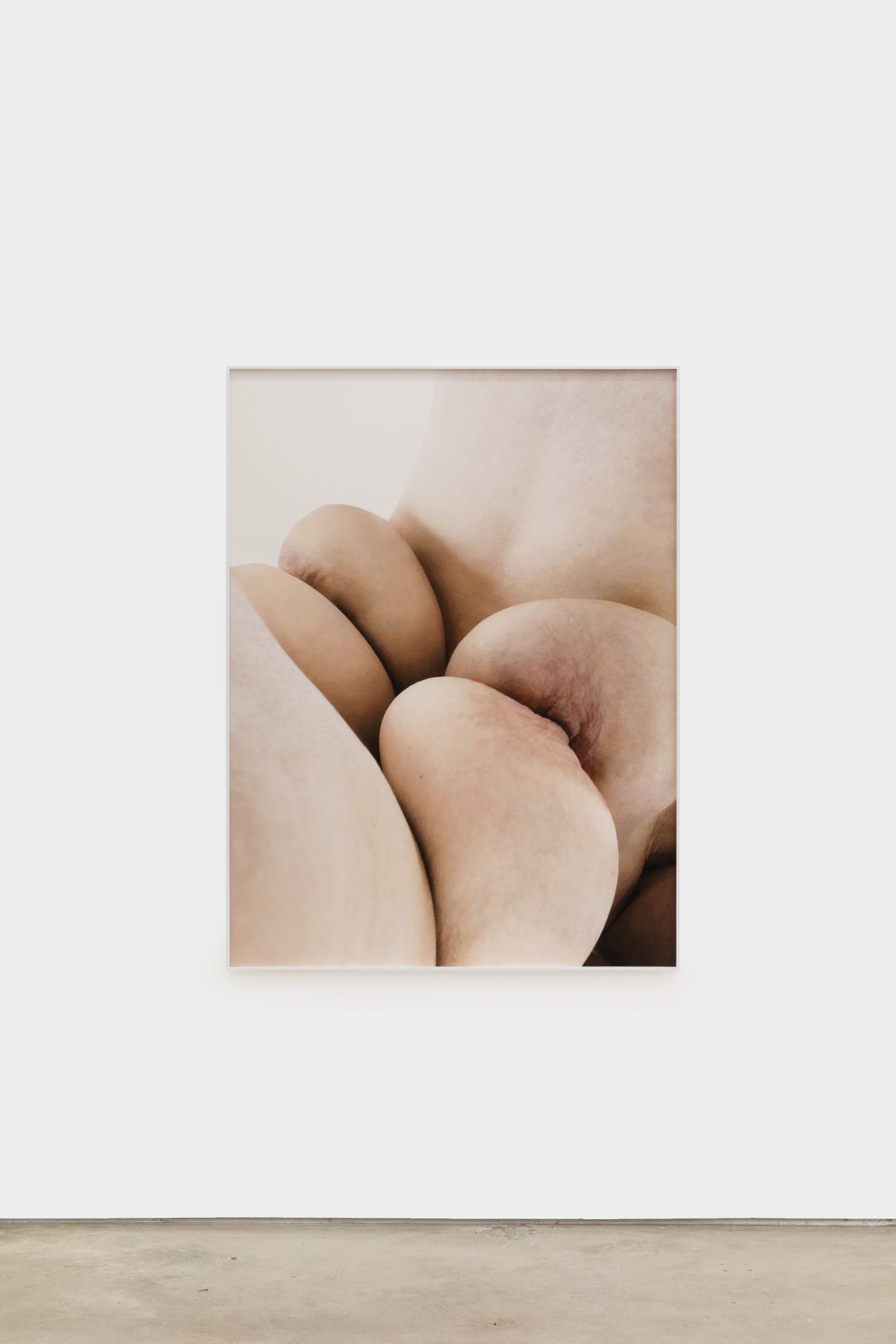 At first, it is hard not to turn away from these awkward and uncomfortable images, yet Borland is unabashed and committed to the exploration. She speaks of not being comfortable in her own skin and, having scrutinized others while making her portraits, she decided to do to herself what she has done to others— strip away the facade to reveal inner vulnerabilities. She decided she had nothing to hide and used the camera to look closely at herself to present her body as sculpture. While Borland’s Nudies are images of a naked woman, they are not sexualized nor does she present the body as an object of desire— rather she sees it as a pliable, intricate and delicate material that can be shaped in surprising and beautiful ways. 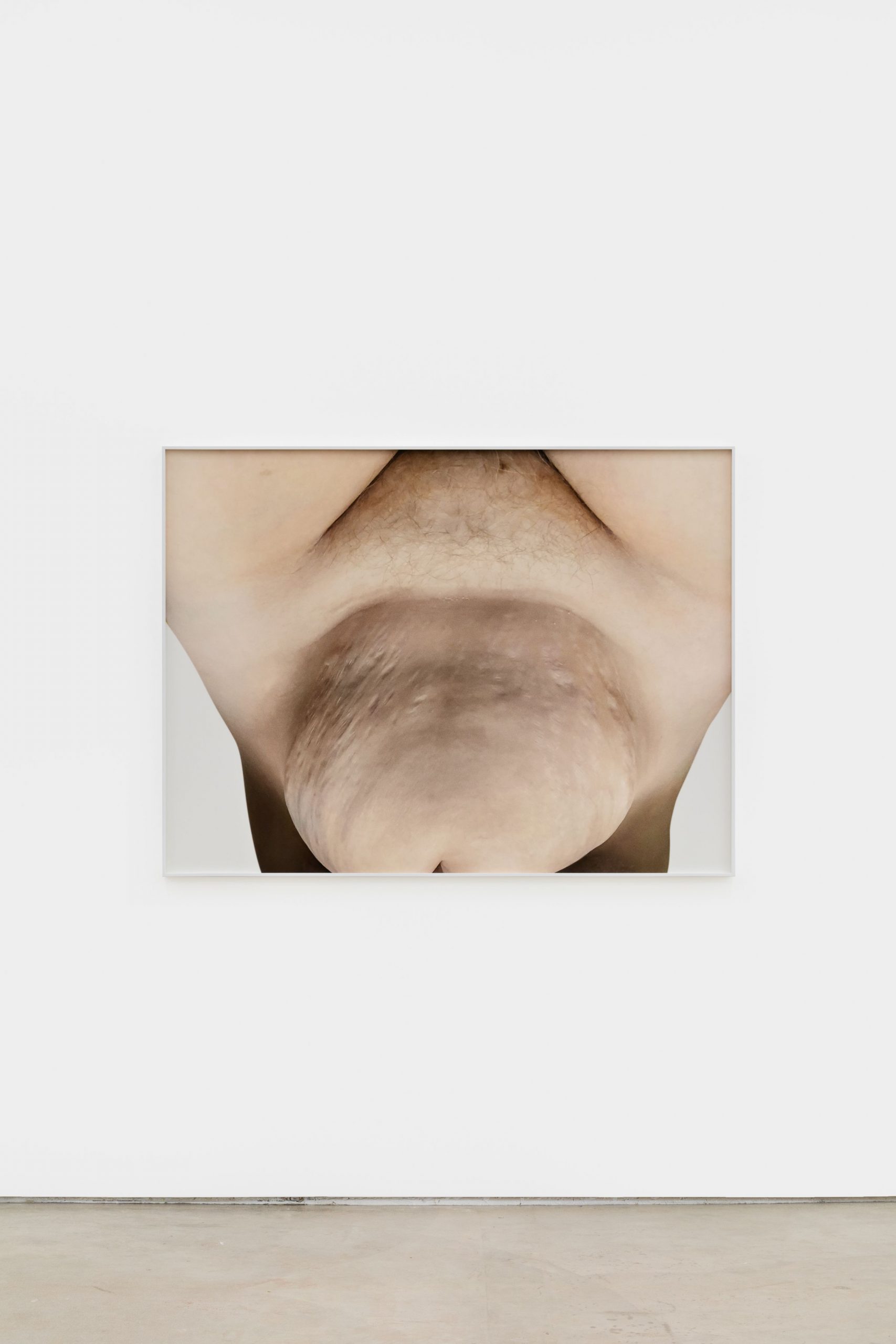 Functioning as an index for the project is a grid of 50 Polaroid photographs (Untitled) that juxtapose small croppings of Borland’s torso shot in different lighting conditions so that there is an array of colors and tonalities. Here, the sagging skin, floppy breasts and her curvaceous folds are objectified, yet still seen as parts of a whole. The jump from the small-scale Polaroids to the larger than life-sized iPhone prints is both shocking and gratifying, and, as in the larger photographs, Borland makes the leap from study to finished pieces that proclaim this fragmented, cropped, aging body is atypical but powerful material for works of art that reveal the essence of the self.