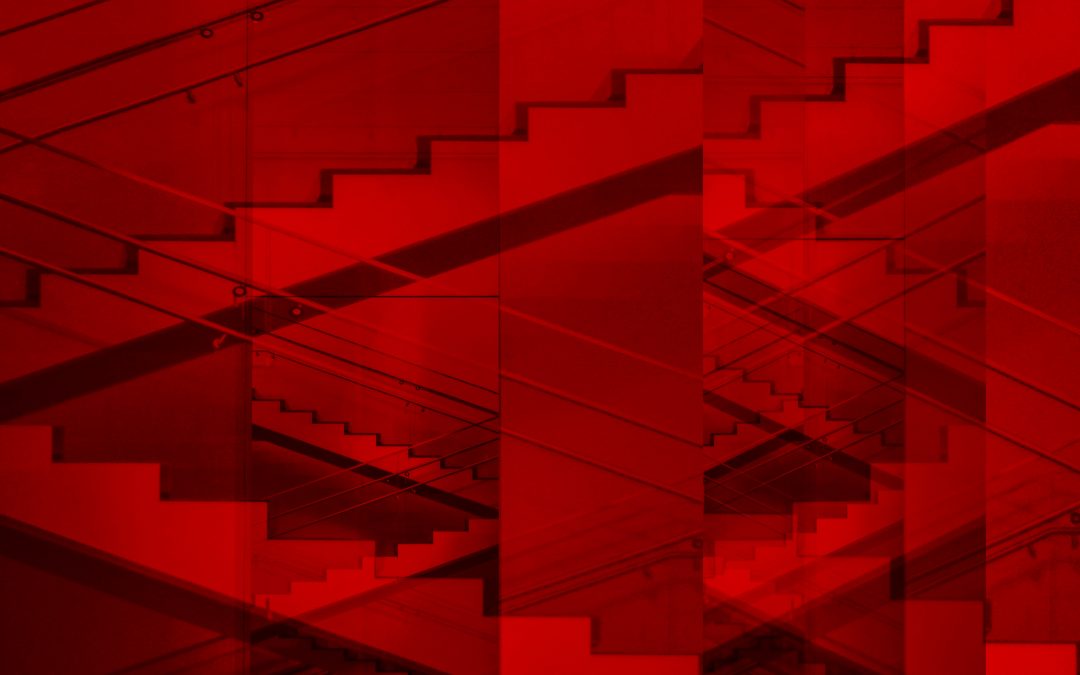 Jorge Mino is a Buenos Aires-based artist who digitally composites architectural details, repeating and reversing these fragments to create illusionistic yet abstracted spaces. Though familiar at first glance, each picture is the result of intensive manipulations. Mino photographs in cities while traveling and has amassed a large archive of source imagery from which he creates his works. 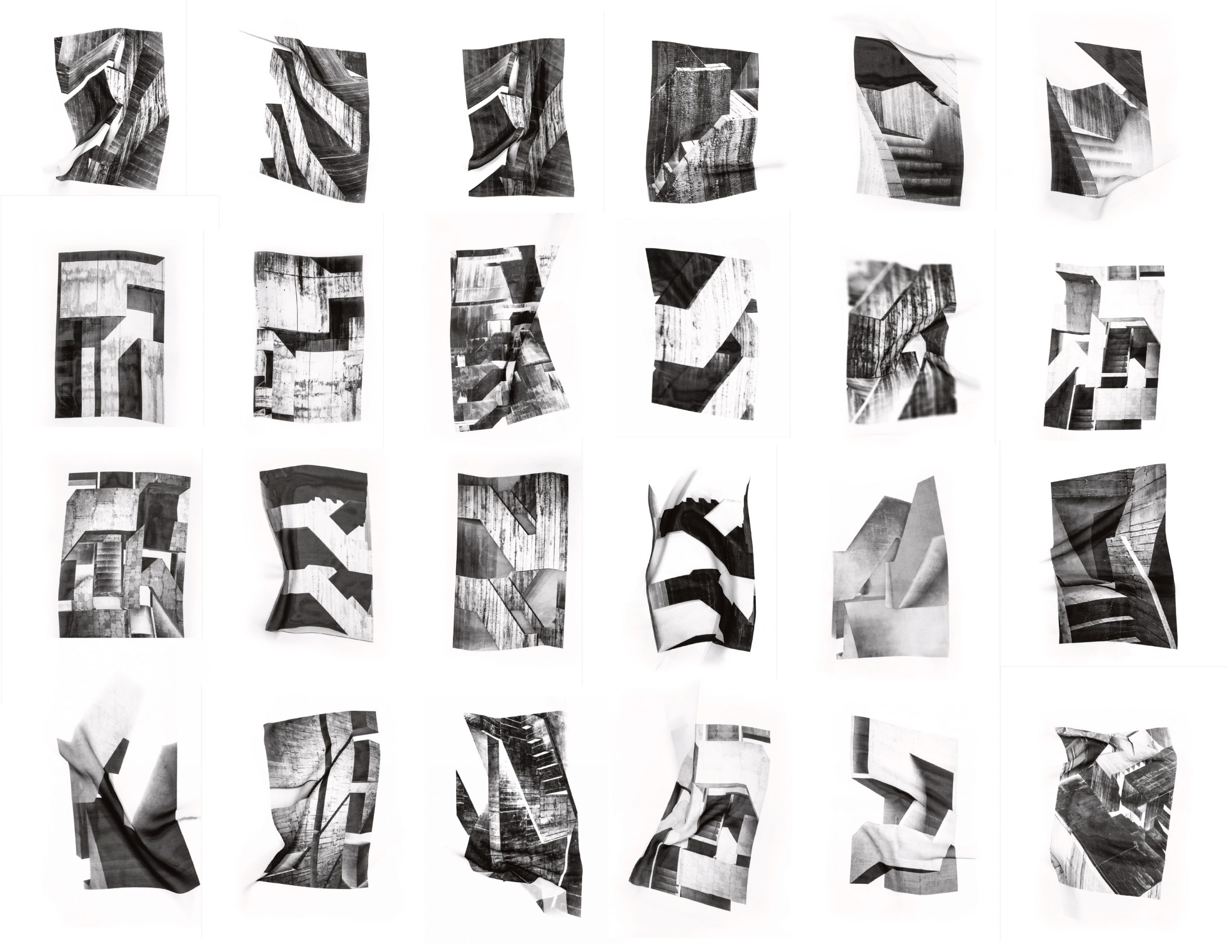 The Density of Weight

Volume of the Void (Blue) and At The End of Everything (all works 2019-2020) are vertiginous large-scale monochrome prints made from overlapping images of escalators and staircases to create spaces that loop back upon themselves in impossible ways. Volume of the Void (Blue) is a tangle of blue-toned handrails and striated escalator steps that Mino shot while in Washington, DC. He uses layering to manufacture glowing columns of light that rise from darker voids. 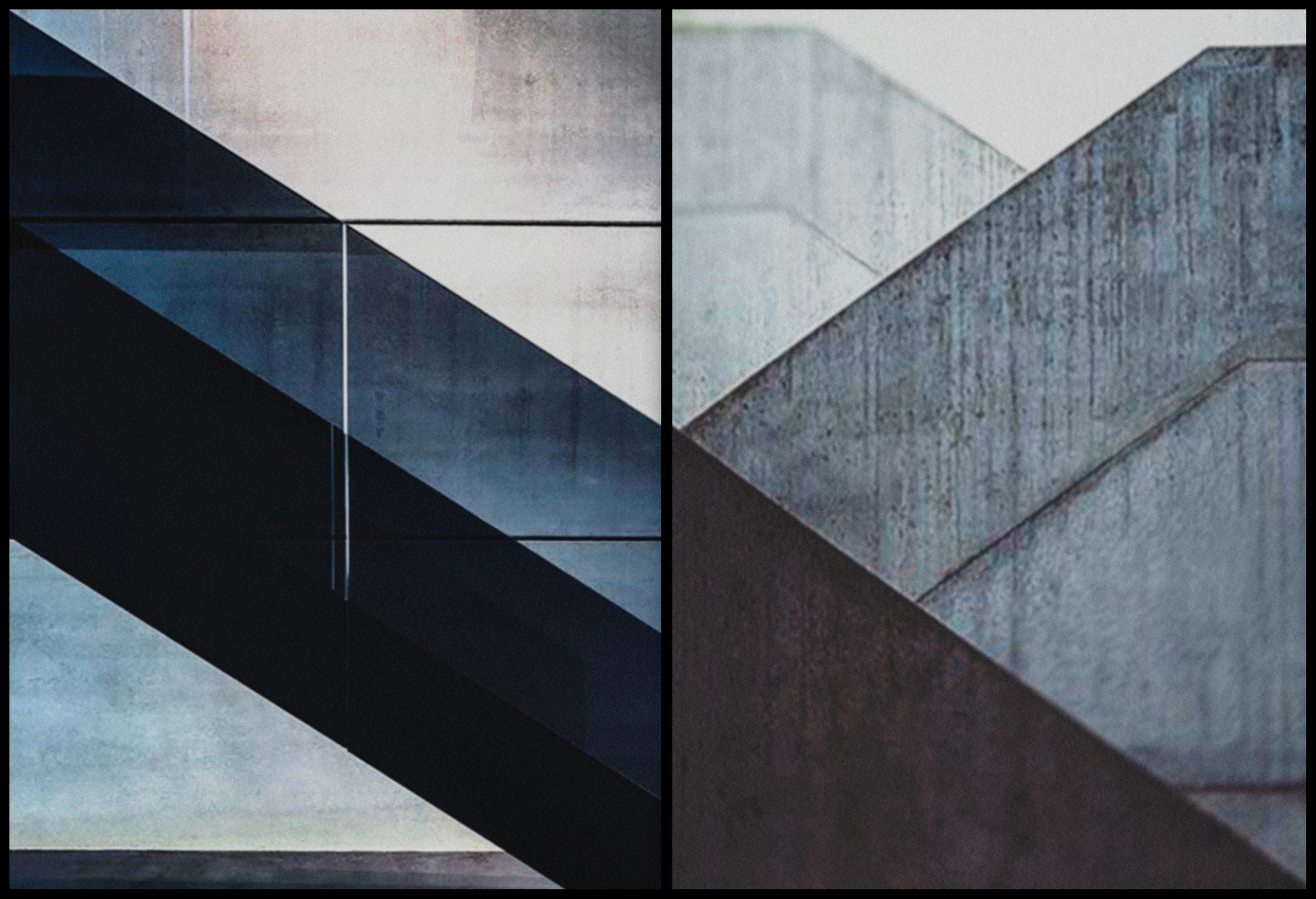 In the striking, red-toned At The End of Everything, Mino begins with a photograph of the iconic staircase at the Museum of Modern Art, NY. The zig-zag of the ascending/descending steps is duplicated across the composition at different scales and transparencies to create a disorienting composition that implies movement. This work recalls the endless staircases of M.C. Escher, as well as Giovanni Battista Piranesi‘s Imaginary Prison etchings. Piranesi and Escher both explored labyrinthine spaces that were confining while also suggesting an infinite expanse from which there was no escape. Mino’s depictions have a rhythm and formal elegance that is more playful than claustrophobic. 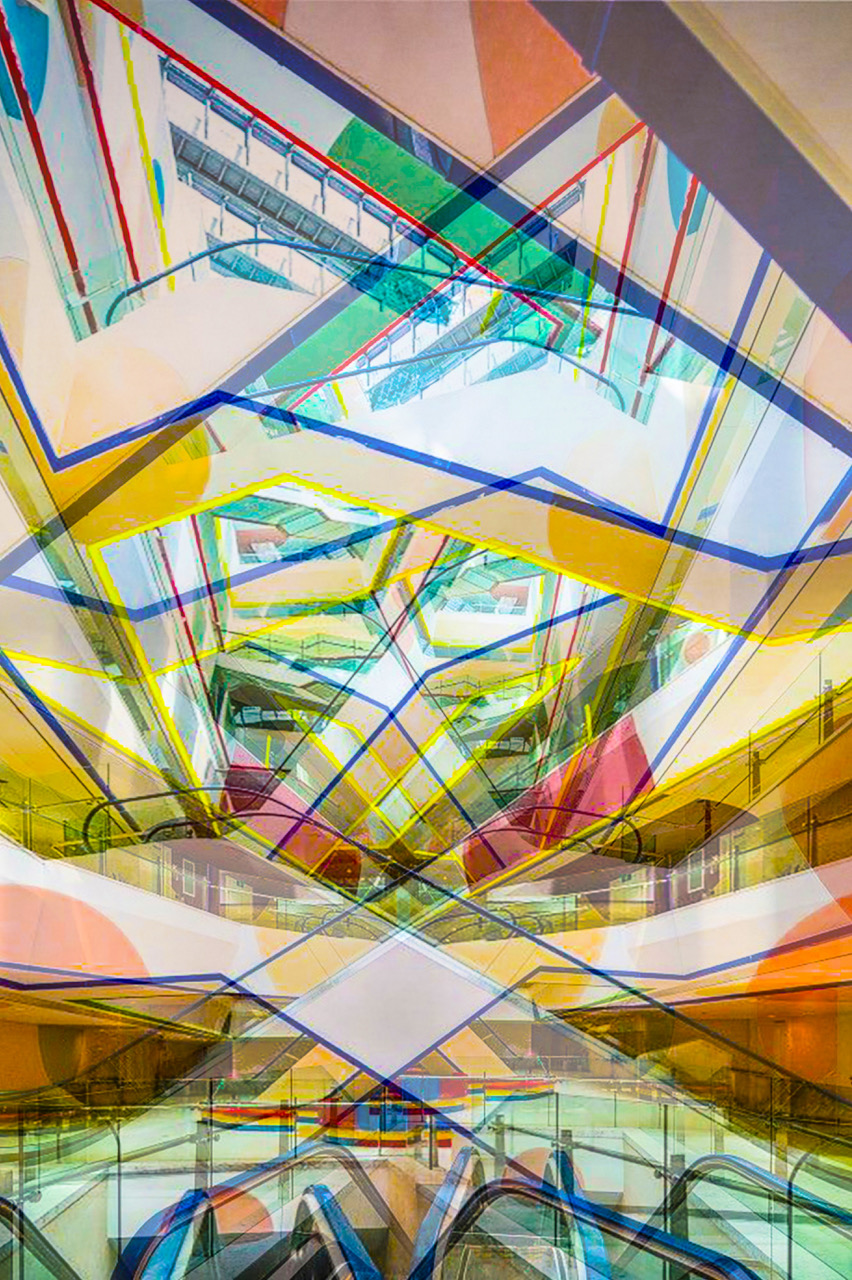 The largest work in the exhibition is a diptych that spans 105 inches across the horizontal. Titled Balancing the Tensions, it juxtaposes two concrete walls and presents them as abstract shapes made up of intersecting rectangular and diagonal planes. Mino successfully captures the way the light falls on the buildings, creating angular shadows that transform a bland concrete facade into a beautiful array of tones and shapes.

For Tension Balance (Multi-Color), Mino layers multiple images of what appears to be an interior shopping mall using the lenticular process to create the illusion of movement and infinite depth. In this dizzying and colorful work, the hand-rails alongside staircases/escalators stand out to become a maze of blue, red and yellow lines that defy traditional geometry in the way they criss-cross the picture plane. Due to the lenticular process, moving one’s head from left to right across the image increases the sensation of movement. Other lenticular pieces in the Tension Balance series create a similar sense of disorientation through the intermingling of divergent planes, colors and angles. 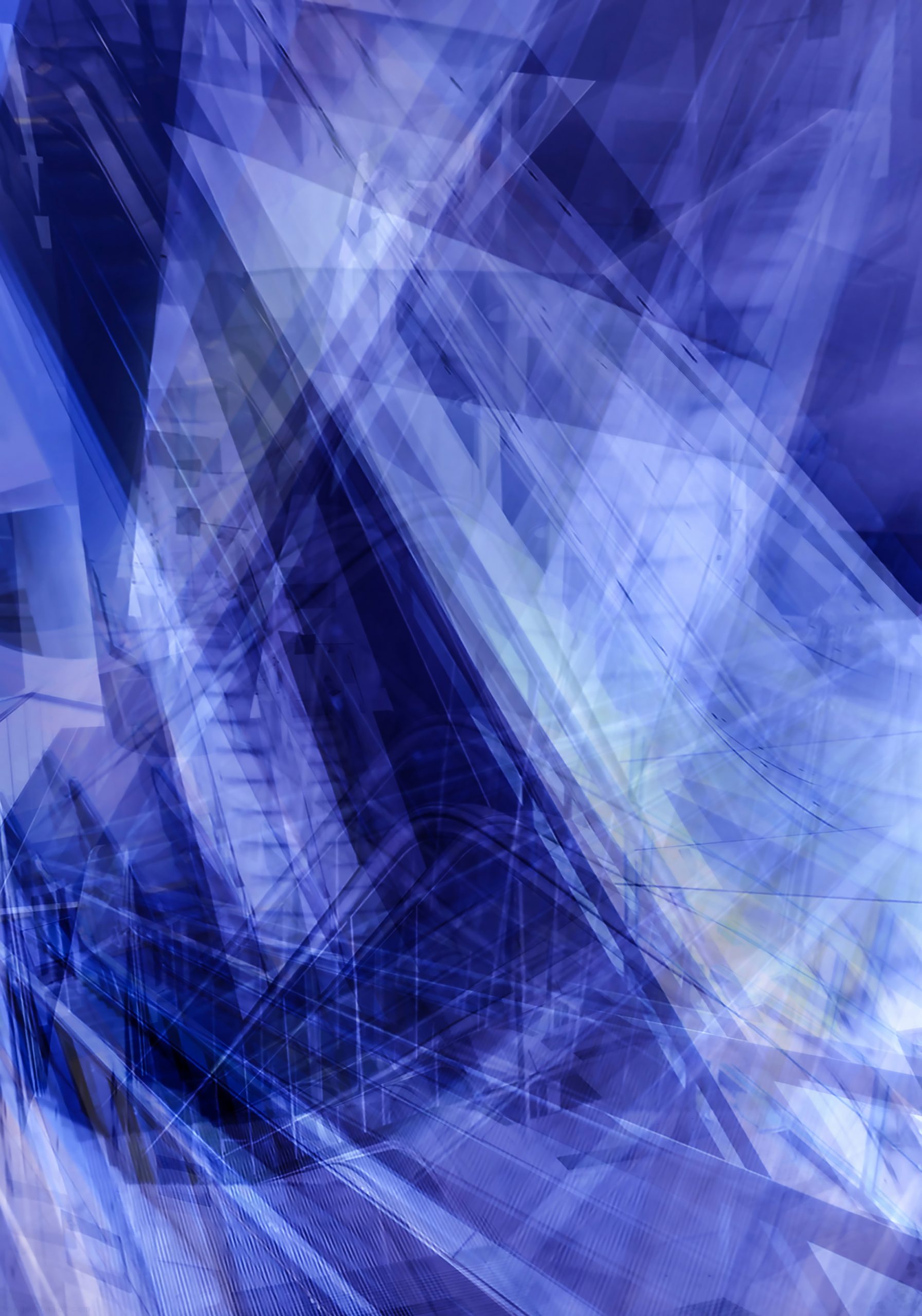 Volume of the Void (Blue)

Smaller digital prints make up the 24-part The Density of Weight Series which is shown as a six-by-four grid in a separate room. Focusing on a staircase or wall, each photograph in the grid is a grainy black and white image depicting a close-cropped fragment from a concrete building in the style of bunker architecture. Though Mino’s process is not explained, it appears as if the images were (perhaps) first printed on fabric where they were twisted and stretched, then re-photographed in this fluid, non-rectangular state.

The results are architectural details whose geometry becomes pliable. Mino’s pieces are formal explorations that investigate tensions and balances between shapes, angles, light and shadow. He is interested in built spaces and though his images are devoid of people they are full of movement. Each print in the exhibition displays an internal rhythm based on the structure of the architecture that has been gracefully enhanced by Mino’s careful compositing.

Cover image: At the End of Everything; all images courtesy Lois Lambert Gallery