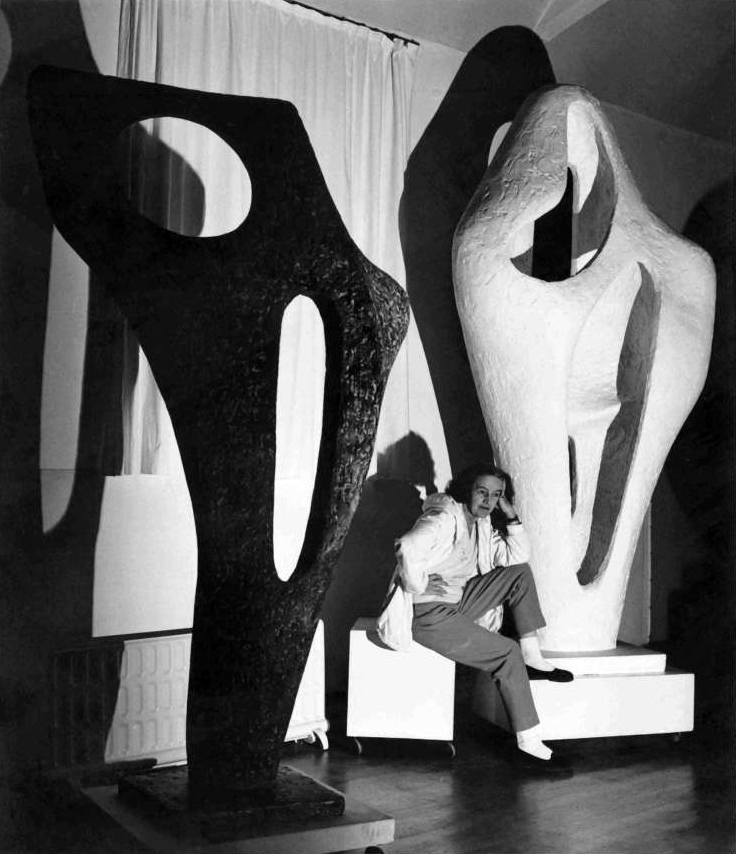 Barbara Hepworth with the Gift plaster of Figure for Landscape and a bronze cast of Figure (Archaean) November 1964. Photograph: Lucien Myers

In summer 2021, to mark The Hepworth Wakefield’s 10th anniversary, the gallery will organize the largest exhibition of Barbara Hepworth’s work since the artist’s death in 1975.

The exhibition will present an in-depth view of the Wakefield-born artist’s life, interests, work and legacy. It will display some of Hepworth’s most celebrated sculptures including the modern abstract carving that launched her career in the 1920s and 1930s, her iconic strung sculptures of the 1940s and 1950s, and large-scale bronze and carved sculptures from later in her career. Key loans from national public collections will be shown alongside works from private collections that have not been on public display since the 1970s, and rarely seen drawings, paintings and fabric designs. It will reveal how Hepworth’s wide sphere of interests comprising music, dance, science, space exploration, politics and religion, as well as events in her personal life, influenced her work.

Contemporary artists Tacita Dean and Veronica Ryan have been commissioned to create new works which will be presented within the exhibition. Each artist will explore themes and ideas that interested Hepworth and that continue to resonate with their own work. Art works by Bridget Riley from the 1960s will also be presented in dialogue with Hepworth’s work from the same period.

The exhibition will open with an introduction to Barbara Hepworth’s work, showing the three sculptural forms she returned to repeatedly throughout her career using a variety of different materials. A detailed look at Hepworth’s childhood in Yorkshire through archive material and photographs will include some of the artist’s earliest-known paintings, carvings and life drawings as she began to explore movement and the human form. A proponent of direct carving, Hepworth combined an accute sensitivity to the organic materials of exotic wood and stone with the development of a radical new abstract language of form.

Hepworth’s determination to break free from accepted tradition was enhanced by travelling to Paris in 1933 where she visited the studios of many of the leading European avant-garde artists including Jean Arp, Constantin Brancusi and Pablo Picasso. A large section will look at Hepworth’s development of abstraction in the 1930s including Three Forms (1935) created shortly after she gave birth to triplets, an event she felt invigorated her work towards a bolder language of geometric form. One of the few examples in existence of Hepworth’s first coloured stringed sculptures in plaster, made during World War Two, will be shown alongside the many drawings she created during this period when sculptural materials were scarce. She described these drawings as ‘my sculptures born in the disguise of two dimensions.’

The exhibition will reveal the artist’s creative process, drawing on new research from the recently established Hepworth Research Network (HRN), in collaboration with the Universities of York and Huddersfield, into the ways material factors shaped Hepworth’s sculptures and how they related to her broader conceptual and aesthetic concerns. This will include how starting bronze casting in the 1950s enabled Hepworth to create new forms and how, later in life, she experimented with new materials such as lead crystal and aluminium. On display will be The Hepworth Wakefield’s unique collection of 44 surviving prototypes in plaster, aluminium and wood, many of which show the marks of Hepworth’s own hand and tools. These will be shown with a specially commissioned intervention by artist Veronica Ryan, the first artist to undertake a residency in Hepworth’s old studio in St Ives, where the prototypes once stood.

Hepworth’s broader interests – such as dance, theatre, politics, Greek mythology, and science – influenced her sculptures throughout her life. On display will be archive photographs of the 1951 production of Electra at the Old Vic together with Apollo, a metal sculpture that formed part of the stage set, along with costume and set designs for the 1955 opera by Michael Tippett, A Midsummer Marriage, staged in 1955 at the Royal Opera House. This section of the exhibition will also explore Hepworth’s passion for music and dance, and how she captured movement with gestural paintings and sculptures such as Forms in Movement (Galliard) and Curved Form (Pavan).

During the 1960s, Hepworth was a key cultural figure, regularly appearing on film and being photographed by the famous photographers of the day including Lord Snowdon and Ida Kar. She staged major exhibitions, presented work in experimental ways, made large-scale sculptures and explored colour in the patination of bronzes or painted surfaces of her carving. She became an inspiration to a younger generation of female artists, including Bridget Riley whose work she admired, and with whom she exchanged letters. A group of works that show the formal connection between Hepworth and Riley’s work at this time will be shown alongside a section that reveals the influence of the decade of space exploration on Hepworth’s work, from Disc with Strings (Moon) 1969, made the year Neil Armstrong landed on the moon, to Four Hemispheres, inspired by the Telstar satellite.

The final section of the exhibition will look at Hepworth’s last years, featuring her experiments with new materials and techniques, which incorporate bold colours and luminescent surfaces, while consistently seeking to use abstract form to express universal human experiences.