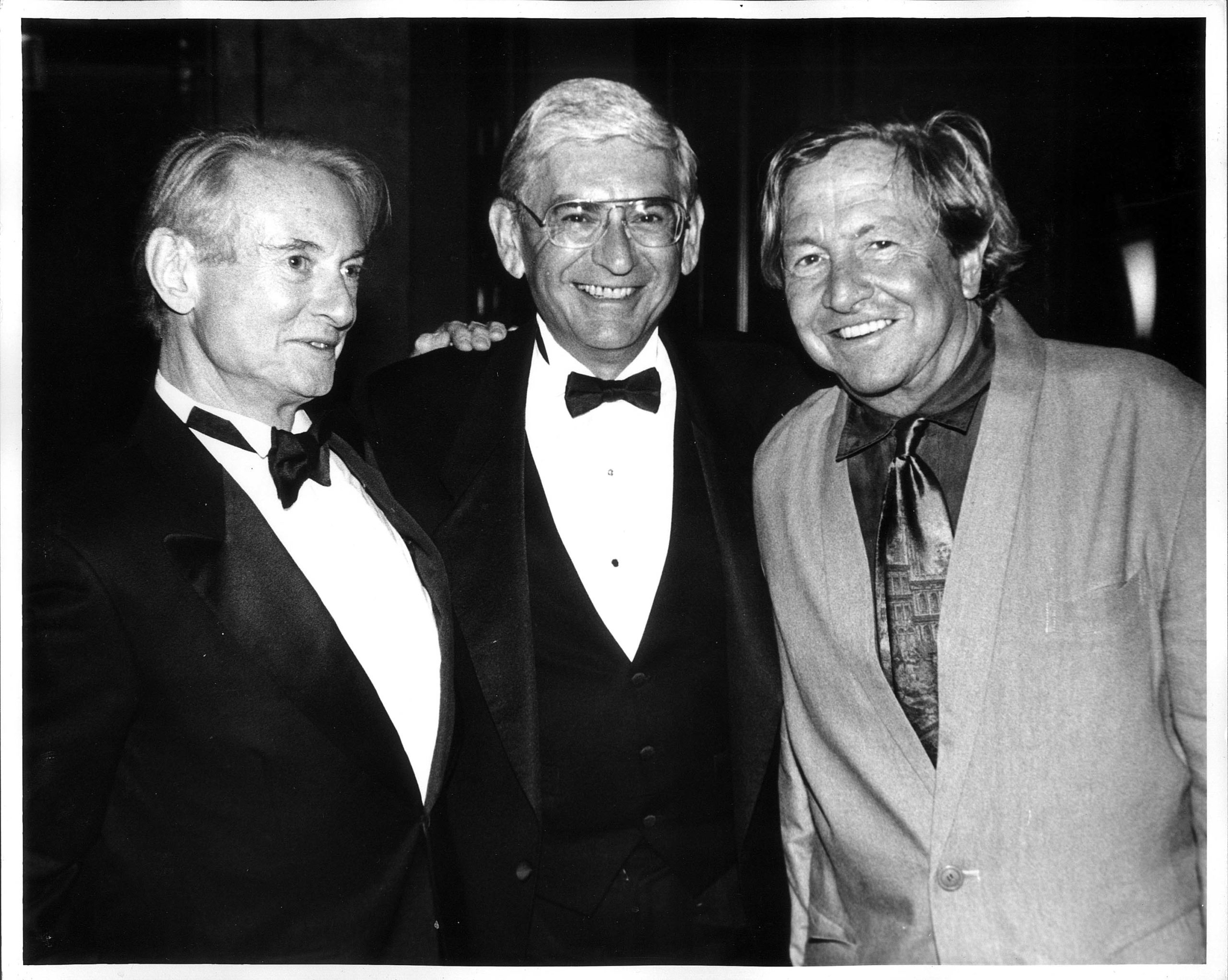 Eli began collecting art under the guidance of famed MCA executive Taft Schrieber, who encouraged the Broads to buy their first major work, a Van Gogh ink drawing, at an auction in 1972. Within a few years of purchasing the Van Gogh, the Broads shifted their collecting to focus on contemporary art after they realized that the best art collections were built by acquiring the work of their time. Eli also discovered he enjoyed meeting the (still-living) artists. As he liked to say, “If I had to spend all my time with businessmen, lawyers and accountants, I’d be bored.”

Focusing on contemporary art also let Eli do what he most enjoyed—build institutions. In the late 1970s, Eli joined forces with fellow Los Angeles collector Marcia Weisman to help create a contemporary art museum for Los Angeles. Eli believed that the city that had given him so much—a chance to grow two businesses without the benefit of the right connections—deserved a great contemporary art museum. Weisman, along with Eli and several others, eventually convinced Los Angeles Mayor Tom Bradley to aggregate developer fees—commercial builders were required by city law to give 1.5 percent of their budgets to public art—to build a museum. Eli led a fundraising campaign that soon raised $13 million—including $1 million from him and Edye—for the Museum of Contemporary Art, Los Angeles (MOCA).

Eli also helped secure the cornerstone of MOCA’s art collection using his skill for negotiation. Count Guiseppe Biumo di Panza, a board member of MOCA, had to sell 80 works from his vast collection of contemporary art due to a change in Italian tax law. Sotheby’s and Christie’s estimated that the trove—including seven Rothkos, 12 Klines, 11 Rauschenbergs, four Lichtensteins, eight Rosenquists, and 16 Segal sculptures, among others—would raise between $11 million and $15 million at auction. But Panza hated the idea of selling at an auction because the art would be sold piecemeal; he wanted the works to stay together as a collection.

Eli knew it was the perfect opportunity for MOCA, but his fellow trustees balked at the idea of dipping into their relatively tight budget for the collection. Broad persuaded them by emphasizing that it was an incredibly rare opportunity for a museum to buy in bulk and collect in depth with one purchase. He also hinted that, if the museum didn’t pony up, plenty of other private collectors might, including Eli himself. The trustees authorized him to make the purchase for no more than $12 million.

Within 24 hours, Eli negotiated the deal with Panza, managing to come in at $11 million for the collection with $2 million down, instead of the higher amount Panza wanted up front. Eli convinced Panza that a lower down payment would yield more money for him in the end because of the inflation of Italian currency. Today, the collection is worth more than $1 billion.

MOCA was the first of several efforts by Eli to support the revitalization of downtown Los Angeles, which had gone from a once vibrant commercial center in the early 1900s to a relatively under-developed region by the end of the 20th century. When Eli and Edye moved to the city in 1963, both were surprised by Los Angeles’ lack of a true civic center, in dramatic contrast to other major cities around the globe. Eli believed early on that his adopted home city required such a center if it were to be a major world metropolis. He seized every opportunity to help make that happen over the next several decades.

Within a few years of MOCA’s opening, Lillian Disney, the widow of famed animator Walt, donated $25 million to build a concert hall a block north of MOCA on Grand Avenue. But by the middle of the 1990s, no hall had been built because the city had been unable to raise the additional funds needed to execute architect Frank Gehry’s dramatic vision for the hall.

Mayor Richard Riordan—a friend of Eli’s since the 1970s, when both served on the board of Pitzer College in Claremont, California—approached Eli with a request to help raise the $200 million needed to create the hall. Eli accepted.

Eli’s pitch to potential donors was not about the symphony—it was about creating a monument as renowned as the Eiffel Tower or the Sydney Opera House for the city he loved. He promised donors that their money would go only toward construction—not toward fundraising gimmicks like free giveaways or mailings—and that money would be returned if the hall wasn’t built.

The pitch worked. As Riordan told the Los Angeles Times, Eli Broad was “the brightest guy I know. He’s a maniac for getting things done.” Within six months, Eli had raised nearly $100 million, and he and his team went on to raise nearly triple that, invigorating philanthropy in Los Angeles in the process. There were hiccups along the way, but the hall became exactly the landmark Broad imaged it would be. As Gehry said when Walt Disney Concert Hall opened, “You’ve all heard that Eli and I have been at each other but look at what we’ve built. The result is beautiful, and we’re both proud of it.”

While Disney Hall was under construction, it became clearer to Eli that Grand Avenue needed more than just new institutions—it needed a unified development plan. Various parcels were owned by the city, others by the county, and the two local governments had never worked together on anything beyond a joint crime lab.

Getting the city and county to collaborate would take a great effort. Eli was well-suited to the challenge. As his SunAmerica successor Jay Wintrob, who started his business career as Eli’s assistant and went on to serve as president and CEO of AIG Life and Retirement, said, “Eli is a marathoner…. He never shows impatience. He pushes but never looks desperate. He is just very good, very detail-oriented, a fantastic deal doer.”

After more than two years of negotiating, Eli convinced the city and county governments to form a new entity—the Joint Powers Authority—to develop Grand Avenue into a walkable, livable, vibrant stretch of cultural and commercial destinations and residences. By centralizing authority over Grand Avenue, Eli not only helped bring the two local governments together for the first time, but he also assured that development was less likely to be stymied by bureaucratic procedure.

Ultimately, what thwarted the Grand Avenue Project for several years was the 2008 financial crisis. (During the same crisis, The Broad Foundation saved MOCA from financial collapse with a $30 million grant.) Before funds dried up in the recession, however, Eli managed to secure a nonrefundable down payment from the developer, Related Companies. The $50 million plus interest went to creating Grand Park, connecting the Music Center with City Hall and becoming one of the rare green spaces in downtown Los Angeles. Today, Grand Avenue is home to major architectural landmarks—including Arata Isozaki’s MOCA, the cathedral by Jose Rafael Moneo, an arts high school by Wolf Prix, and of course Gehry’s Disney Hall—and the mile-long stretch received millions of visitors a year (prior to the Covid-19 pandemic).

While Grand Avenue redevelopment stalled, Eli was busy planning what he hoped would be an especially long-lasting legacy—a contemporary art museum devoted to showing the more than 2,000 artworks he and Edye had collected since their Van Gogh purchase in 1972.

Considered among the most prominent and important holdings of postwar and contemporary art in the world, the collections include in-depth representations from artists including Jeff Koons, Cindy Sherman, Roy Lichtenstein, Joseph Beuys, and dozens of others. Eli and Edye had collected while also supporting museums for decades—they gave $60 million to the Los Angeles County Museum of Art for the Renzo Piano-designed Broad Contemporary Art Museum, $33 million for the Broad Art Museum at MSU by Zaha Hadid and $23 million to UCLA for the Broad Art Center by Richard Meier, along with sizeable donations to New York’s Museum of Modern Art. The Broads had also supported their home city in a variety of other ways—helping to bring the Democratic National Convention to town in 2000, striving (unsuccessfully) to attract an NFL team to the city, and making attempts to buy the Dodgers and the Los Angeles Times (twice) when both were in difficult ownership situations.

In 2010, with Grand Avenue’s development stalled due to the recession, Eli and Edye decided to build their own museum on Grand Avenue, across the street from Disney Hall and MOCA. Holding an architectural competition for the museum, Eli emphasized that the museum would have to pursue a delicate balancing act—refrain from clashing with Disney Hall across the street while refusing to be an anonymous building.

The winning architects, Diller Scofidio + Renfro, proposed an idea that captured Eli and Edye’s vision of a public museum built around a private collection. Diller’s “vault and veil” design included a dark, sculptural “vault” in the center of the museum to hold the Broads’ collection, while the museum itself was wrapped in a honeycomb “veil” allowing glimpses of the museum from Grand Avenue.

The museum, called simply The Broad, opened to international attention and acclaim on September 20, 2015, offering free general admission. For the Broads, the museum was the ultimate gift to their home city. “The city’s been good to me,” Broad always said. “And I want to give back.”