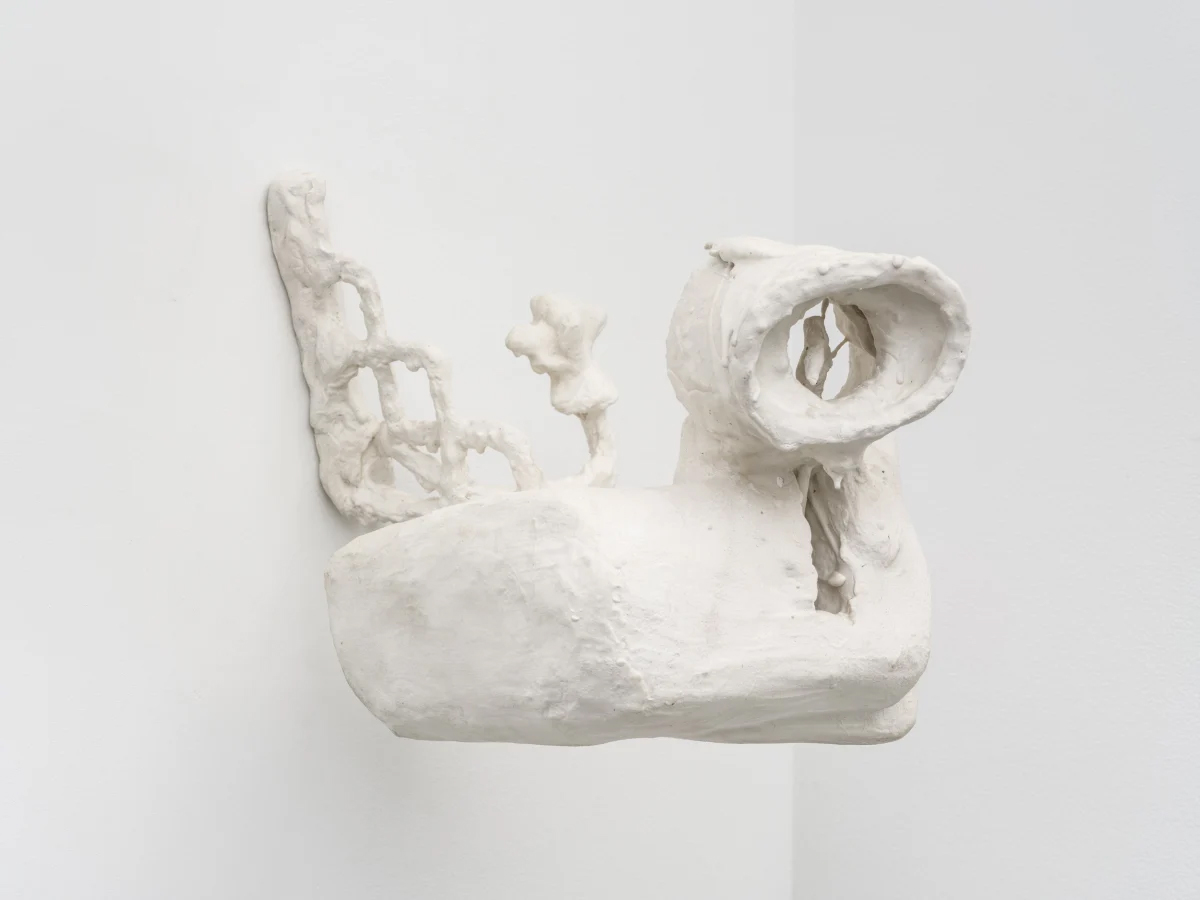 In WORKLIGHT, a title obtained from a scrap of plastic the artist found while crossing an intersection on his daily bike ride to the studio, Charles Long presents a new body of assemblage works playing with the openness of consciousness (light) against the seeming limits of physical material (work). This dichotomy unfolds Long’s relationship with the processes of time, the flow between inner and outer experience, and the building up and breaking down of realities.

With production commencing at the start of quarantine, Long’s studio quietude allowed for a detox of mind and an organic accrual of new forms and practices. The path between his home and studio acted as an art supply store of the uncanny, paralleling the dreamlike corridor inwards amid accumulating seclusion. The seventeen sculptures that comprise this year-long investigation reveal individual forms that act as fossils or accretions of lost time. These chimerical bodies move from geological to mechanical, erotic to the mundane, mineral to animal, and architectural to cosmological. Some appear milky and melted, only to burst open with crystalline precision. Others are chaotic and formless, gathering into something insistently specific, only to collapse again into the unnamable, left to be perceived as a fraction of a moment caught between two eternities.

WORKLIGHT is laid out in nearly chronological order to its making. In the front gallery space, a wall-mounted sculpture, The Oracle, 2020, grew out of scavenged, disinterred detritus, commingled with fragments of strange quarantine dreams. The white, shell-like surface submerges the origins and identities of its parts, as layer upon layer of white plaster fuses with diverse forms into one illusive body, creating a cohesive but coalescent artifact. This initial way of engaging material and time became the method for the works that followed. Like The Oracle, these enigmatic forms each present their riddle, one whose answer lies with the beholder.

Hung throughout the space are metaphorical work-lights: mounted beacons, camera-like and observational, created with plaster, dumpster treasure, parts of older sculptures, plant material, and unique pieces of venetian glassware the artist inherited from his grandmother. Six of these work-lights function as speakers whose vibrations create an ambient pathway through the space. Long partnered with the studio of experimental trumpeter and composer Jon Hassell to create an aural landscape for the sculptures to inhabit. The 30-minute composition featuring Hassell, Rick Cox and Luke Schwartz embodies Hassell’s “Fourth World” sound, as both primitive and futurist. Hassell’s work has been influential to Long’s practice since his art school days in Philadelphia.

In the main gallery, visitors are met with large installations that transform the space with light, movement, and Long’s own subjective memories. On the back wall, Azazel (after Rogier van der Weyden’s Crucifixion with the Virgin and St. John, c. 1460), 2021, references a historical painting that Long would visit recurrently in his formative years exploring the Philadelphia Museum of Art. New figuration replaces the religious subjects of the diptych with what Long refers to as monads. Monads have been a consistent and important motif in Long’s oeuvre and can be found throughout the exhibition.

For the five works employing reflected light, Long combines the optical with the sculptural as fields of mirrored, crystalline growths sprout and redirect light into organized patterns appearing on proximate surfaces. Each of these sculptures has a unique identity, ruptured by chaotic transfiguration. These eruptions appear unsystematic, though they are faithfully precise to their purpose, as they angle their refraction to form cogent glyphs. Crafted by a process of merging the individual letters of a specific word into one symbol, these glyphs of light form what are historically known as sigils, where the maker maintains a state of mind where what would have been wished-for is known to already exist. In WRKLT: make, 2021, the sigil for the word ‘make’ appears upon the surface of a totem where the myriad light fragments can be seen as either assembling or in the process of disintegrating. Extending into the final, darkened gallery, the sculpture creating the sigil for ‘believe’ can be spun by the viewer so that the sigil disintegrates and scatters throughout the room, becoming stars on the ceiling. When the five reflective works are imagined all together, they form this sentence: ‘make believe our exile’s chosen,’ an advocation of the imagination as a pathway to find illumination in darkness.