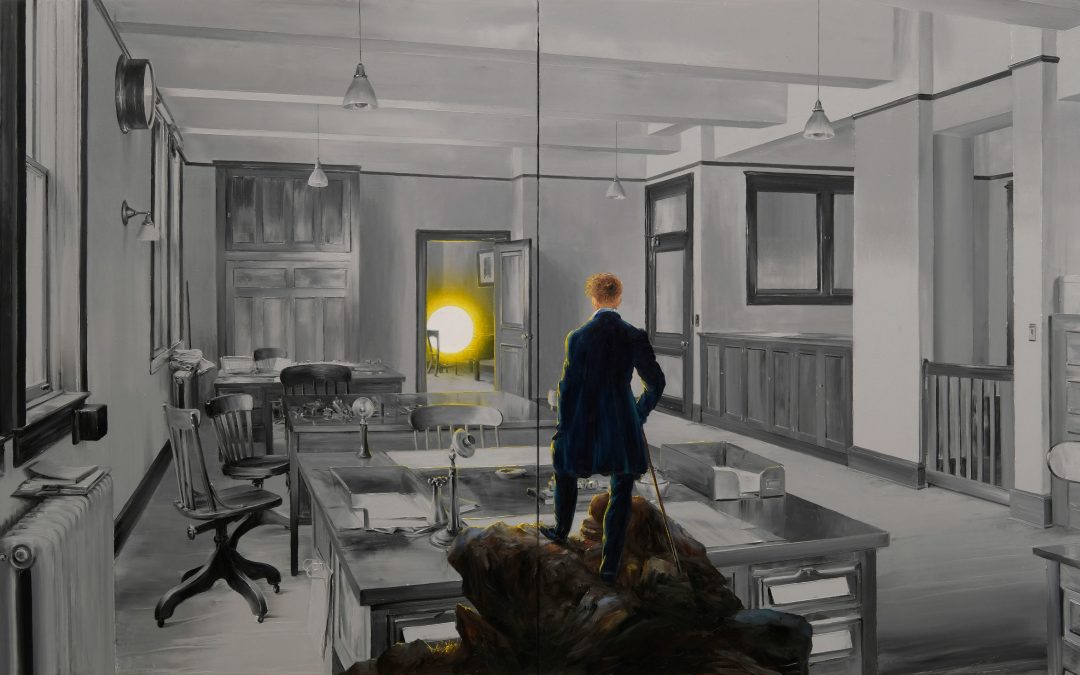 Paco Pomet‘s paintings are a strange mix of the real and the surreal. In his exhibition Beginnings, he inserts small, brightly colored painted elements into monochrome representations that appear to be culled from a 1950s image archive. Pomet has a knack for altering found images and creating unexpected juxtapositions that both contemporize the original and change its meaning. The works become cutting and humorous commentaries on society today.

Fake (all works 2020 unless noted) is a sepia-toned painting of a man with a monkey’s head standing in front of an easel, painting a picture of a banana. The dapperly dressed man/ape hybrid wears a suit coat and top hat and stares out at the viewer rather than at his creation. The only saturated color in the work is the banana which is a realistic yellow. Below it, Pomet has inscribed the text “Ceci n’est pas un”, an obvious homage to the artist René Magritte. 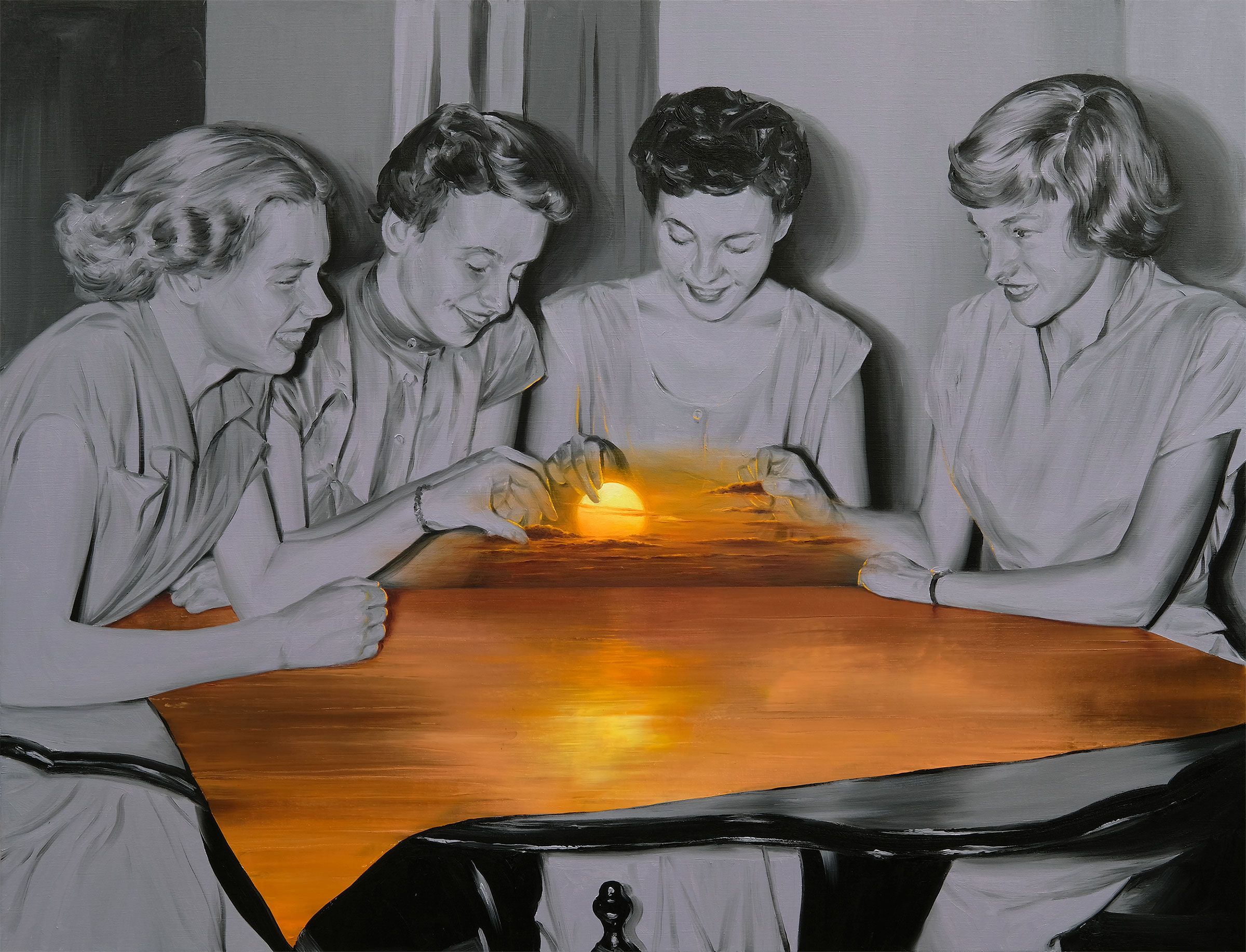 Another art historical reference appears in Das Erhabene Buro. Here, Pomet has carefully reproduced the figure from Caspar David Friedrich‘s Wanderer above the Sea of Fog (1817), a painting that expresses the awe of nature and the sublime. Rather than have the figure gaze out at the sea, Pomet places him in an empty office space equipped with large wooden desks, chairs and antique phones. Seen through an open door, hovering in a back room is a bright round yellow ball whose intense luminosity resembles the sun. While this light casts a glow on the scene, it is difficult to discern if it represents the sublime, or a vision of impending danger. 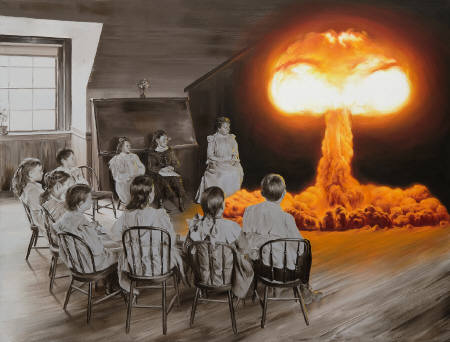 In The Lesson, Pomet again begins with a sepia-toned historical image of an instructor and a group of children sitting in wood-backed chairs in what appears to be a classroom staring at a brightly painted glowing orange mushroom cloud that has been placed into the scene. Hesperides depicts a group of four smiling young women in 1950’s style dresses seated at a table. Their hands carefully grasp miniature clouds and a sun across a sunset colored tablecloth that has been transformed into an expanse of sky. The table’s edge forms the horizon line. The image is Pomet’s representation of the Hesperides — nymphs of the evening amidst the golden light of sunset. Little Big Grief is a more humorous work illustrating (a presumed) 19th Century pastoral boating scene into which Pomet inserts a monumentally-sized ball that radiates an orange glow onto the scene. This personified, though featureless, sphere with cartoony arms and submerged feet, is bent over as if glum or contemplating— an uncanny and oblivious anomaly disrupting the otherwise pleasant scene. 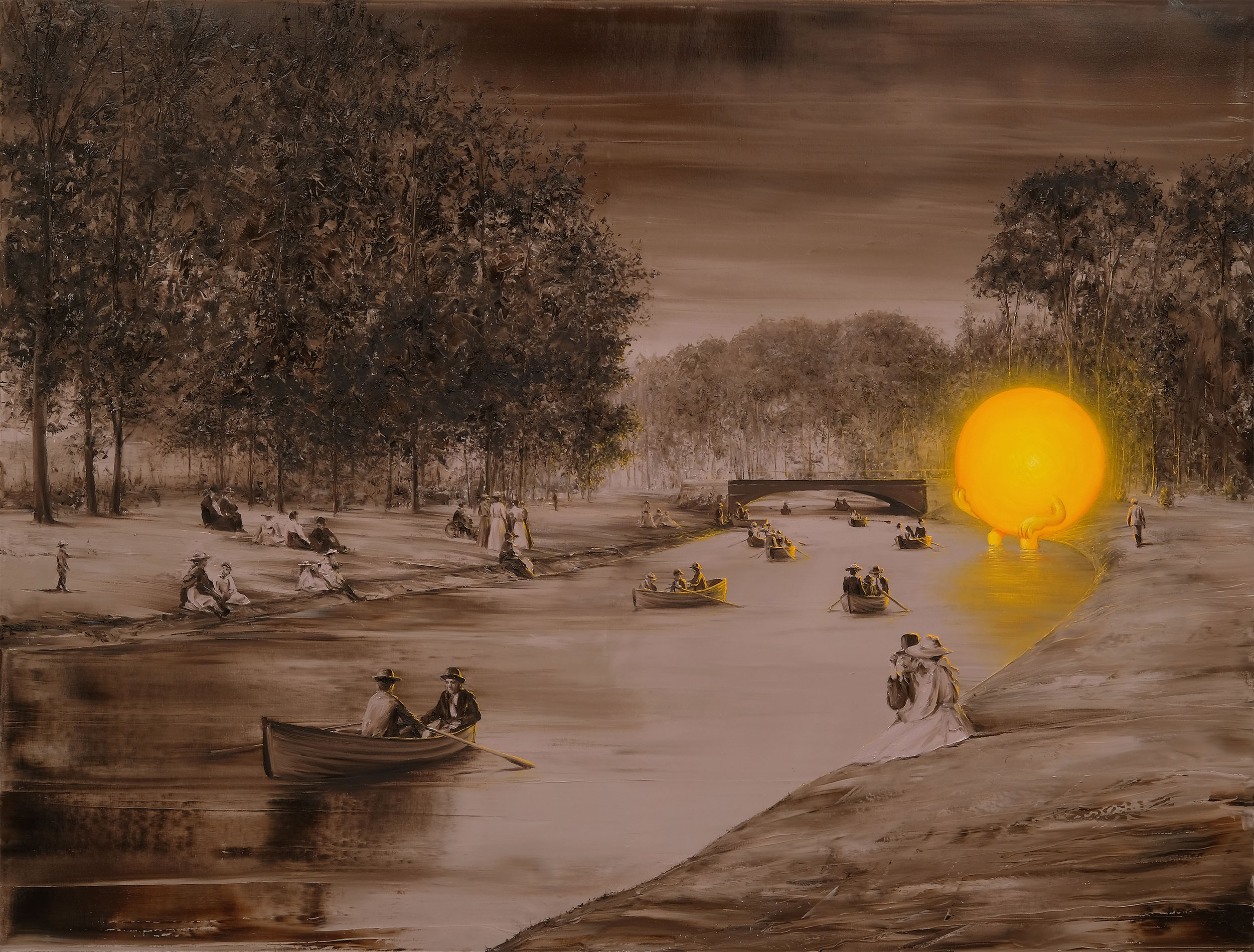 While monochromatic backgrounds with superimposed glowing, orange-yellow circles predominate in the exhibition, Pomet also includes paintings like Middle Age Crisis (2021), in which a flatly painted blue, black and white cartoon version of a running businessman is inserted between two more realistically rendered jogging youths. In The Distance, the neckties of two walking, briefcase-carrying businessmen are adjoined and transformed into a bright orange sash that connects the figures and makes them dependent on each other. If one pulled too hard or got too far ahead, the other could choke. These slightly disturbing, enigmatic images are impossible scenarios with a tinge of what if? They evoke feelings of unsettledness because of their absurdity. 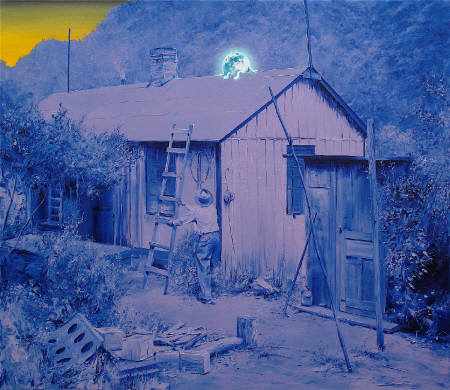 Pomet purposely disrupts carefully rendered scenes that have been drained of color to create paintings that are simultaneously elegant, charged and mysterious. His works are filled with surprises — fragments from other pictures, landscapes or the internet— taken out of context and inserted into the scenes to give pause and stimulate viewers to think about the relationship between past and present, life and death, endings and beginnings. Though much of his source imagery comes from the past, the paintings live in the present and are thoughtful and compelling reminders of our fragile world.