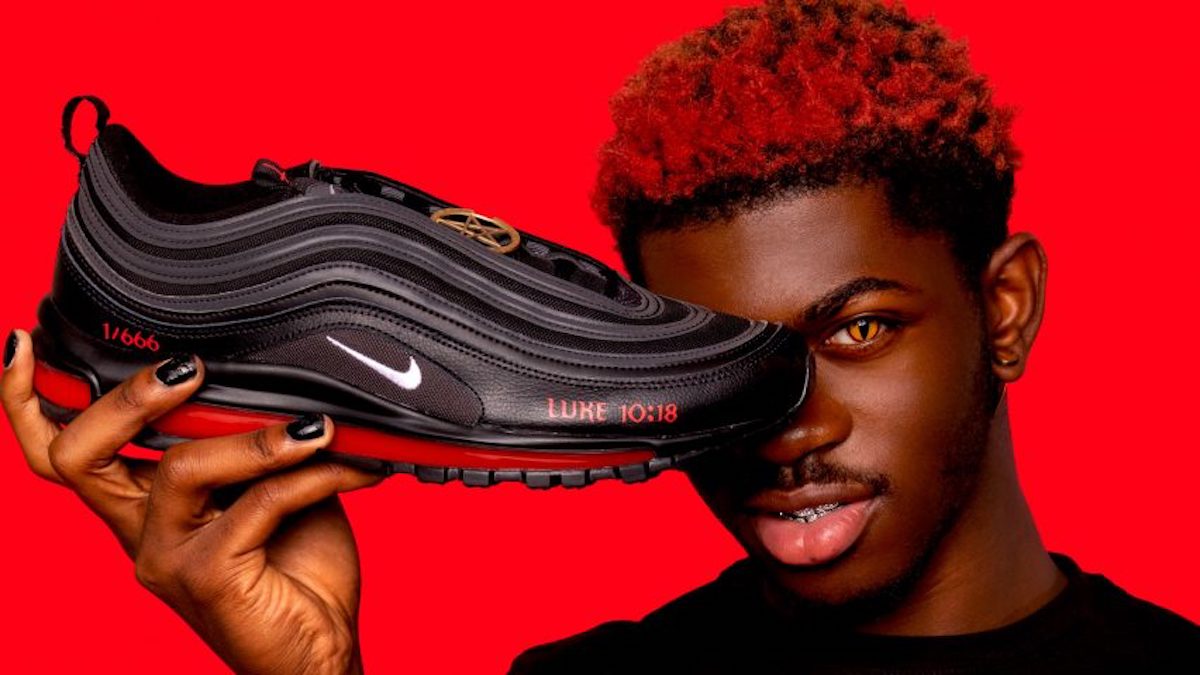 MSCHF, a Brooklyn based artist collective, have lost their case against Nike after producing and selling a controversial line of modified Nike Air Max 97 shoes titled, ‘Satan Shoes’ which contained a drop of real human blood in the soles. Nike stated in their case that the shoes were an infringement of their trademark and must be removed from sale.

This latest artwork a collaboration with rapper Lil Nas X. MSCHF have released a modified Nike Air Max 97 shoe called Satan Shoes in an edition of 666. The shoes were offered online for USD 1,018, in an apparent reference to Bible verse Luke 10:18. They featured a bronze pentagram, an inverted cross and a drop of real human blood in their sole and sold out in the first minutes of being available for sale. Nike, soon after announced that they were suing MSCHF for trademark infringement.The collective was founded in 2016 by Gabriel Whaley, who acts as its CEO. This is the same group that purchased a Damien Hirst spot print and sold off the segments. Severed Spots was purchased for USD 30,000. The work was then cut and sold as individual spots for $480 each. A second work consisting of the leftover paper, titled 88 Holes, sold for USD 261,400. This year the collective created “Birkenstocks,” a line of sandals made from cut-up Hermes Birkin bags.

The case was heard earlier in the week and the judge ruled that MSCHF must stop fulfilling orders for its “Satan Shoes” in a trademark infringement lawsuit brought by Nike.

Nike filed for a temporary restraining order Tuesday, asking the court to keep MSCHF from issuing orders using any Nike work and referring to Nike’s logos. The ruling is a hit for MSCHF, which sold out of its “Satan Shoes” within minutes of their launch Monday.

MSCHF was reported to have received USD 11.5 million in funding. It has reported its value as being USD 200 million, following a private funding deal with the venture capital group Founders Fund.

The release of the “Satan Shoes” over the Easter period coincides with Lil Nas X’s latest single, “Montero (Call Me By Your Name),” and its accompanying music video. In the video, Lil Nas X, an openly gay recording artist whose real name is Montero Lamar Hill, is seduced out of what appears to be the Garden of Eden, falls into hell and gives the devil a lap dance. The music video, which has been viewed more than 50 million times since Friday.

MSCHF released the following statement: The following is an official statement regarding the court case between MSCHF and Nike. MSCHF is a conceptual art collective known for interventions that engage fashion, art, tech, and capitalism in various, often unexpected, mediums.  We believe it is better to make art that participates directly in its subject matter; it is stronger to do a thing, than to talk about a thing. MSCHF makes artworks that live directly in the systems they critique, instead of hiding inside whitewalled galleries. There is no better way to start a conversation about consumer culture than by participating in consumer culture. We choose a specific medium to engage with a specific subject matter: we will make shoes, stream video, publish books, make paintings and sculpture, build apps or web services– everything is in service to the concept. MSCHF is fully context chameleonic. Over a year ago we released the Jesus Shoes. As a manifested speculative artwork Jesus Shoes conflates celebrity collab culture and brand worship with religious worship into a limited edition line of art objects. Last week’s release of the Satan Shoes, in collaboration with Lil Nas X, was no different. Satan Shoes started a conversation, while also living natively in its space. It is art created for people to observe, speculate on, purchase, and own. Heresy only exists in relation to doctrine: who is Nike to censor one but not the other? Satan is as much part of the art historical canon as Jesus, from Renaissance Hellmouths to Milton. Satan exists as the challenger to the ultimate authority. We were delighted to work with Lil Nas X on Satan Shoes and continue this dialogue.