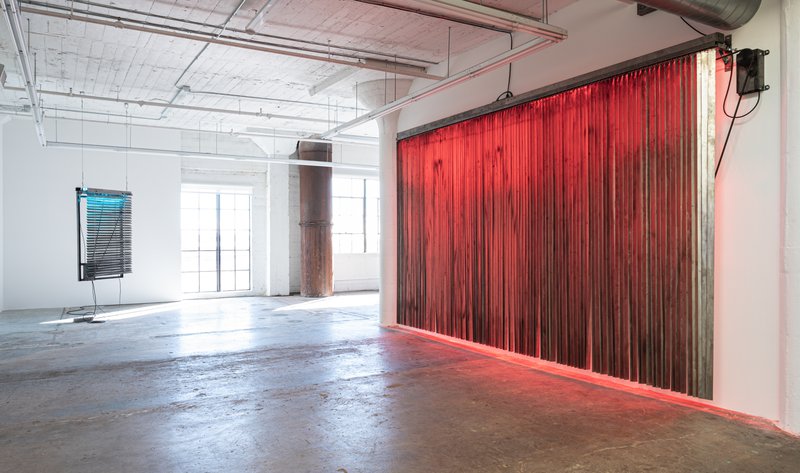 Upon entry to the gallery, a sensor is triggered that begins an eight-minute sequence of subtle movements of hand-crafted Venetian blinds. Soft, whirling clanging mechanical sounds envelope the slightly darkened space as the automated kinetic sculptures begin their choreographed movement. Each of Stephen Neidich‘s ten blinds can be thought of as a mechanical monochromatic painting created with LED lights. Though most are attached to the wall, one titled But they should never be buildings (all works 2021) hangs from the ceiling to allow both its front and back sides to be viewed. As the blinds move up and down, their apparatus — carefully positioned chains, cables, idlers and motor boxes — comes into view. 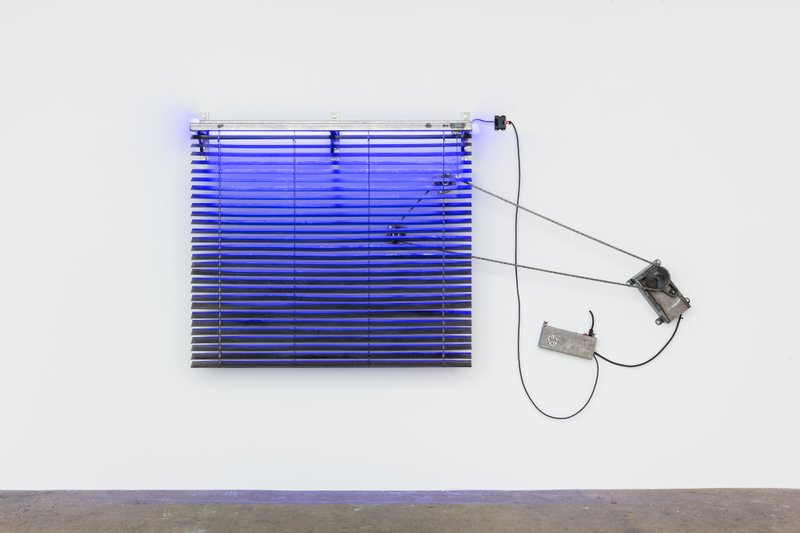 No yelling on the bus

The largest work in the exhibition spanning 117 x 209 inches is The birds, a vertical rather than horizontal blind. Like the others, it is fit with a strip of glowing LED lights along the top. In this piece, LEDs cast red-toned hues on the steel slats, as well as the concrete floor, referencing the colors of an explosion, fire or sunset. When fully extended, the work appears to be an undulating red wall that shimmers from its own internal light. As it begins to compress, the slats slide to the left along their upper carriage, propelled by a long, motorized chain that is attached to the wall in a ‘W’ pattern. Like most vertical blinds, the motion is not seamless and in Neidich’s creations, he allows for imperfections in the movement which in turn produce sound. 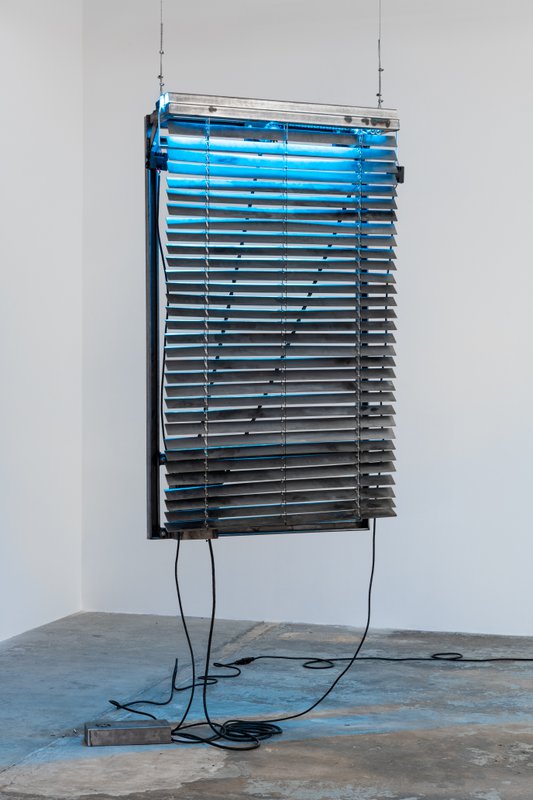 But they should never be buildings

As the viewer’s eye shifts from yellow to orange to red to blue to green to pink and finally to purple it becomes apparent that Neidich has organized a rainbow progression of colors within the space. The calm and joy associated with rainbows suddenly pervades. Though each piece is a constructed creation assembled from large and weighty mechanical parts, the works are remarkably light and playful. As they open and close in relation to one another, the space is filled with a symphonic resonance. Niedich enhances that playfulness in I can tie a trucker hitch in my sleep by inserting a hinge that creates a peep hole or separation in the otherwise parallel horizontal slats. The chain loops diagonally behind the piece which never fully opens. You keep letting me down is the only double blind with red LEDs that ebbs and flows out of synch. Though partners, the two columns move up and down to their own beat. 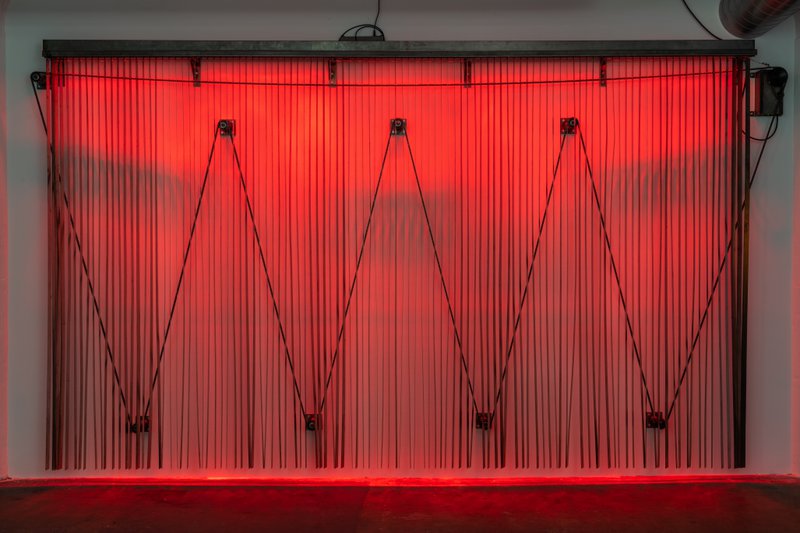 The installation calls to mind an artist like Alan Rath who also allowed the cords, speakers and machine parts that drove his sophisticated digital works to be an integral part of the pieces. Like Rath, Neidich’s installation has a low tech/high tech aura. The works are sequenced to perform by a complex algorithm, yet at the same time, what appears on the wall is only the hardware necessary for their movements. The arrangement of all the various parts and objects on the wall or floor should be seen as part of a three-dimensional drawing. 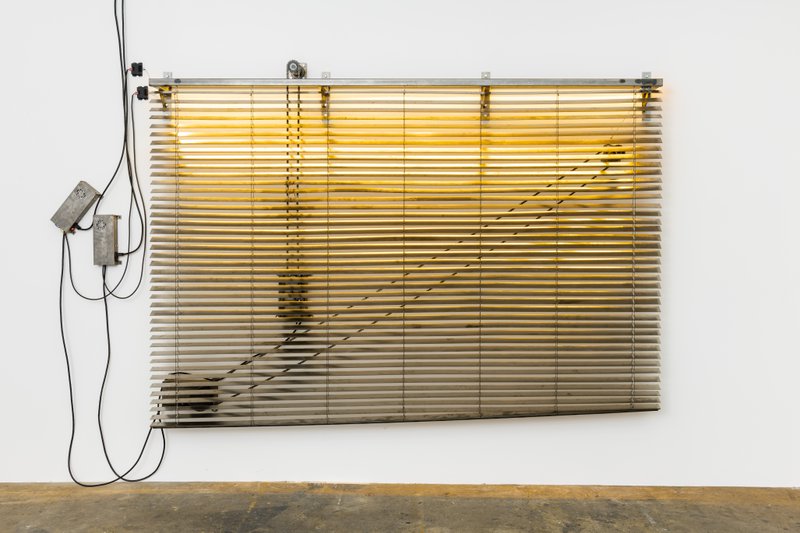 I can tie a trucker hitch in my sleep

While it may be possible to reverse engineer how Neidich’s blinds operate, that is a futile endeavor. Better to be swallowed whole by the experience and listen to the sounds of chains propelling steel forward and back while noticing how those movements change the aura of light within the space. The overall impression might be an ever-changing rainbow, yet, the pieces emanate from a darker place. During the year of COVID, blinds separated us from our neighbors and the outside world. As we kept it all out, as well as keeping ourselves separated from the world, we longed for connection and color and sound. Neidich’s harshly mechanical installation takes viewers on a journey that allows them to move beyond the confines of these self-imposed barriers. 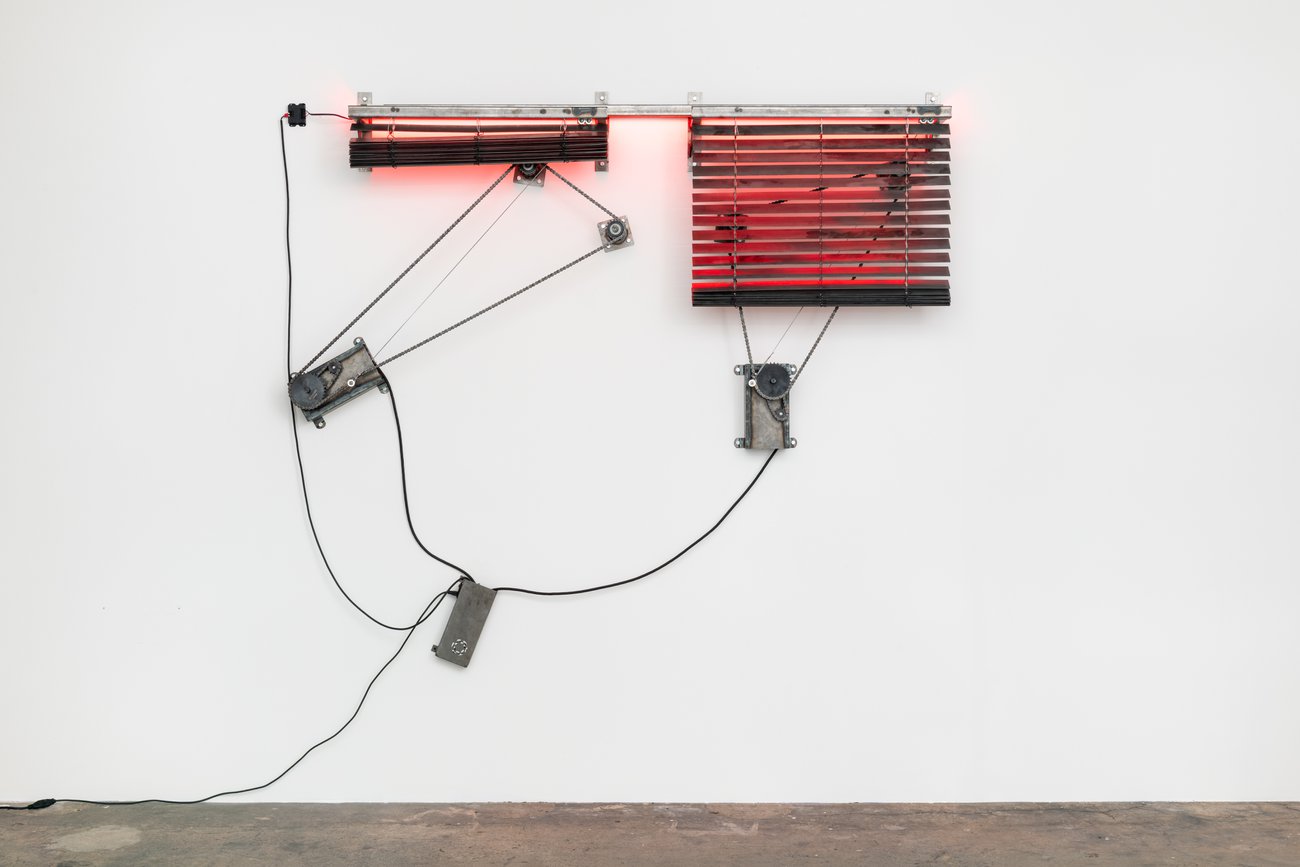 You keep letting me down