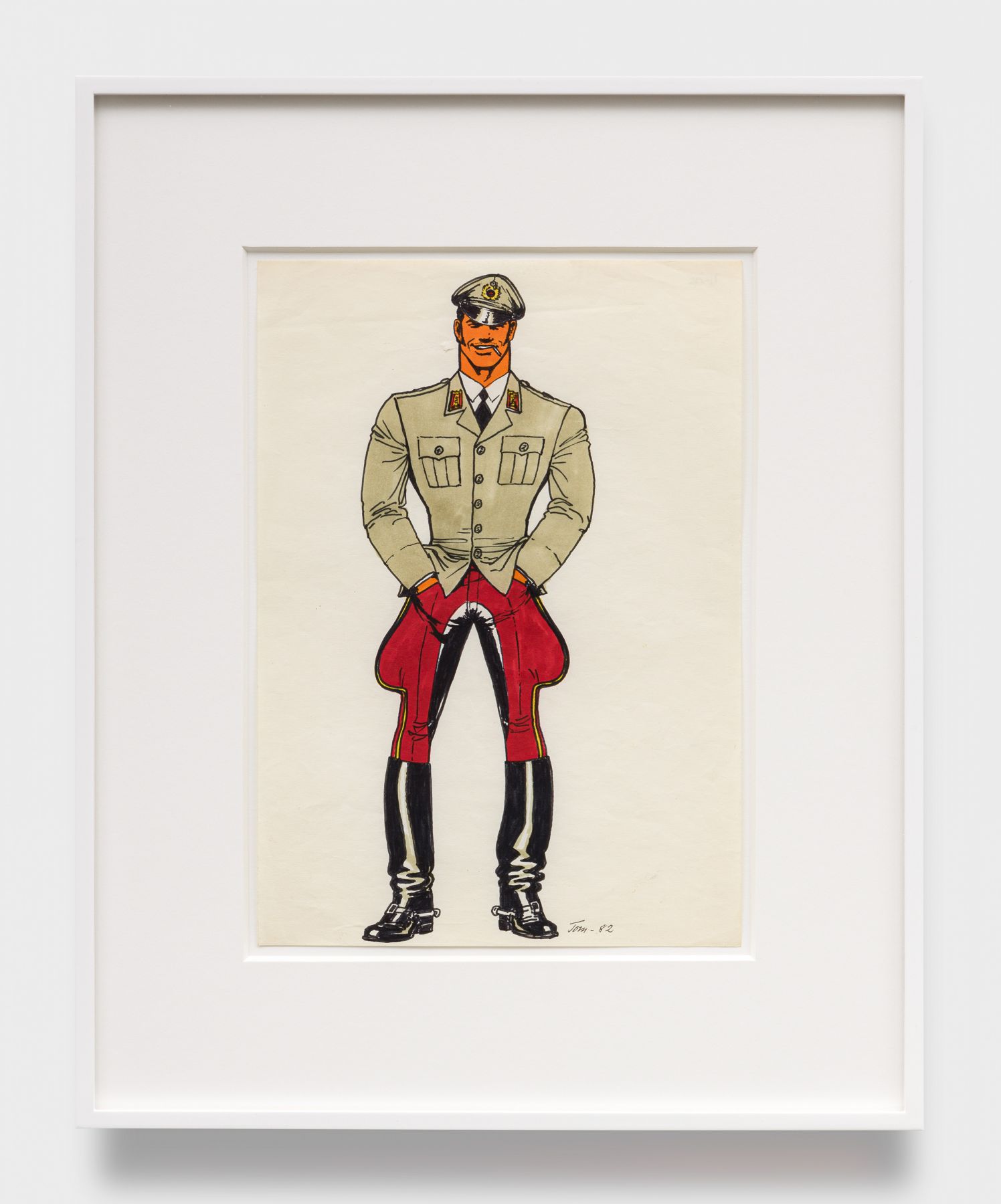 David Kordansky Gallery’s exhibit Tom of Finland: Pen and Ink 1965 – 1989 showcases drawings in a range of media, including pencil, pen, ink, marker, and gouache. Together, these pictures demonstrate the breadth of graphic production key to Tom of Finland’s creative output throughout his lifetime. Curated in close collaboration with Tom of Finland Foundation, the exhibition will be on view through May 1, 2021.

Tom of Finland (Touko Laaksonen, Finnish; b. May 8, 1920, d. November 7, 1991) has long been recognized as one of the twentieth century’s great visual innovators. A masterful draftsman, Tom produced an expressive body of work that depicts masculine, empowered gay men fully enjoying their sexuality, engulfed in intimate moments of unabashed joy and pleasure. This exhibition showcases the artist’s diverse material approaches to his meticulous figurations—including sharp pen and marker linework, ink washes, and delicate pencil shading—that exemplify the boldness of his vision and the virtuoso qualities of his hand. With their skillful observation of light and classical composition, and their images of muscular men engaged in complex motions, the drawings reveal formal concerns that call to mind the work of Caravaggio and Rembrandt.

Based on graphite renderings and preparatory sketches, Tom’s inked works were made using black pen and marker for the purpose of reproduction in publications. The printed medium provided a space for Tom to produce and disseminate his fantasies in the fullest possible capacity. An important precursor for many later underground LGBTQ zines, Tom’s work was presented in graphic novels such as Trucker’s Delivery (1965), Sightseeing the Guards (1973), Circus (1975), Greasy Rider (1978), and perhaps most notably, the collection of 26 Kake comics (1968–1986) titled after the namesake protagonist—the artist’s recurring alter ego. A pen and ink picture from Kake in the Wild West (1982), for instance, shows the escapades of a leatherclad Kake in a cowboy western bar, documenting the convergence of two gay communities in an era still grappling with the criminalization of homosexual love. Tom radically hijacked traditional masculine roles; throughout the show, his emboldened cowboys, sailors, and bikers engage in couplings at turns boisterous, erotic, idyllic, and tender. press@davidkordanskygallery.com www.davidkordanskygallery.com T: 323.935.3030 F: 323.935.3031

Throughout his body of work, Tom gave legendary form to an imaginative universe that helped fuel real-world liberation movements and enabled gay men to have agency over their sexuality in new ways. His revolutionary representations of the male body responded to his own desires and real-life experiences, drawing from careers in advertising and the military, as well as existences in Finland and Los Angeles. In turn, he not only imagined but also materialized a world that celebrates the boundlessness of desire, inspiring generations of artists and people of all kinds to embrace the empowering, libidinal forces in each of us.