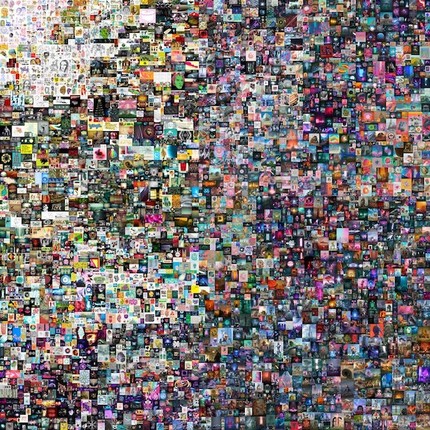 Just days after multivalent musician and artist Grimes raked in $6 million selling digital artworks variously featuring cherubs, swords, and ethereal pop soundtracks, and weeks after Chris Torres’s Nyan Cat, a vivid GIF depicting a cat with a Pop-Tart body and emitting a rainbow vapor trail, brought its creator nearly $600,000, a single JPEG by digital artist Beeple fetched $69.3 million at auction. The sale, conducted by venerable auction house Christie’s, awarded the unnamed buyer ownership of Beeple’s Everydays—The First 5000 Days, 2021, a digital collage of every image the artist has posted online since 2007. The figure commanded surpassed auction records set by art by the likes of J.M.W. Turner, Georges Seurat, and Francisco Goya and was the third-highest auction price achieved for a living artist, after Jeff Koons and David Hockney, according to the New York Times.

Beeple’s work was “minted” (to use the common parlance) as a nonfungible token, or NFT, ownership of which grants the purchaser access to the work via a highly secure network known as a blockchain and offers proof of both the work’s authenticity and the buyer’s ownership. Such works are typically offered on websites like Makers Place, Nifty Gateway, Open Sea, and Super Rare, and are often paid for with the cryptocurrency Ethereum, which Christie’s announced it would accept for the first time in relation to this particular sale.

The recent excitement surrounding NFTs has prompted an examination of the sustainability of the environmentally irresponsible crypto-art market, as the digital certification process uses a tremendous amount of energy. It has also raised concerns about the stability of the art market itself, with some critics worrying that the speculative market of the much-hyped and physically nebulous work might reasonably call to mind the Dutch tulip mania of the seventeenth century.

Art adviser Todd Levin, who according to the Times witnessed the $450 million sale of Leonardo da Vinci’s Salvatore Mundi at Christie’s in 2017, told the paper, “On the one hand, it’s super exciting to witness a historical inflection point. On the other hand, the amount of money involved could skew and damage a nascent emerging market.”

“The potential for it to disrupt the traditional art auction model is humongous,” said Christie’s Noah Davis, who oversaw the auction. “Will we be offering more NFT artworks? Definitely,” he said. “Does this mean they will replace paintings and sculptures at auction? Absolutely not.”