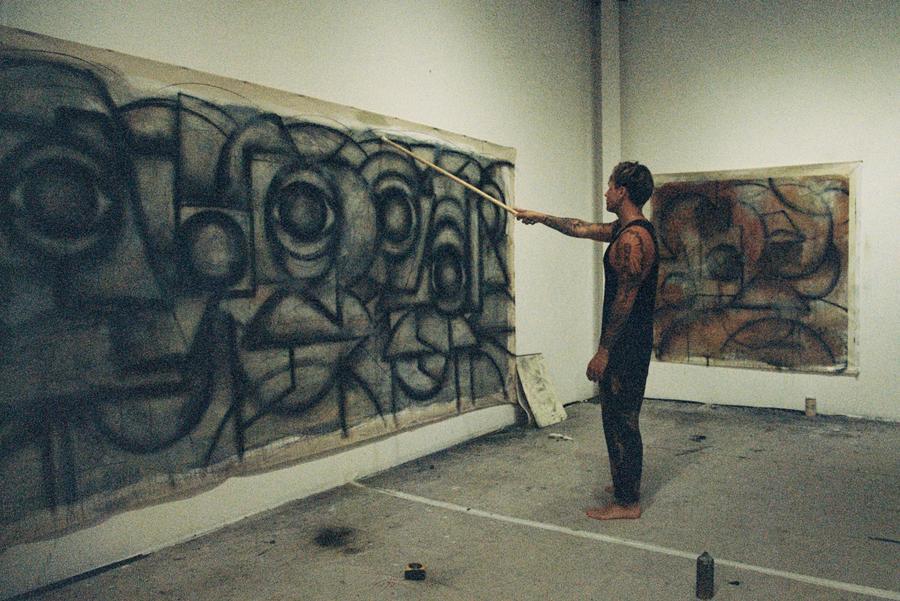 Devon DeJardin in the studio

The second solo exhibition from Los Angeles-based multimedia artist Devon DeJardin opens at DENK gallery in April. Umgestalter will consist of twenty new works on canvas, paper, and sculpture that complement and evolve from the Guardians series that rose DeJardin to prominence in 2018.

Contrasting the figurative fullness of his Guardians series, DeJardin’s new body of abstracted work reflects the current era of pandemic-related strife, and encapsulates the uncertainty faced by all of us, as we wrestle with questions of the future.

The title of the show, Umgestalter, means “shifter of shapes” or the “transformer” in German. It refers to Rilke’s The Man Watching which recollects the biblical story of Jacob wrestling with an angel, and the consequential oncoming storm. Rilke suggests that the struggle with that which outmatches us enables humanity to strive against greater and greater things, calling the coming storm of this showdown Umgestalter.

DeJardin draws on this motif of wrestling with the angels, by reflecting upon his own challenges, and the storms that followed them. Umgestalter speaks to the way DeJardin’s past depression and anxiety have shifted his own shape, alongside the evolution of how he as an artist has abstracted the forms of his Guardians. Simultaneously, it contemplates how the present pandemic has altered the shape of society.

DeJardin’s initial God-like Guardians acted as spiritual custodians, offering universal hope, stability and comforting companionship. In his new works, these part-human, part-animal, part-deity figures have matured to sombre toned geometric forms. In contrast to the bold, deep reds, yellows and purples of the original Guardians, the new paintings adopt storm-like hues, that accurately reflect both this tempestuous period and our stony resilience to it.

Atomizing his Guardians to their elemental shapes, DeJardin tested their strength, if only to understand them. In crafting these new canvases, he arrayed them eight at a time to face him. Caught in the crossfire of their gazes, the artist found himself in a ring of sorts, one in which he, like Rilke’s subject, grappled with his Guardians. Narrowing especially on circles and semicircles, DeJardin looks his Guardians in the eye and braves to ask their names.

To create these works, DeJardin began by painting the bold lines of the Guardians, and then centred in on the core shapes that constituted their beings. He then washed the lines with hoses, smeared cigarettes across the canvases, rubbed them raw and cut them with blades. The abstraction in the new series, then, reflects in part to the viewer also, the accumulation of pain and the storm-scars that shift our own shapes.

Parts of the Umgestalter exhibition body of work manifest in canvas with a colour palette orbiting around slates, tans, and muted indigos. The artist expands the scope of his original Guardians not only through abstraction but by venturing into sculpture and multimedia. Other pieces use paper works and sculpture, with one work featuring stonework and sculpted figures looking to a painting on a large clay tablet. In employing more earthen materials, DeJardin evokes an echo of antiquity and digs for the substances that anchor us in storms to come.

The tenacious Guardians nevertheless stand strong, and through their unrelenting boldness act as an essential message of hope that the storm will eventually pass.