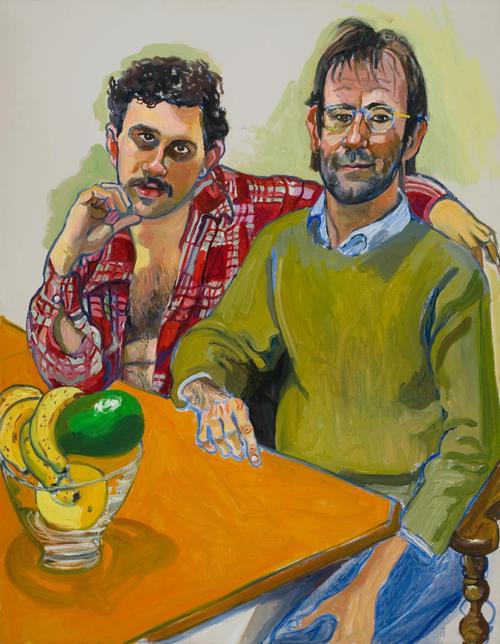 “For me, people come first. I have tried to assert the dignity and eternal importance of the human being.”—Alice Neel, 1950

Alice Neel: People Come First is the first museum retrospective in New York of American artist Alice Neel (1900–1984) in 20 years. This ambitious, career-spanning survey at The Met positions Neel as one of the century’s most radical painters, a champion of social justice whose longstanding commitment to humanist principles inspired her life as well as her art, as demonstrated in the survey’s approximately 100 paintings, drawings, and watercolors. Alice Neel: People Come First will be on view March 22 through August 1, 2021.

“Alice Neel was an outstanding painter whose iconic ‘pictures of people,’ as she called her portraits, radiate her fierce personal belief in humanity’s inherent dignity and her steadfast social conscience,” said Max Hollein, Marina Kellen French Director of The Metropolitan Museum of Art. “This important exhibition places Neel’s life and art within the context of the 20th century, considering them both in relation to the major events and upheavals of the time. Throughout her long career, Neel remained true to her own vision—despite many obstacles—and today her imagery resonates with our own challenging cultural and political circumstances in striking ways.”

Sheena Wagstaff, Leonard A. Lauder Chairman of Modern and Contemporary Art, added: “Neel’s portraits are deeply human: her empathy for the people in her community resulted in paintings of such unflinching intensity it is as if past and present—their time and ours—are brought together in a single moment. Now, when personal histories are crucial to establishing self-identity, Neel’s world tells the stories of human beings from all walks of life in the city she called home. Together they vividly capture the unique character of New York City.”

The exhibition spans the entirety of the artist’s career, from her professional launch in Cuba in the 1920s and her work as part of the W.P.A. in the 1930s, through her resolute commitment to centering the figure in her painting at a time when abstraction was ascendant, in the 1940s and 1950s; her resurgence in the 1960s and 1970s; and the emergence of her “late style” in the 1980s.

In keeping with the artist’s commitment to painting “pictures of people,” which she considered to be historical records of the time in which they were made, the exhibition will feature dozens of Neel’s most striking portraits, celebrated today for their unyielding psychological acumen. The survey also sheds light on her accomplishments in other genres, specifically still lifes, landscapes, and cityscapes. The inclusion of relevant ephemera and personal effects—such as photographs and leftist periodicals to which she contributed drawings—illuminates her relationships, personality, and political convictions as well as her eventual entree into American popular culture. Neel was a longtime resident of New York, and the city served as her most faithful subject. Indeed, the sum total of her work testifies to the drama of its streets, the quotidian beauty of its buildings, and, most importantly, the diversity, resilience, and passion of its residents.

Alice Neel: People Come First presents and interprets the artist’s work in eight sections that highlight her engagement with key subjects that recur over her career. Neel’s connection to New York City is a major focus. Another section groups Neel’s many paintings and drawings of interior spaces, mostly in her own home, an intimate, psychologically charged setting that occasioned still lifes full of drama and personality but also a series of sometimes erotic, sometimes poignant portraits of family members and lovers. The exhibition’s most robust section is devoted to the many bohemians, dissidents, and activists that Neel painted (and with whom she frequently collaborated) over the course of her life, including prominent Black rights leader James Farmer and the Lower East Side gender nonconforming performer Jackie Curtis. Another gallery showcases Neel’s empathetic penchant for rendering bodily and emotional affliction caused by loss, illness, injury, and, in the case of Andy Warhol, an assassination attempt.

One area of the exhibition draws upon select works from The Met collection, such as Vincent van Gogh’s Madame Roulin and Her Baby (1888), Susanne Valadon’s Reclining Nude (1928), and Jacob Lawrence’s Blind Beggars (1938), to shine light on the myriad ways in which Neel’s painting intersected with and also diverged from art historical precedent with regard to both subject and technique. Another section explores Neel’s candid depictions of prepartum and postpartum mothers, which confront one of the most taxing and complex of female experiences. A large gallery features many of the artist’s most provocative, groundbreaking nudes from the 1930s onward, including her nude self-portrait, rendered when she was 80 years old. The exhibition concludes by highlighting Neel’s engagement with abstraction and her formal innovations, drawing particular attention to her embrace of “unfinishedness,” which served ends both aesthetic and allegorical, functioning as a powerful metaphor for beginnings and endings, life and death.