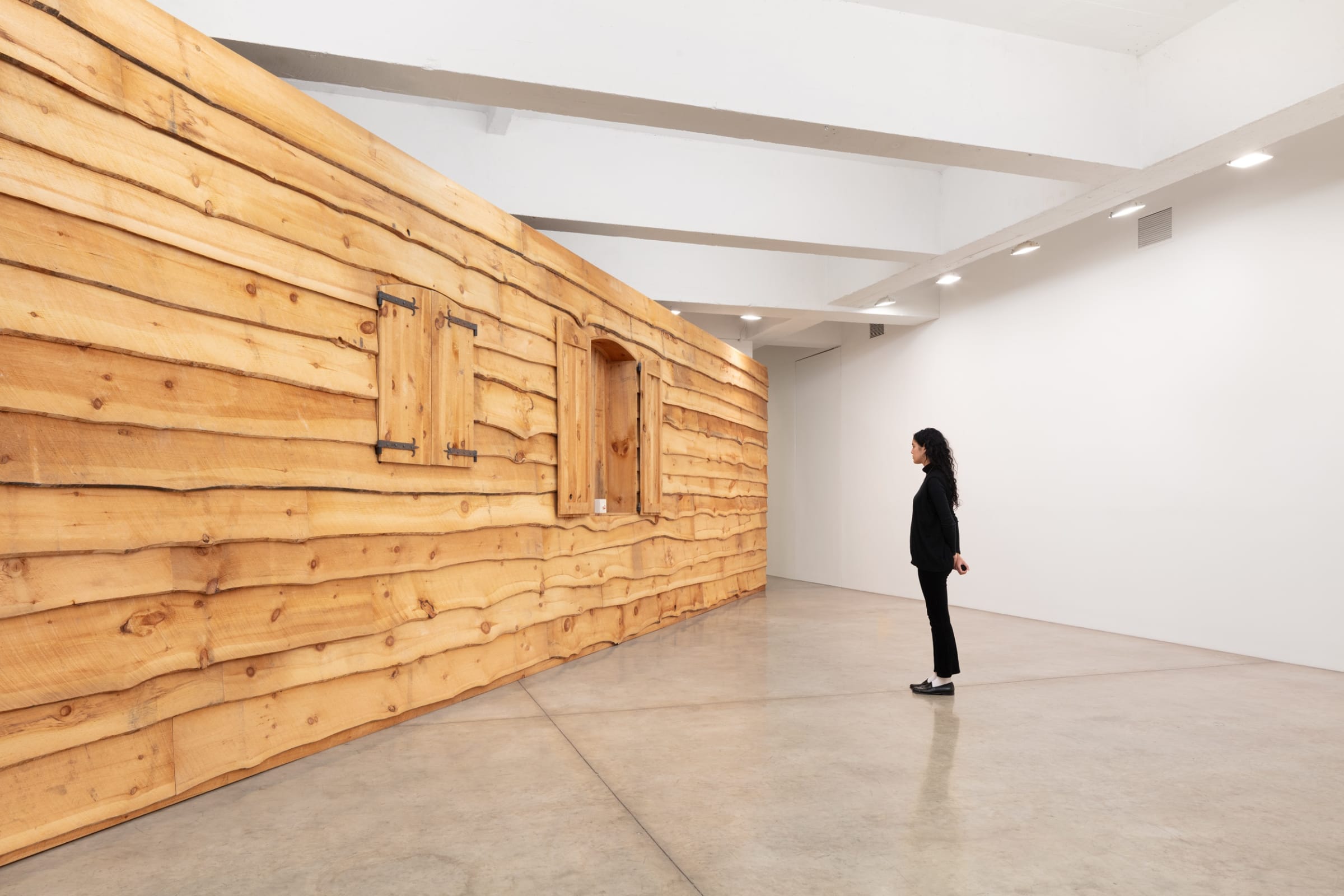 For more than four decades, Haim Steinbach has explored the psychological, aesthetic, and cultural aspects of collecting and arranging found objects. In selecting items that range from the obscure to the ordinary, the private to the ethnographic, Steinbach emphasizes notions of circulation and human connection. The exhibition highlights a concentrated three-year period in the artist’s career and draws upon memory, offering a recontextualization of his own historic practice and an occasion for reflection. Comprising a seminal large-scale “display” and objects from the same time period, the exhibition is populated by individuals who are both named and unnamed, touching upon family gatherings and traditions, intimacy, and the personifying power objects can hold.

At the center of the exhibition is Display #28 (rustic wall with music box and candle snuffer) (1991), an architectural façade that spans nearly the entire diagonal axis of the gallery’s main space. The concept of “display” recurs throughout Steinbach’s practice as a form that foregrounds objects, drawing awareness to the means of presentation and its implications. First shown at Jay Gorney Modern Art in New York, Display #28 was inspired by a farmhouse in Tuscany where Steinbach stayed in the summer of 1991 and prominently features two found objects from the original site: a “Blabbermouth” AM/FM radio and a candle snuffer; the former a 1980s relic that comically mimes words or music through a motorized mouth, and the latter a retired eighteenth-century tool. Updated for 2021, the Blabbermouth plays a mix of fragments from musical instrumentation and voices. The Blabbermouth was discovered by Steinbach on a window ledge of the farmhouse, appearing as if it were a “mouthpiece” for the house itself. As objects culled from the world, the Blabbermouth and the candle snuffer reference the hands through which they have passed, while the vernacular wooden siding alludes to rural American construction and agriculture.

In the adjacent gallery, Untitled (table with towels, bone, pacifier) (1993) a broad glass, wood and MDF table presents a selection of folded cotton towels collected from an array of hotels in Austria. Embroidered and embossed with their owners’ company insignia, the towels are closely tied to both known places and unknown bodies. Originally shown in the exhibition “Das Fremde/Der Gast” (The Foreigner/The Guest) at Offenes Kulturhaus in Linz, Austria, the work features two compartments on opposing sides of the table: a rawhide bone is tucked into one, while an infant’s pacifier rests in the other.

In the front gallery, Shelf with Nurse (1983) acts as a prelude to the exhibition as well as a tacit acknowledgment of the current moment in which we find ourselves. The work comprises a hand-painted wooden figurine, perched upon a shelf assembled from tiered vertical planes of painted wood. A rare early example of a form that has become central to Steinbach’s practice – the wall-mounted shelf with an arrangement of selected found objects – the piece underscores Steinbach’s interest in architecture and built environments while also alluding to health and the medical-industrial complex.