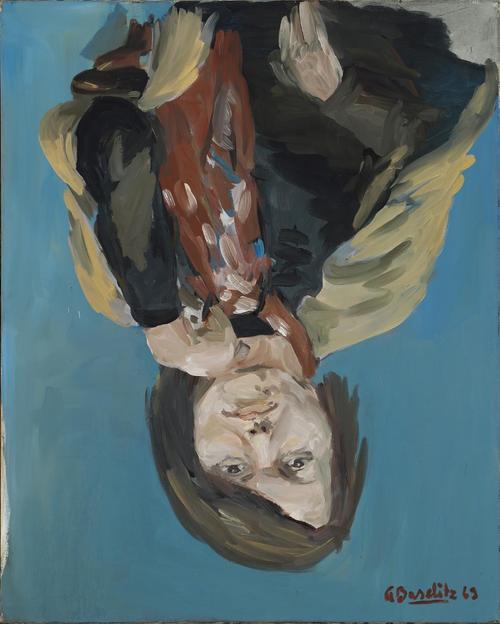 German artist Georg Baselitz and his wife, Elke, have gifted six landmark paintings by the artist to The Metropolitan Museum of Art in honor of its 150th anniversary in 2020. The portraits, made in 1969, are among the first that Baselitz created using the radical strategy of inversion, in which the pictorial motif is literally turned upside down, enabling the artist to focus on painting’s possibilities, rather than the image of the sitter in direct relationship to the viewer. The compositional and conceptual conceit of upending the figures fundamentally destabilizes the viewer’s perspective, thereby thwarting our ability to firmly identify elements like narrative, content type, and artistic tradition, thus setting Baselitz’s works in a category of their own. The six paintings will remain on view in Georg Baselitz: Pivotal Turn in The Met’s Robert Lehman Wing through July 18, 2021.

“The Met is tremendously grateful to Georg and Elke Baselitz for this very meaningful and significant gift,” commented Max Hollein, Marina Kellen French Director of the Museum. “This formative group of early portraits by one of the greatest painters of our time is an important addition to The Met’s outstanding collection. In documenting a close group of friends and family, these works manifest a very personal moment, as well as a decisive turn in Baselitz’s career. We are thrilled to welcome such exceptional works to The Met!”

“Elke and I hold a special place in our hearts for The Met and New York,” noted Baselitz. “With the donation, Elke and I also want to express our very special connection to the USA. The country has always been a symbol of freedom for us. It brings tremendous joy and satisfaction knowing that these six works that have remained in our collection and that mark a significant moment in the evolution of my approach to painting will be an integral part of the Museum’s historic collection.”

“Baselitz’s unorthodox strategy of inversion allowed him to set his work beyond the socialist realism of his origins in East Germany but yet in a complicated relationship with the art of capitalist West Germany. Given the flourishing in recent years of figuration, these paintings by Baselitz will hold deep currency for younger generations of artists who, like Baselitz, continue to value America as a symbol of democracy,” added Sheena Wagstaff, Leonard A. Lauder Chairman, Modern and Contemporary Art at The Met.

Georg Baselitz was born Hans-Georg Kern in 1938 in East Germany, where he began his art studies in 1956 at the Academy of Fine and Applied Art in East Berlin. In 1957, the artist fled for the West, where he changed his surname to Baselitz and entered the Academy of Fine Arts in West Berlin and completed postgraduate studies in 1962. Having grown up in the wake of the devastation of World War II, he was drawn to reckon with that traumatic history in his early paintings, in works from the Heroes and Fracture series, in which bodies appear distorted, morphed, and broken. After a decade of this practice, in 1969, Baselitz reached a critical point in his career as he sought to expunge narrative content and expression from his works in order to focus on painting itself, and he began representing subjects upside down. The approach allowed him to embrace traditional genres that he had previously avoided, including portraiture, nudes, and landscapes, and the approach continues to be of interest to him.

These portraits of the artist’s friends and associates in the German art world—the journalist Martin G. Buttig, the gallerists Franz Dahlem and Michael Werner, and the collector Karl Rinn—are deeply personal and have remained in the artist’s collection for six decades. The standardized format and similar color palette underscore the artifice of pictorial convention, while the thick brushstrokes and cheap pigments foreground the painterly process. The group, which also includes the first-ever painting of his wife, Elke, provides a rare opportunity to study a pivotal moment of artistic innovation.