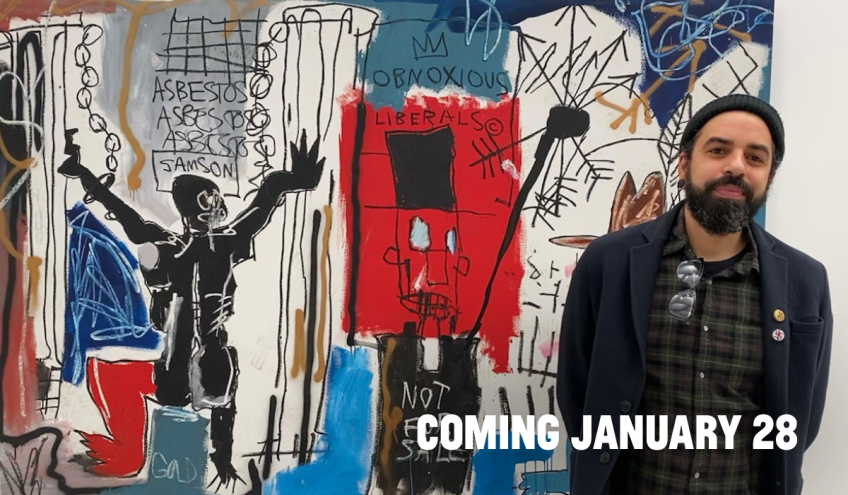 The No Wave segment, hosted by James Spooner, co-founder of Afro-Punk and who ran an underground club on Canal Street in the early ‘90’s, features tunes by James Chance and The Contortions, Teenage Jesus and the Jerks, Basquiat’s band Gray, Liquid Liquid, DNA, and Mars.

Launching on January 21, across The Broad’s digital platforms, the first video segment of the series, Jazz and Bebop, was produced, co-directed and written by Alyssa Lein Smith of Quincy Jones Productions and features LA jazz musician Terrace Martin, as well as input from Quincy Jones himself. Martin delves into how the bebop genre, birthed in New York City much like Basquiat, played a role in his artistic vision.

Founding Director Joanne Heyler said, “The Broad’s new series, Time Decorated, offers nuanced insights from commentators whose expertise and knowledge in jazz and bebop, hip- hop, and afro-punk illuminate music’s bedrock role in Basquiat’s life and art. The series explores the wealth of music references in his paintings, and the themes of justice and resistance inseparable from those references. As the museum with the deepest representation of Basquiat’s work in the United States, The Broad strives to present programming to bring to our audience a clear understanding of his achievements.”

Quincy Jones said, “We’ve got to know where we come from in order to get where we want to go, and institutions like The Broad are essential to helping us achieve that goal.” He added, “The museum building may be temporarily closed, but informative exploration never is, and that’s exactly what the Time Decorated series is all about. It’s always an honor to work with my brother Terrace Martin and The Broad!”

The series includes works by bebop artists such as Charlie Parker, Dizzy Gillespie, Thelonious Monk, and Max Roach. Music for this segment includes Ornithology by Parker, Hot House by Parker and Gillespie, Ol Man Rebop by Gillespie, and music from Martin’s Dinner Party.

On January 28, The Broad will launch Punk and No Wave, hosted by James Spooner, co- founder of the Afropunk Festival and who ran an underground club on Canal Street in the early ‘90’s. The segment features tunes by James Chance and The Contortions, Teenage Jesus and the Jerks, Basquiat’s band Gray, Liquid Liquid, DNA, and Mars. Following Punk and No Wave comes Bebop to Hip-Hop Via Basquiat, featuring Professor Todd Boyd of USC. He will speak about the through lines from bebop to early hip-hop via use of particular iconography in Basquiat’s paintings and showcase musical pillars such as Public Enemy, Rammellzee, and Grandmaster Flash and the Furious Five.

James Spooner directed the films White Lies, Black Sheep and the seminal documentary AFRO-PUNK. Both films premiered at national and international film festivals, including Toronto International and The American Black Film Festival, and garnered various awards. James is also the co-founder of the Afropunk Festival, which currently boasts audiences in the hundreds of thousands around the world.

Spooner’s work has been recounted in various publications, including NPR, Vice Magazine, The Village Voice, The New Yorker, Vibe, Fader Magazine, MTV, NBC News, and Variety, and he was a recipient of the ReNew Media Rockefeller Grant. He has been a guest curator for The Broad in Los Angeles and previously programmed for the Brooklyn Academy of Music.