Milo Reice: ‘The Caesar Paintings & Other Works’
The Delights of Macronic Art 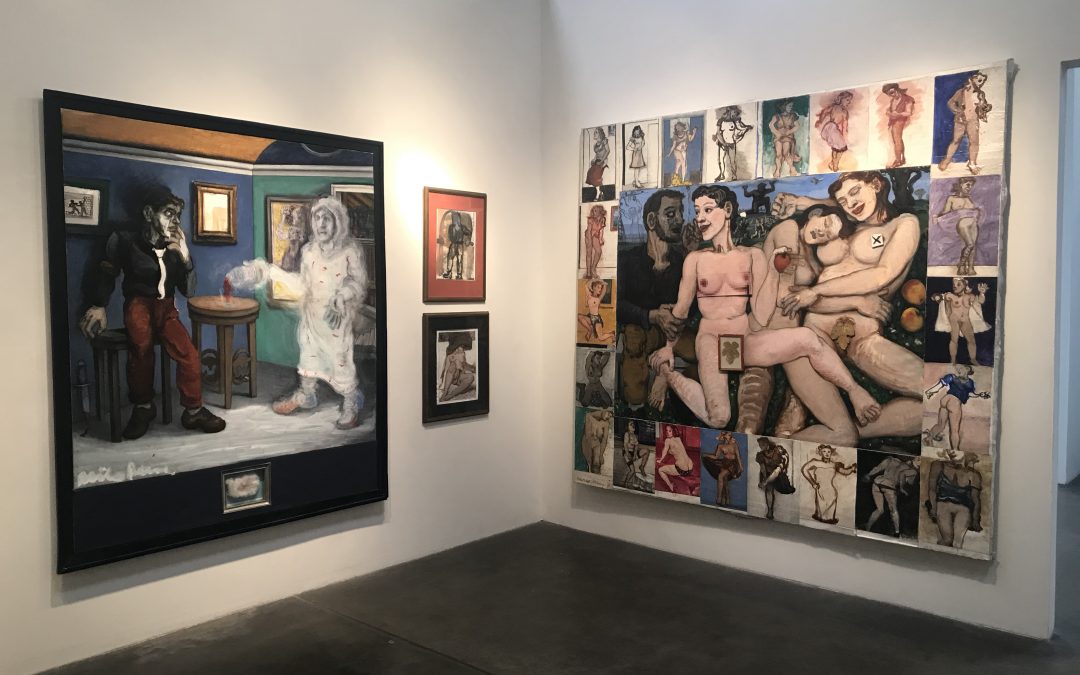 The Caesar Paintings & Other Works

“Et tu, Brute? Then fall Caesar!” Such were the famed last words of Julius Caesar in Shakespeare’s telling. As early as the Renaissance, reanimating the story of Caesar’s untimely demise was an exercise in eclecticism, requiring the juxtaposition of formal Latin and English vernacular, antiquity and contemporaneity. Milo Reice’s series of mixed media paintings at the Craig Krull Gallery, is also a pastiche, as if taking a cue from the absurdism of Shakespeare’s macaronic Latin line. His paintings make wide-ranging historical references to Caesar’s reign, Abraham Lincoln’s presidency, and the Coronavirus pandemic. Their artistic style quotes comic books, classical sculptures and postmodern collages. 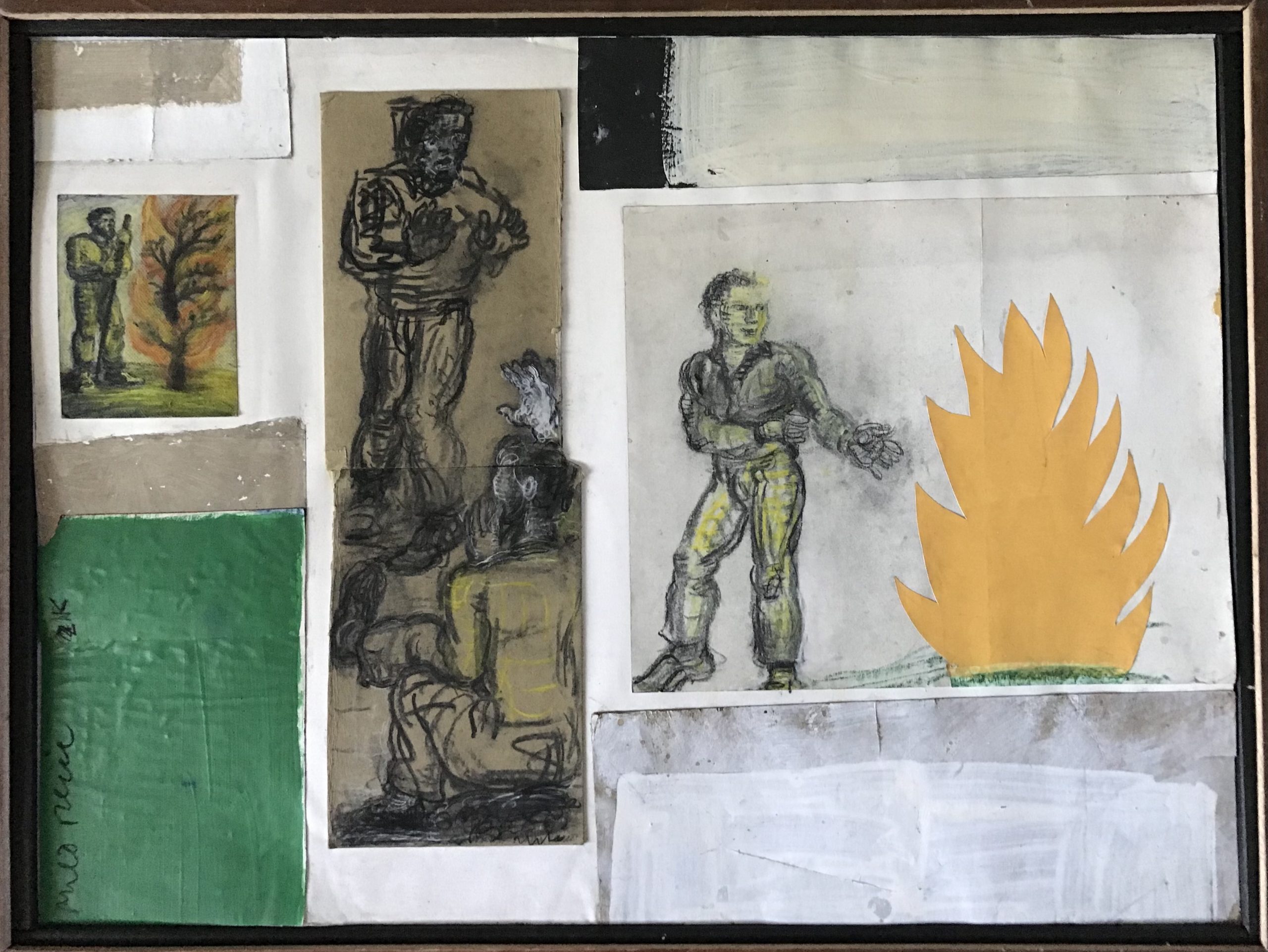 But there is a marked difference between Shakespeare and Reice’s Caesars. Shakespeare’s title character succumbed while performing Latinate authenticity and emotionality in front of an English audience. Reice’s Caesar, on the other hand, does not beg to be mistaken for the real, historical figure who perished almost two millennia ago. Caesar, in Reice’s rendition, becomes a caricature. 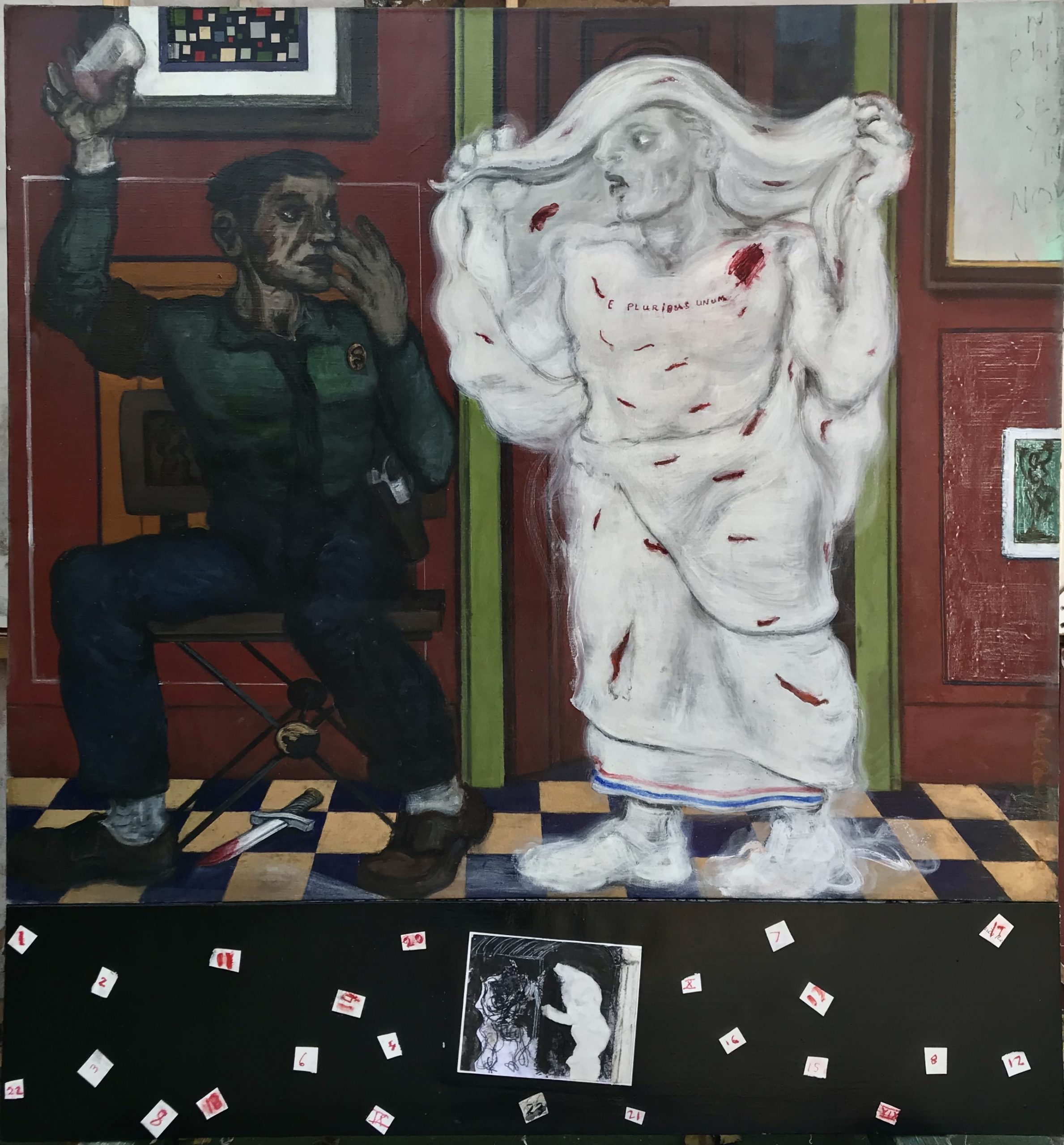 I Will see You in November (Brutus and Caesar’s Ghost)

In one painting, Leaving Alexandra with Love (2020), Cleopatra, donning a decidedly frumpy outfit, sidles up awkwardly next to Caesar, whose substantial hand cooly points at her cheek. They appear as a middle-aged couple who has long abandoned romanticism in favor of the pragmatism of running a household as an economic enterprise. “Cleopatra you are now a queen,” Caesar disaffectedly says in a speech bubble. “And I will be a great one my dear Caesar,” Cleopatra replies factually. The lack of punctuation in their dialogue befits the mood that their body language exudes. A plane conspicuously flies in the background over the silhouette of a city. 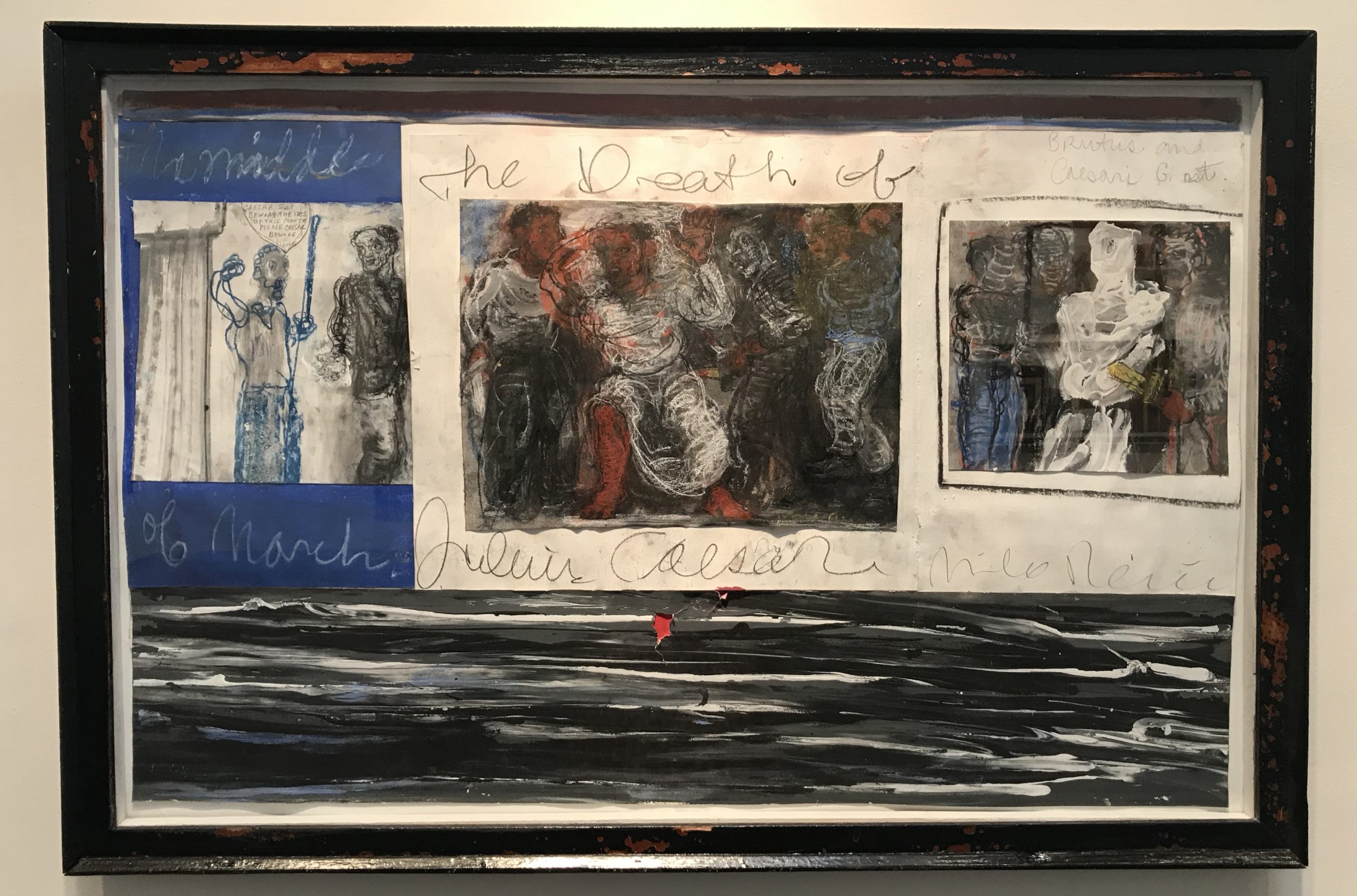 The Ides of March (an original conception)

The painting depicting the notorious scene of Caesar’s death is entitled The Assassination of the American Soul (or the gutting of Caesar by the coward Brutus and his coterie). Caesar—his stabbed-back facing viewers, his face upturned in perplexity toward the mass of senators who have done him in, his legs and feet twisted abnormally under pressure—is physically contorted in an unlikely position. His pose underlines the dramatized nature of his representation. His killers, who surround him wearing grayscale faces and brandishing macabre bloody knives, are lifeless ghouls. 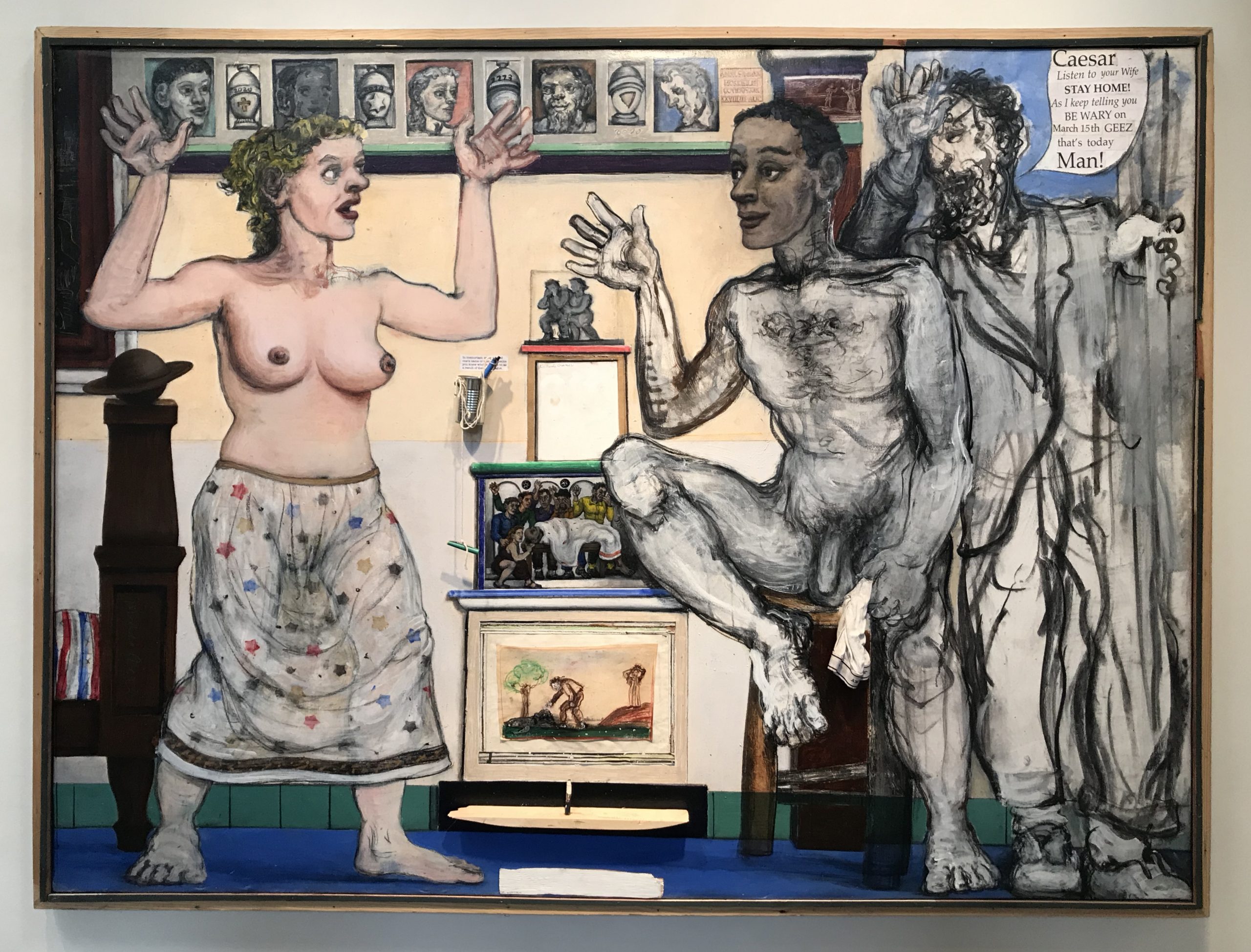 Breakfast Time on the Fifteenth (The Ides of March)

The backdrop to the whole scene is composed of hastily arranged photos and sketches, including black-and-white presidential portraits of Barack Obama and Abraham Lincoln. Reice’s provocative title suggests that the mythologized events of Caesar’s death are interchangeable with the moral corruption pervading the highest level of politics in America today. In his painting, a heartless and fundamentally vacuous group of conspirators presides over the undoing of imperial greatness. Is the “American soul” victim to the same fate, Reice asks? The rest of Reice’s Caesar paintings, which portray the supposed hero as a bumbling fool, casts doubt whether or not there was ever any soul in the Roman Empire. If Caesar is hollow, Brutus is not a protagonist either in Reice’s series (in marked contrast to Shakespeare’s play), but simply another man in the crowd, distinguished only by his magnitude of decrepitude. 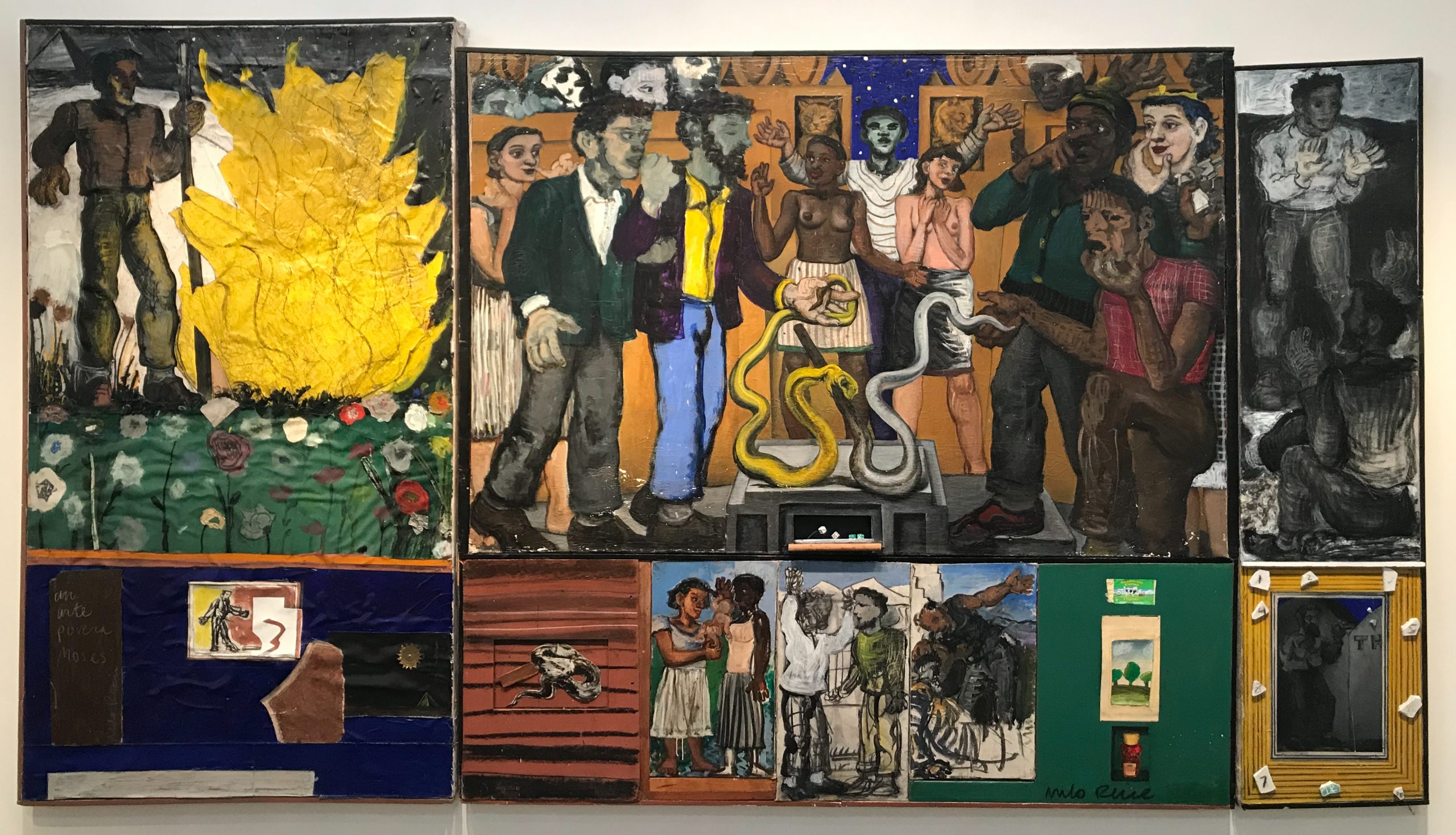 If Caesar and Brutus are effigies for our contemporary political leaders, are Reice’s paintings a partial remedy for the situation we find ourselves in? Can treating history as farce be a comfort, however cold, in hard times? In the only aspect of his artwork that felt sincere, a can with two pens jutted out from a painting beneath a typed note that read, “In memoriam: enter a loved one’s name or that of someone you knew who’ve passed on as a result of the COVID plague.” Only one name, inscribed in neat cursive, was visible when this viewer visited, leading one to suspect that the scenes portrayed were too cynical and too depraved for earnest grief.

Jasmine Liu recently graduated from Stanford University, where she studied anthropology and mathematics, and wrote and edited for the Stanford Daily. She enjoys writing art and literary criticism.