Jeffrey Gibson: It Can Be Said of Them at Roberts Projects 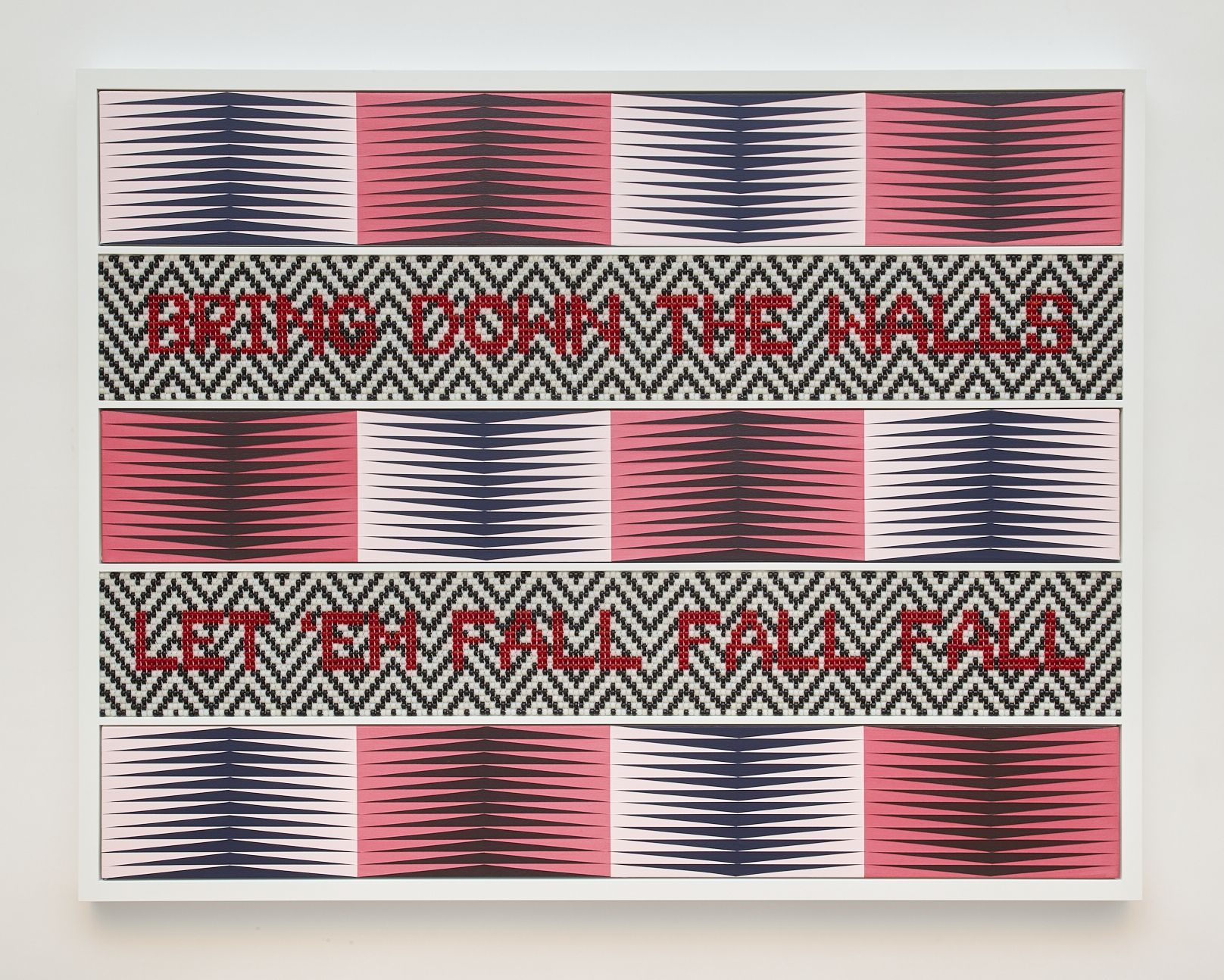 It Can Be Said of Them takes its title from a print produced by Sister Corita Kent in 1969. Kent’s print was part of her “Heroes and Sheroes” series, undertaken after she formally left the church as a serving nun, and depicts images of Jesus, Martin Luther King, Jr., John F. Kennedy and his brother Robert Kennedy. The men are surrounded by a quote by author E.B. White that reads, “It can be said of him, as of few men in like position, that he did not fear the weather and did not turn his sails, but instead, challenged the wind itself to improve its direction and to cause it to blow more softly and more kindly over the world and its people.” A strong supporter of the Civil Rights Movement, Kent viewed these four figures, among many others, as modern day martyrs, especially during a time of aggressive political and social unrest.

Gibson was inspired not only by Kent’s radical activism during this historical period, but by her choice to change the more commonly used pronoun “him” to a more inclusive “them”. The singular “them/they” can be indicative of one’s choice to self-identify as non-binary or gender-fluid, as well as signifying the linguistic expansion of how gender and its influence on both diversity and inclusivity have evolved.

Gibson recognizes how the fight towards total gender equality remains inextricable from the struggle to attain universal civil rights, and continues to be advanced by the sustained, common efforts of many. In recontextualizing the words of activists and artists alike who have fought for, campaigned and promoted human rights, he highlights and unifies separate voices and experiences advocating for parallel goals.

All the works on view feature the bold geometric patterning, hand-stitching and intricate beading details defining Gibson’s recognizable aesthetic, echoing the rhythmic flow and verses of the displayed language. Gibson’s punching bags transcend their original form and purpose to become phenomenal visual experience. Fully beaded with the slogan of a popular chant, CAN THEY SHE HE DO IT? YES WE CAN! reflects on the loud and joyful inclusion of all by speaking to the they(s), the she(s) and the he(s), in that order. Collectively each become the “we!” of the rallying cry.

Accompanying beaded wall works and figures continue to further develop Gibson’s hybrid influences, pairing Modernist forms and techniques with his narrative deconstructions of language’s intrinsic properties. Text pulled from songs by Tracy Chapman, Björk, and Terry Callier, among others, highlight charged cultural messages still relevant today. In Gibson’s hands, the oratory power of music is a tool to understand an ever-shifting present and the dynamic presence of history.

SHE WAS A BEAUTIFUL BOY uses excerpted lyrics from British electronic group Underworld’s hit song “Born Slippy”. The use of pronouns changes throughout the song’s duration, capturing the literal and, at times, metaphorical shift of (re)constructed and (re-)affirmed identity. In direct contrast, I COULD BE SOMEONE, inspired by Tracy Chapman’s 1988 song “Fast Car”, consistently uses the pronoun “I.” Yet the intimacy and immediacy of Chapman’s first-person narrative expands the song to embody all-comprehensive themes of survival and control, elevating what could be a more narrow subject to a broader universal singularity. YOU’LL BE GIVEN LOVE also touches on this concept of the infinite, where all are parts of a greater whole, and applies it to the innermost dynamics of love inherent to all human bonds.

It is in these works and others on view, that Gibson expands on how gender, as identity, is a liminal space; one that occupies and explores the in-between, the threshold, the reconfigured and the temporal. As a transitory space or state, it is characterized by ambiguity, hybridity and fluidity, with the great potential for subversion and radical transformation. Writing about anti-structure, cultural anthropologist Victor Turner argues that this liminal state is “a conceptual space where the ordinary world falls away, and the hierarchies of everyday life are no longer applicable.” It is in this sublimination of surrender where joy can be found; where one re-articulates a new identity beyond the restricted spheres tied to tradition, geography, or social construct, and lives openly after abandoning the constraints of the everyday. Gibson’s most recent work is a reaffirmation of this profound and total freedom.