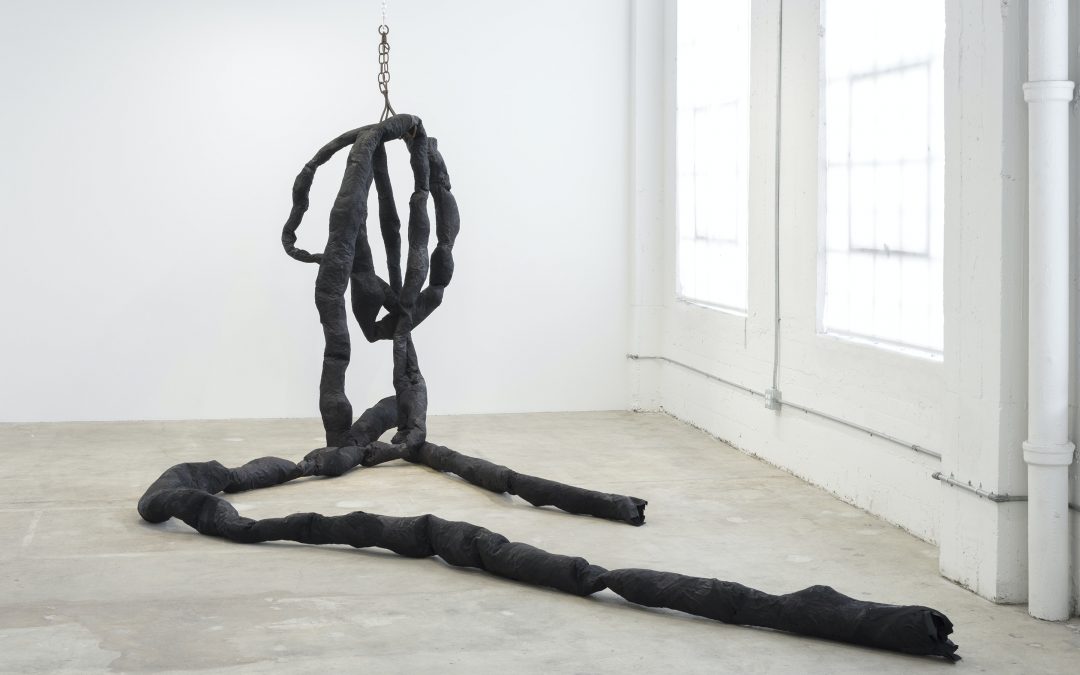 Unrecognizable body parts populate the surfaces of Rodney McMillian’s latest show at Vielmetter Los Angeles, casting dispersions into the depths of his textured, abstract works. Entering the converted tire warehouse, an intense wave of boundedness washes over the viewer’s body––each work’s expansive promise flattens against demarcated edges. Amid the patent white walls, clusters of works emerge, seeming to form colonies in each corner of the open space. The muted color scheme, characterized by blacks and whites, is barely able to be contained by the frame of each canvas and emits a rainbow of erasures. Each painting is layered with literal and artistic descriptions of the racist and systematic medical exploitation of Black bodies throughout America’s history. 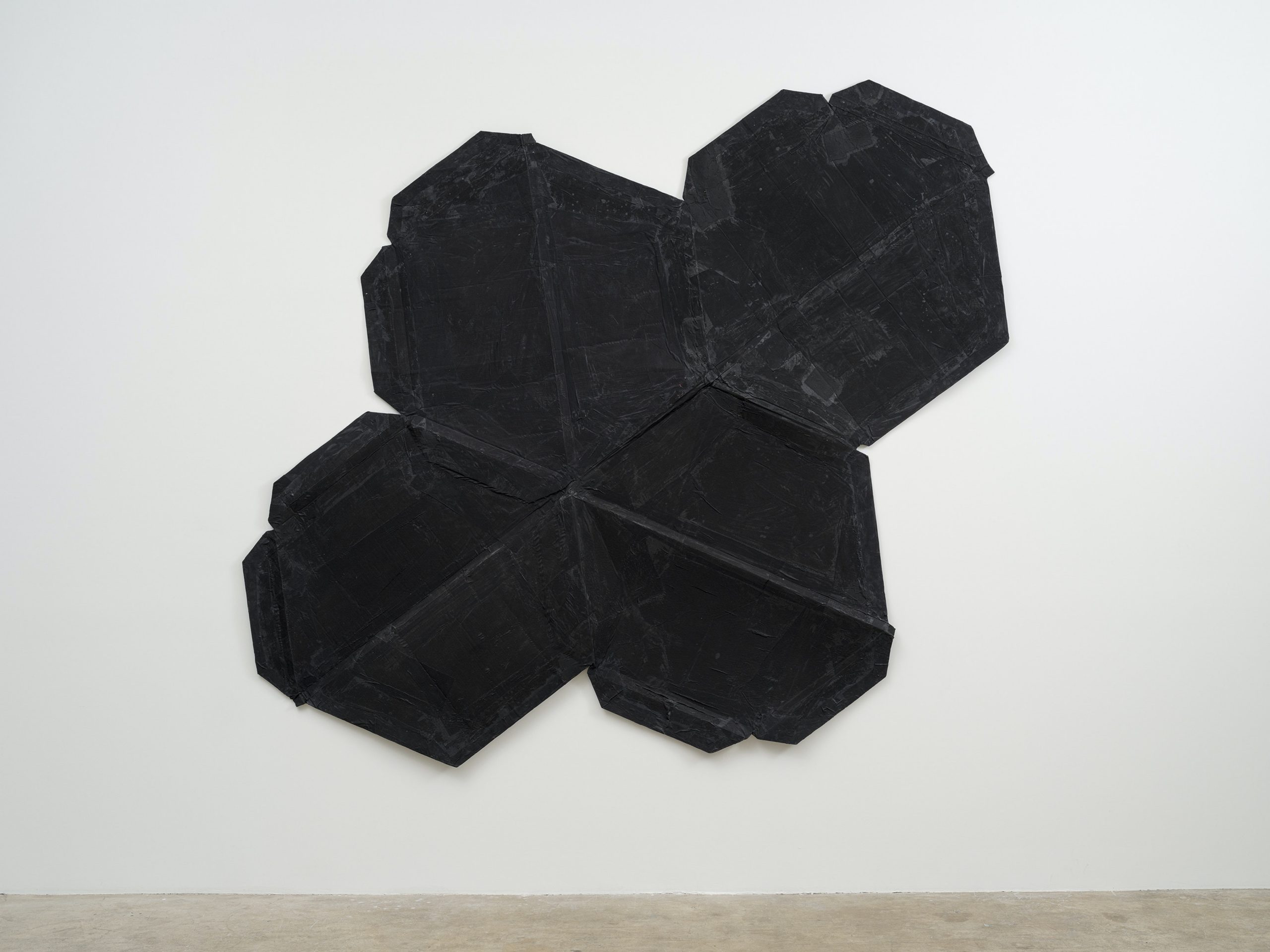 Inspired by Dorothy Roberts’ Medical Apartheid (2007), McMillian’s work delves into the lurid and well-documented human rights abuses committed in the name of progressive science. Dovetailing with the American eugenics movement, these reductive appraisals refuse to value Black flesh, turning citizens into test subjects. In Mississippi Appendectomy (2020), thick swirls of black, green and yellow acrylic explode over the irregular surface of the canvas. Simultaneously recalling the raw emotion of Mel Edwards’ Lynch Fragments and Willem de Kooning’s action paintings, the work is mottled with suggestions of torn, disused flesh and a purple festering wound. Roberts’ description of the forced sterilization of Black women “without [their] knowledge or consent” is superimposed on a flattened background. 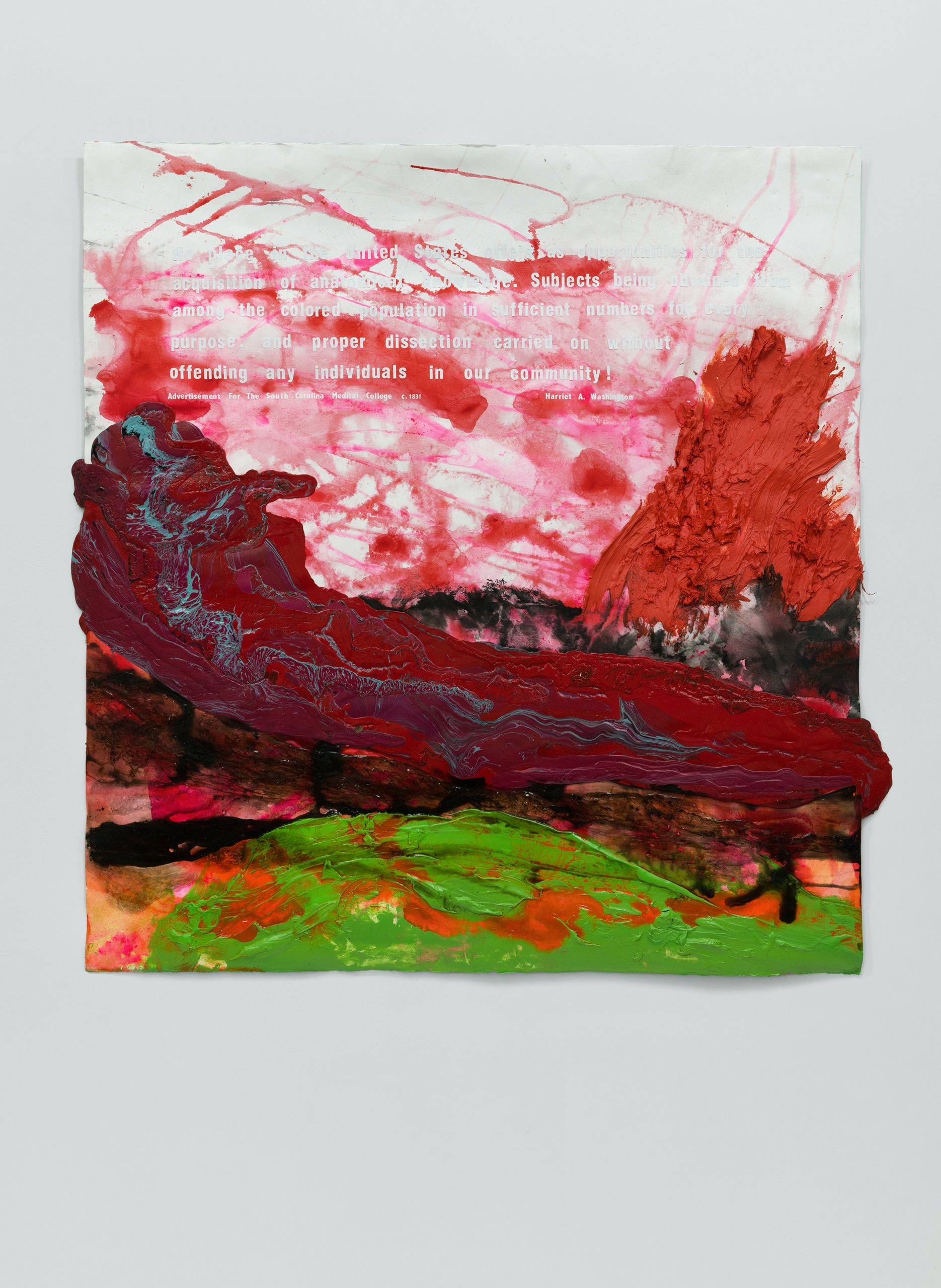 Each canvas doubly portrays the angst of a historical agent, struggling to come to terms with a starkly racist and underexplored past. a belly (2020), composed of fabric and chicken wire, resembles a darkened and distended cast, covering an injured torso. Jagged edges graft the three-dimensional embryo together, framed in the middle of an off-white canvas and captioned with Linda Blount: “Race is not a risk factor. It is the lived experience of being a black woman in this society that is the risk factor.” McMillian’s simple quotes complement the chaotic energy of the visual sensorium, laying bare trauma that could not be forever concealed. 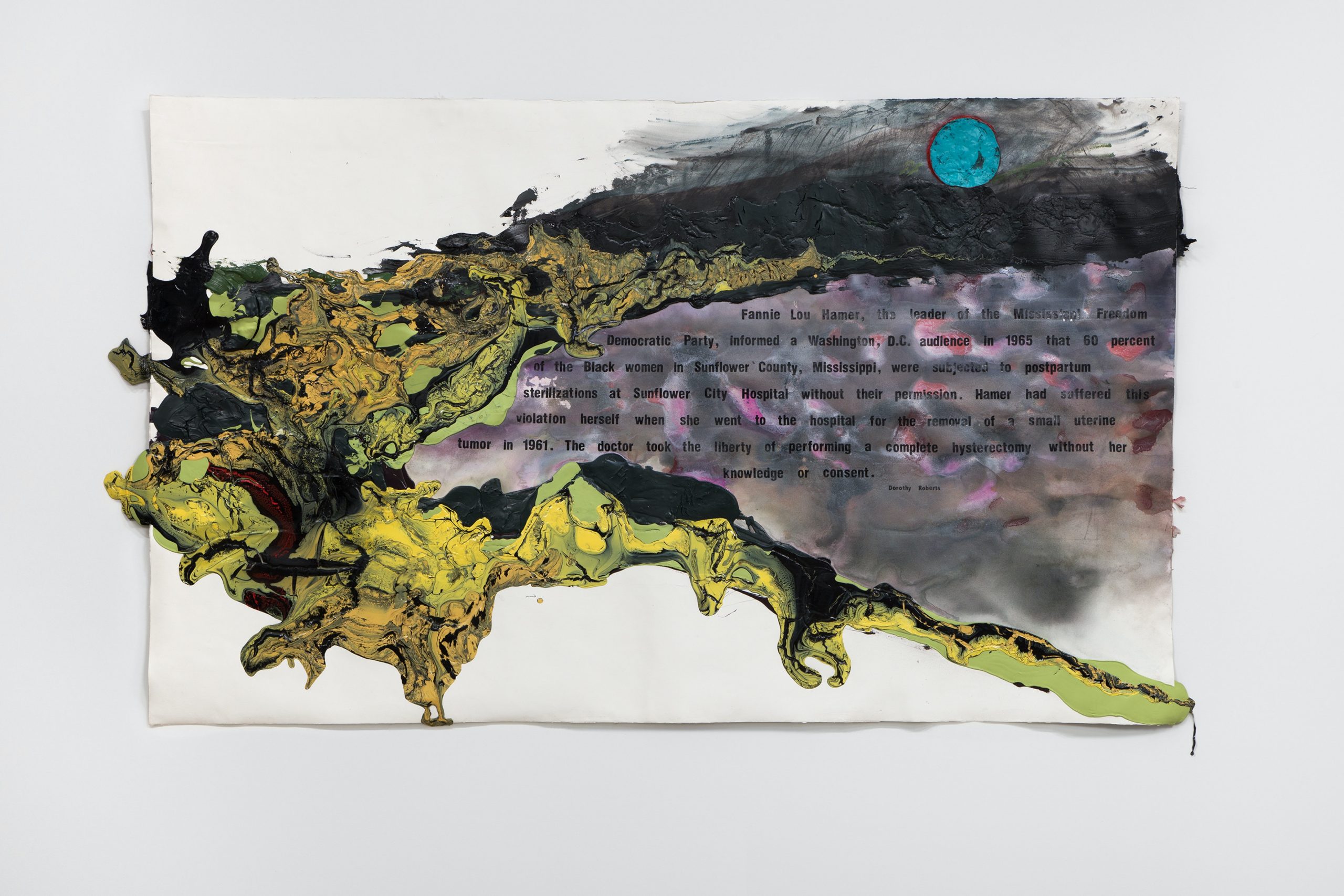 McMillian’s works feel grounded––historically, physically, ideologically––in an arresting and visceral manner, beyond the white cube of Vielmetter. His small paintings are complemented by human-sized cells, constructed from cardboard, fabric and acrylic. These modular, darkened masses are suspended from the walls, implicating viewers in their murky, iconic depths. Motionless, yet organic, these forms serve as manifestations of the lost “accursed share” suggested by McMillian’s constellation of quotations. Juxtaposed with the paintings’ brutal abstraction and panoply of voices, these cardboard assemblages function as doors opening onto  a distorted body.

More explicitly visceral works feature enfolded entrails and hearts. Perfectly designed to fit into the gallery’s cubbyhole, untitled (entrails) is weightlessly suspended from the ceiling by industrial meat hooks. Transforming hollow, chicken wire cylinders into the engorged intestines of a giant, McMillian presents the gallery itself as a de facto body. The artist makes use of vinyl and thread in White House II, mimetically depicting the imposing neoclassical architecture of the real-life White House, his 40-foot version crushed, flat and impotent. The thin ionic columns belie an utterly pernicious weakness, smashed together into the same artistic place. Displaying a veritable gradient of whites and blacks, this work presents itself as the paper tiger, quietly orchestrating the violence displayed throughout the gallery. McMillian’s art is an arresting, historical world that’s at a smooth, grounded and ideal remove from our own––ultimately breaking through its own palimpsest to suggest the enduring necessity of memory.