Brendan Lott: ‘Safer at Home’
A Time of Suspended Animation 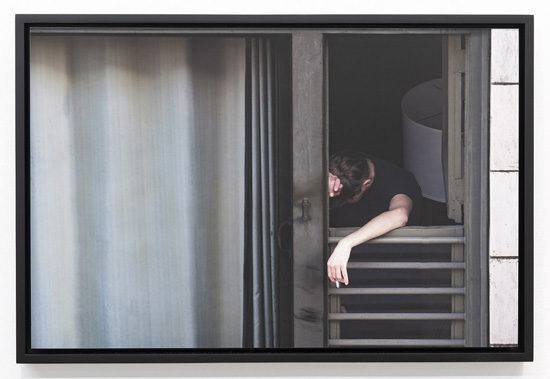 When the COVID-19 pandemic first encroached upon Los Angeles, many Angelenos hunkered down in their homes and apartments obeying the stay at home directive. From his downtown loft, Brendan Lott began to pay attention to the goings on in the apartments he could see from his window. Entitled Safer at Home, the resulting series of photographs is “street photography when no one is in the streets” according to Lott. He goes on to say, “This is Robert Frank’s The Americans when America is stuck at home… This is Walker Evans’ subway portraits when no one has anywhere to go.” The series also calls to mind Alfred Hitchcock‘s Rear Window, the voyeuristic work of Sophie Calle as well as Merry Alpern‘s Dirty Windows photographs (1995). 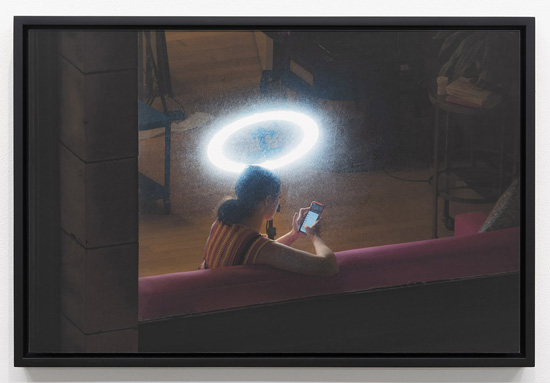 Lott’s voyeuristic images carefully frame private and intimate moments against the geometry of the high-rise architecture, simultaneously capturing interiors and fragmenting people. Because Lott observes his subjects unbeknown to them from afar with a telephoto lens, he can wait patiently until the action (or non-action) aligns with his compositional sensibilities— people divided by window panes, their faces obscured by the architecture. What is striking about the images is how often they depict the mundane aspects of everyday life— individuals performing banal tasks like lighting a cigarette, making a bed, sweeping, watering a plant and often staring at their mobile phones. 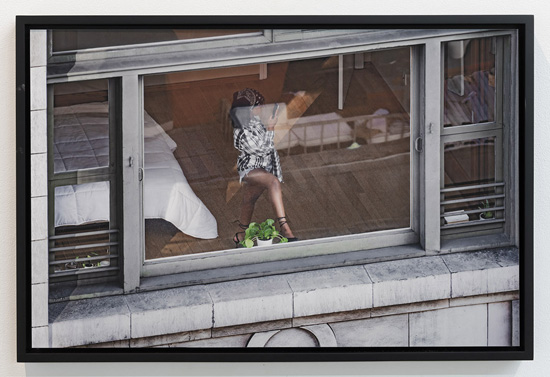 In isolation, the screen has become a best friend. It is always there and can be called upon for companionship. It is curious that in Lott’s pictures more people regard their screens than actually talk on the phone as in July 23, 2020, 9:43 pm where Lott presents a woman seated on her pink couch, gazing at her cell phone screen illuminated by a bright circular light that forms a wide halo around her head. In July 23, 2020, 7:35 am Lott looks down from above into a bedroom. Here, the composition is divided in thirds. A white comforter and mattress fill the bottom left, a bit of wood floor is shown at the top, and the arms and torso of a woman amid white sheets staring at her phone. The details of the window frames— be it horizontal bars, pea-green molding or traces of atmospheric dirt— call attention to the inside/outside dichotomy. Lott’s photographs accentuate the fact that he is shooting windows. While he is looking into private lives from afar, he is as interested in how the images are framed by the existing architecture and how the surfaces are reflective and sometimes spotted with handprints (inside) or debris (outside) — as he is in the personal environments within. 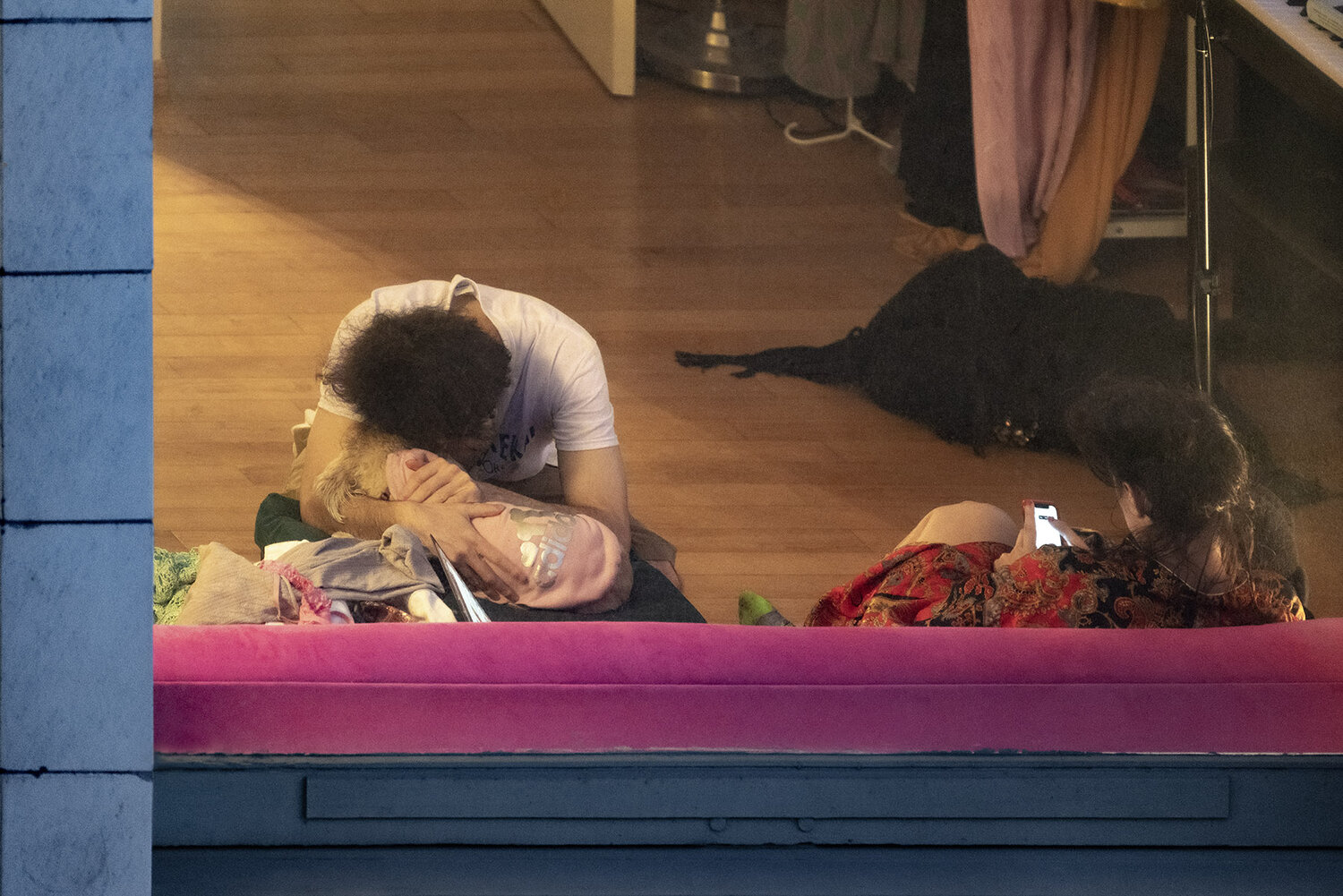 July 21, 2020, 5:15 pm represents an instance of melancholy. Within the image, Lott captures a man bending over, resting his head on one arm which is positioned against the window frame. The other arm extends out the window holding a lit cigarette. The curtains are drawn obscuring a view of the interior. While it is not possible to see the man’s face, the implied narrative suggests a moment of despair. In May 16, 2020, 5:52 am, Lott intrudes on a moment of slumber. Here, in the early morning light he photographs the feet and hand of a woman extending out from a white comforter. Because the telephoto lens flattens space, the windows become a series of rectangles that frame different aspects of the room and sleeping figure. 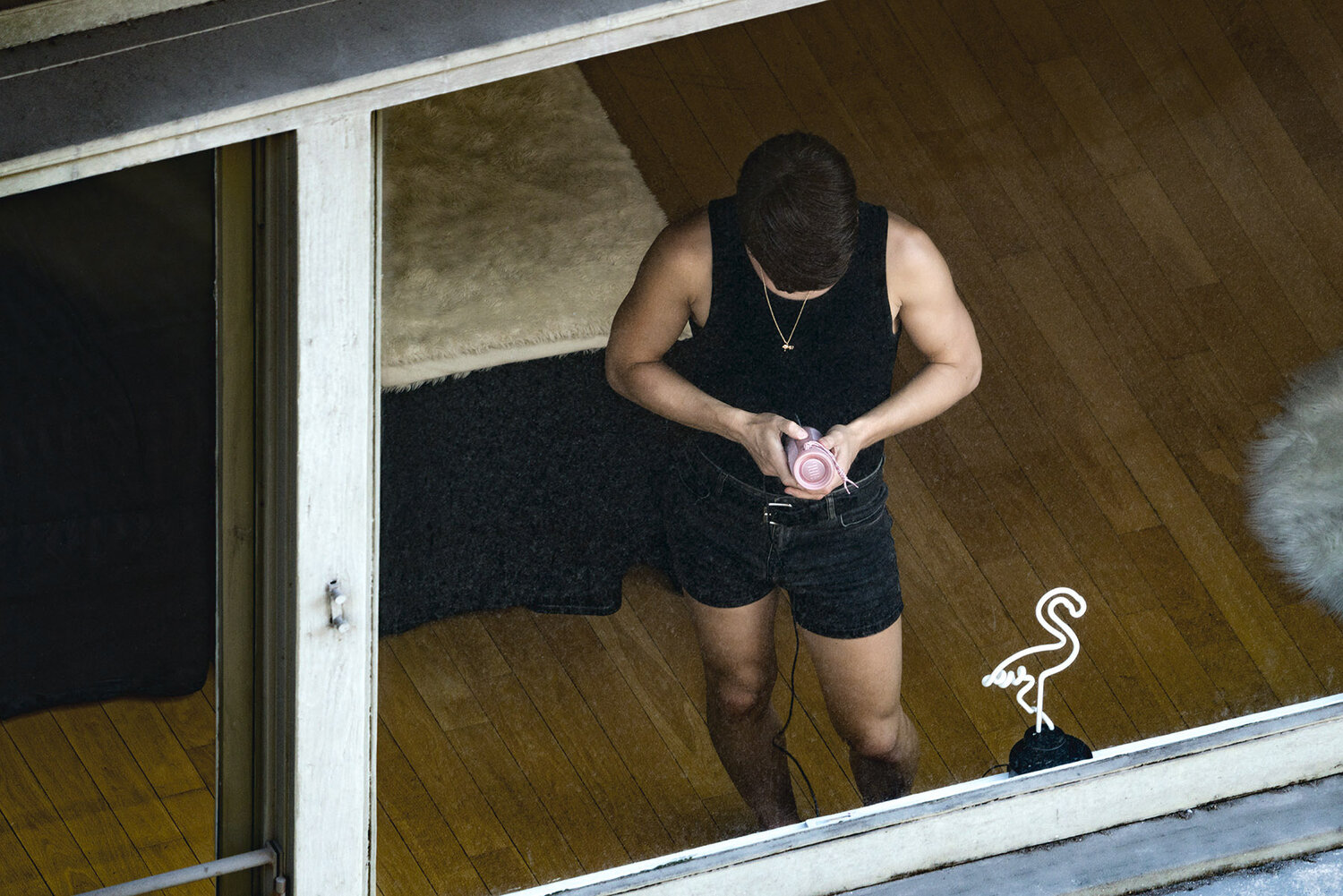 Though Lott is indeed a voyeur, his purpose in making these photographs is not to expose risqué behavior, but rather to illustrate the monotony of quarantine. His pictures reflect daily life filled with personal rituals, moments of reflection and isolation, the comfort pets provide, as well as the dependency on mobile devices. Within his beautifully framed images narratives develop. Though they maybe be fictions, we infer a growing frustration, longing and desire as the dates of the photographs move from April to September, reflecting the seemingly endless duration of the pandemic. Lott’s images are indicative of the now— a time of suspended animation.