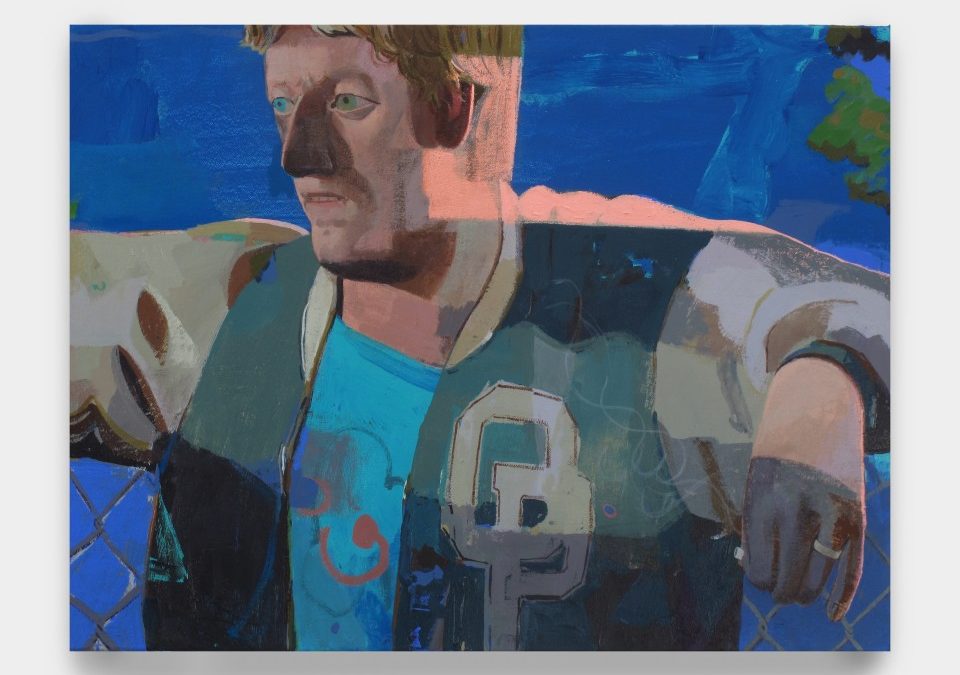 Neatly tucked into the front gallery at M + B, Matt Bollinger’s Labor Day, his first solo exhibition at the gallery, confronts viewers with a scattered panoply of shapes. Each work, painted specifically for the show, seems to spring to an idealized life, replete with muted color schemes and rhyming characters––many who resurface in Bollinger’s hand-drawn animations. The shopkeeper in Eric at Quietside seems to emerge as a pendant of the central lawn care technician in Davis Lawn Repair, each sharing a psychological and geographical space. In Bollinger’s temporal mind, objects take on a humanoid presence as organic bodies recede into figural abstraction. One imagines that Eric’s lanky form has more in common with the stylized (and overpriced) bottles of liquor resting on the shelf behind him than with the viewer. 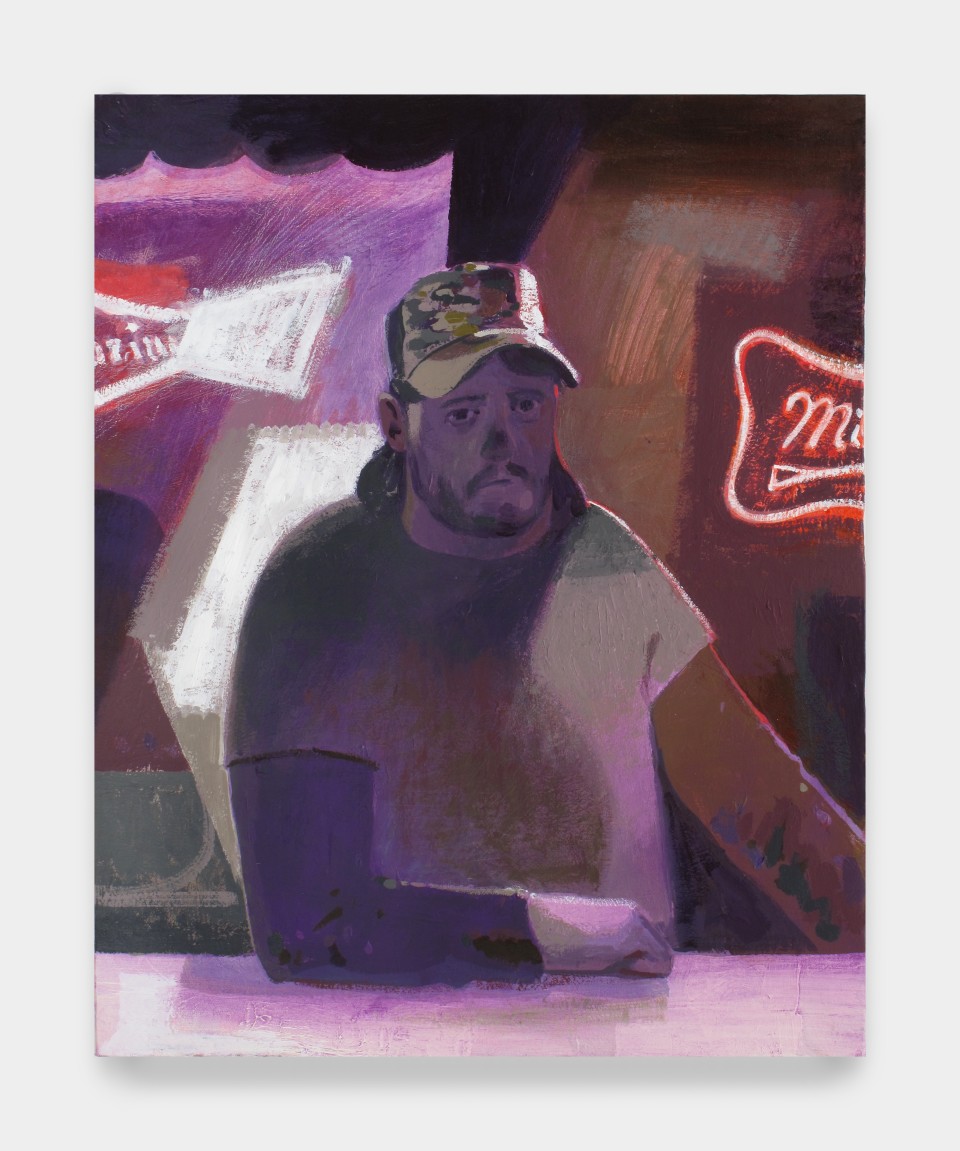 Oscillating between such moments of stillness and presence, the artist’s figures exude a sense of slowness, even as they transfix into abstract polygons. His figures are as representative of their surroundings––an unmowed lawn, a shiny liquor store counter, the off-white glimmer of a darkened computer monitor––as they are records of bodies in space. With his thin applications of acrylics and vinyls, Bollinger’s working figures become reflected and refracted into flights of color. It’s easier to observe the colors themselves than what is precisely being depicted, and at the core of each canvas rests a heavy dullness, as if the figures themselves are in the process of becoming objectified. 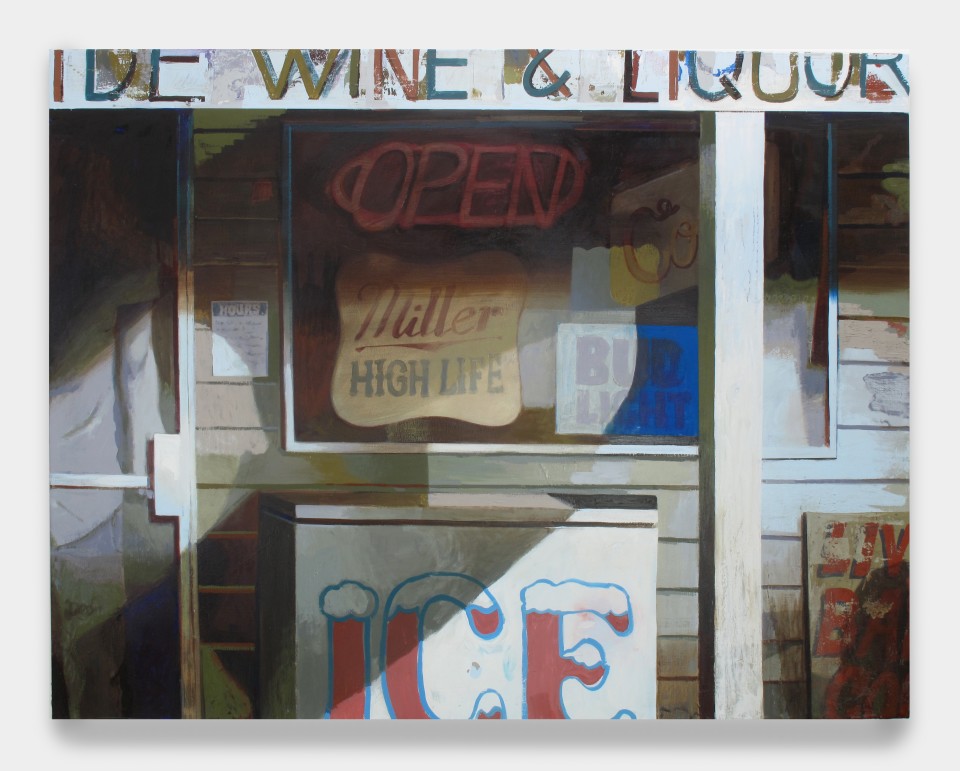 As the show’s titular painting suggests, Bollinger showcases a doubleness of labor: its engagement with and estrangement from the human. A barely recognizable reddened hand reaches through the surface of Sorry We’re Closed, as other hands in Sharing Smokes, Letter Jacket III and Insomnia brandish dying cigarettes. Yet perhaps the most striking work is the cut-off Opening at Quietside, a Hopperesque rendering of the moment before the morning clerk unlocks the solemn glass doors. Bollinger’s canvases uniquely suspend themselves between movement and tranquility––the viewer must implicitly imagine swirling cigarette smoke, the swift turn of the “Open for Business” sign and shafts of light raking the pieces. 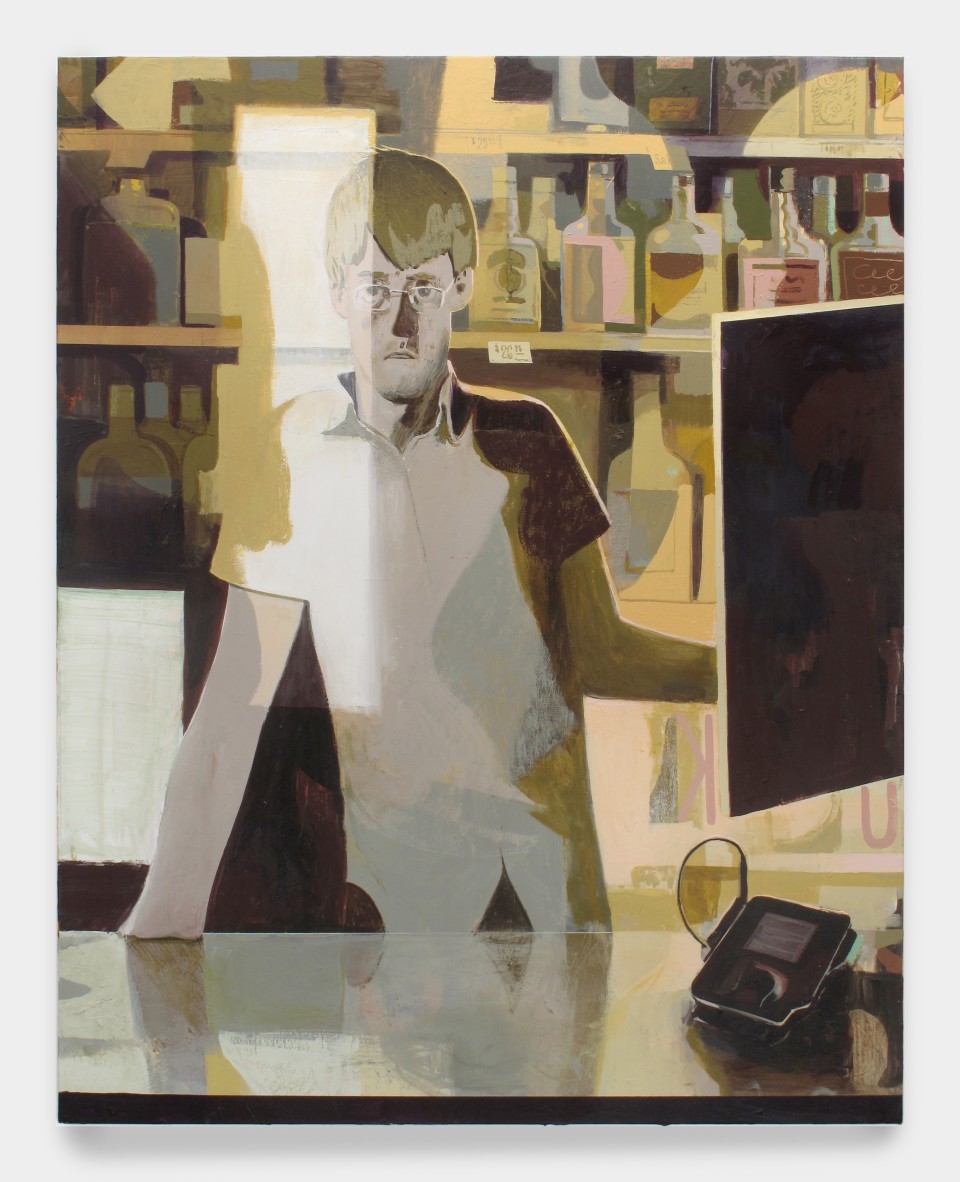 An absence of naturalism ties the works together as Bollinger catches his characters in the memorialized process of waking up. Just as Emily Dickinson’s bucolic shafts of light “tell all the truth but tell it slant,” Bollinger’s art reeks of absences. Forlorn eyes, contrasting contour lines and the suggestion of isolation pervade. 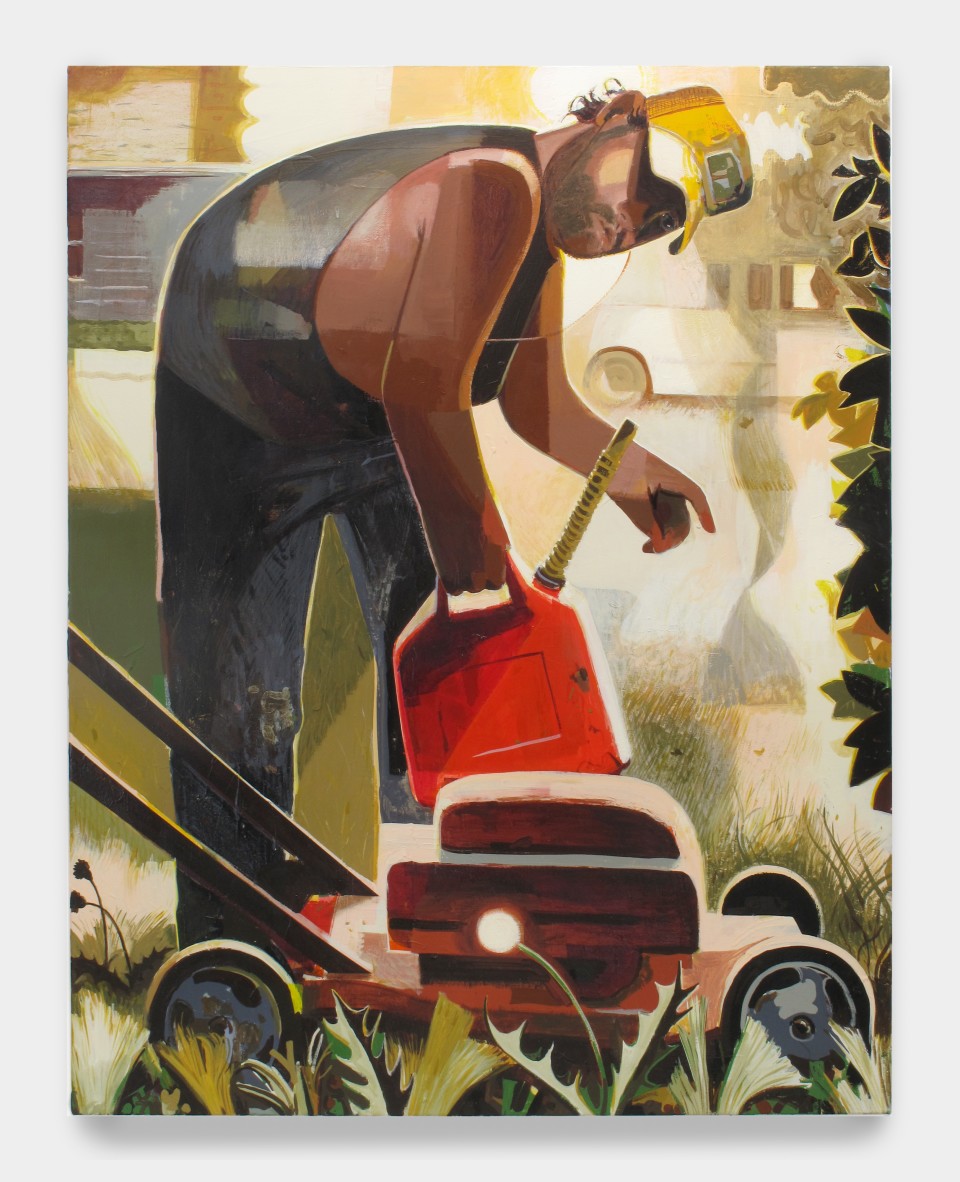 Labor Day itself features only the suggestion of a human figure, made visible by a moving foot in the lower left-hand corner. The last work painted for the show, this canvas is devoid of human life and displays a kind of frenzied stillness of an auto-repair business about to open a tad past 7am. With a “labor rate” sign prominently displayed in the window, the shop itself closely resembles a miniature art gallery, as the rising sun illumines the various pastel yellow and red surfaces populating the floor. Rife with clear shadows and objects viewed through a nearly-opaque window, the shop acts as a mausoleum of vivacity; the burgeoning green foliage and pink-colored bricks signal a ritualistic return of life. 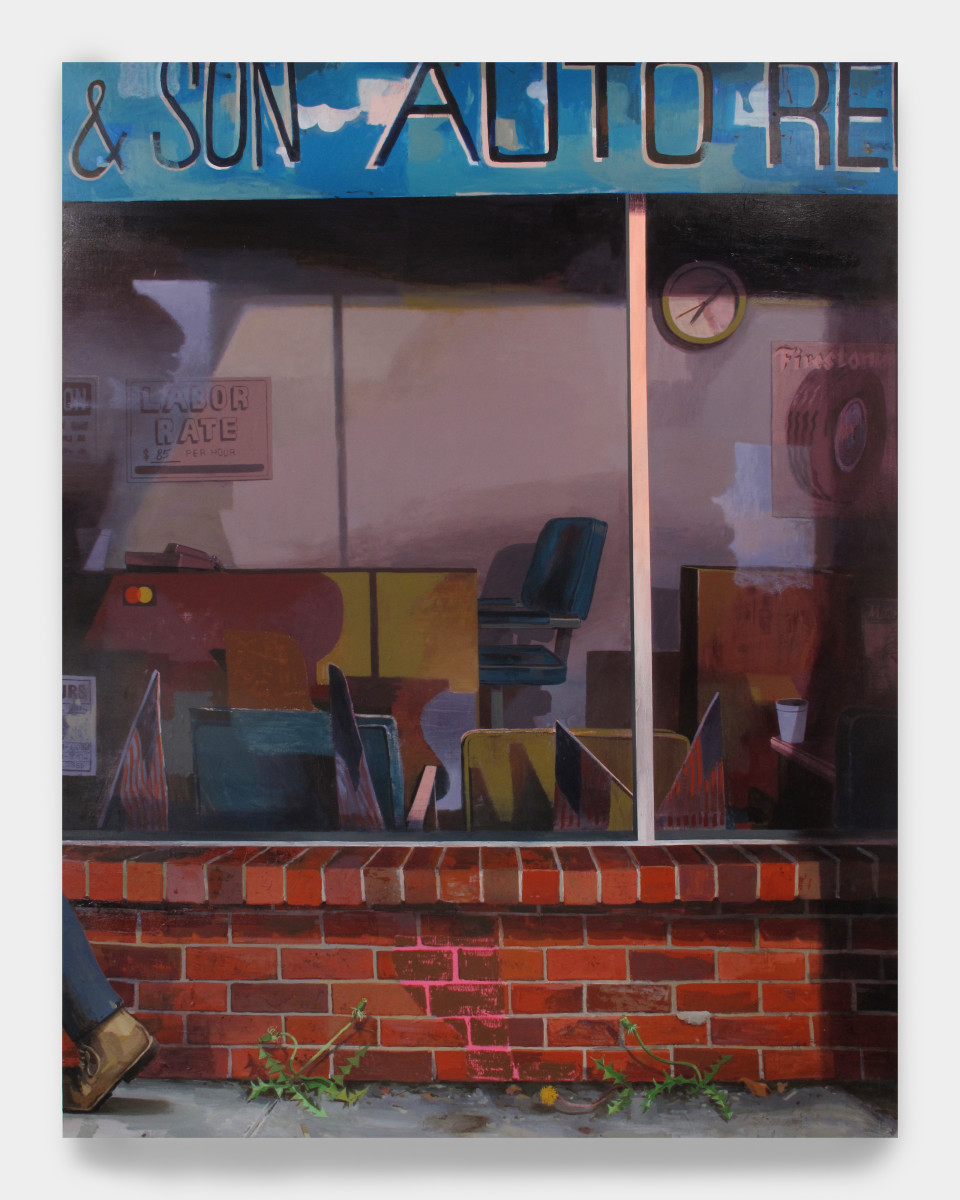 It is only in such moments of stasis and absence when a sense of fulfillment takes place. On the wings of a chance encounter between light and life, Bollinger’s canvases portray an aesthetic promise of a halcyon American dream. Yet, in the hidden core of this endless monotony, that hopeful dream loses its luster, transforming into nothing more than, well, sullen labor. 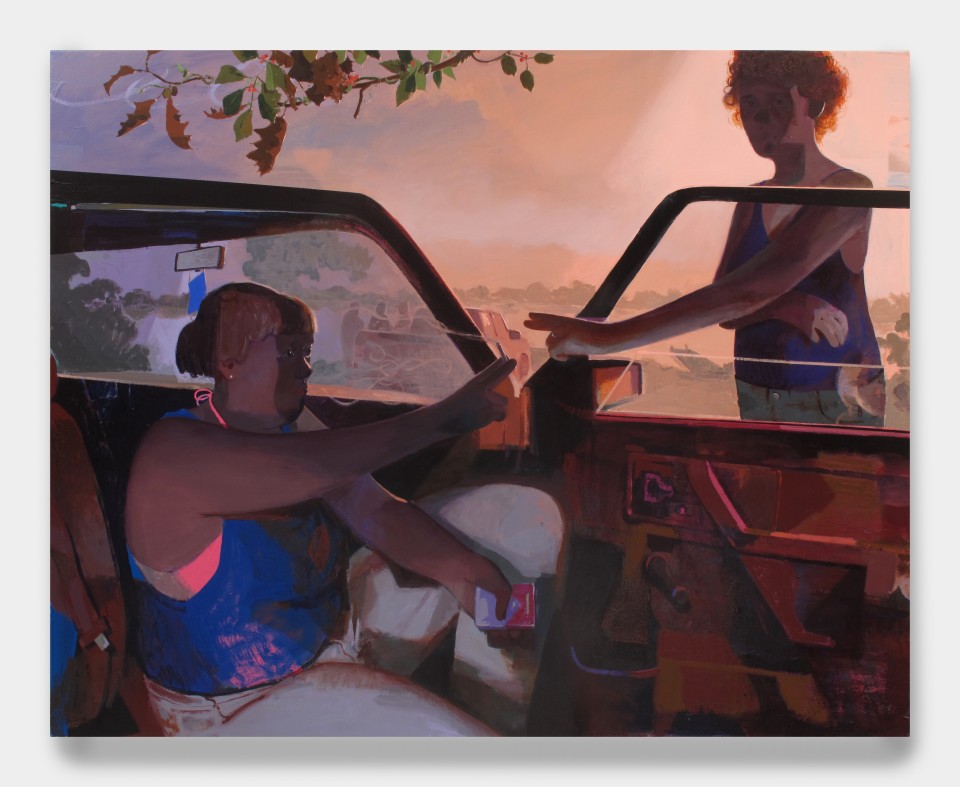