Gregory Crewdson: ‘An Eclipse of Moths’
Grandiose Epics Existing Out of Time 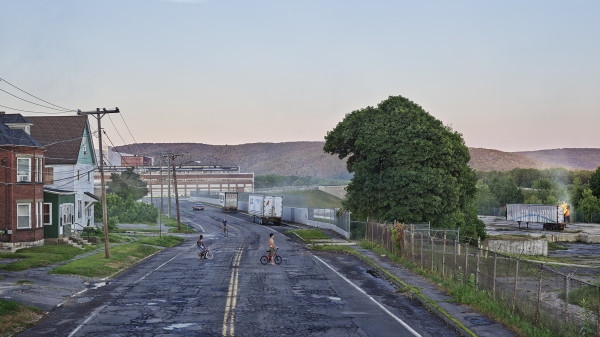 An Eclipse of Moths

The sixteen images in Gregory Crewdson‘s exhibition, An Eclipse of Moths depict isolated individuals in abandoned, dystopic small town environments. Crewdson picks locations (these images were shot in Pittsfield, MA in the summer of 2018) and works with a large crew, directing his actors, finessing the lighting, dampening the streets, placing props and selecting the vantage point for the camera. In An Eclipse of Moths, there is a similarity to the photographs, as they are mostly shot from above, looking down on the scene, framing people who appear frozen in time, as if they were about to do something but cannot remember what. Though created before the pandemic, they echo the sense of hopelessness and despondence that permeates the now. 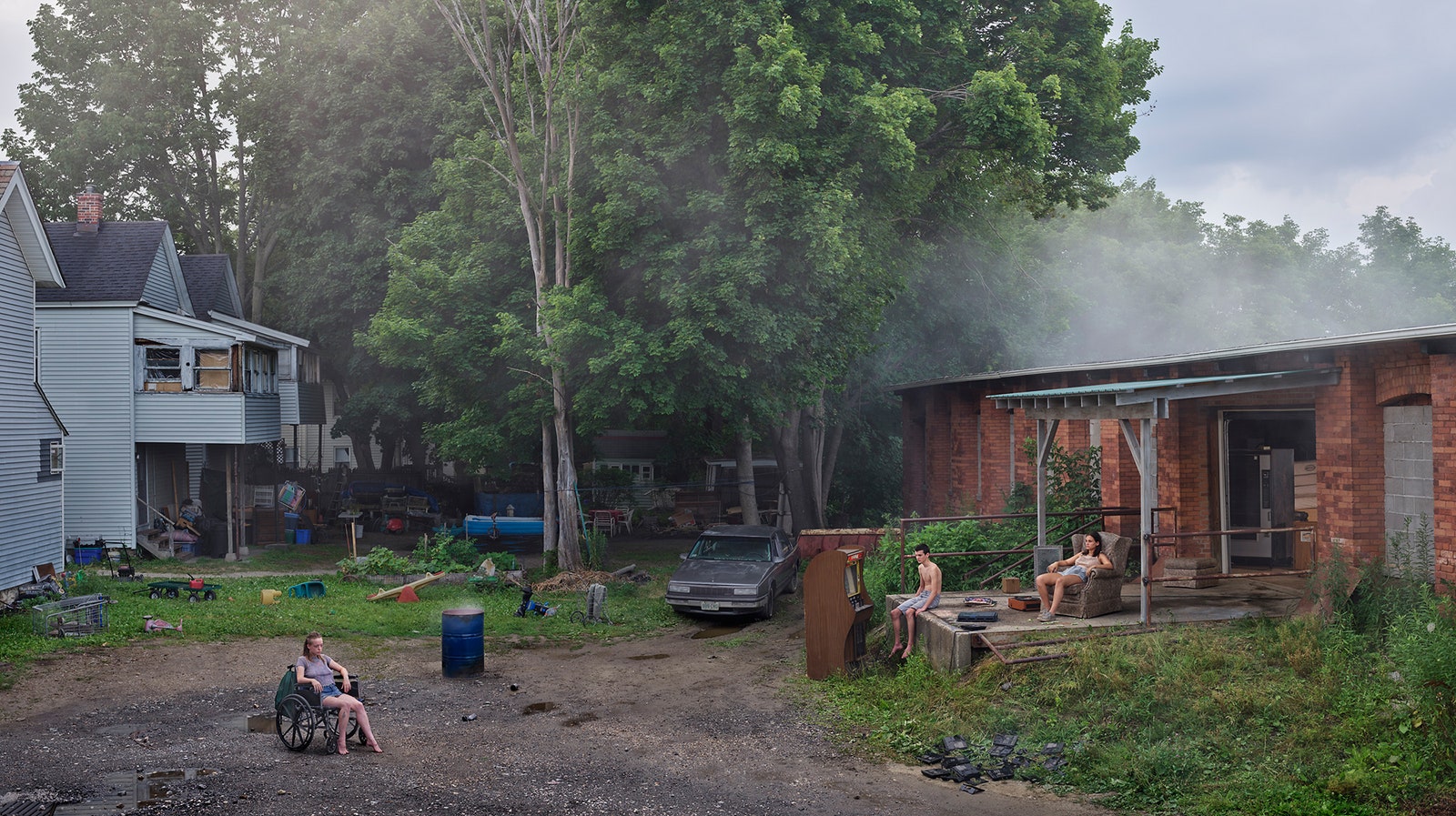 Like on an involved film set, the settings and props Crewdson assembles for the photographs are ‘real,’ however the scenarios he orchestrates are fictions. He hires actors, finds appropriate props and sets the stage for action to unfold, but because he is making still images, the action represents a single moment along some imagined continuum. For instance, in Redemption Center (all works 2018-19), a partially bald, gray-haired, shirtless man gazes into a puddle. His shopping cart, filled with bottles and other detritus is a few feet away, as is a blue child’s bicycle, on its side as if left in a hurry. 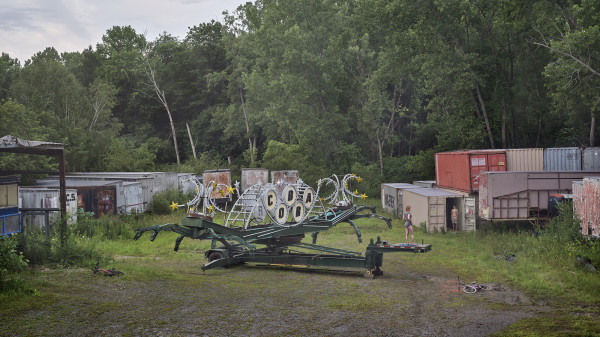 The majority of the foreground shows a large vacant parking lot. About a third of the way back and in the center of the photograph is a single light pole that divides the composition in half. It guides the viewer’s eye right of center to a building that gives the photograph its title — Redemption Center. All of this action (or inaction) takes place on “U…” Street. Two billboards, one celebrating the ‘Birds of the Northeast,’ tower above a bar that has two old Cadillac sedans in the parking lot it shares with the redemption center. On the other side of the composition, a male teenager sits in the open doorway of a white trailer in conversation with another boy wearing a maroon hoodie. The image and road extend to the right into a residential neighborhood. The title and choreography of the elements — the light, the signage and billboards, the presumably homeless man’s demeanor— call into question the notion of “redemption” and what it means to be saved from sin or evil. 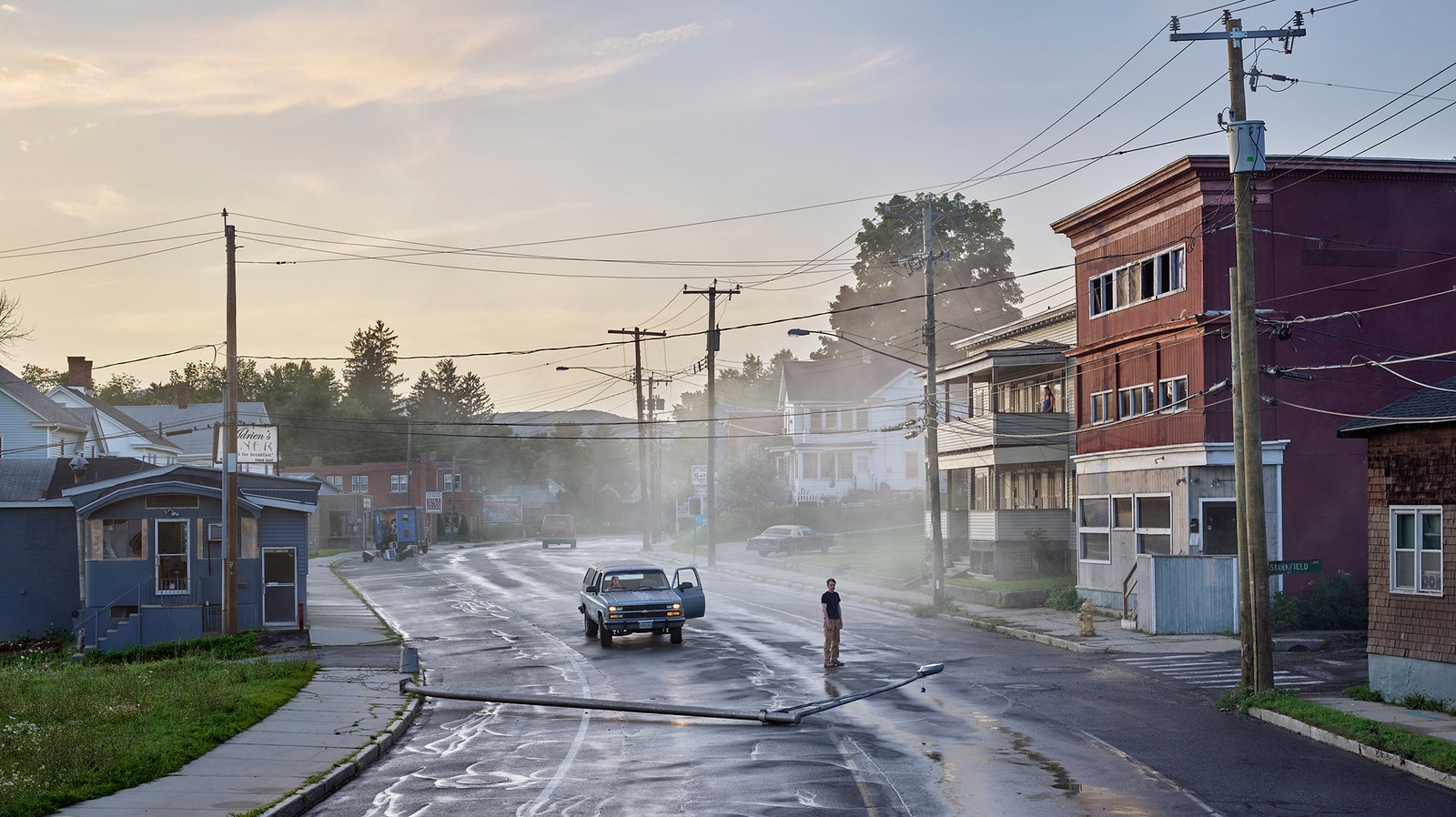 Who or what is evil in today’s world echoes through Red Star Express. Three boys on BMX bikes gaze, but do not react to a trailer in flames in a vacant lot not far from the middle of the road where they are situated. Like Redemption Center, this photograph is shot from afar and above, in an empty expanse of road that eventually recedes into the distance and fills the foreground. The setting is rural. On one side of the street are one and two-story homes, on the other side, Crewdson places the burning trailer in a secured area, behind a fence, surrounded by concrete. A large tree leads the eye to a grassy embankment and toward rolling tree-lined hills in the distance, beyond what appears to be a warehouse or factory. Questions arise. Did the boys set the fire? Is this kind of destruction so commonplace that no one bats an eye? 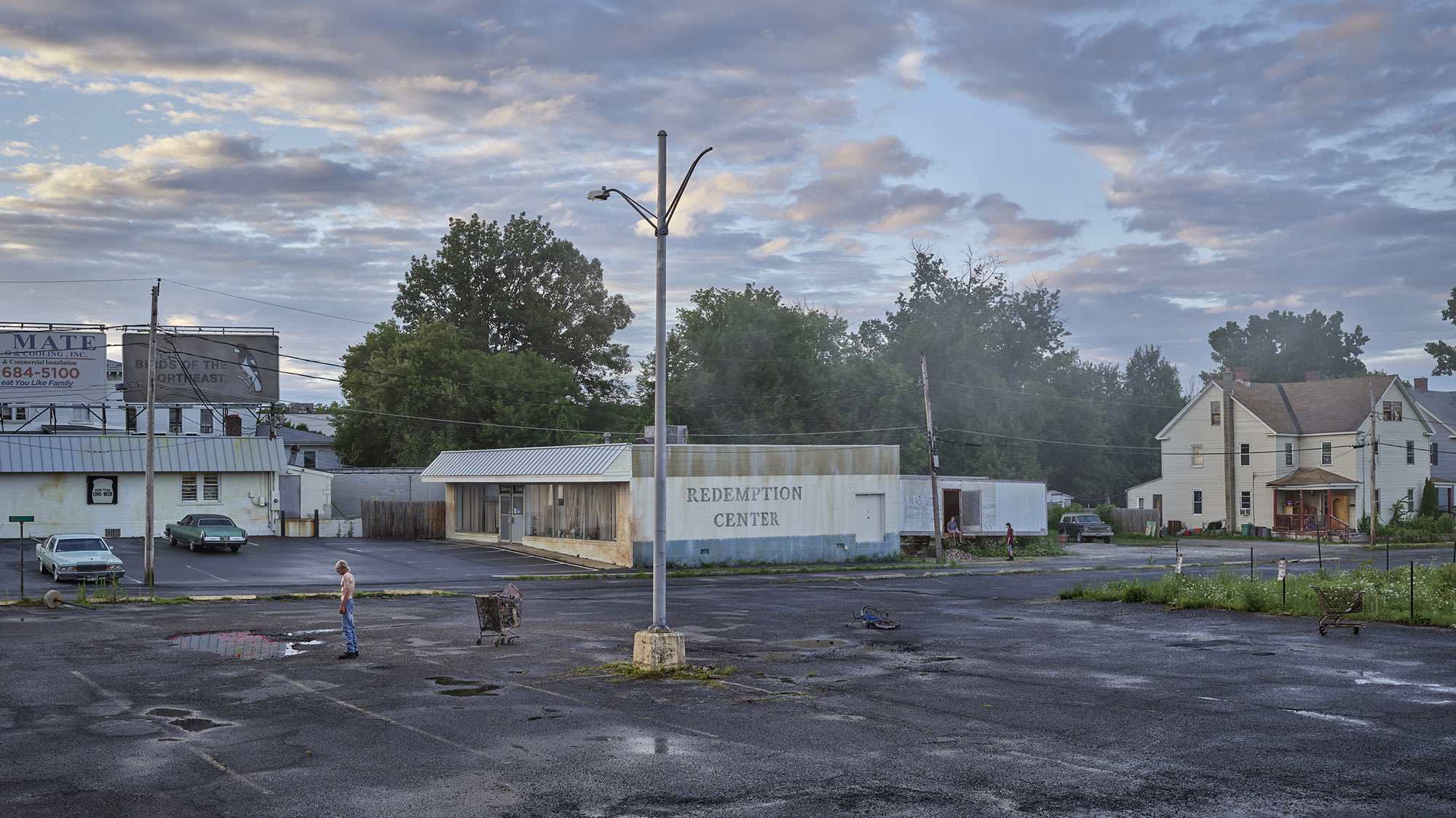 In the center of The Taxi Depot, a half-dressed woman sits on a tree stump. She is flanked by an abandoned 1960s Chrysler and a dampened mattress upon which two boys sleep. There is also an old truck filled with furniture that appears to be ready for the dump. The depot has a flat roof and a pile of tires and other junk outside its door. Attached to it is what could be the family’s home. The sky is a light blue-gray and the driveway/parking lot is filled with puddles as if there had been a recent rain. In the distance, alongside some railroad tracks, a shirtless man sits in a motorized wheelchair. The photograph presents a moment of stasis, with the viewer is left to fill in the blanks and construct his/her own narrative about who these people are and what exactly is going on. 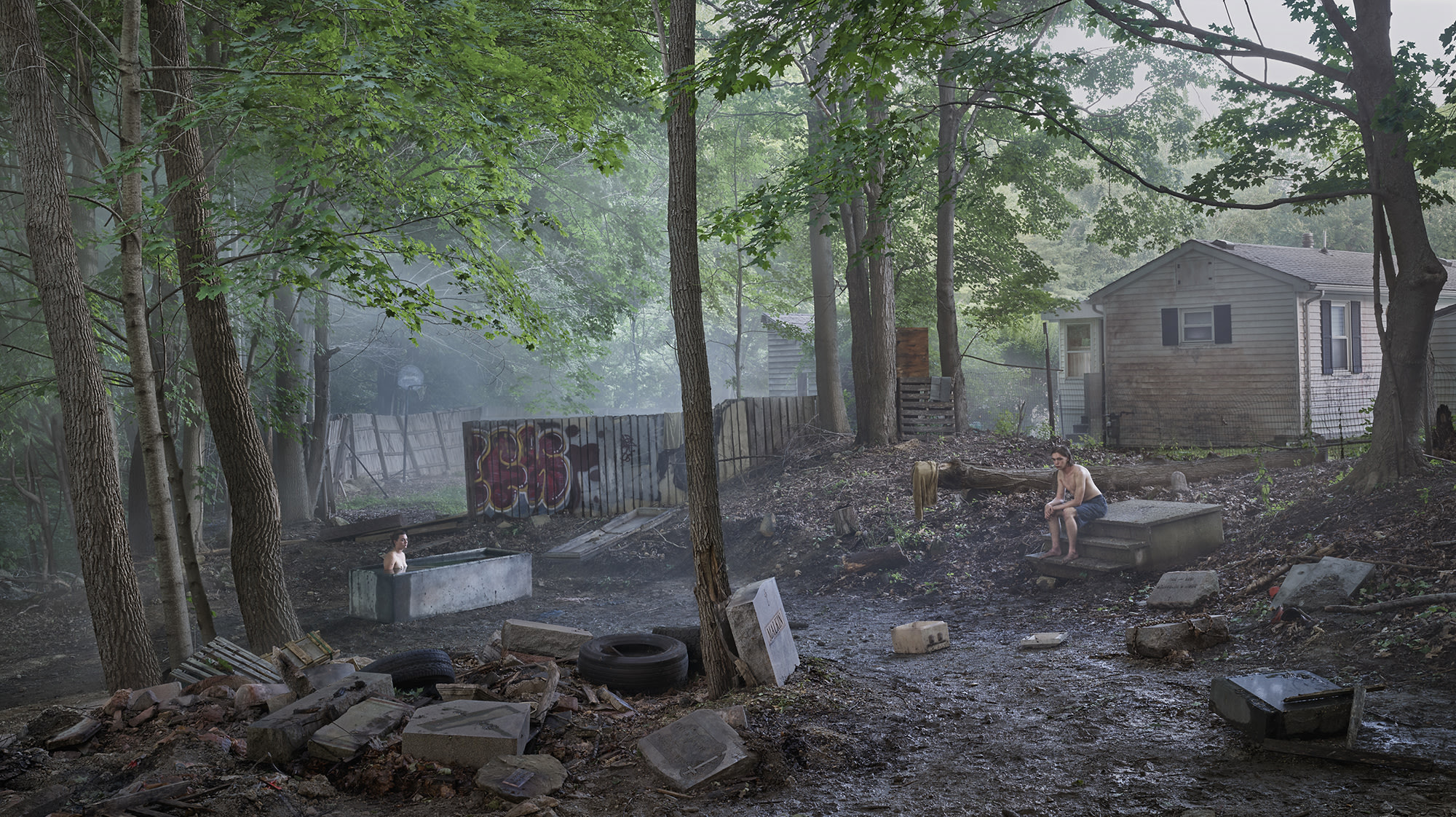 All of these lone figures are akin to moths who flock to the light, though in these pictures the people are motionless, and instead of being an attraction, the light is oppressive. It is neither inviting nor seductive but merely a time of day, either before sunset or just after sunrise when the air and atmosphere are still. In creating these images, Crewdson positions the viewer as a voyeur or a spectator who witnesses the aftermath of something that is never revealed, but only alluded to. What caused the light pole to topple into the street in Starkfield Lane? Or the traffic light to fall and remain crumpled on the side of the road in Alone Street? While the photographs in An Eclipse of Moths are less surreal, yet more banal and melancholic than in some of Crewdson’s previous series, they still exhibit a strangeness— a kind of Twilight Zone inexplicable uncanniness like the appearance of an empty gurney in Cherry Street, or an abandoned baby carriage in Alone Street. 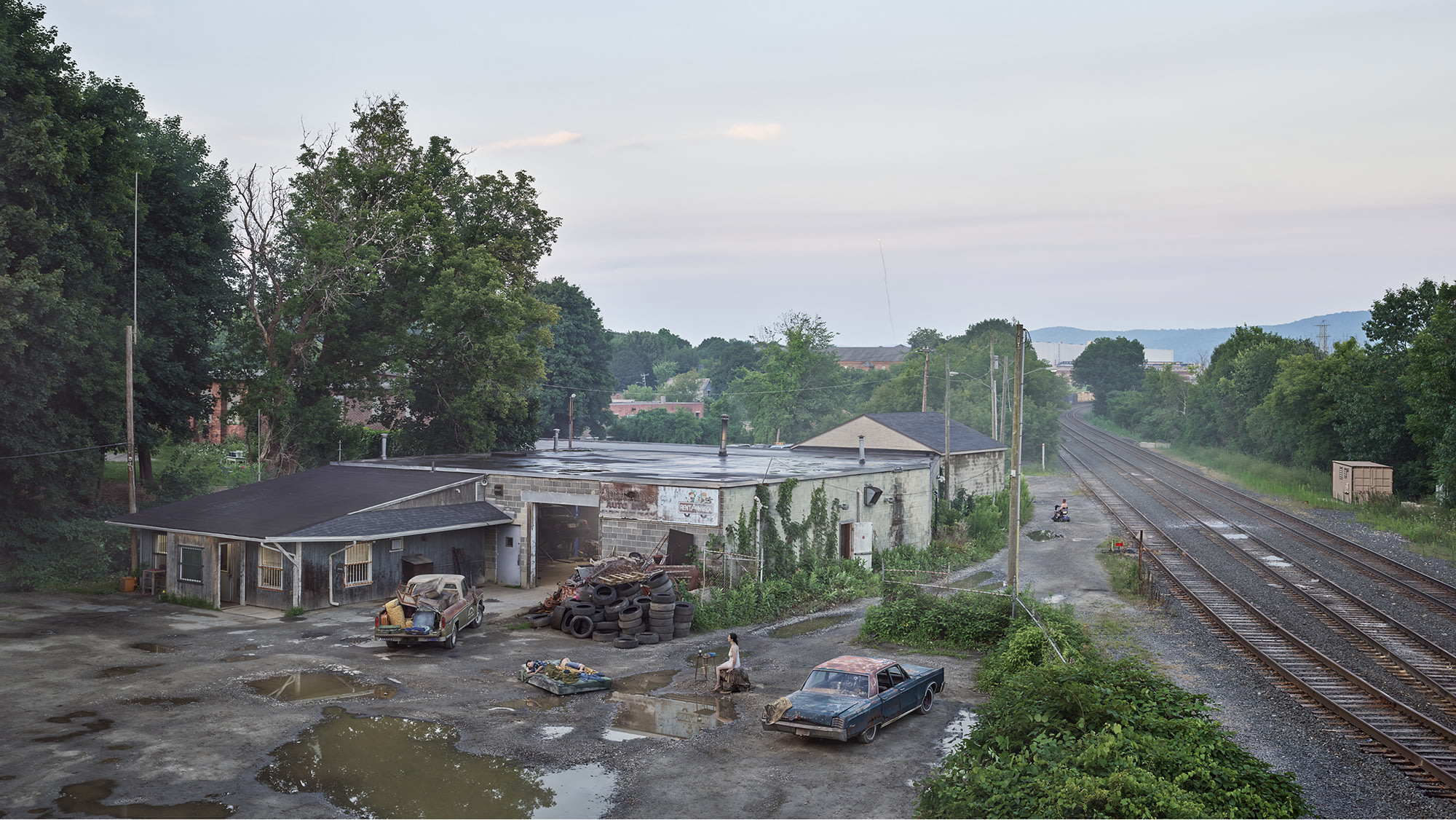 The slice of life Crewdson chooses to depict is specific: These images for the most part depict the impoverished, homeless and disabled, living in small town America among abandoned cars and dumpsters, apparently cut off from the world at large. Their expressions, when visible, are blank and matter of fact, as if hardly affected by the dramas that surround them. The scenes Crewdson fabricates are self-contained, offering little that connects the inhabitants to anything outside the boundaries of the image. Is Crewdson a neutral observer who does not pass judgement? While these constructed scenarios appear real, they are entirely fictions and as fictions they have been carefully scripted and staged. Why stage images of such acute poverty, abandonment and despair when it actually exists? What does Crewdson add? The pictures don’t suggest hope amongst this poverty, but rather indicate that people can survive in just about any conditions, going about their everyday lives oblivious to and unconcerned with that which surrounds them. 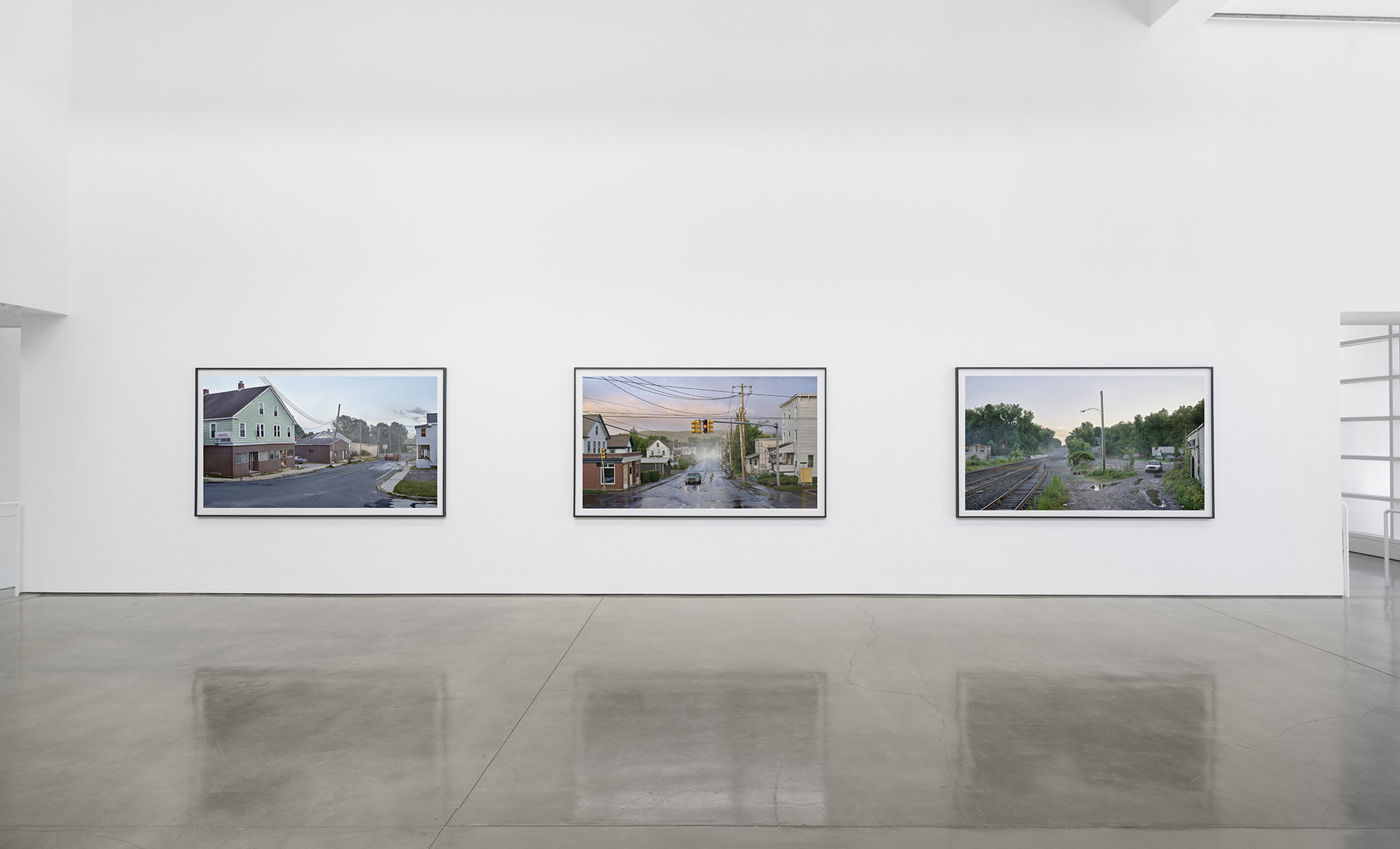 Installation view, An Eclipse of Moths

In many ways Crewdson’s images exist outside of time. They are grandiose epics that are unspecifically nostalgic, while simultaneously taking place in the present. It is impossible not to view them through the lens of COVID-19, the directive to keep a distance and to stay at home. Perhaps these pictures are about the long-term impact of poverty and isolation— as beautiful as the images may be, they are not ‘pretty pictures.’