Election 2020: Casting Ballots at The Music Center of Los Angeles
The Intersection of Art and Democracy 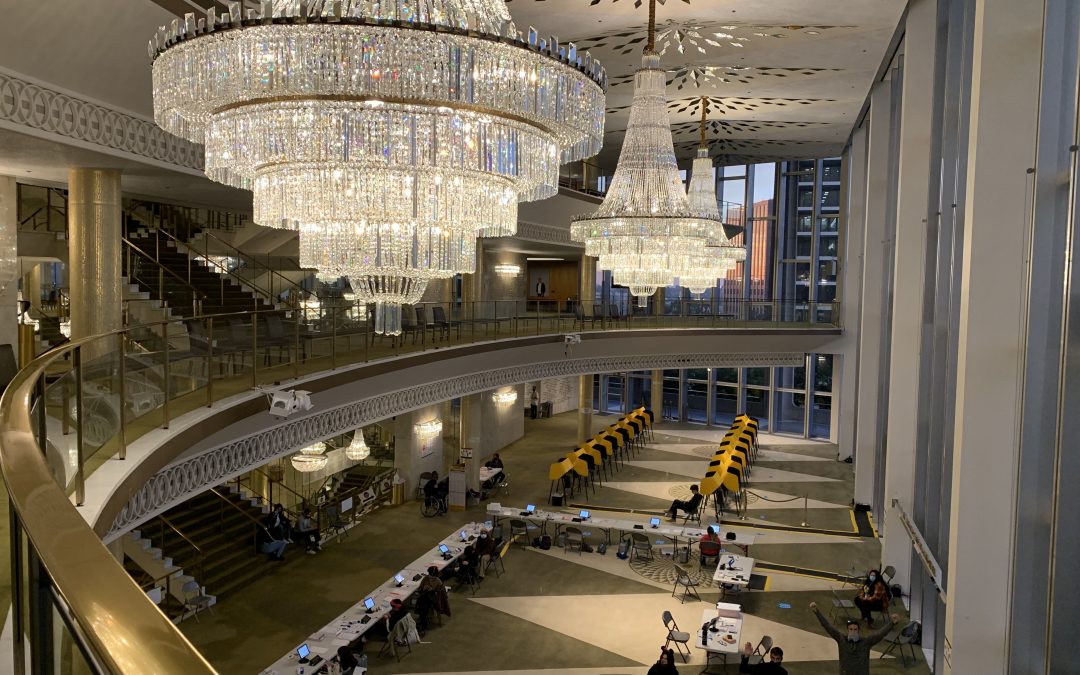 If you were in Los Angeles during the 2020 election, you might have wandered over to Staples Center, Dodger Stadium or the Grand Central Market to cast your ballot. Each location has its charms––special “I Voted” stickers, Lakers’ facemasks, yoga in waiting areas. But if you happened to have wandered into downtown Los Angeles’ Music Center Polling Center, you’d be treated to a nearly-private art exhibition in the middle of a sea of yellow voting machines (affectionately known as Ballot Marking Devices). 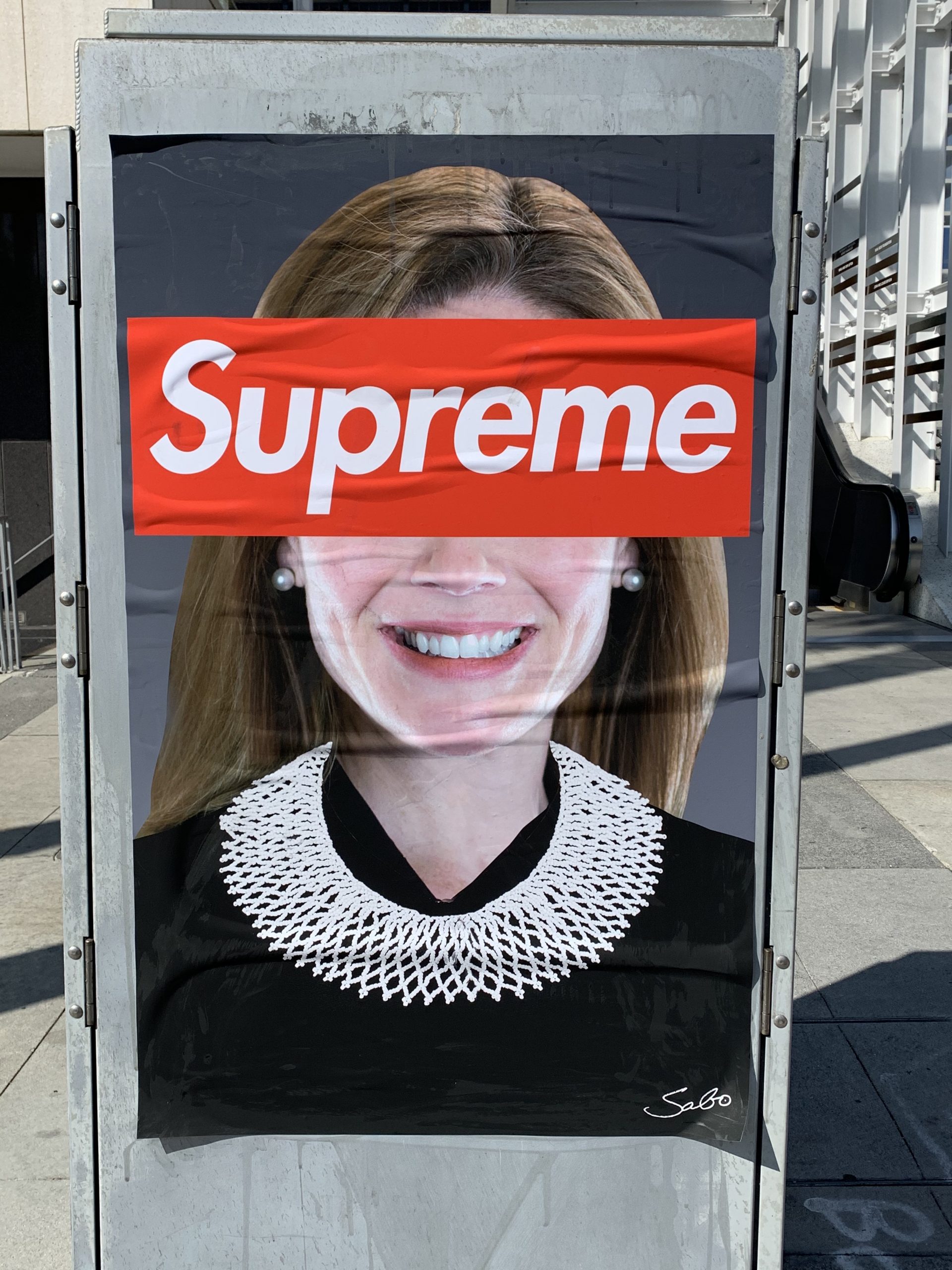 Working the polls this year, I spent ten days amid the confluence of Día de los Muertos displays, vaulted marble ceilings and a curated series of abstract expressionist works. Serving both unhoused voters and Music Center trustees, this center lies at the intersection of democratic and elite spheres –– a tax payer-funded edifice, adorned with the gilded names of Forbes 500 corporations. The extension of the globalized art market within a public community space feels performative at best and disorienting at worst. 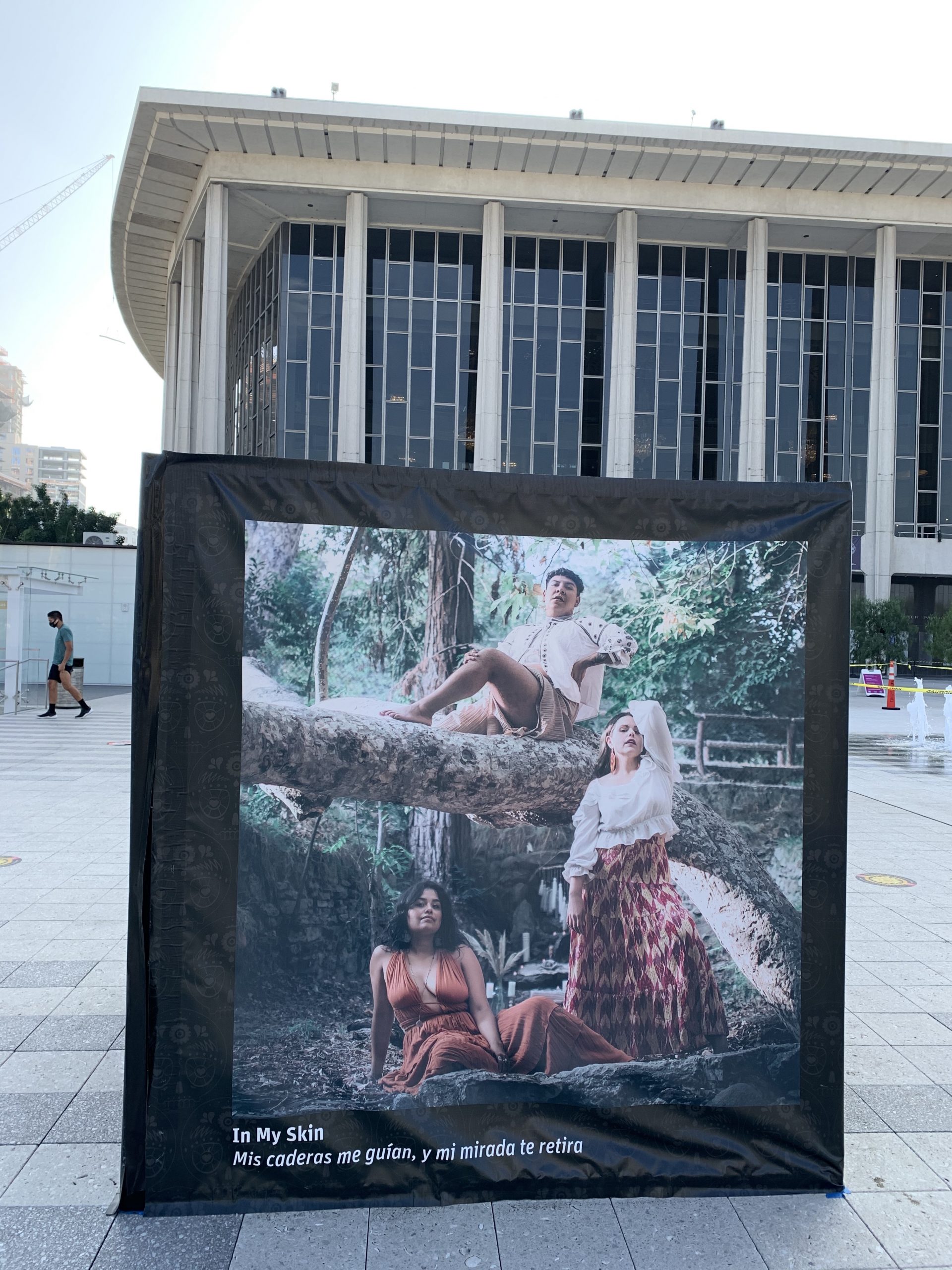 If ever there had ever been enough voters to line up on the street, they would have been confronted by a Barbara Kruger-inspired détournement SUPREME over Amy Coney Barrett’s face, safely positioned outside the 100-foot electioneering perimeter. Making their way to the front entrance, voters can view several Digital Ofrendas (altars), strategically placed around the concrete plaza (and nearby in Grand Park) in lieu of the customary Día de los Muertos gatherings. Faces of deceased community members populate various screens nestled among Soul Survivors, a photographic installation that highlights Black solidarity and healing. While unrelated, these two separate art projects create a sense of collectivity and locality among the otherwise somewhat placeless plaza. 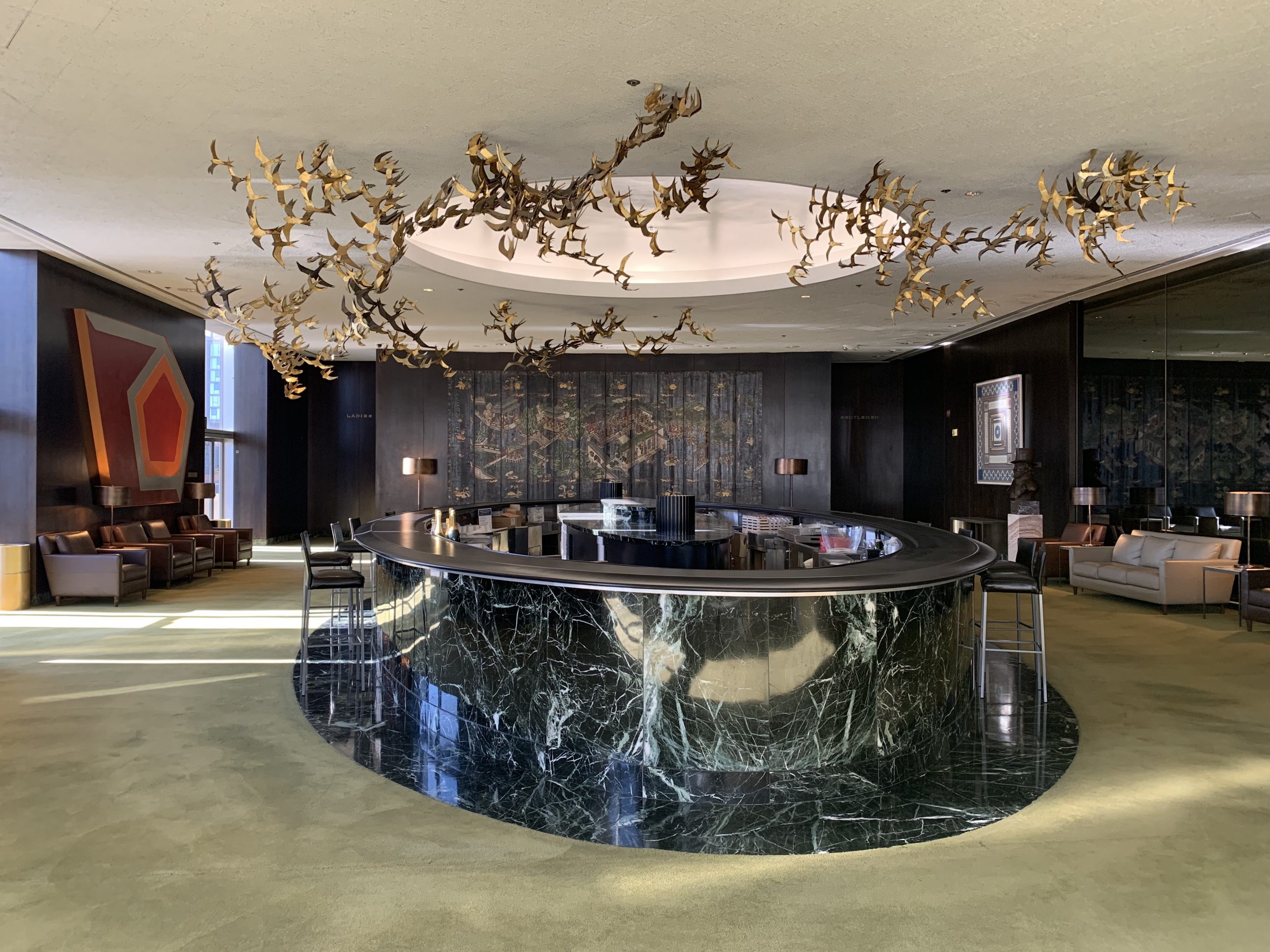 Once inside the Dorothy Chandler Pavilion, the chaos of Grand Avenue –– street protests and skateboarding children likely awaiting the verdict of custody decisions –– fades away. Several sets of glass doors, opened by uniformed Music Center ushers, beckon voters into a large lobby space, replete with an “echo dome” and gilded marble pillars. Filing upstairs in a socially-distanced fashion, voters enter the Eva and Marc Stern Grand Hall, site of many a Los Angeles Opera party, before being welcomed by election volunteers decked out in PPE and electoral regalia, with voters able to take their pick of the hand sanitizer, masks and gloves littering the folding tables.

Danielle Perez, a wheelchair-bound comic who went viral in 2015 for winning a treadmill on The Price is Right, came to the Music Center at the urging of her poll-working friends. “It felt peaceful, which is something that I haven’t felt a lot in this pandemic and election season in general,” Perez said.

Countless other voters remarked on the “class” and “beauty” of the space, physical reminders of the juxtaposition of crystal symbols of opulence with a rising unhoused population in Los Angeles County. There is a striking disconnect between the electoral democracy occurring within its hallowed walls and the unhoused residents lining the streets outside. Heightening this fissure, several voters, having already cast their ballots at other polling centers, came to take selfies beneath the trio of sparkling lighting fixtures that adorn the space. 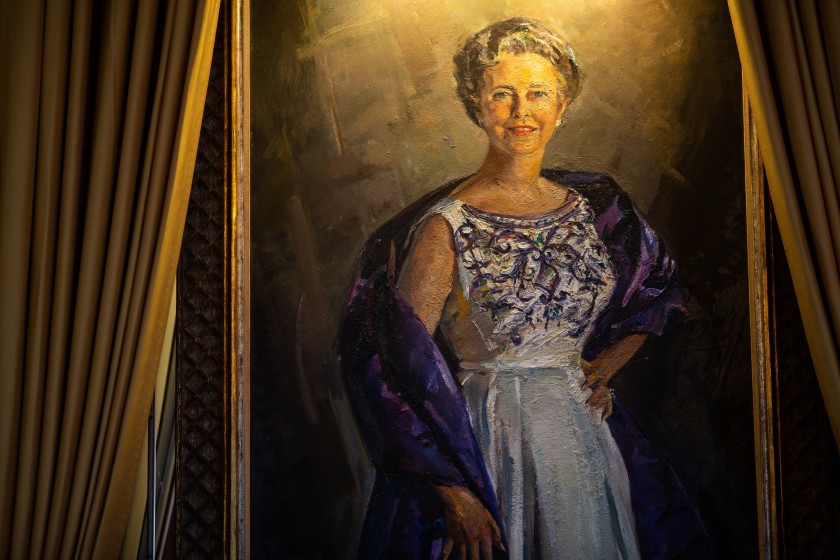 Architecturally at the crossroads between a Neo-Classical sensibility and community-constructed displays, the Pavilion contains the historical record of its own conception. In the nearly hidden Founders Room hangs William F. Draper’s portrait of Dorothy “Buffy” Buffum Chandler, who donated the $400,000 seed money that jump-started the construction of the space that opened in 1964. Now, eerily lit in the darkened room, Chandler’s likeness stands guard over shadows and dust. On the opposite side of the Grand Hall, the Center boasts a series of abstract expressionist pieces. Surreptitiously placed around the antique marble bar that is normally a hive of activity in pre-COVID times, the area is now left to bridge the distance between the voting machines and the restrooms.

More wallpaper than art, these works feature dark hues, miniature sculptures, and abstract forms that transport voters’ imaginations away from the drab ballot-casting machines. Michael McMillan’s Bunker Hill (1984), a three-dimensional rendering of stacked housing projects, is barely visible from the main room. Its repetitive wooden shade is taken up by Leonardo Nierman’s neighboring Music (1978), a woven quilt that the Mexican-born artist once described as “the eternal romance between music and color.” 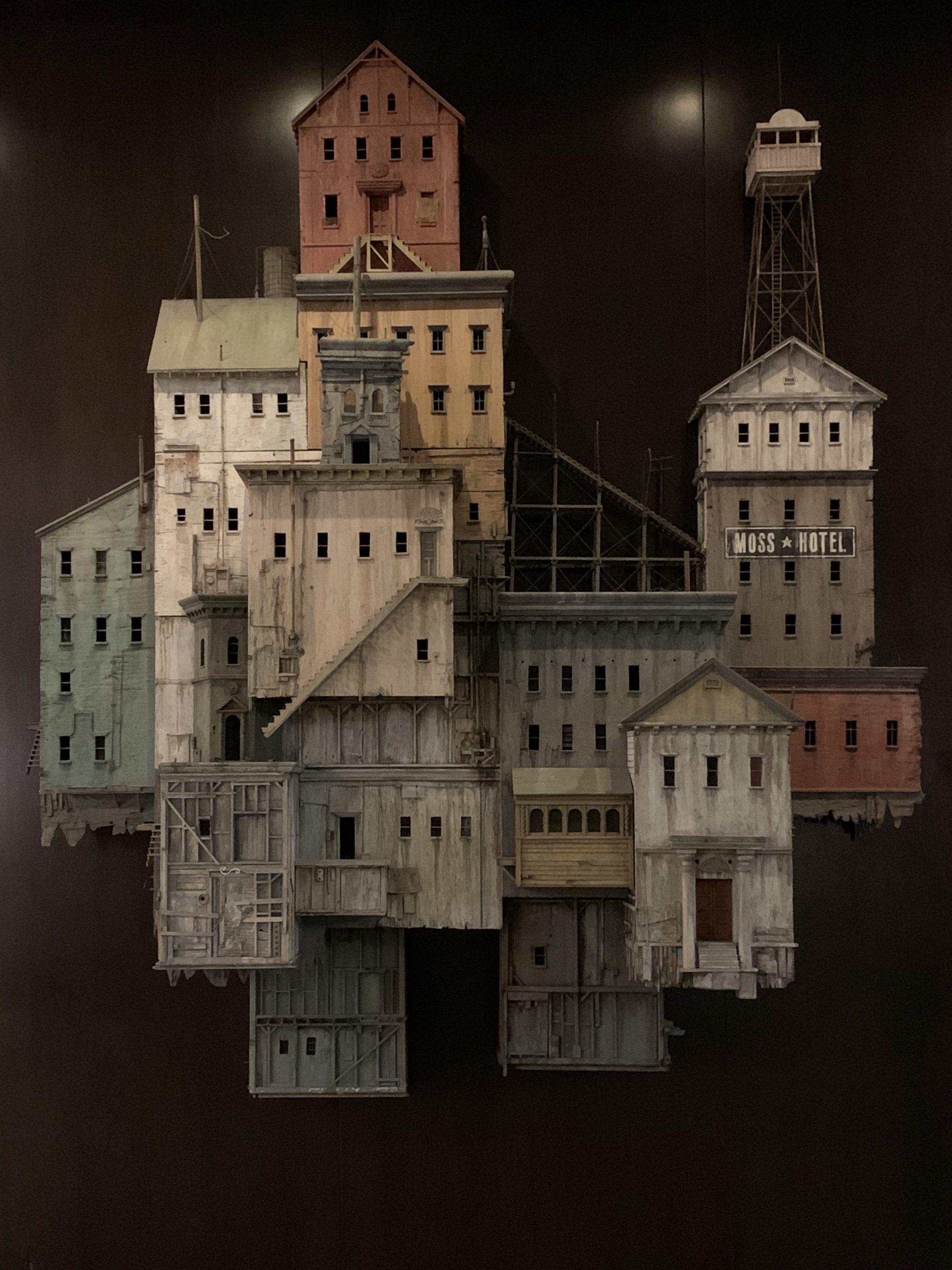 Moving to the center of the room, voters encounter Thomas Hardy’s ceiling-mounted, gold-leafed bronze sculpture, Sun Birds (1964), where some 500 avians glimmer against the room’s floor-to-ceiling matte black mirrors. In this looking-glass world, these works depart from their designated place to inhabit the same virtual and conceptual space as viewers, nearly screaming to be noticed. Flattened in their two-dimensional reflection, each piece of art seems to seep out of its established area and, given space to breathe, Nierman’s swatches of woven color appear to explode, the product of an over-active child’s imagination. This is in subtle contrast to Frank Stella’s minimalist painting, Ossipee III, while cushioned leather chairs also abound, allowing tired voters to sit and even bonk heads against the art. 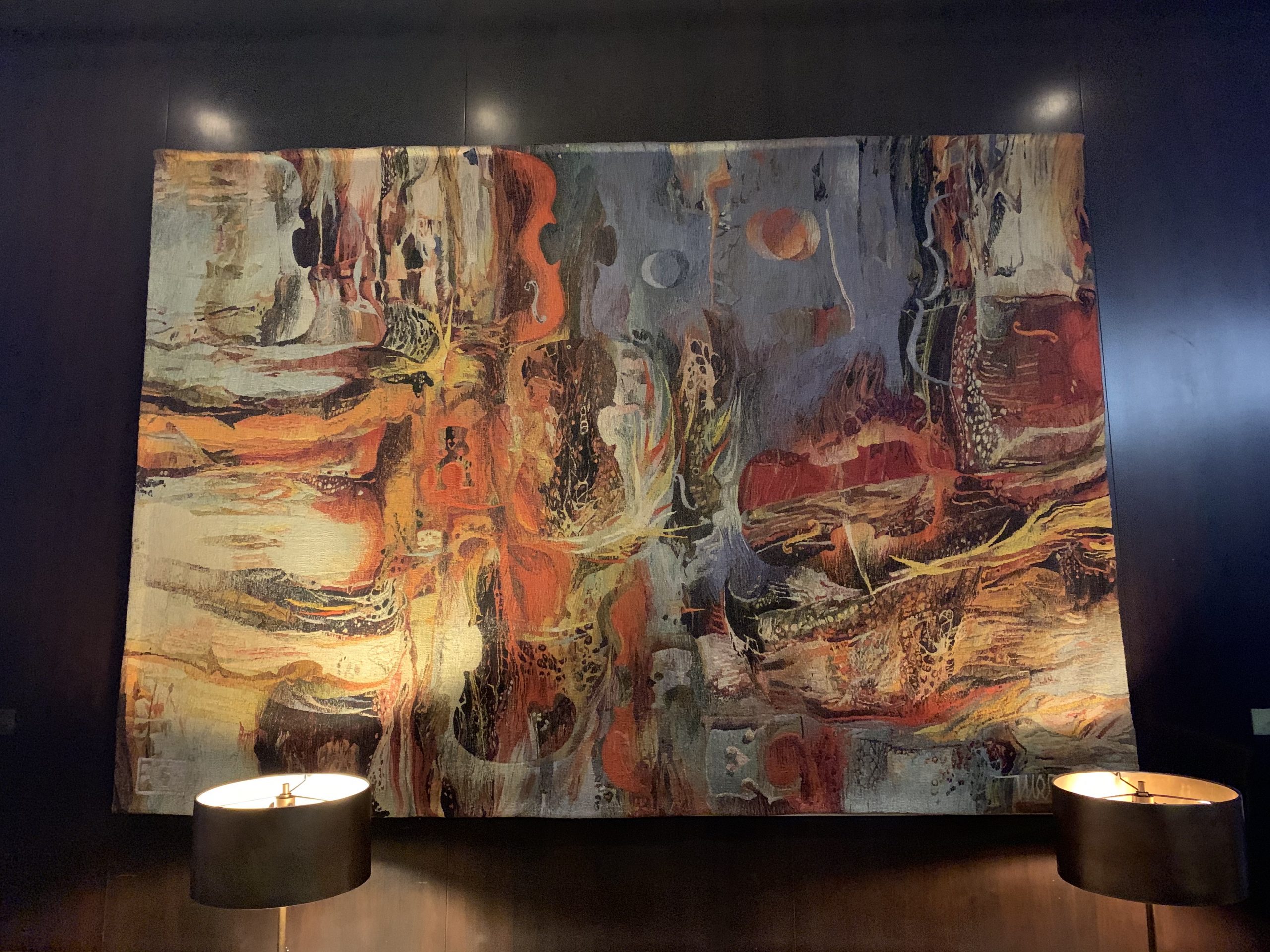 An unattributed Japanese folding screen is flattened and pinned to the wall, while another notable artwork surrounding the bar is Sandi Fox’s Signature Quilt (1982). Unlike the uniform typology of Music Center supporters adorning the lobby, Fox’s handmade quilt features signatures of artists including cellist Yo-Yo Ma and actor Gregory Peck. As a whole, the display evokes a flurry of introspective sensations as color fields collide with the room’s silence and darkened walnut paneling. 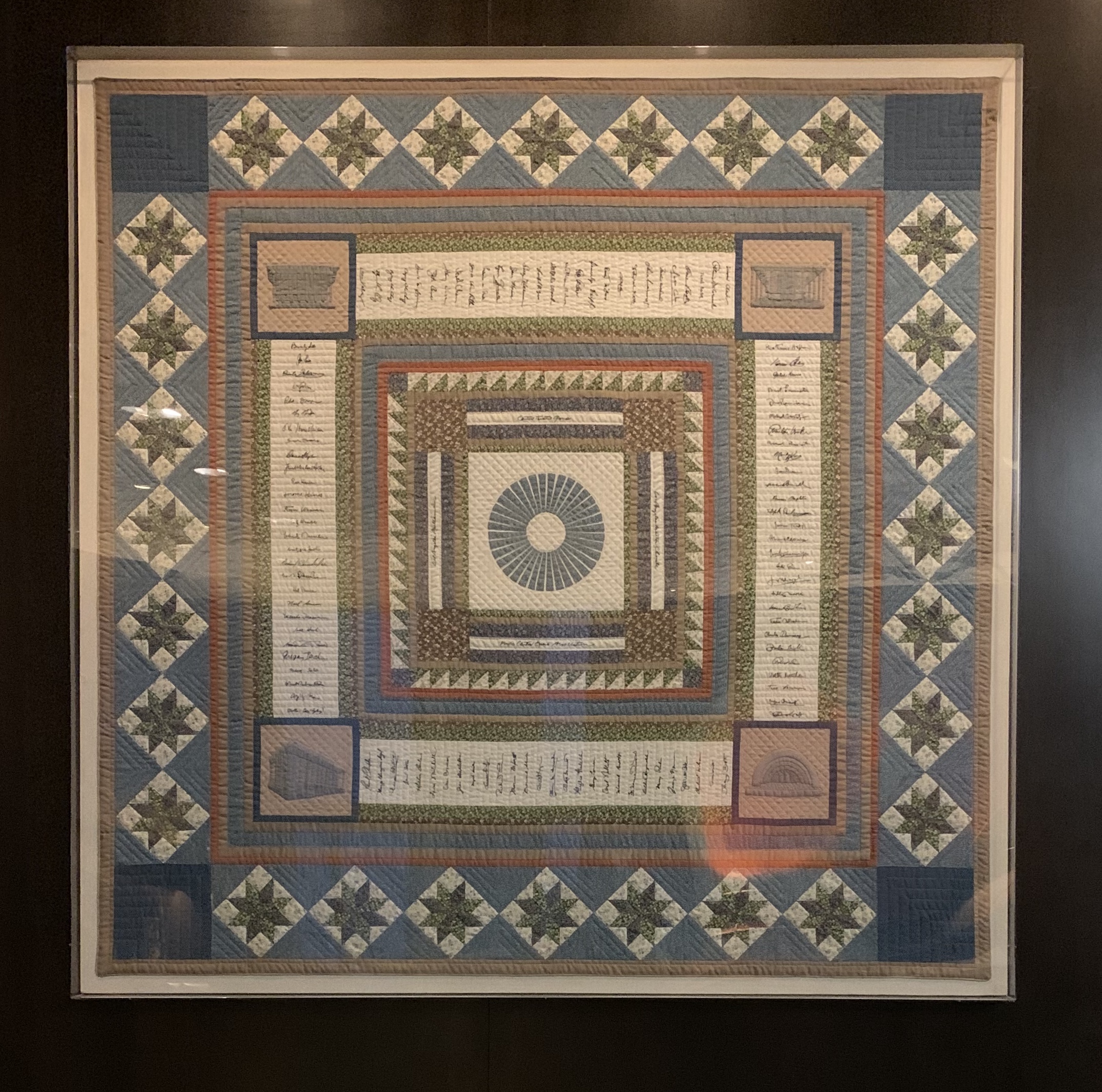 In its quiet seclusion, the collection offers a reprieve from the bustling world outside, with each piece, however, displaying its own kind of heightened fury –– brushwork ranging from thick to burnished suggests a subdued violence. Indeed, this terse environment typified the week’s mood: a sense of overwhelming stasis mixed with the profound importance of the electoral process.

Acknowledged Perez: “It was nice to be in a tax-payer funded space [that] serves a real civic purpose beyond just art in a really crucial way.” 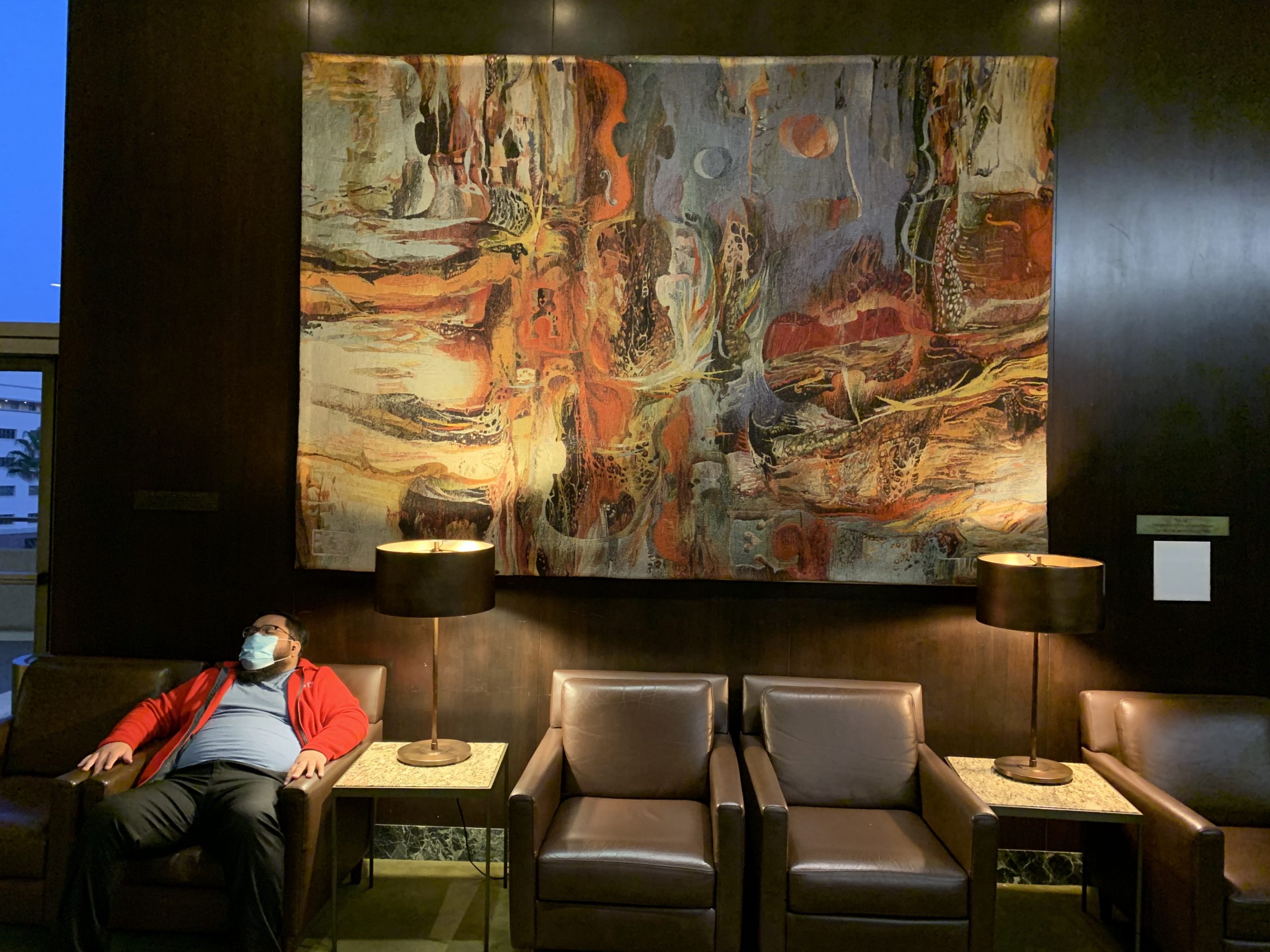 The Music Center allows a multiplicity of interests and perspectives to co-exist uneasily in the same geographic space. Objects as incongruent as Stella’s painting and a Ronald Reagan quote are juxtaposed with the names of the Coca-Cola Corporation, Van Cliburn and Donna Summer. At the center of Los Angeles’ cultural scene, the Music Center represents a possibility for a civically-engaged artistic space, reclaimed for public use… if only there were a public able to use it during this inflection point in our society.

Cover image:The Grand Hall at the Dorothy Chandler Pavilion; all images by the author