Made in L.A. 2020: Off-site Projects by Larry Johnson and Kahlil Joseph Accessible Now 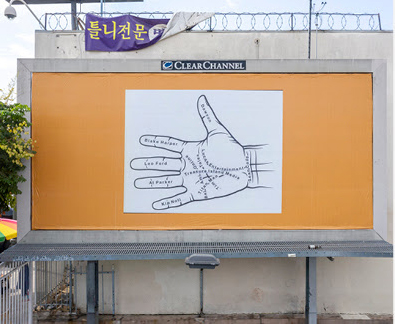 While the Hammer Museum and The Huntington Library, Art Museum, and Botanical Gardens await state and county public health approvals to safely reopen their galleries for Made in L.A. 2020: a version, Angelenos can get a preview of the biennial via two artist projects located around the city. The exhibition catalog, which showcases newly commissioned interventions made by artists specifically for the page and functions as another “version” of the exhibition, is also available.

Made in L.A. 2020: a version, the fifth iteration of the Hammer’s biennial exhibition highlighting the practices of artists working throughout greater Los Angeles, is cocurated by Myriam Ben Salah and Lauren Mackler, with the Hammer’s Ikechukwu Onyewuenyi as assistant curator of performance. All 30 artists included in Made in L.A. 2020: a version will be represented at both the Hammer and The Huntington—in two versions that make up the whole—with select off-site and online interventions in between.

The exhibition’s opening date is dependent on Los Angeles County guidance allowing museums to reopen to the public, in keeping with the State of California’s “Blueprint for a Safer Economy.” Updates about exhibition dates will be shared via the Hammer website and The Huntington website.

Two off-site projects are accessible now, installed throughout the city. The first episode of an artist-created podcast series conceived as part of the exhibition will be available soon.

Larry Johnson’s new site-specific works are now on view on five commercial billboards in the MacArthur Park neighborhood throughout the run of the exhibition. Their content features site-specific texts and visuals. Poetic and humorous interventions into space and local geography, the billboards quote their cultural and quotidian environment. Two of the billboards are located near the intersection of South Alvarado Street and Eighth Street, two near the intersection of South Rampart Boulevard and Seventh Street, and a fifth nearby at Seventh Street and Hoover Street. The presentation is coproduced by The Billboard Creative.

Kahlil Joseph’s ambitious installation of BLKNWS®, a conceptual news program that blurs the lines between art, reporting, entrepreneurship, and cultural critique, is installed in satellite sites around the city. Coproduced by LAND (Los Angeles Nomadic Division), the two-channel video presentations of BLKNWS® are being hosted predominantly in Black-owned businesses such as barbershops and cafés and in other sites of community gathering, as well as commercial hubs and healthcare facilities.

BLKNWS® will also be on view at the Hammer Museum and the Underground Museum, pending approval from LA County for museums to open to the public. More BLKNWS® sites will be confirmed and updated throughout the run of the exhibition. A full list and a map showing each location are available on the websites of the Hammer, The Huntington, and LAND. Major support is provided by Aubrey Drake Graham.

SON., a platform founded in 2016 by Justen LeRoy, has created a new podcast to be released in conjunction with Made in L.A. 2020: a version The first episode will be available soon, and nine more episodes will be released at two-week intervals during the run of the exhibition. The podcast will be available on such platforms as Spotify, Google Podcasts, and Apple Podcasts. Recorded in SON.’s headquarters at the South Central barbershop Touched By An Angel, the episodes feature conversations, cultural commentary, newly commissioned music, and special guests. In the first episode, LeRoy talks to author and activist Darnell Moore (No Ashes in the Fire: Coming of Age Black and Free in America) and filmmaker and entrepreneur Curtis Taylor Jr. (The Greens Co.) with soundscape by producer Slauson Malone. Podcast updates will be shared via the Hammer website and The Huntington website.