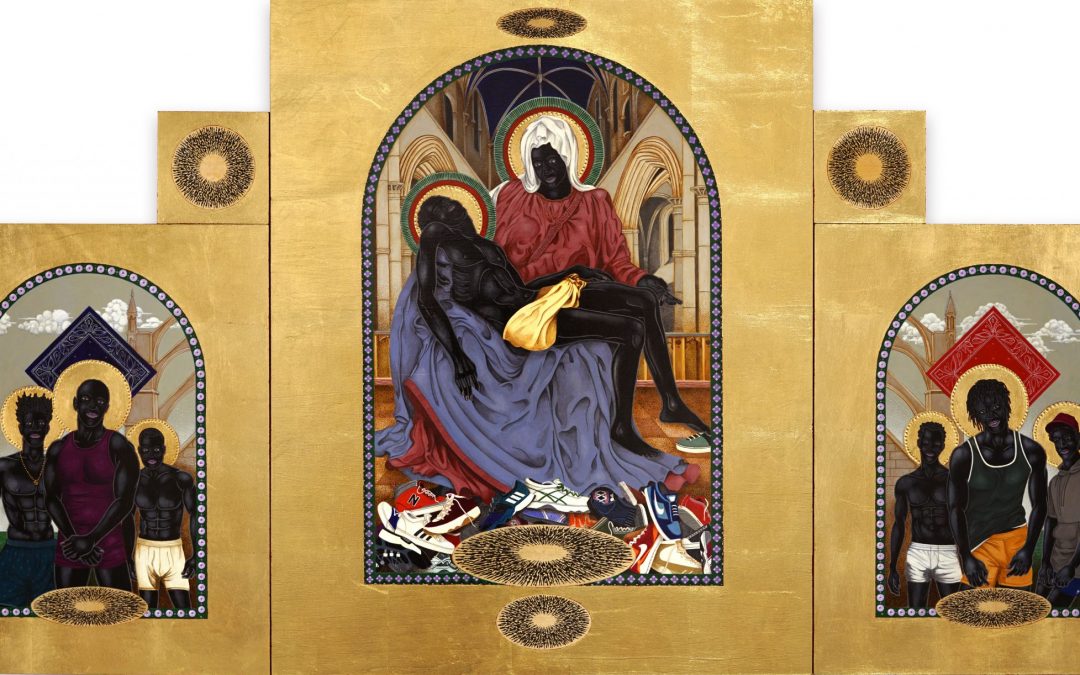 Few scenes are more familiar to a student of art history than the Madonna and Child, making it no small feat when a new rendition of that imagery manages to, well, astonish. In Black Madonna, Mark Steven Greenfield’s exhibition of new and recent works at William Turner Gallery, there’s little chance of confusing his works with those of, say, Da Vinci or Bellini. For one, Greenfield’s subjects are Black. For another, the innocuous, pastoral landscapes that serve as conventional backgrounds for Madonna and Child paintings have been swapped out in Greenfield’s series for what the artist dubs, “revenge fantasies.” 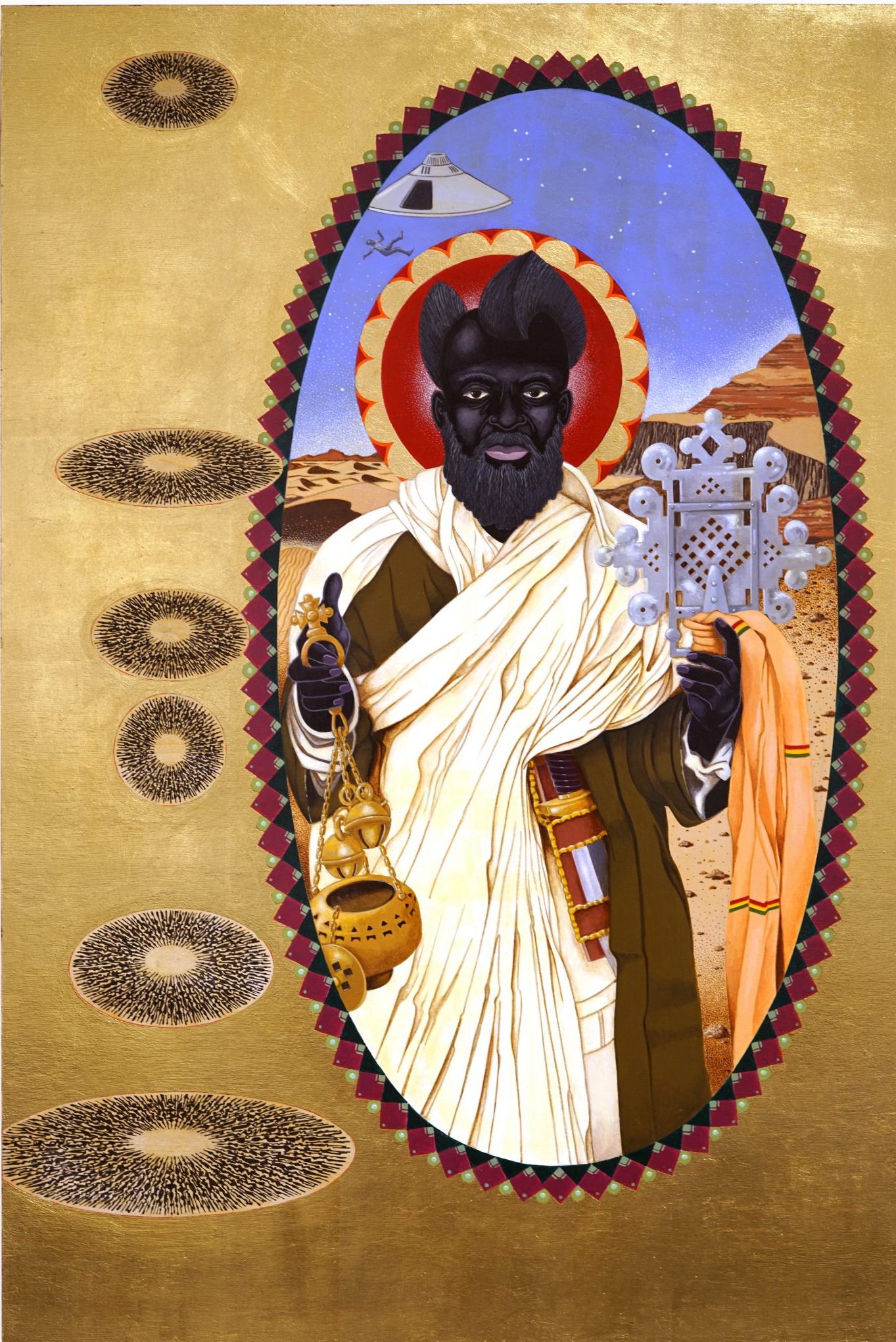 In a Zoom interview from his home, L.A.-based Greenfield, 69, frequently erupted into laughter—even if it’s immediately after rendering a dire verdict on the state of structural racism in America. Indeed, when asked whether recent Black Lives Matter protests and 24/7 media attention on police brutality infused his work with new meaning, the artist replied, “Quite frankly, if you’re Black in this country, you’ve understood this shit for a long time. There’s nothing new.” 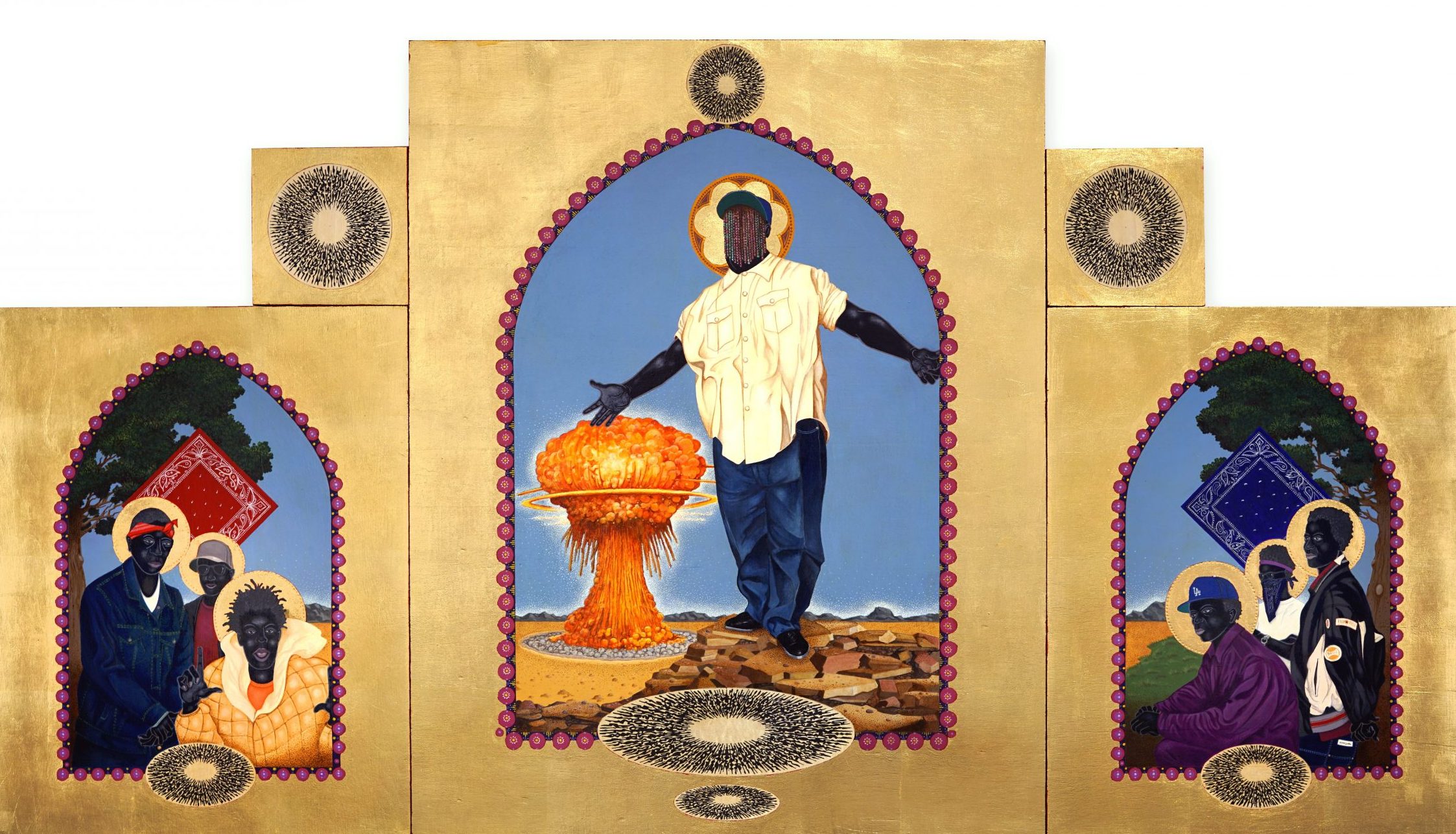 Greenfield, who was a graphic designer for the Los Angeles Police academy as well as the director of the Watts Towers Arts Center and the Los Angeles Municipal Art Gallery, teaches at Cal State Los Angeles, where he received a master of fine arts in 1987. He began the Madonna works years ago after returning from a residency in Brazil. While in South America, he participated in an Egungun ceremony on the island of Itaparica off the coast of Salvador, where he was locked in a room with some 250 people for more than 15 hours. “[That experience] was transformative,” he recalled. ”Believe me, I walked in there as a cynic, like, ‘Nothing’s going to touch me,’” adding that even though he’d been a lifelong practitioner of mantra-based meditation, “after the drum started, I was like, ‘I’m going to have to deal with this for how long?’ And then by the fourth or fifth hour, it’s, ‘Well, okay,’ and by the sixth hour, it’s, ‘Yeah, I’m digging this.’” 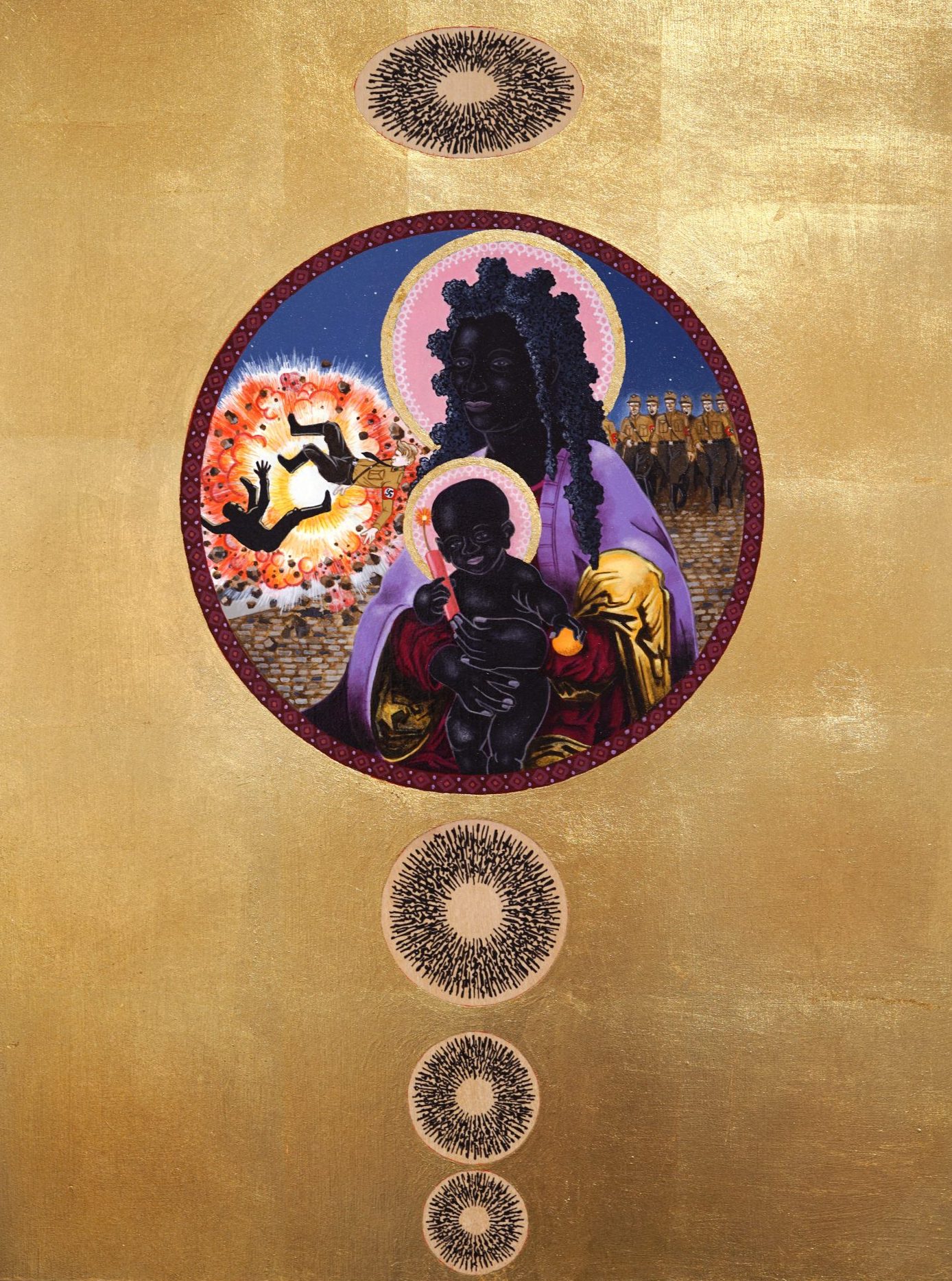 Greenfield’s meditative practice is evident in the abstract ovular discs drawn with ink that float above and below the tondos, the circular paintings which contain the Madonnas and other subjects. The paintings can be said to symbolize a journey into the mind’s subconscious, where fantasies of killing Ku Klux Klan members prove to be a response to the murders of Black people. But the discs also gesture at the possibility of unburdening the mind of such thoughts once they’ve been recognized. The ovals, which differ in shape and size, are decorated with glyphs, a recurring motif in Greenfield’s work. In the back room, four of his recent ink on Duralar drawings lend a monumental feel given the relative smallness of the constituent glyphs. Greenfield likens his artistic process to automatic writing, a technique employed in Freudian psychoanalysis, which is akin, explained Greenfield, to the trance-like state he achieves through meditation. 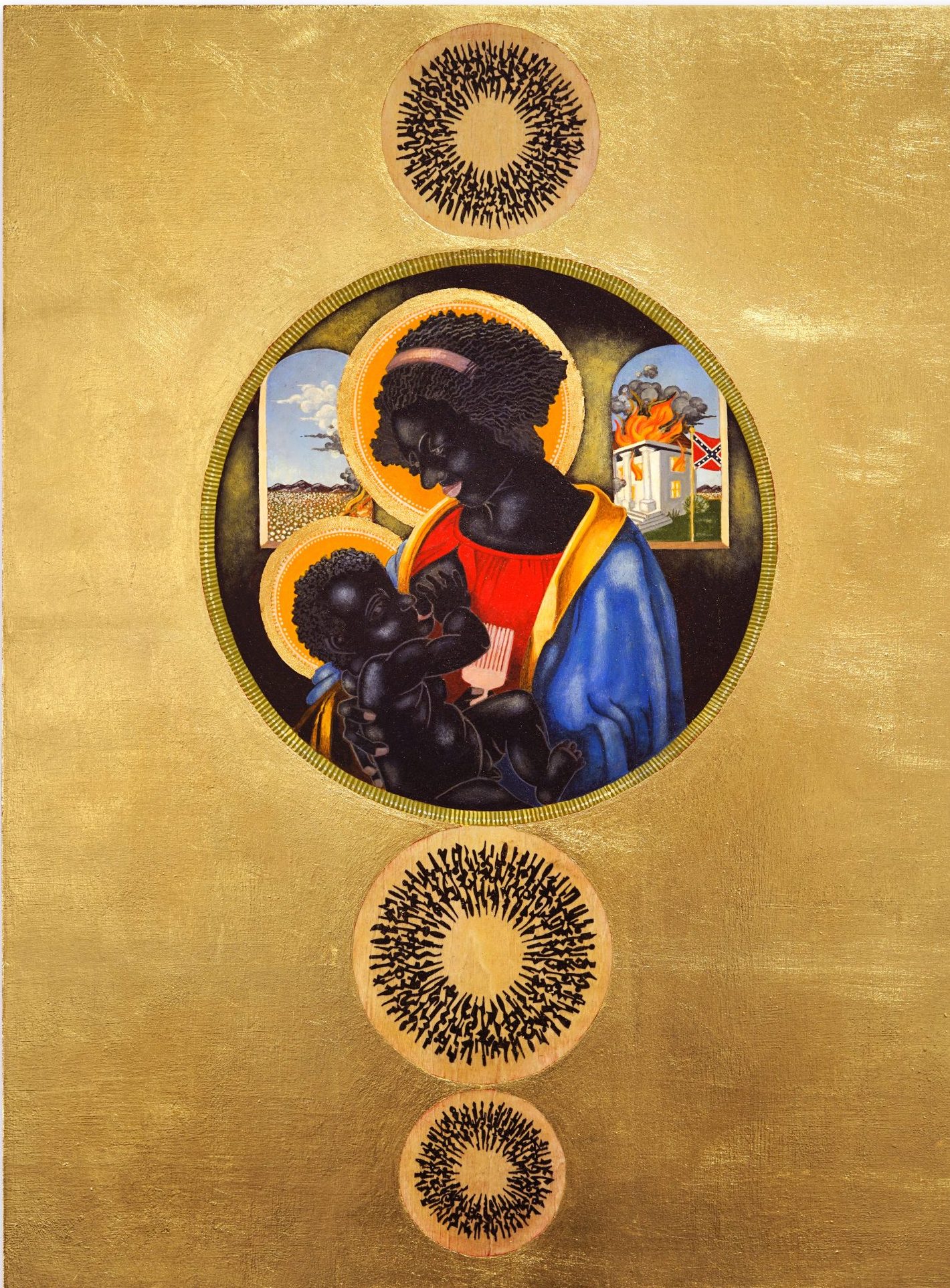 Burnin’ Down The House

Crop Circle features repeated glyphs that culminate in globular white shapes visible in cotton fields. “Yet,” said Greenfield, referring to the dark region in the drawing, “[it could be] a space of mystery,” before posing a series of questions he hopes viewers might entertain while considering that spot: What happened there? Why is that circle there? Is it somebody that’s fallen? Is it somebody who was stricken down? Is somebody dead there? What is there? This sense of mystery is primary to Greenfield’s thinking, as, according to one estimate, about 500 Black Madonnas from the medieval period have surfaced in churches across Europe, while scholars to this day have no agreed-upon explanation as to how or why they were made. But Greenfield is less interested in establishing definitive answers and more interested in the potential for curiosity. “Mystery scares a lot of people because they’re so attuned to wanting to know. For me, the explanation of these things is somewhat elusive because it changes from day to day based on how I perceive it at a particular time,” adding that his attraction to the unknown lies in the “feeling,” the “mental space,” of the enigmatic. 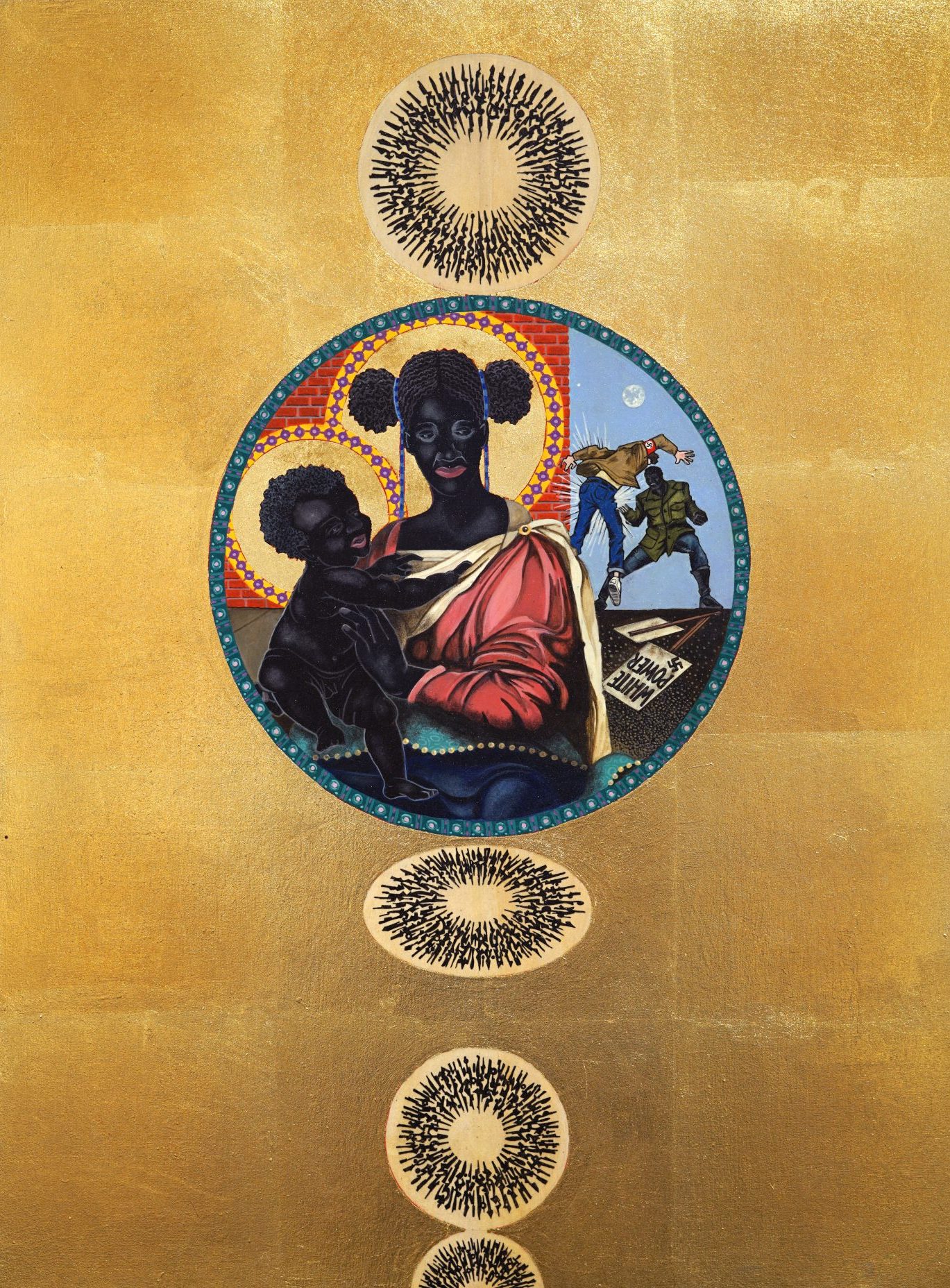 Nearly 20 years ago Greenfield unveiled a series of works with words arranged in the form of an eye chart that were superimposed on photos of minstrel performers. He sought to challenge the racist caricatures of African-Americans by both reminding viewers that this was a uniquely American art form while simultaneously depriving the images of their representative power. While that series focused on denaturalizing tropes, his current exhibition reflects what can be unearthed from embracing a mystery that seemingly lies at the heart of European art history. Thus did Greenfield go about reinventing stale civilizational narratives that art history has too often been called upon to service. “In a way, [this series] could be me subconsciously trying to get revenge for some of the art history classes I took [as an] undergraduate,” he explained. 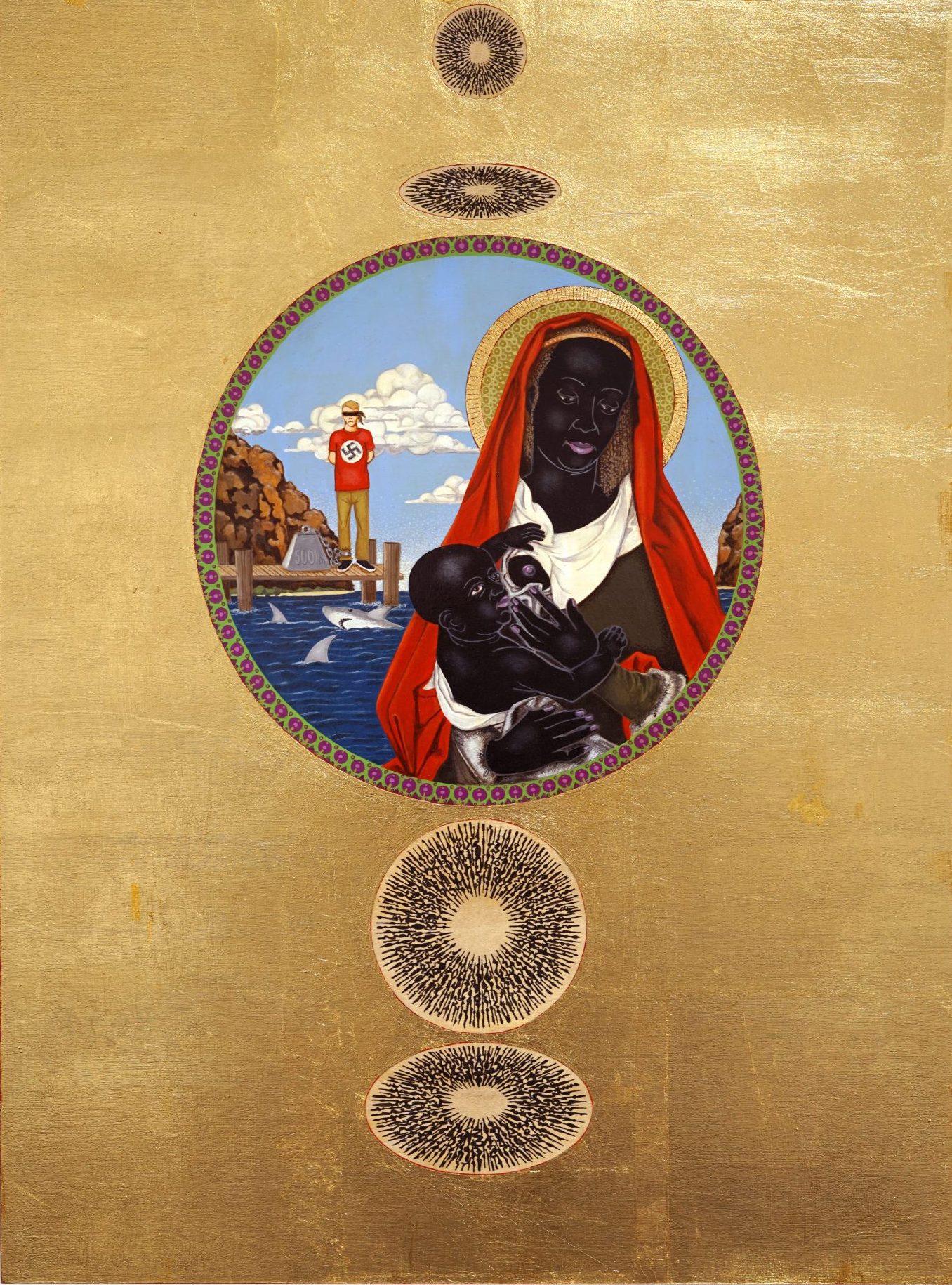 By subverting viewers’ expectations of looking at Catholic iconography, with biblical figures placed side-by-side spiritual traditions that would be considered heretical – or at least incongruous with the Church’s teachings – this becomes non-confrontational yet suggestive. Greenfield also makes use of juxtaposition by placing marginalized Black figures in tondos surrounded by gold leaf. This encourages viewers to question who deserves saintly recognition and who does not. Noted Greenfield: “There’s so many individuals that are revered in their own countries or in their own cultures, but because they don’t stack up to some of the standards that the Catholic church puts there, they’ve never really been recognized.” 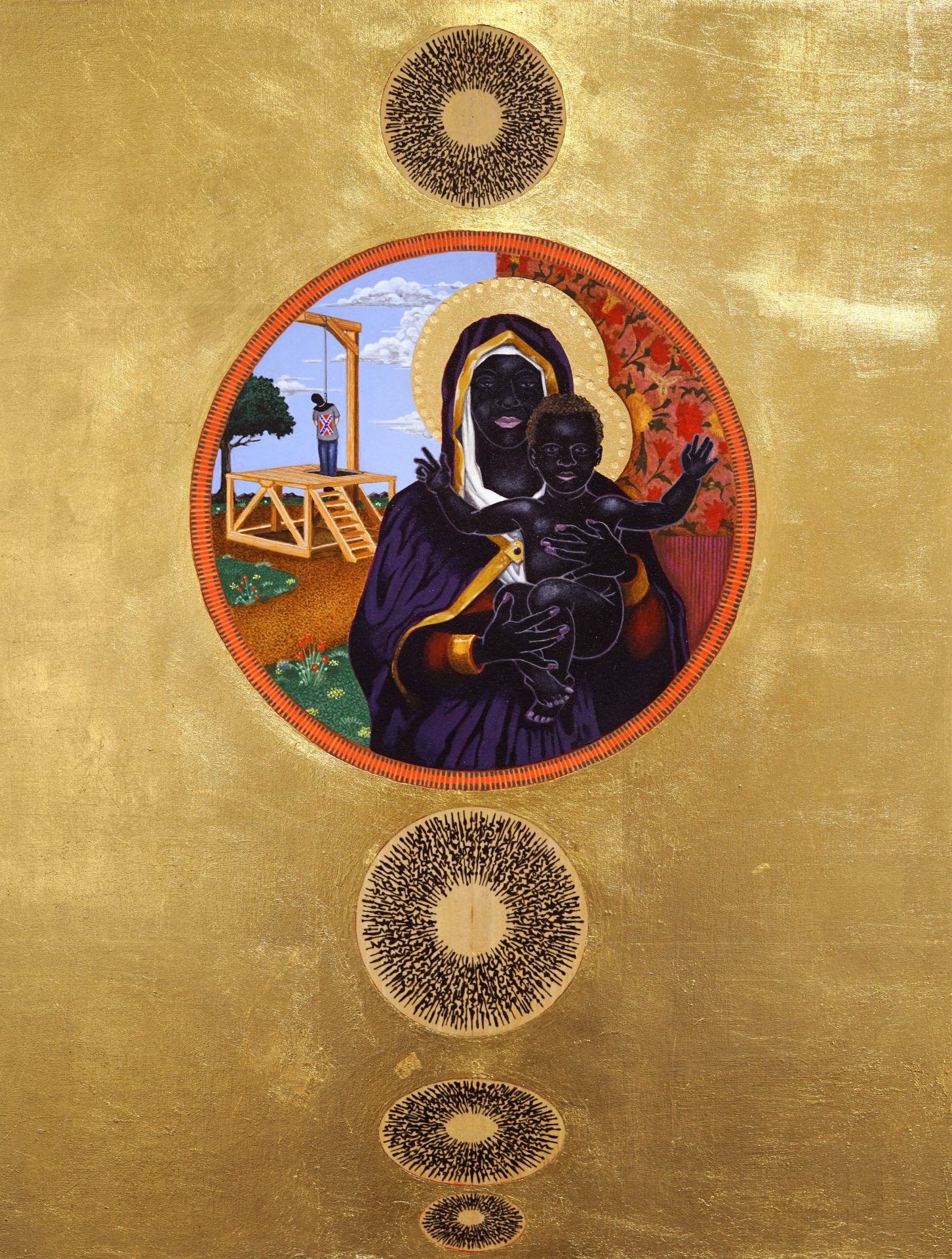 As to the reception of his art, Greenfield is more ambivalent, hoping that viewers will perhaps find themselves wondering about Saartjie Baartman, a South African Khoikhoi woman exhibited as a freak show attraction in the early 1800s, or St. Moses the Black, who renounced his past as a thief and murderer to lead a more saintly life. “There are certain parallels between [the latter] and myself,” explained the artist, “because when I was a teenager I was trying to get in as much trouble as I possibly could. The only reason that I’m probably not in prison is because they didn’t have enough evidence,” he added with a sly laugh. Greenfield also recognizes that there are limits to what he can accomplish in his paintings. “I don’t do the work for everybody. I don’t need to be understood.” 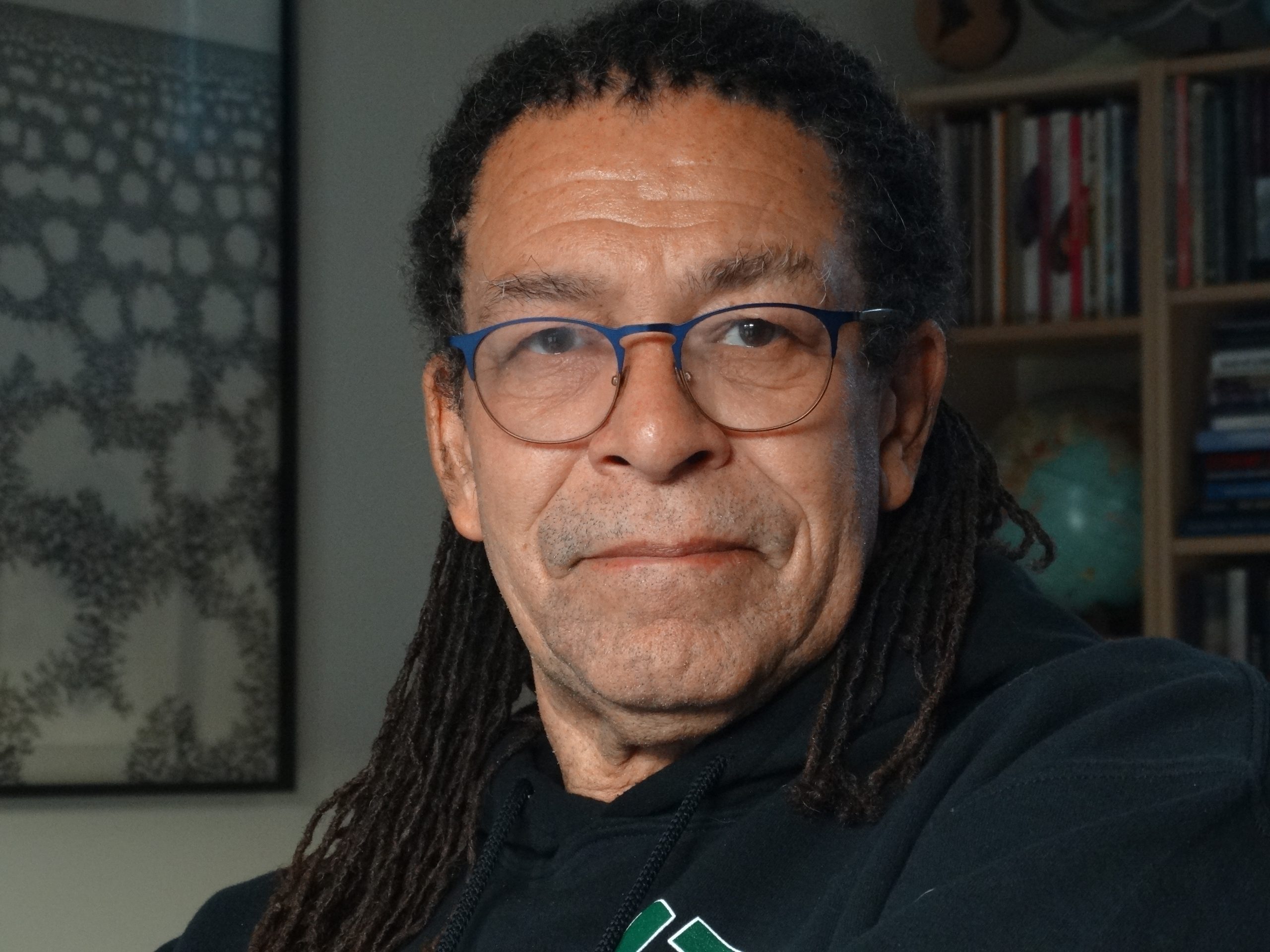 Still, Greenfield hopes to prompt conversations along the lines of, “What would happen if you found yourself in somebody else’s shoes? What does karma actually look like? Seeing that so many of these atrocities were perpetrated on African-Americans, what if you flipped the script on that? Would you feel that it’s justice? Would it cause you to rethink how African-Americans have been treated traditionally in this county?” Noting that buyers have told him that his works have stimulated dialogues they might not otherwise have had, Greenfield pointed out, “What I’m always curious about is that when people buy the work, where are they going to hang it?”

Jasmine Liu studies anthropology and mathematics at Stanford University, where she has been the desk editor, managing editor and chair of the editorial board of the Stanford Daily. She also writes art and literary criticism.