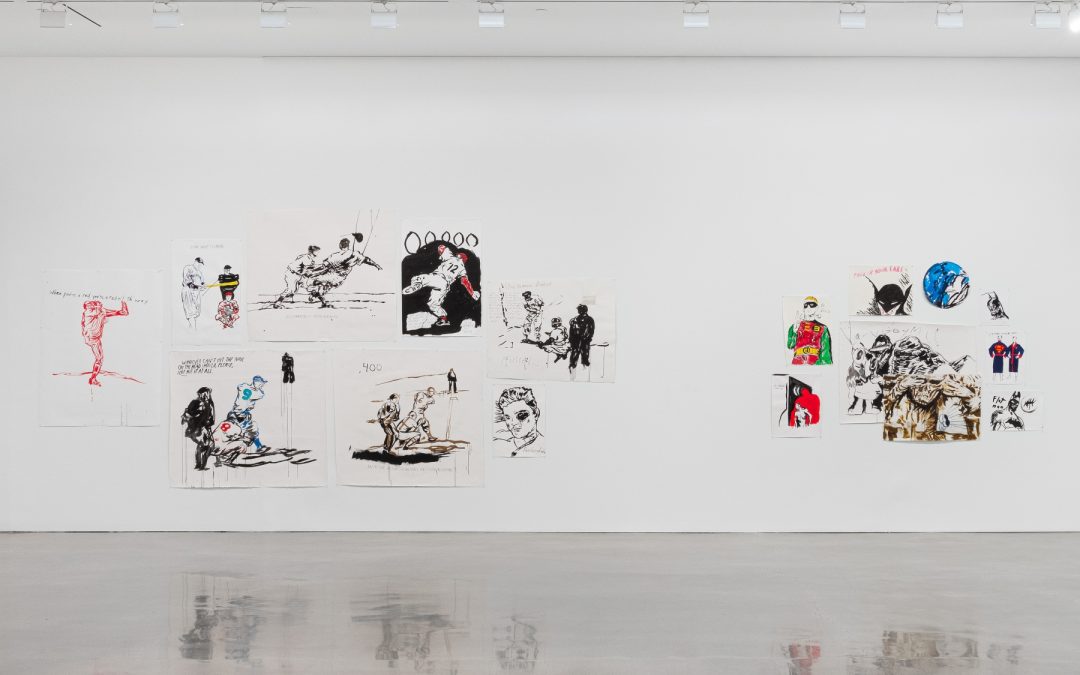 Raymond Pettibon has been covering gallery walls with his drawings for more than thirty years. He combines black ink outlines with colored fills to define people, places and things. These images are often juxtaposed with cryptic handwritten poetic or descriptive texts. His works on paper range in size from the intimate to the monumental and are often hung salon style, though arranged in specific groupings. At Regen Projects, the works are separated according to themes including baseball, Gumby, superheroes, gangsters, animals and surfers on ocean waves. While the majority of images are clustered by subject, three large-scale wave drawings are presented alone in the center of their walls functioning like pauses or punctuation between the other motifs. 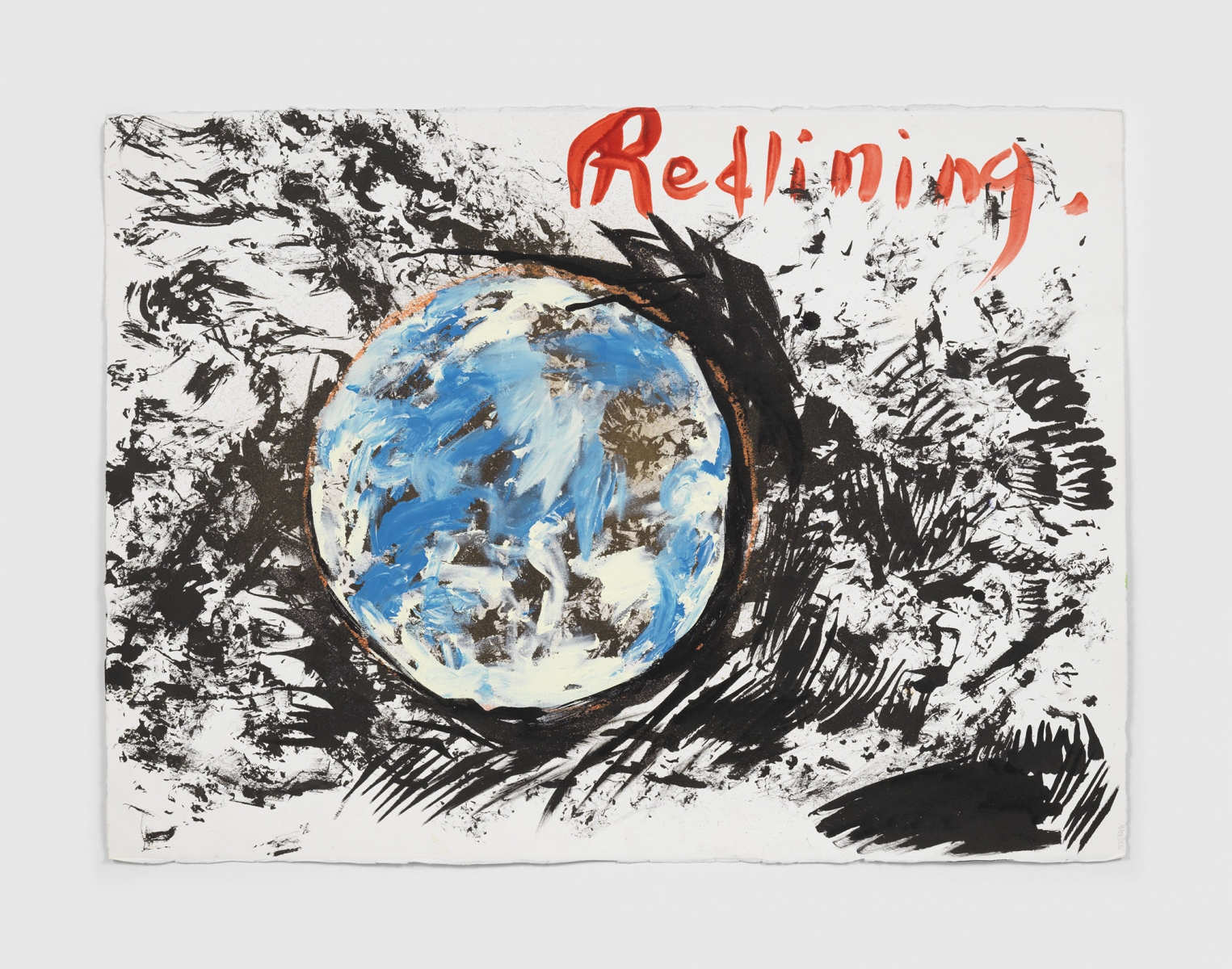 To take in a Pettibon exhibition requires reading as well as looking because in each work, what is written is as important as what is depicted and a fleeting glance will never reveal Pettibon’s underlying ironic humor and allusions. His installations unfold as narratives in which the individual works build upon each other to create meaning. A portrait of Gumby with X’ed out eyes reads, “cancel the fake world,” a clear commentary on Trump‘s rants about ‘fake news.’ A particularly haunting work features a large black rectangle topped with an urban skyline reminiscent of downtown New York pre 9-11. Under the black void, Pettibon has written “One Tower.” 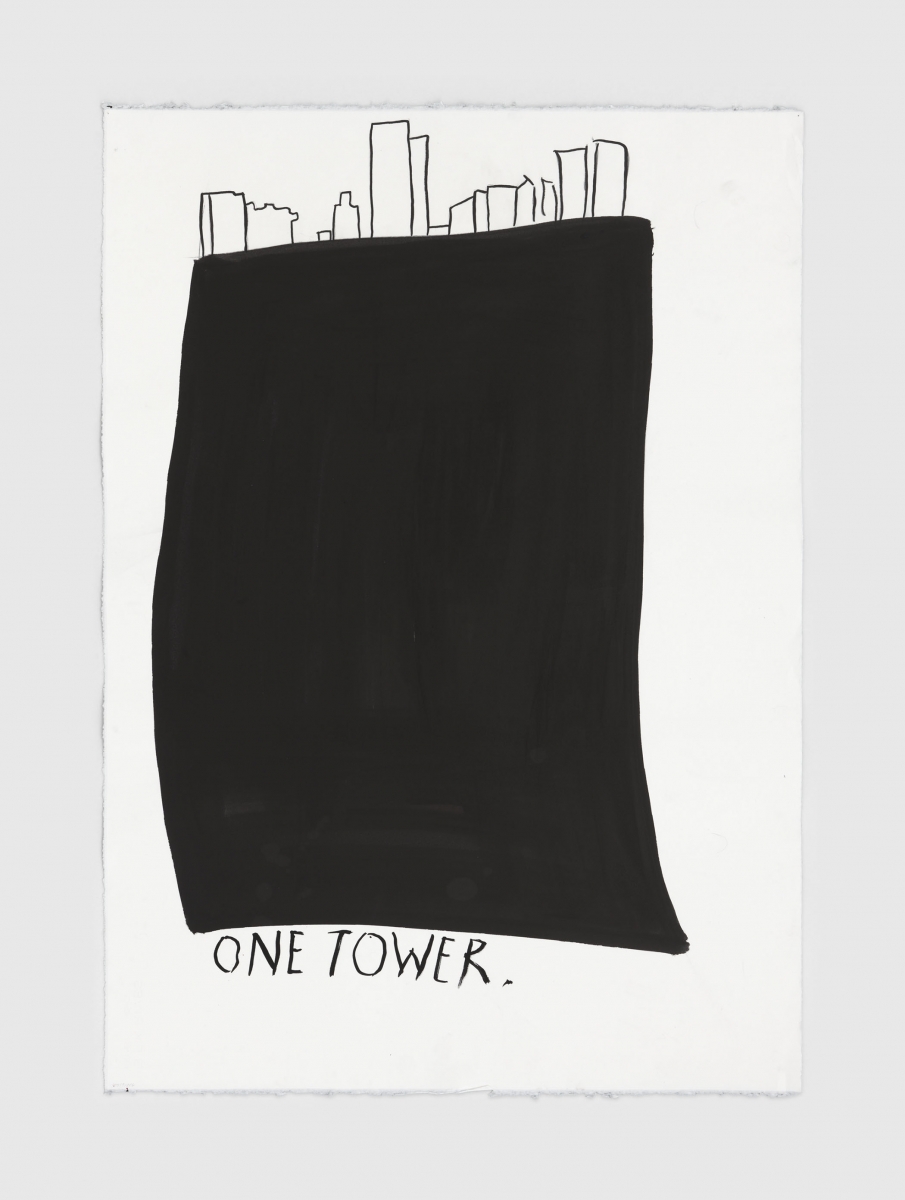 While many pieces are bombastic commentaries about the state of the world, Pettibon is not without humor. A drawing of a pointy-eared batman reads, “prick up your ears” while an image of an open books states, “the pages are blank.” Pettibon has a casual drawing and painting style, though some of the works are beautifully rendered outlines, while others fill the paper with color. Most feel like illustrations of dream-like thoughts or spontaneous ideas that want to be recorded and remembered. 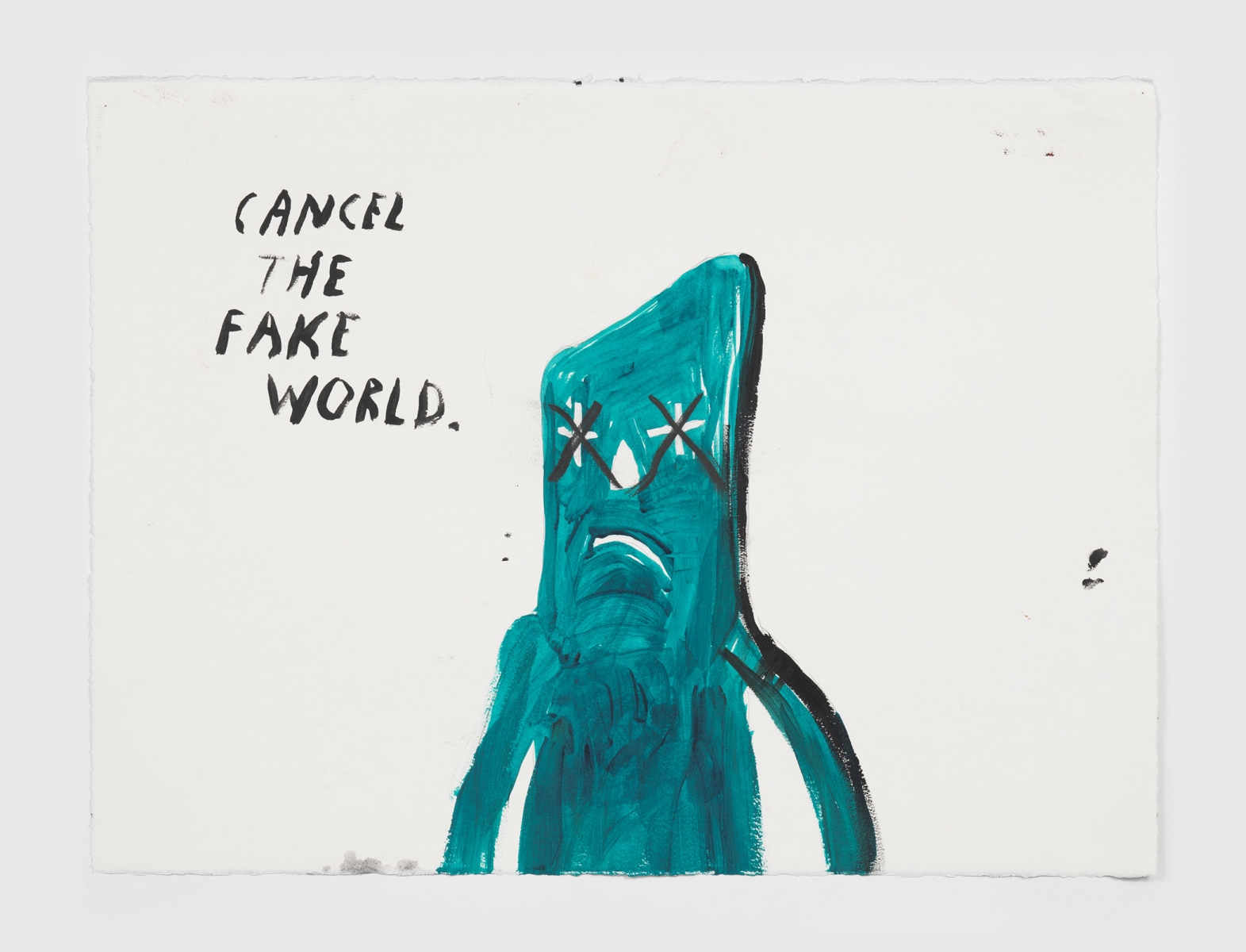 No Title (Cancel the fake)

Pettibon’s range is remarkable and the breadth of subjects within any exhibition is far-reaching. Surfers may gravitate to the images of giant cascading waves like Str8 Line (all works 2020), Making a wave, The Clear-cut brow, while movie lovers might be wowed by Nancy Regen playing, an image of a woman’s red high-heeled shoes and mustard colored skirt with the text “Nancy Regen playing Judy Garland.” Sports fans might like When you’re a, a red drawing of a pitcher ready to throw the ball that reads “When you’re a red you’re a red all th’ way.” 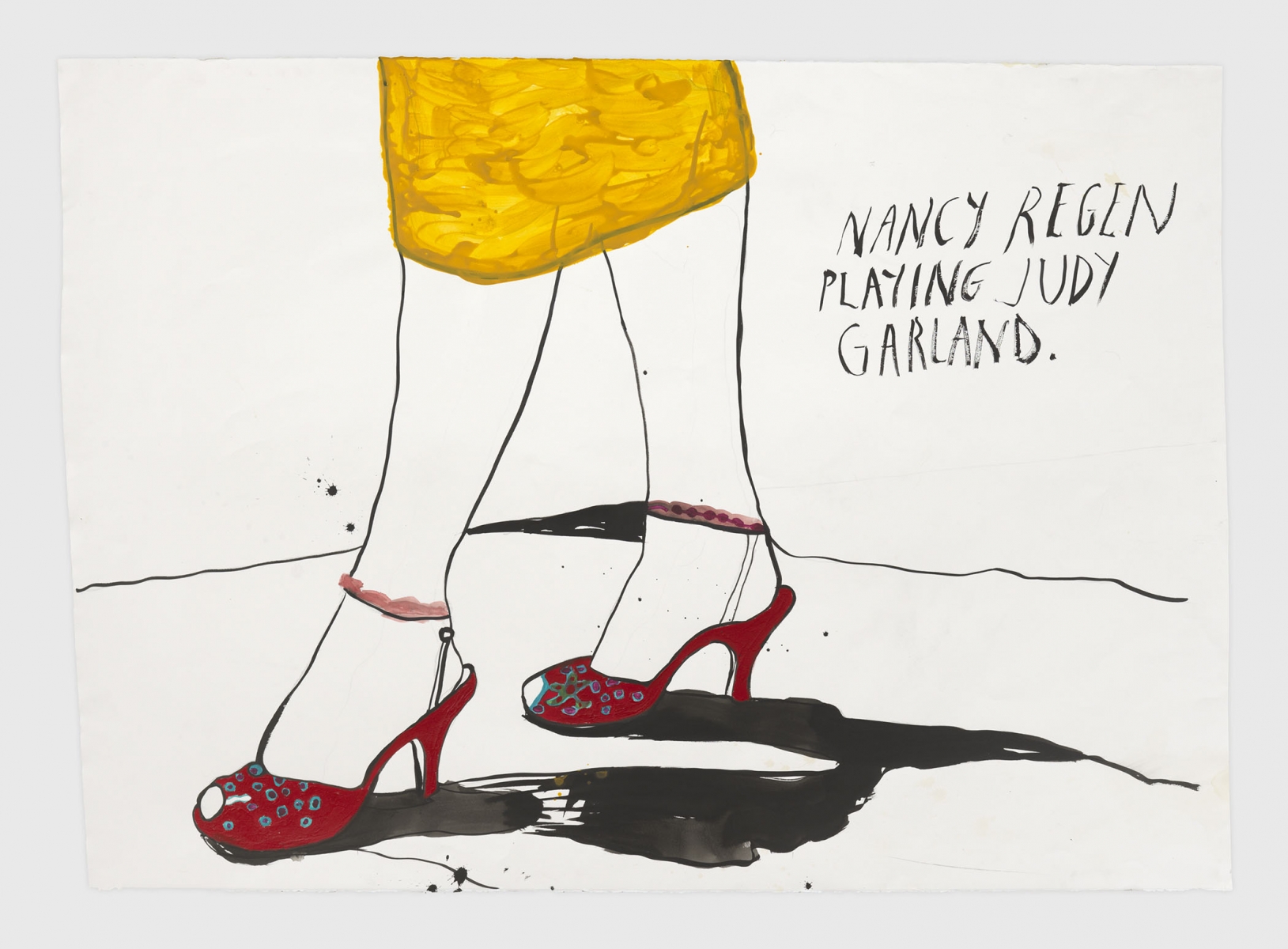 Many of Pettibon’s works are self-referential or acknowledge the creative process. i’m aware says just that while For the squares is an ink drawing of enlarged crosshatching with the words “for the squares: my homage to the crosshatch and the grid.” Fluff is a blur of blue brushstrokes that transition from light to dark across the composition. The wall of animal works is more melancholic with drawings such as My Russian Lapdoyd— a portrait of a longhaired dog with a bright red tongue, as well as three large race horse drawings. 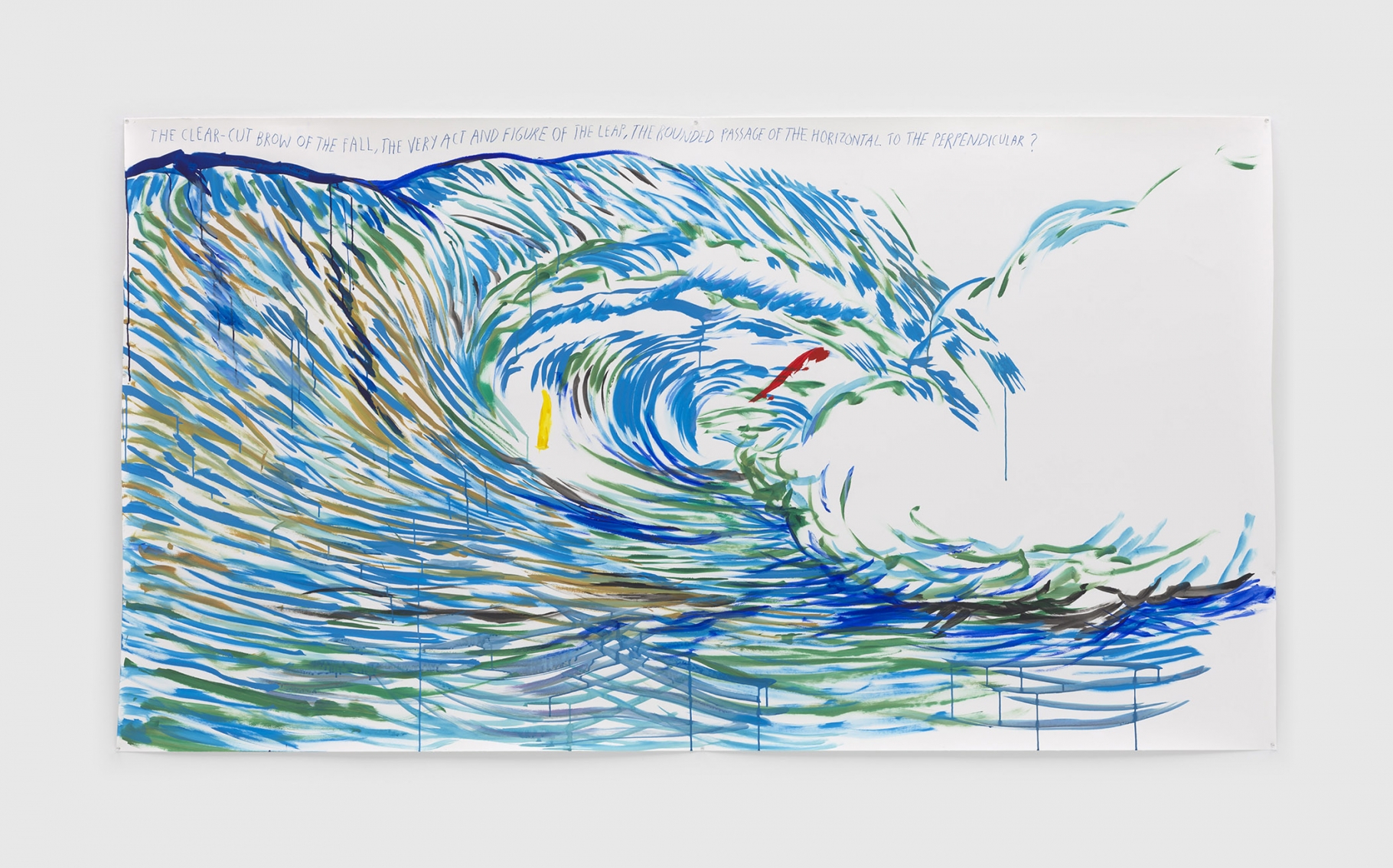 No Title (The Clear-cut brow) 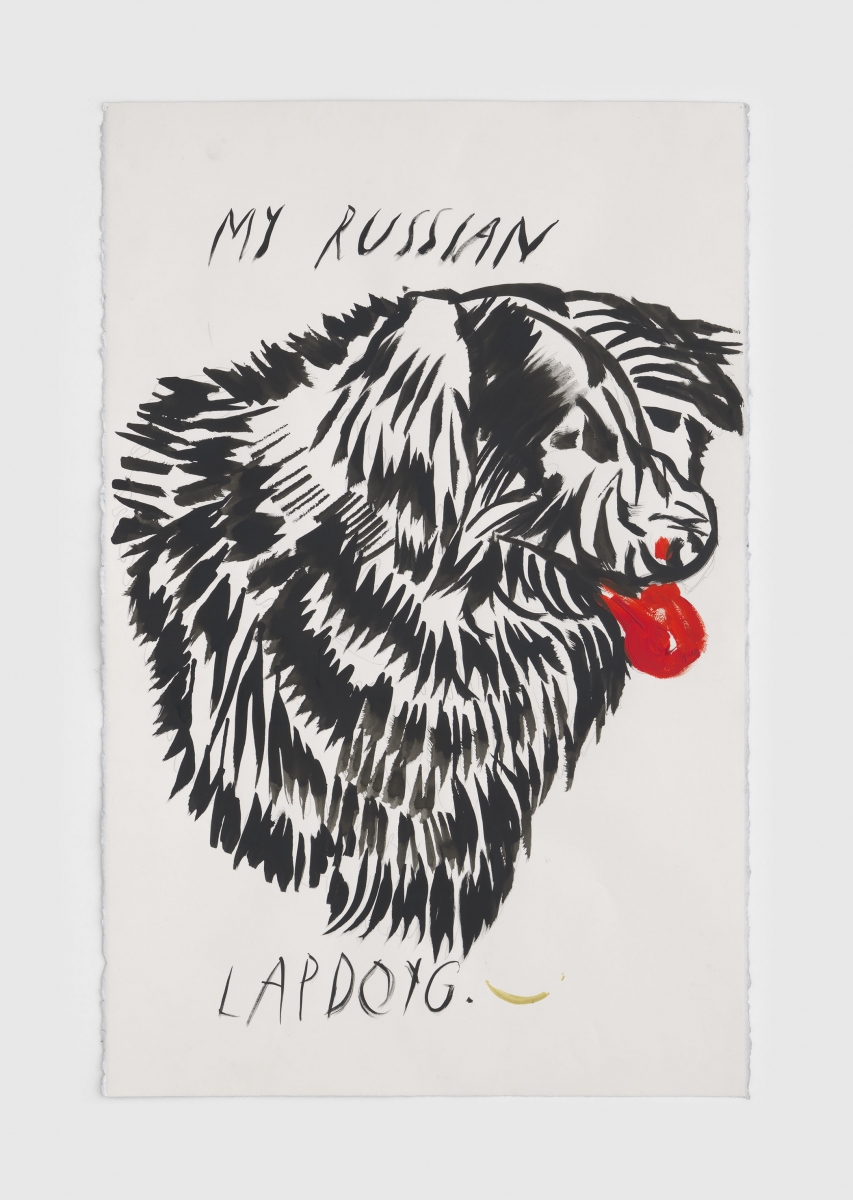