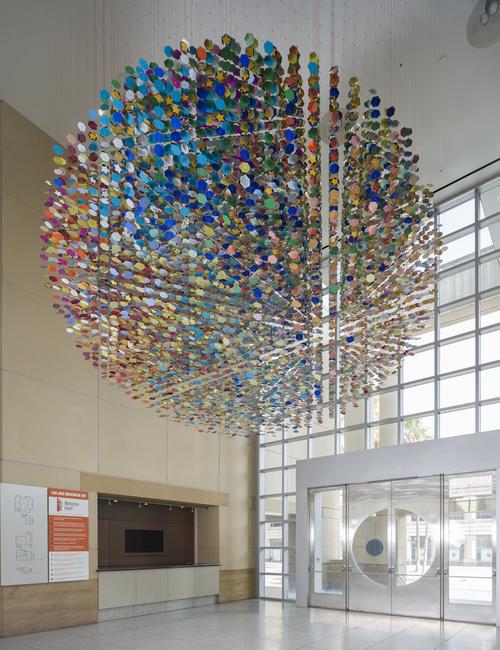 The San José Museum of Art (SJMA) announced a new commission by California artist Pae White. Commissioned to usher in the next 50 years of creative impact at SJMA, this new work will soar within the Museum’s thirty-foot high atrium and greet audiences. This site-specific work will be the artist’s second largest mobile completed to date and the most ambitious commission in SJMA’s history. Unveiled in September 2020, Noisy Blushes will be on view through the building’s glass façade until the Museum re-opens to the public. This will be White’s first public artwork at a cultural institution on the West Coast to be on long-term view.

In creating her colorful and dazzling mobiles, White looks to the natural world—flocks of birds, schools of fish, drifting clouds—to produce sculptures without volume, to find order within chaos, and to meditate on movement and time. With this commission, White celebrates the mundane, the overlooked, and the ephemeral with a glittering, shape-shifting orb that will deliver a sublime experience for visitors and transform the Museum’s entrance into a new place for art.

For SJMA, White has created a sphere composed of over 12,000 silkscreened, electroplated stainless-steel hexagonal disks and suspended from over 500 hundred cables that float behind a towering glass façade. Her mesmerizing mobile will scatter millions of reflections throughout the Museum’s spacious Harold Witkin Convocation Area and Frank L. and Edna E. Di Napoli Skybridge Gallery. The colors of the mobile—hot pink, coral, crimson, turquoise, fuchsia, sea green, periwinkle, and more—sweep through the sculpture through an effect White calls a “blush.” Hues of gold, silver, and rose dominate, acknowledging the entwined histories of quicksilver mining in the town of New Almaden in south San José and the California Gold Rush of the High Sierras.

“Pae White’s bold new commission mirrors SJMA’s commitment to experimentation and innovation and reminds us how great art transcends the immediate events of its time. We are thrilled that this will be the first thing visitors will see when SJMA can reopen,” said S. Sayre Batton, Oshman Executive Director, San José Museum of Art. “White has worked closely with SJMA curator, Rory Padeken, and Richard Karson, director of design and the exhibitions team, to realize this artwork. We are grateful to them for this collaboration as well as the 120 members of the Bay Area community who generously supported this project.”

SJMA presented a selection of new and recent artworks by Pae White as part of its exhibition series, Beta Space, from July 2019 to January 2020. Plans for the commission began in 2017 and developed concurrently with the exhibition, which included a smaller mobile as proof of concept for the larger sculpture in the atrium. The mobile is site-specific and created by White to work within a space that connects SJMA’s nineteenth-century historic wing with its modern addition and offers multiple points of view from below and from above. White also riffs on Conceptual art and Minimalist artist Sol LeWitt by incorporating a few miniaturized versions of his large-scale, geometric wall drawings with designs of her own making into the piece. “Over the years, White has increasingly relied on the use of custom software along with designers, fabricators, artisans, and craftspeople from around the world, maximizing their expertise to create her art.” said Rory Padeken, curator, San José Museum of Art. “This method of working is quite commonplace in Silicon Valley where innovation is driven by creativity as a shared value that transcends disciplines and industries. With this artwork, White elegantly merges sophisticated technologies with inventive processes and the effect is ravishing.”

Pae White shared, “Noisy Blushes embraces visual ambiguity. A site-specific artwork, it simultaneously reflects light and color, yet denies its material presence: although viewable from a multitude of angles, its essence remains fugitive, ever changing depending upon the viewer location, the time of day, even the time of year. I am interested in the play between massiveness and transience, the elusivity of form.”