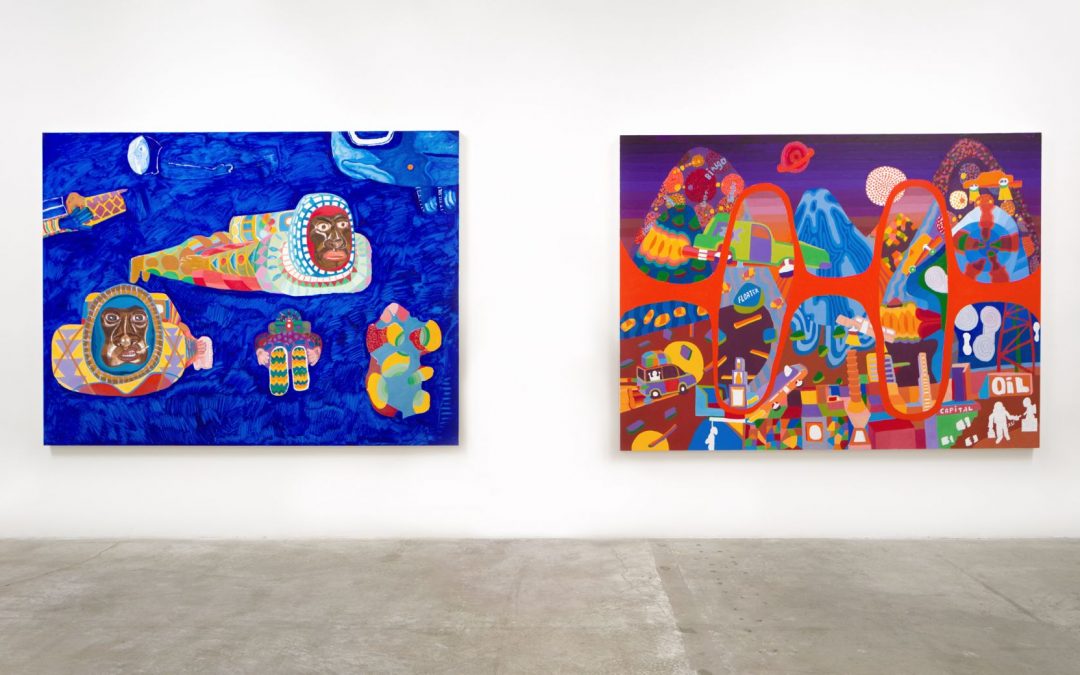 Peter Williams is an African-American artist whose exemplary career spans more than forty years. While teaching at the University of Delaware for fifteen years, though he is now retired, and before that at Wayne State University for seventeen, he also exhibited extensively. Williams paints both figuratively and abstractly, focusing on formal qualities like color, pattern and paint application, as well as on content that stems from current events and includes topics like racial discrimination and climate change. 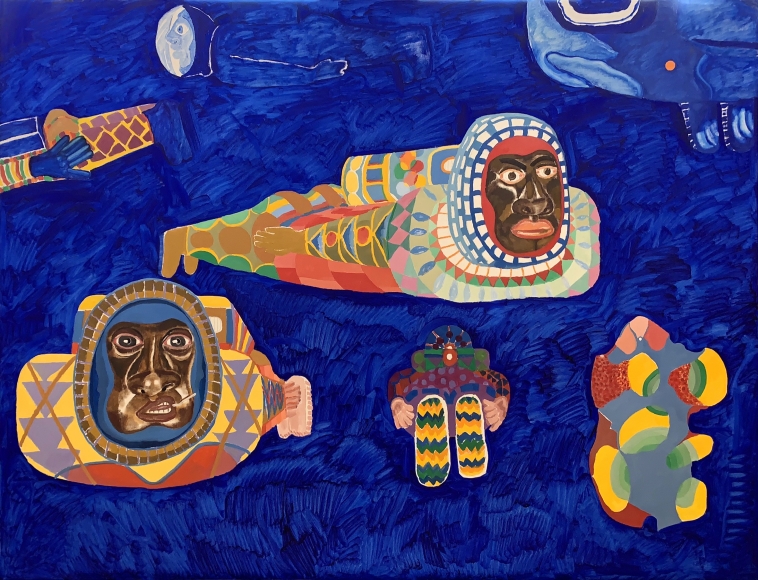 He Was a Global Traveler

In his exhibition Black Universe (a concurrent exhibition of related works is on view at Museum of Contemporary Art Detroit), he presents a series of paintings that are informed by a fantastic narrative about a journey to outer space in search of a better world. Williams depicts the adventures of dark-skinned astronauts —whose uniforms identify them as part of ‘NABA’— floating through space as well as on new planets. The paintings incorporate various styles and use familiar corporate trademarks like FedEx and the Nike swoosh. While they may inspire viewers to laugh, they are also critiques that touch on more serious issues. Without a doubt, the paintings on view are an impressive body of work: They are large, colorful and jam-packed; as one looks longer and deeper, more is revealed. 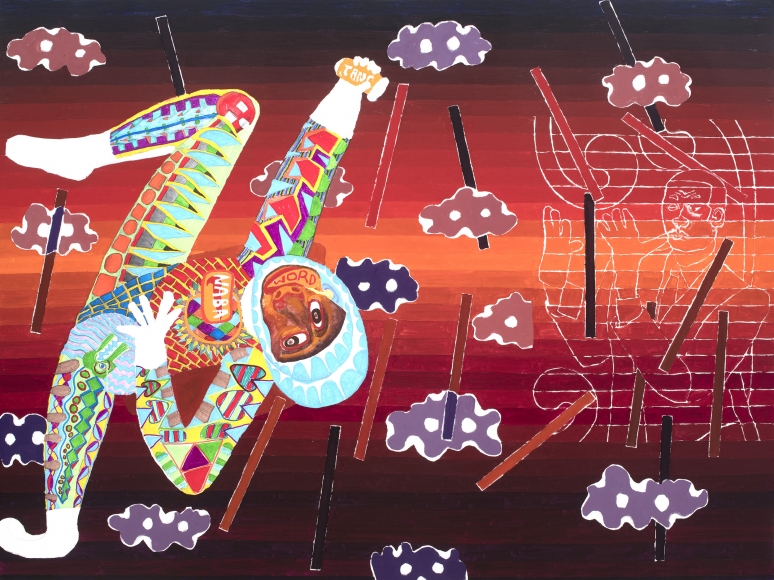 The astronauts who glide through deep blue space —represented as a background made up of short gestural brush strokes in DNA, 2020— are pictured from multiple angles drifting forward and back. While their body positions and decorative space suits are reminiscent of Egyptian sarcophagi, these figures are very much alive. Their expressive faces exhibit both a sense of intensity and determination, perhaps an indicator of the unknown that awaits them in the new world. A limber astronaut dances to the music only he can discern in All that Jazz and passes by abstractly rendered planets, satellites and clouds, as well as through an ambiguous double helix in On the Way (both 2019). In these images, Williams does not paint in the astronaut’s gloved hands or booties but rather leaves them untouched to exaggerate the way the white canvas contrasts with the more colorful striated background behind. Like in DNA, the astronauts’ space suits are more stylized than realistic or functional, but here their facial expressions are more dazed and confused. 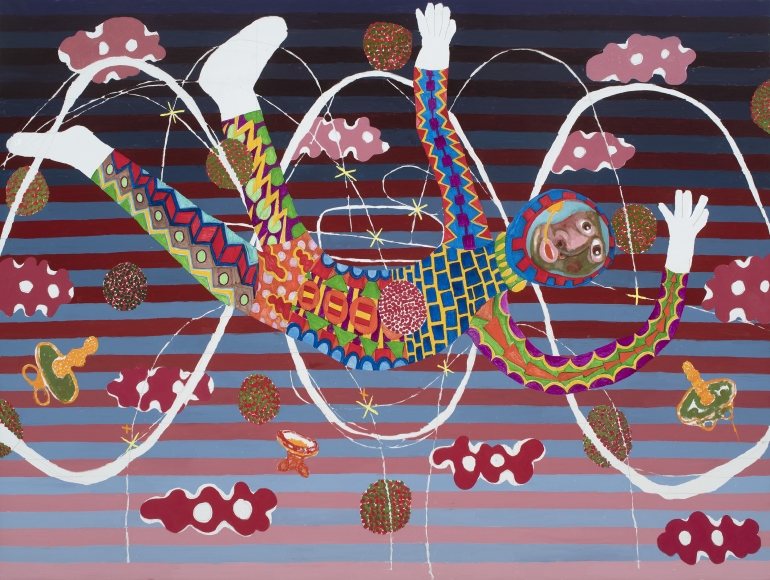 Where the astronauts are going, what happens to them when they arrive, as well as what becomes of what they left behind is alluded to in many of Williams’ more scenic paintings. Traditionally, goggles are put on for protection and in the painting Goggles, 2019, Williams illustrates what is seen outside as well as through the lens. It is hard to discern if the view through the goggles is better or worse than what surrounds their rust colored frames. Cars criss-cross the densely packed composition where abstract shapes coalesce to form mountains and buildings. Planets and stars can be seen in the sky as well as two newly arrived astronauts yet to be filled in with color. Words dot many of Williams’ images and in this work, they include FedEx, Oil, Capital, Bingo and Floater. A floater is a dark shadowy spot in one’s vision. They are harmless but can be annoying. The fact that Williams includes the word Floater in the middle of the work as seen through the goggles may be both a commentary on age and a warning about the inaccuracies of vision. 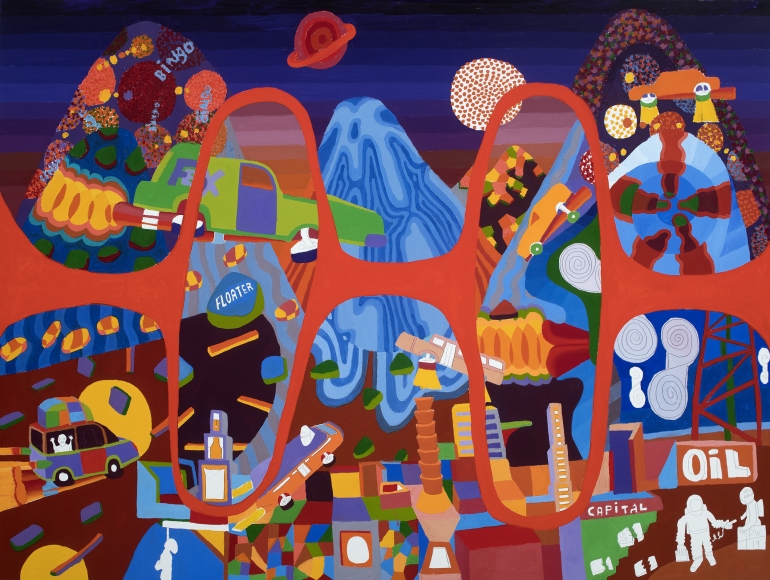 Control Room, 2019, is a chaotic painting filled with disembodied, head-set wearing figures that seem to be in control of the path of three ‘NABA’ astronauts, one who has the letters BLM on the arm of his bright green uniform. The astronauts are sailing an unpainted (raw canvas) boat with wheels, decorated with intricate pencil markings, rather than commandeering a traditional spaceship. They appear to float above the planet and are depicted within a red, pock marked sky filled with purple amoeba-like shapes that could be clouds or technological remnants. Below them is the control room where a crowd of onlookers has gathered. The only dark-skinned man among them seems to be in charge, uttering the word WHipipo!. 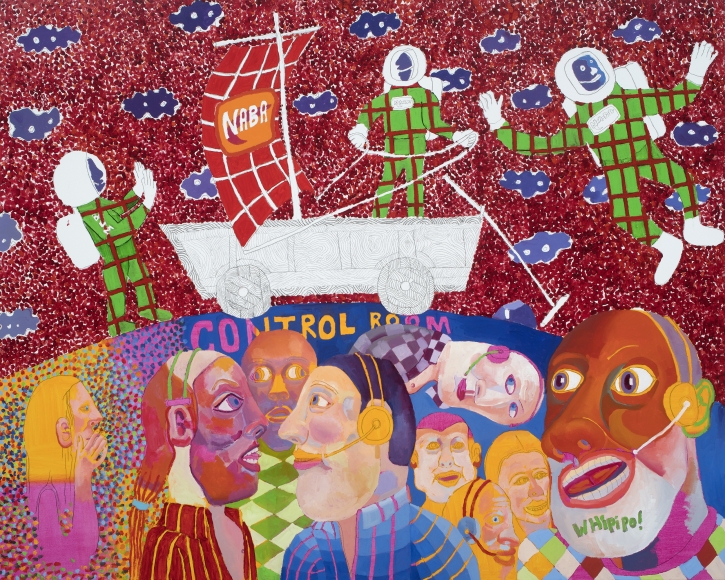 Many of Williams’ paintings recall aspects of other artists’ styles. There is a Guston-esque head in Mortal Ice, 2020 and flowers with faces that resemble those by Takashi Murakami in Romulus and Uncle Remus, 2019. Figures akin to those painted by Picasso also make an appearance. Williams draws freely from myriad sources to create paintings that are packed from edge to edge with a range of compelling fragments. The works are purposely funky. While portions of each painting are realistically rendered, aspects of each canvas are also left unpainted or partially finished. Williams combines different styles ranging from illustrative to cartoony and making works that are amalgamations. While he is a skilled painter, Williams allows for a certain casualness in his depictions. He imbues these works with a social and political consciousness while offering subtle cultural critiques that are not undermined by painting style. The underlying message of Williams’ narratives speaks to our urgent need for change.