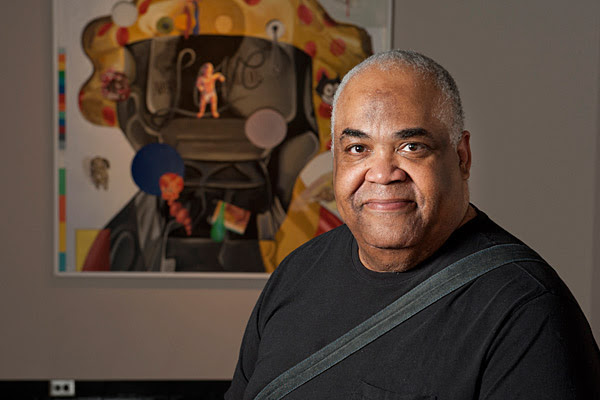 The Artist Award is an unrestricted merit award of $25,000 given annually to a painter or sculptor who has made significant contributions to their field and whose work shows evidence of the hand.

“I am deeply honored to be a recipient of this distinguished award,” says Williams. “It is the validation of 40 years of work, representing People of Color in my art. My interest in Black culture stretches back to Africa and its culture, and to Afro-futurism in my latest body of work.”

For more than four decades, Peter Williams has created artworks that explore contemporary culture, slavery, racism, police brutality, incarceration, environmentalism, and voyeurism through an approachable visual style. His paintings encourage the viewer to look deeply at the canvas for clues and insight about the Black experience. For example, pattern and distortion represent the conditions and circumstances that disrupt Black lives. Defying categorization, his painting style incorporates varying levels of abstraction, figuration, narrative, and iconographic elements. He draws inspiration from posters, comics, and the vibrant colors of city life.

“Most people don’t have any kind of dialogue with the work of 500 years ago or even 100 years ago. So, I’m trying to talk in the language that’s available to most people. We live in a comic universe right now. I’m trying to be subversive by saying underneath all this humor is something we’d better start paying attention to. And I’m using the signs and symbols and signifiers that I learned from the Western tradition of oil painting,” notes Williams.

Williams’ recent series include Afro-futurist narratives about a superhero named “The N Word” as well as a group of African American colonists who leave Earth due to impending environmental catastrophe. In both, Williams uses dazzling patterns and imagery to guide the viewer on a journey rife with art historical and pop culture references, satire, and creativity. Paintings from the Black Exodus series are now on view in a three-venue exhibition at Luis De Jesus Los Angeles, Museum of Contemporary Art Detroit, and Trinosophes (Detroit).

Williams’ earlier paintings include images of Aunt Jemima, Mickey Mouse, and SpongeBob SquarePants as a way of talking about racial stereotypes and their effect on American culture. His experiences in the Southwest, where he studied at the University of New Mexico in Albuquerque in the early 1970s, inspired a series of paintings about Black cowboys.

Throughout his career, Williams has created work that reflects a deep understanding of art history. Recent paintings reference abstraction, minimalism, and pointillism, while older works use classical painting compositions as allegorical framing devices. Williams’ paintings have been linked to the works of Romare Bearden, Jacob Lawrence, Jean-Antoine Watteau, and Pablo Picasso, among others.

Williams has taught at universities since 1989 and has influenced generations of artists as a teacher and mentor. He taught as an associate professor at Wayne State University in Detroit for 17 years before accepting a position as a senior professor of painting at the University of Delaware in Wilmington, where he recently retired after 15 years.