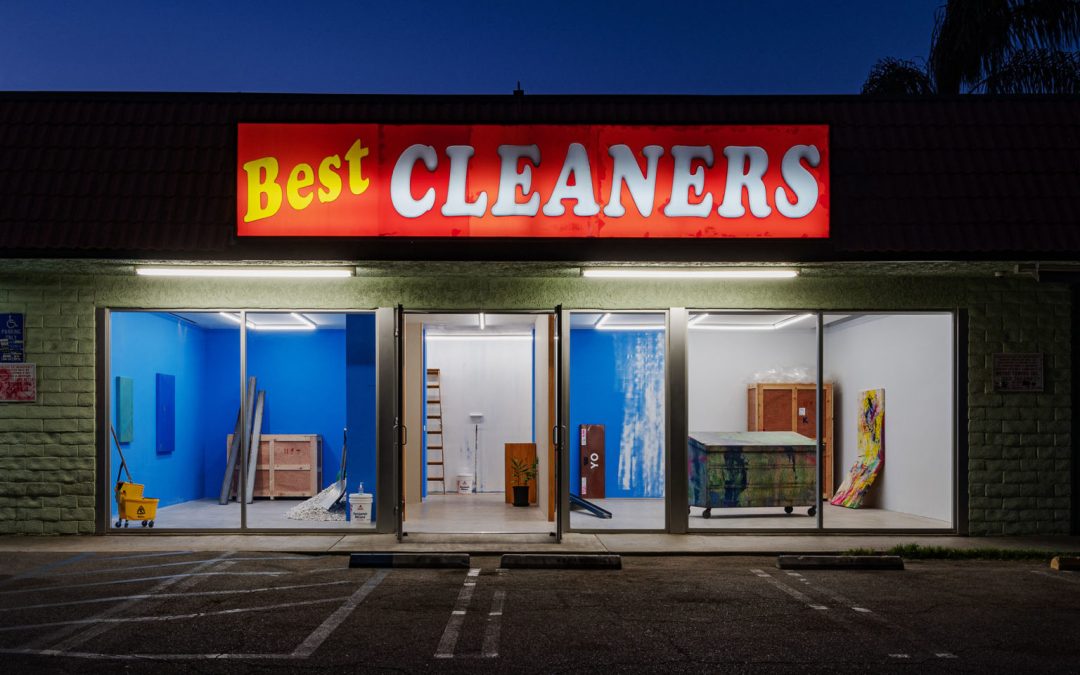 The spring exhibition at Nonaka-Hill was a mixed media installation by the Japanese artist Sofu Teshigahara (1900-1979). As they often do, the gallerists enhanced the space by painting the walls a vivid sky blue and by creating a rock garden into which Teshigahara’s sculptures were strategically placed. The gallery faces a parking lot and has large glass windows which allow the exhibitions to be seen from both inside and outside the space. Teshigahara’s installation offered a peaceful oasis in contrast to the bustling boulevard and strip mall surroundings. Some of this remains as the setting for Kaz Oshiro‘s subsequent installation, although a feeling of disarray and unrest has replaced the aura of calm. 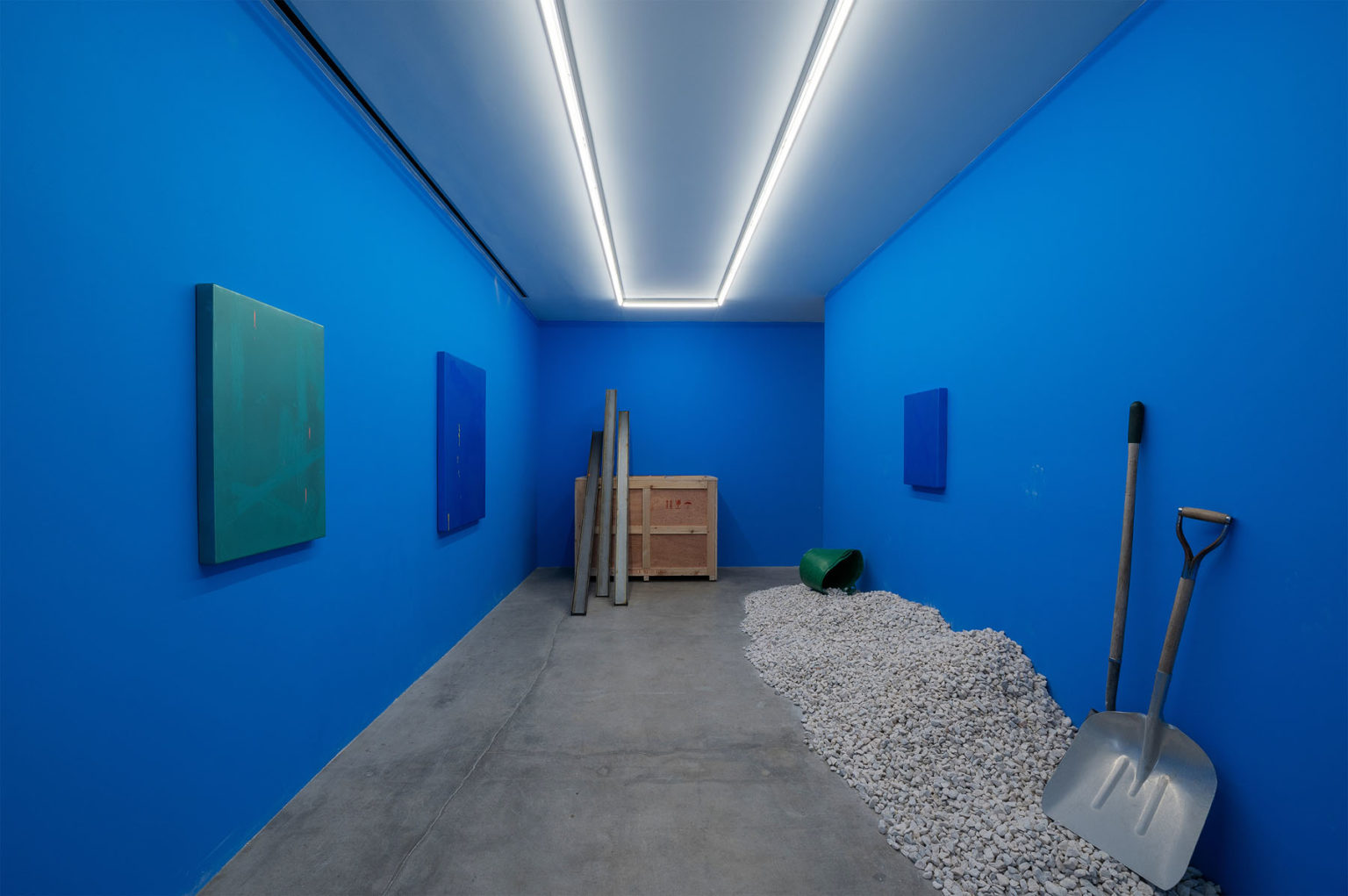 The pandemic and current charged political climate has put people on edge and blanketed the world with unease. Oshiro and Nonaka Hill Gallery take this uncertainty and use it as a point of departure. Rather than present Oshiro’s works (selected pieces spanning 2003 – 2020) traditionally — as individual objects placed on white walls or strategically positioned on the floor, in a pristine gallery — the space appears to be in flux. Half the walls remain blue from the previous exhibition, while some are now white and others look like they are still in the process of being painted. The supplies used in painting and cleaning — mops, rollers, paint bucket and ladder — are casually strewn within the space left in juxtaposition with Oshiro’s artworks. 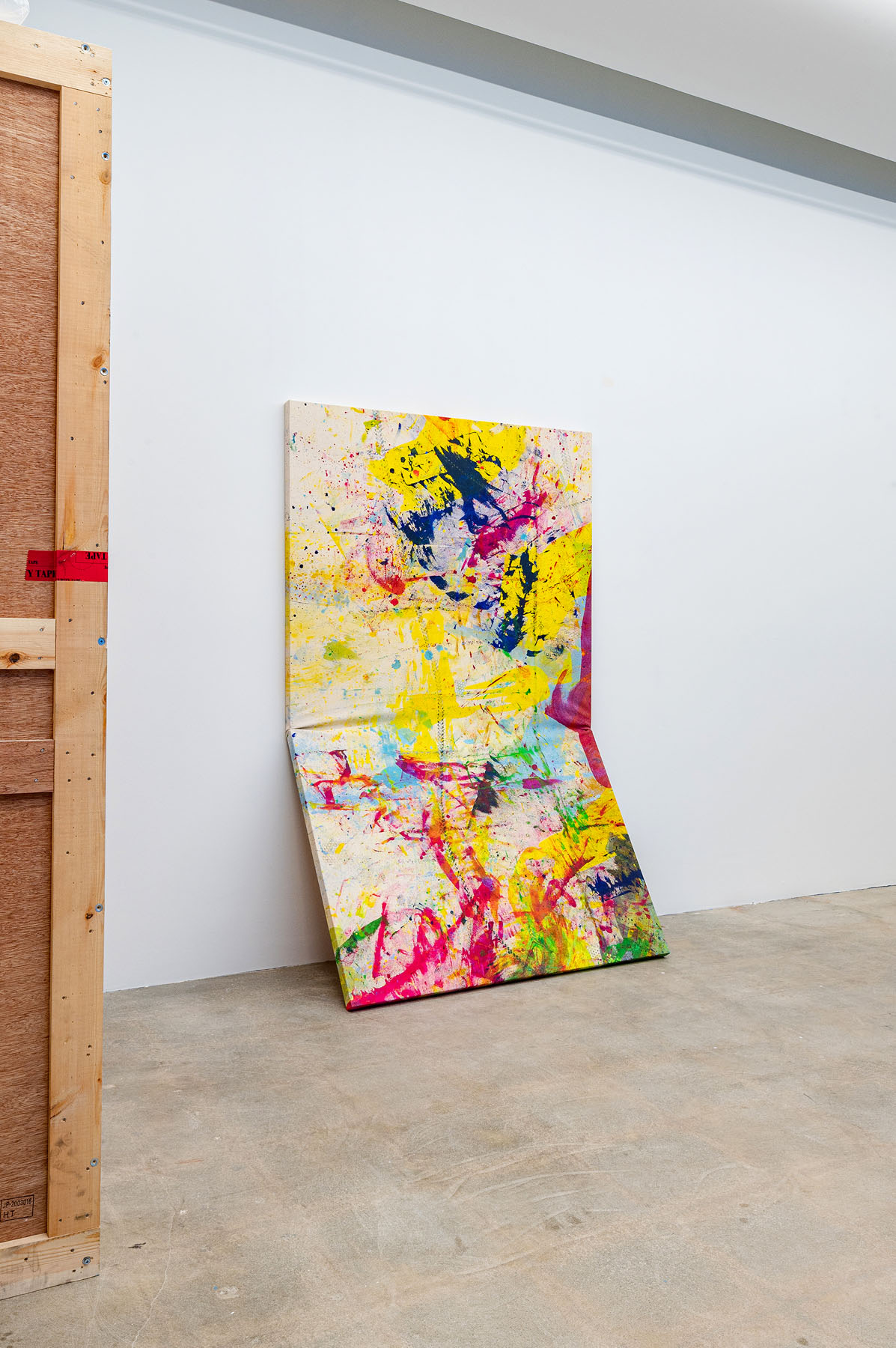 Throughout his career, Oshiro has made works that question notions of reality and reproduction. He is a “master of deception,” creating illusionist paintings and sculptures that look exactly like ordinary objects. Whether replicating speakers, amplifiers, trash bins, I-beams, appliances or kitchen cabinets, each work is a trompe l’oeil object, fabricated to simulate a well-used original. From the front, his works are often mistaken for the real thing, but from the back (which is often left open to view) the nuances of their construction reveal a complex combination of canvas and stretcher bars. Though his works are three-dimensional with many flat surfaces to cover, Oshiro acknowledges the influence of painting, be it in the style of pop or abstract expressionism, on his practice. His unique handcrafted works emulate mass-produced everyday objects. 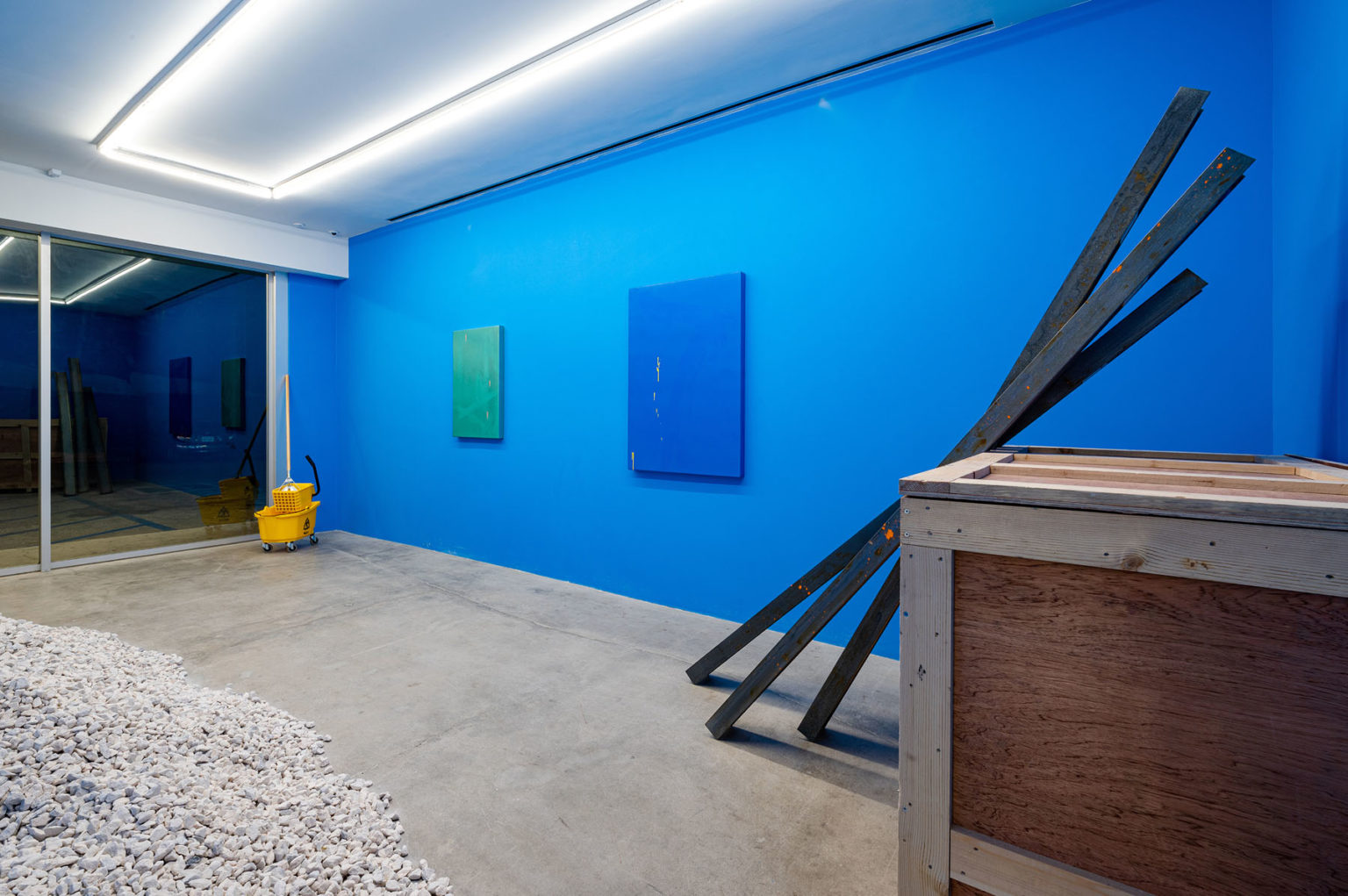 Oshiro’s installation 96375 (the zip code of his neighborhood military base in Okinawa) centers on ideas relating to dislocation, as well as misunderstandings. That 96375 is a military, not a California zip code, sets the stage for this installation which poses and attempts to answer questions. Is the gallery open or closed? Is the installation finished or in process? Which objects are artworks and which are just objects? Is the large crate in one corner a work by Oshiro or an actual crate? The crate is a crate, but the upholstered cushion leaning against it is a work of art. Without consulting the checklist, it is hard to know for certain, thus becoming part of the pleasure of the exhibition.   In the section of the gallery that has been painted white sits the crate, as well as a life-sized, graffitied dumpster on casters. Circling around the crate reveals that it is hollow, made from canvas and stretcher bars and is indeed a work of art. The same conundrum confronts the viewer regarding I-beams on the floor Untitled (Steel Beams), 2016, a trash bin, Trash Bin #4 (turquoise), 2003-4, a tailgate Tailgate (YO, Up Yours), 2020 and a torqued painting that leans against the wall, Untitled Still Life, 2014. These things are all Oshiro’s creations. 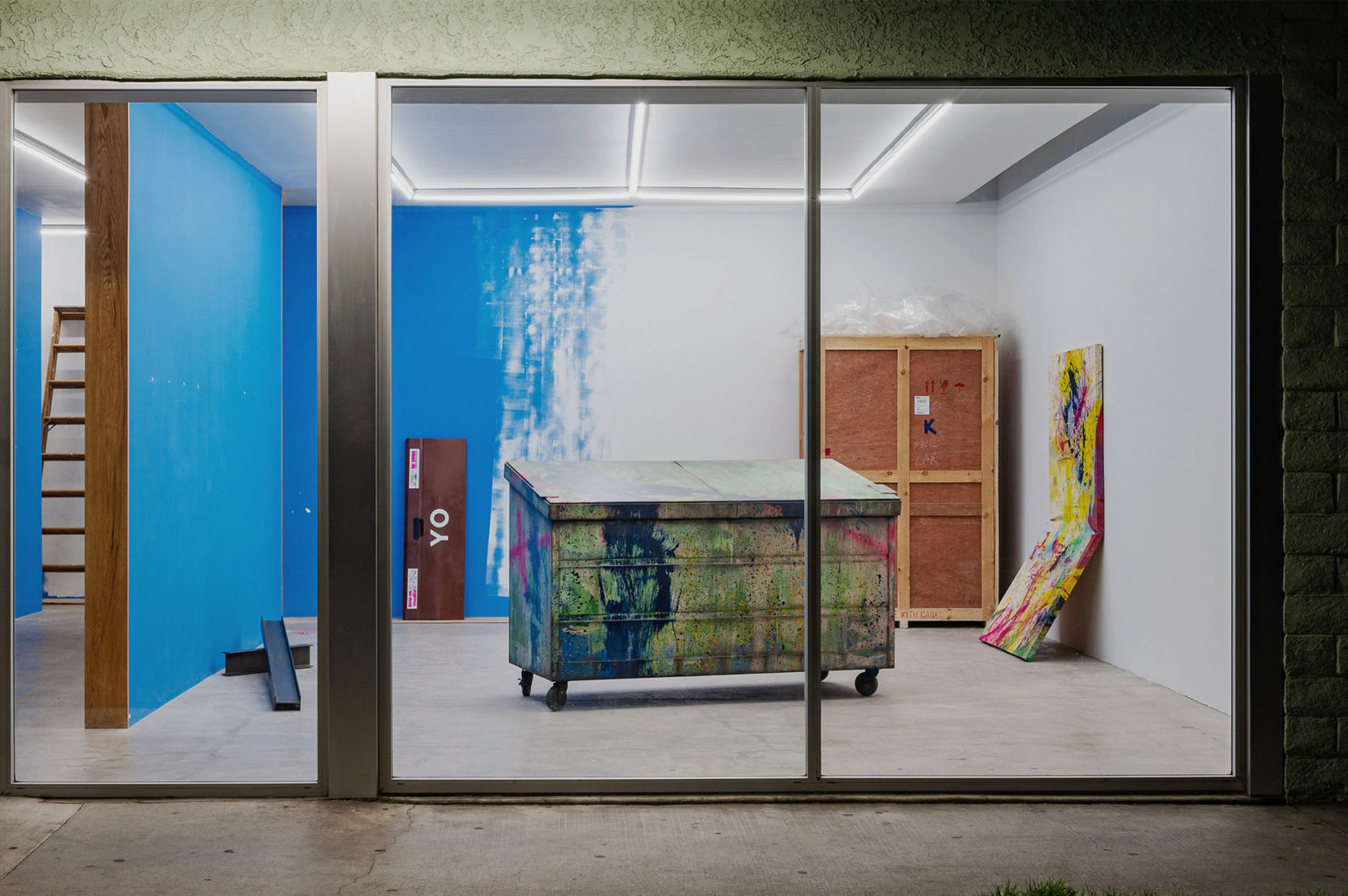 In the blue room, three more large I-beams (art) lean against an actual crate. There is a yellow mop bucket (object) as well as the remains of the rock garden from the previous installation. Amid this disarray, hanging on the blue walls, are three recent paintings: California Shuji (Pearl Seaform, Salmon Pink drip), California Syuji (Pearl Blue, Orange splatter), and California Syuji (Pearl Blue, Yellow drip), (all 2020). These abstract works reference the drips and splatters of abstract expressionism as well as graffiti and calligraphy and represent Oshiro’s merging of cultures and stylistic traditions. 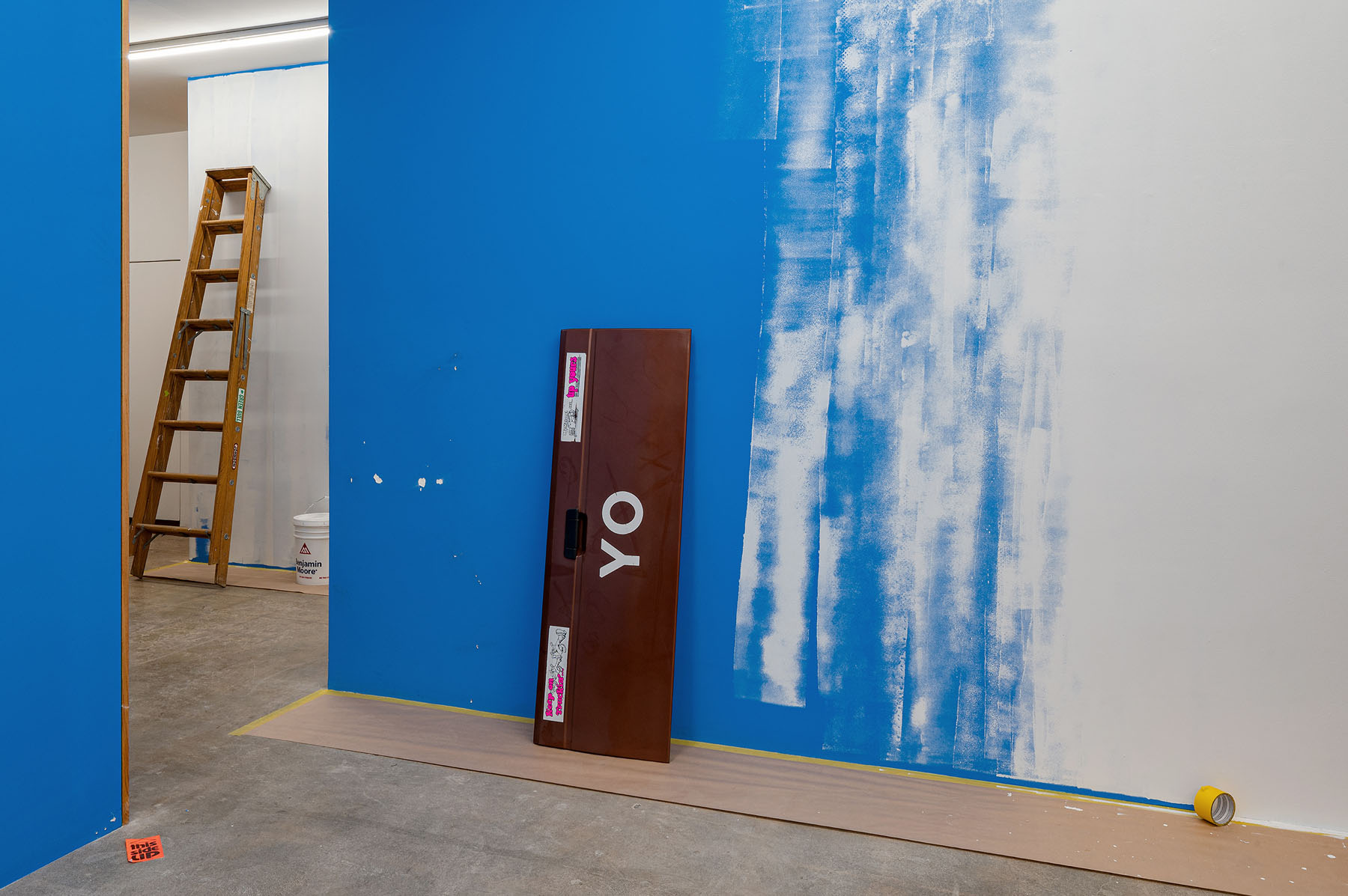 Tailgate, (YO, Up Yours)

In Oshiro’s installation, many things are and are not what they first seem to be. Oshiro wants to engage people aesthetically, conceptually and philosophically and make them think about what exists beyond the obvious and their initial perceptions. His collaboration with Nonaka Hill is daring and challenging as it confounds traditional gallery displays.