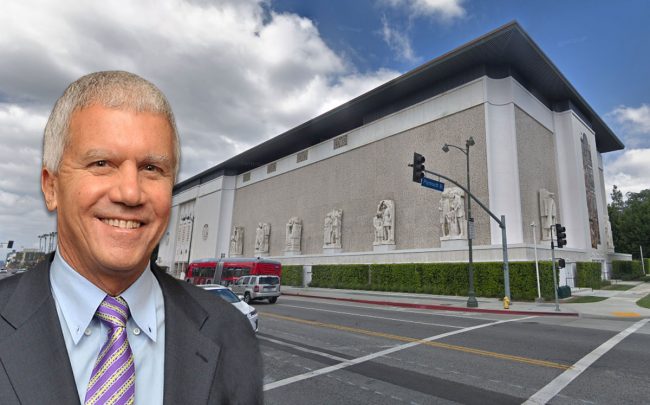 The gallery of art dealer Larry Gagosian has signed a lease for a chunk of the former Marciano Art Foundation building on Wilshire Boulevard.

Gagosian leased the 13,000-square-foot Grand Theater Gallery on the first floor of the building, which dates from the early 1960s and was originally a Masonic Hall, according to Variety. The owners are fashion moguls Paul and Maurice Marciano.

The lease more than doubles Gagosian’s footprint in Los Angeles — the gallery’s only other L.A. location is a 12,000-square-foot spot in Beverly Hills. Gagosian operates five locations in New York.

The 90,000-square-foot former Masonic temple was built in 1961 and designed by Millard Sheets, who once was the director for the Otis Art Institute.

The building has a marble and travertine façade with a large mosaic on one side. There are also 14-foot-tall travertine sculptures depicting the history of the Freemasons organization, according to Variety.

The Marcianos bought the hall in 2013 for $8 million and opened the Marciano Art Foundation four years later. They closed the foundation last November after employees attempted to unionize.

The building hit the market for $13.9 million but was delisted and put up for rent.