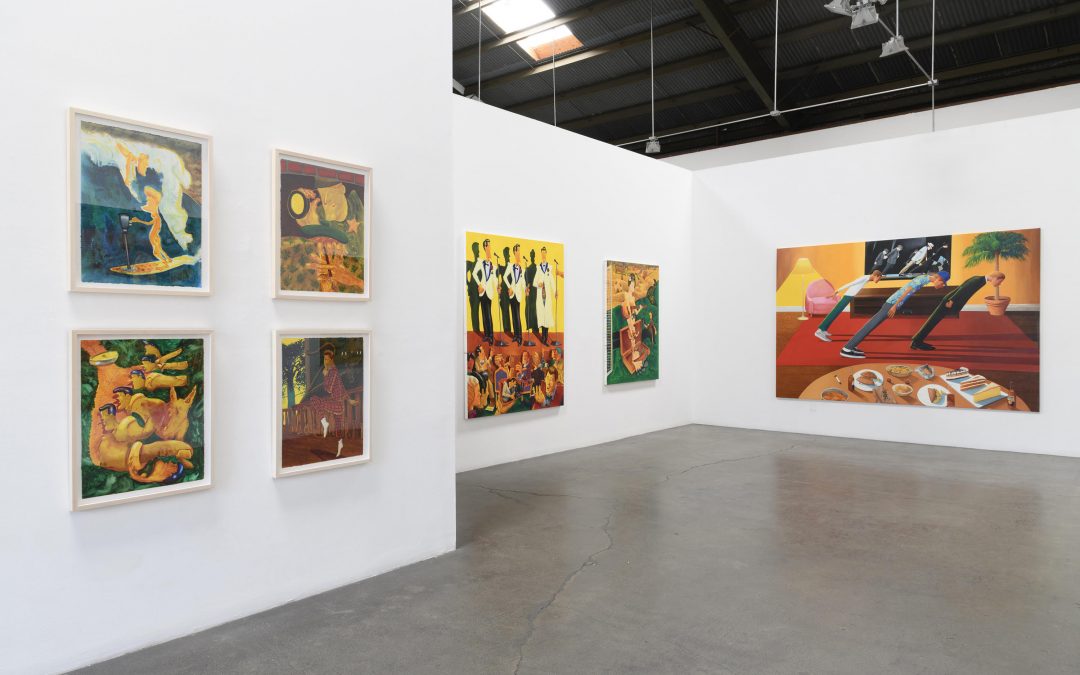 Jackson Casady is a young Los Angeles artist (just 24 years old) whose surreal and satirical paintings cull their subject matter from the entertainment industry, popular culture and the manicured landscape of Los Angeles. His figurative canvases and works on paper have a dream-like quality— as if what is depicted is at once possible and impossible. The works are humorous and disorienting, functioning like absurdist dramas filled with self-contained micro narratives in which made-up characters do the most uncanny things. For example, in Smooth Criminals, (2019), three men emulate Michael Jackson‘s gravity-defying lean. The large-scale (78 x 114 inch) painting depicts a minimally furnished but stylized living room with hard wood floors, flat-screen TV, red rug, pink arm chair, green potted plant and a floor lamp. Playing on the television is a clip from Jackson’s video (Smooth Criminal) where he is in the midst of that famous lean. A round table occupies the bottom third of the canvas. On it are three Corona beers, three triangular slices of cake as well as uneaten plates of tacos. It appears as if mid-meal, three male figures magically levitated from the table to the center of the rug, perfectly paralleling the positions of the leaning dancers on the TV behind them. Their balance is as precarious as their identities. 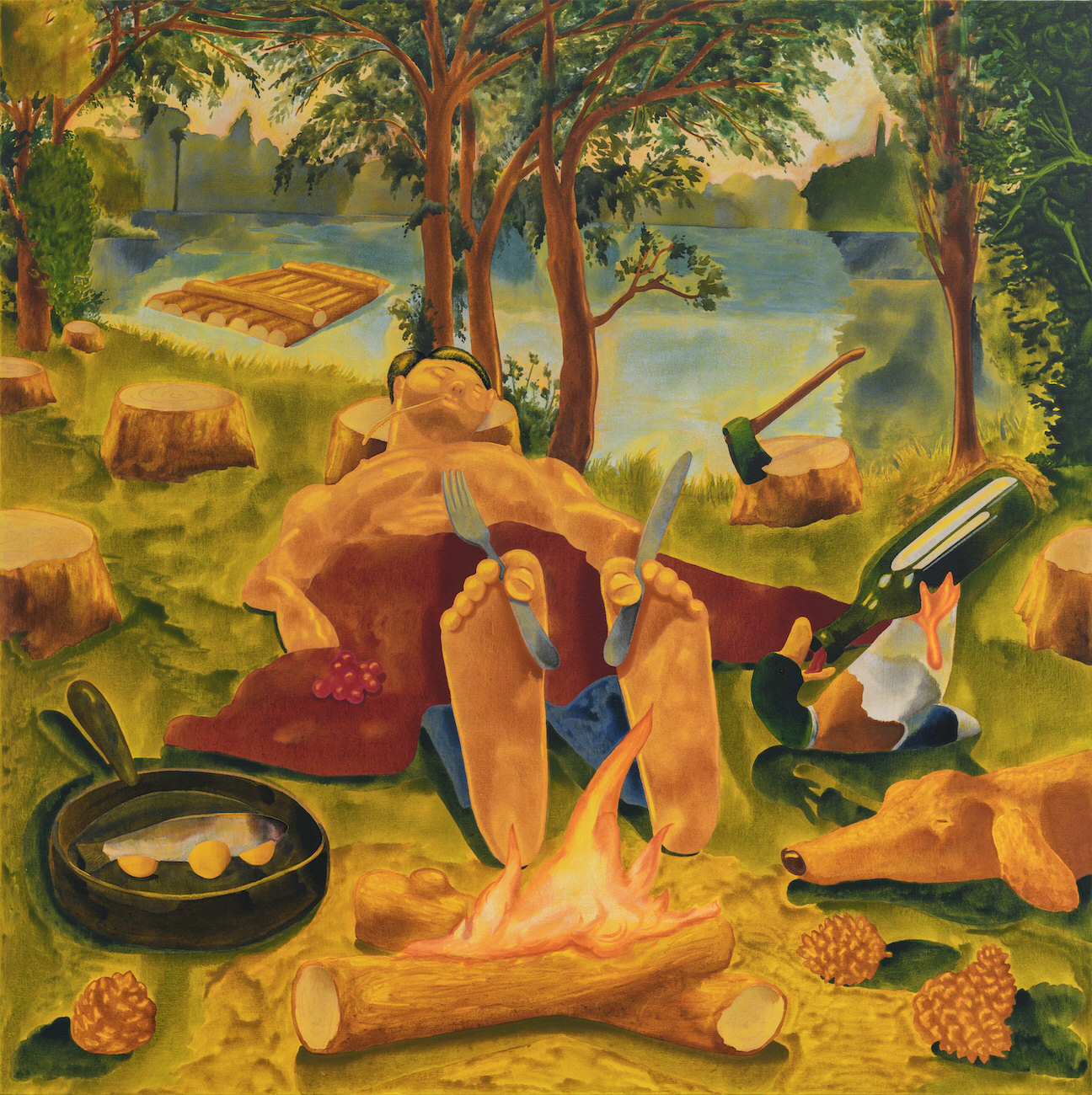 Minor Major 7 (2020), depicts a similarly fantastical scene. Here, Casady creates another absurd situation. In a large wood-paneled foyer, Casady paints a red carpeted staircase that leads up to a narrow green wall-papered landing. Centered in the middle of the painting at the base of the stairs is an oddly skewed upright grand piano. Multiple scenarios unfold on the piano’s lid, including a conductor climbing a ladder and visiting the bedroom of a naked woman while battling an attacker amidst the piano’s strings. Along the landing, equally disjointed activities take place— a woman on a phone, a dog leaning on the railing surveying the scene, three identical men in striped shirts listing to their left, and the denouement — an injured or dead body. These activities become the narrative of a cartoony thriller, giving the painting its intrigue. 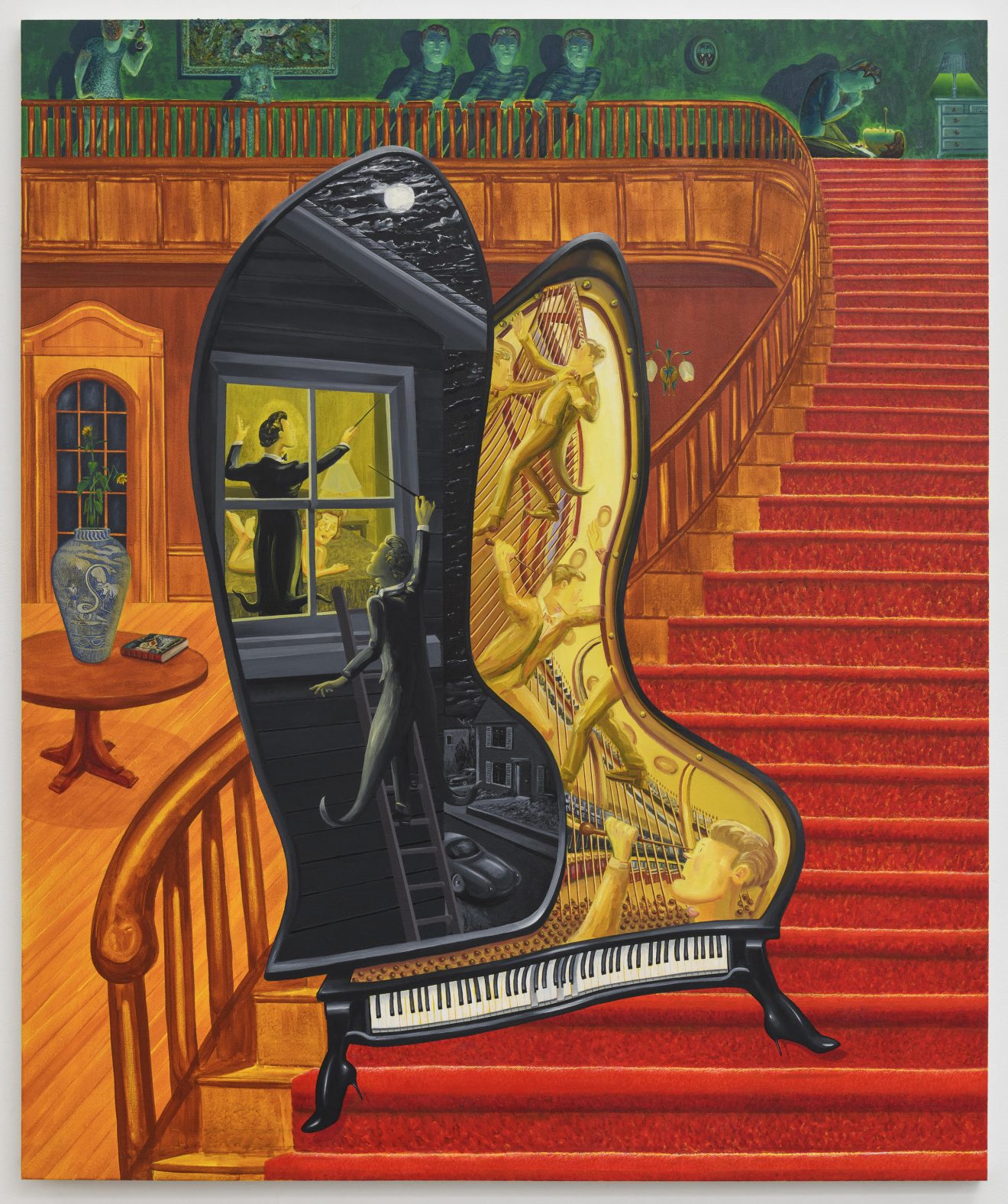 Slouching towards La La Land (2020) can be interpreted as a riff on both the film La La Land and Joan Didion‘s 1968 classic, Slouching Towards Bethlehem. In the painting, a slumbering man wearing plaid pants slouches in a vine-covered arm chair, using his dog as a footrest. He not only ignores what remains of his take-out McDonalds meal, but seems oblivious to the surreal horror show outside where a giant tongue emerges from a man trapped within the body of a huge green frog. Three extra- long twisting golden arms emanate from various unlikely places on a statuesque woman in a fancy white dress. Each one holds a dragon-fly winged golden mallet as an offering for the frog-man’s tongue. 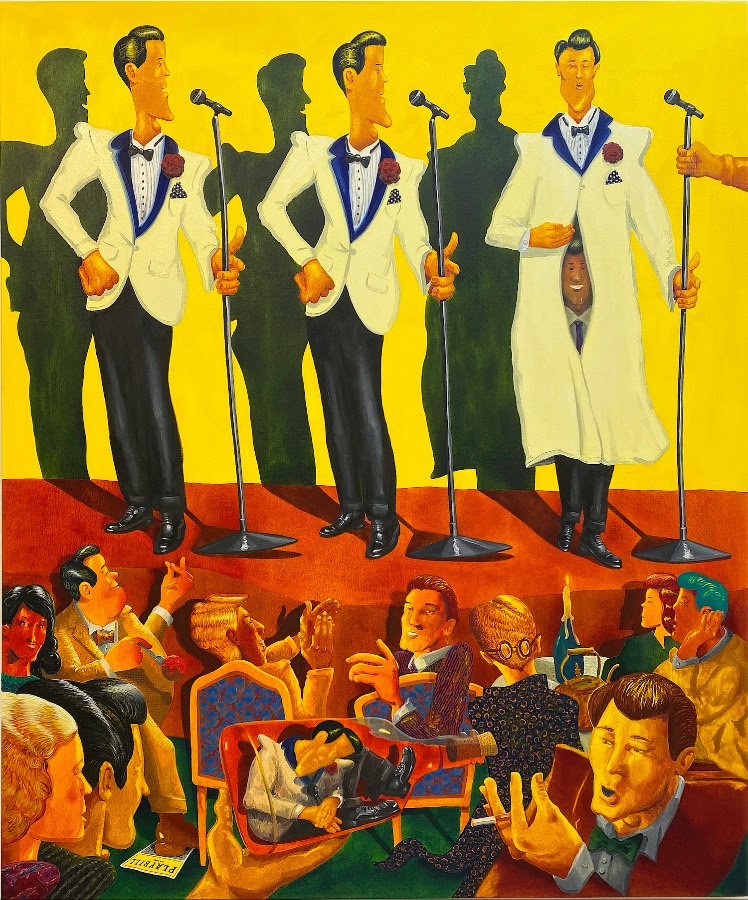 Casady’s paintings are beautifully rendered, combining both acrylics and oils to give the images a glowing aura. He uses thin and impasto brushwork within the same images. He also plays with simultaneity, scale shifts, unbelievable perspectives, flatness and depth. Casady renders each element with exacting care and detail turning his fantasies into reality. His paintings are over-the-top narratives that use the ruse of Hollywood (where he worked as a production assistant) as a point of departure. The scenes Casady paints are weird, yet slightly familiar and extremely engaging. Each work unfolds like a mystery in which the artist weaves together myriad clues that appear to elucidate the internal narratives within his dreams. Yet the goal is not to solve the puzzle, but rather to enjoy the process of discovery and to marvel at Casady’s keen wit, use of cultural and art historical references and skills as a painter to create wonderfully strange and magical images. 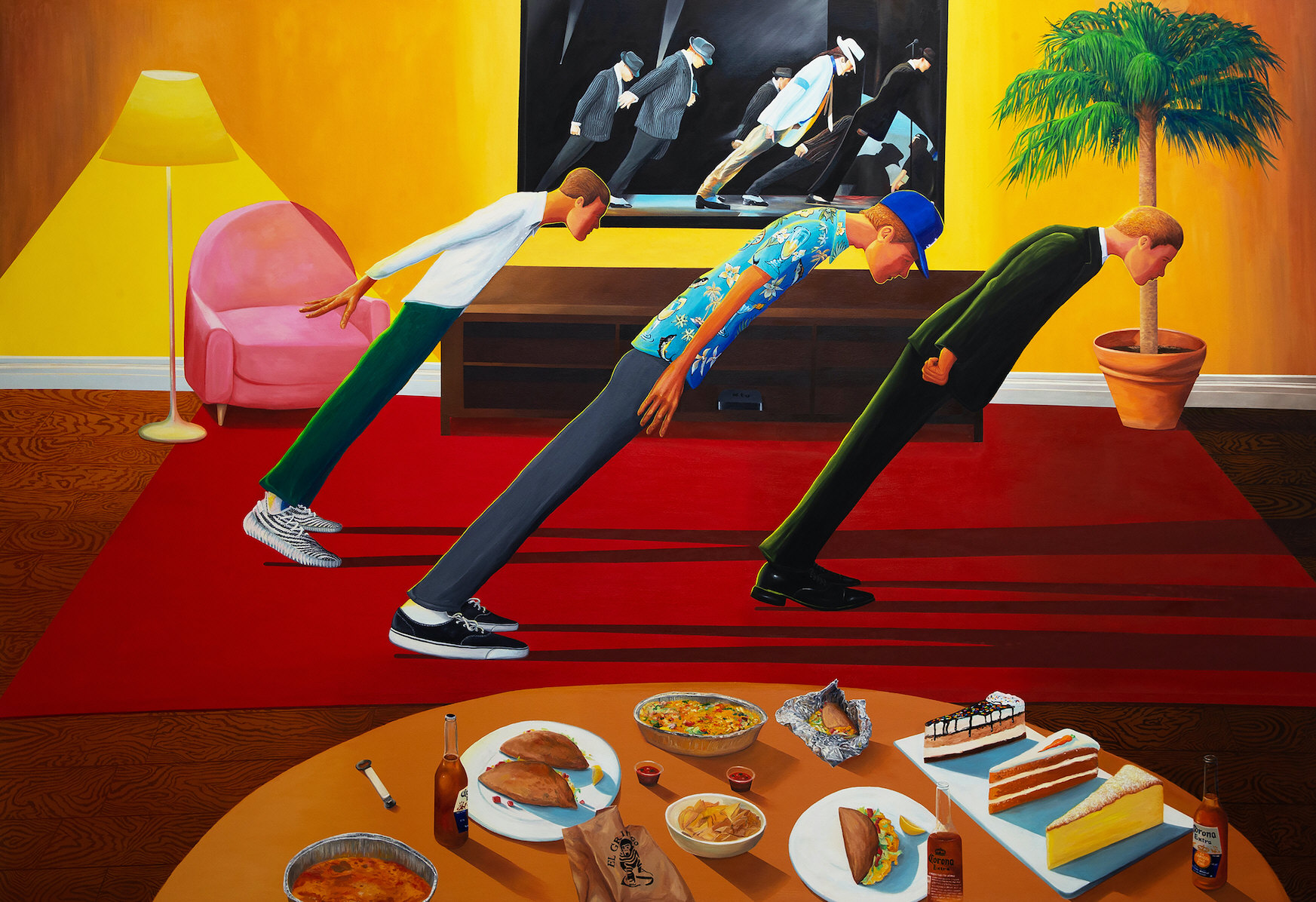