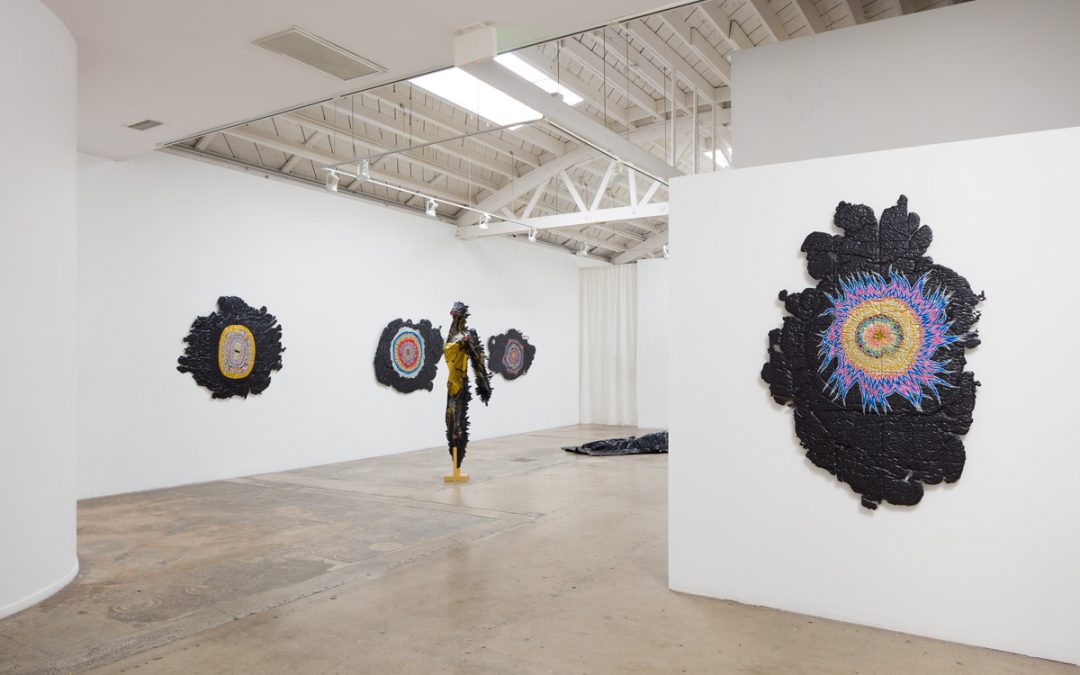 In his exhibition, All Season Radials, Jamison Carter presents urethane resin works that fill the walls and floor of the gallery. These new pieces are made by combining poured urethane resin with drawing. Carter creatively experimented with these materials and ultimately devised a new technique whereby he draws with markers directly onto large sheets of plastic. He then pours black resin onto these sheets, molding the resin forms into irregular shapes. The finished works approximate flowery nebulas floating in black space. In previous series, Carter’s mixed-media sculptures were hard-edged and geometric, often containing bursts of wooden shards. He often presented his sculptures alongside abstract drawings that echoed the three-dimensional forms. In All Season Radials, the drawn and sculpted elements have merged. The bright concentric stripes and rigid geometry that dominated previous works have been replaced by drawings containing celestial bodies, inspired by the night sky that simultaneously reference the shape of the COVID-19 virus and formations within sand mandalas. The drawn elements within the works shimmer in contrast to the flat back plastic (some are even rendered with metallic tonalities) which reinforces their astrological nature. Works like Portal (2020) and Time (2020) are reminders of the thrill of looking through a telescope into the darkened sky and seeing a bright, colorful planet undulating through space. Because the works are drawn on plastic and transferred onto the resin, there is an imprecision and modulation to their form which Carter embraces. They resonate, but also feel fleeting. In works such as the diptych Carnation Nebula, (2020), portions of the painted starburst inhabit two separate pieces of the wall mounted black urethane resin as if an explosion broke them apart. A similar juncture occurs in Landslide as the painted fragments are split between two resin shapes. While Carter’s resin wall pieces are thought provoking and compelling compositions that suggest portals into another world, his sculptural works are enigmatic creations with more earthly and human associations. That Carter’s parents passed while he was preparing for this exhibition influenced some of the pieces and can be seen as memorials to them. Mother husk, for example is a black resin totem decorated with golden lines that evokes the body as well as the spirit and stands 81-inches tall. Father rest extends horizontally across the floor— an amorphous body covered by a tarp. The shape of a figure is suggested by the folds of the black resin. Although Carter has mapped the planets in the night sky onto the tarp, this work is mired an aura of death. Carter’s recent sculptures and drawn nebulas are imaginative, textured creations that extend to other realms while simultaneously being rooted in the realities of now. Though it is difficult not to view the exhibition within the context of the world-wide pandemic, Carter’s works continue to be personal explorations that touch on spiritual as well as universal themes.