Zoe Walsh: I Came to Watch the Morning Rise 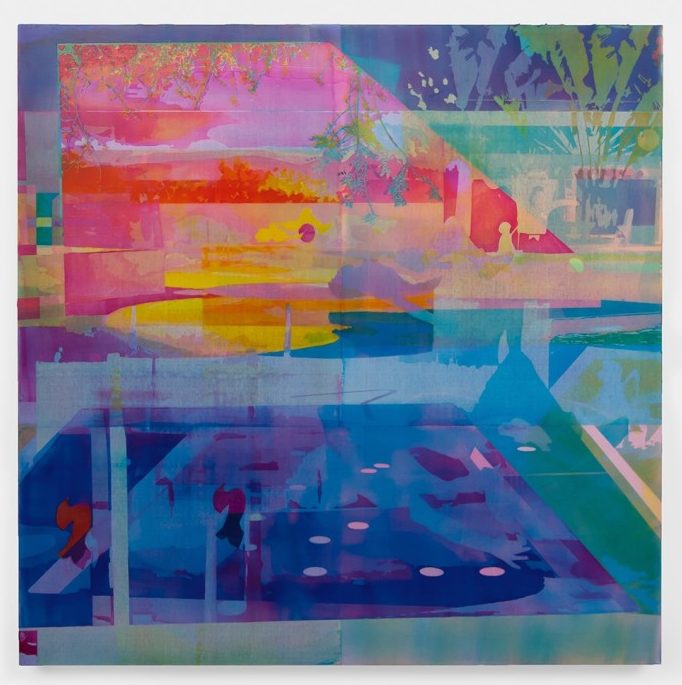 Zoe Walsh’s work explores ways of constructing non-linear relationships to time, history and identity through a lens of trans subjectivity. The position of trans identification is informed by the experience of looking from a distance, seeing through screens and reimagining the limits of the physical body. The artist’s process reflects this layered vision by working between different media—from sourcing film stills and the digital worlds of Sketch Up and Photoshop to the physical realm of paint on canvas. This investigation into intermediality results in atmospheric works, with refracted forms and silhouetted figures emerging from cyan, magenta and yellow glazes.

For this body of work, Walsh worked from a set of photographs produced by Falcon Studios (one of the world’s first and most prolific producers of gay pornography) in the collection of the ONE Archives in Los Angeles. Taken in the late 1970’s, the photographs depict two men in and around a pool. An iconic element in southern California culture, the swimming pool is also a site where boundaries between public and private often become unfixed. One must navigate the regard of others, moments of reflection and physical vulnerability. Walsh uses the pool as a threshold space, one that carries the potential for desire and pleasure but also heightened surveillance, exclusion and anxiety.

Walsh subjects these photographic images to a series of material transformations. The artist first isolates the silhouetted figures and then sets them within a virtual set, recombining the renderings into digital montages. These montages are silk-screened onto canvas; the surfaces built up with glazes of thick translucent gels of paint mixed to different saturation levels. Paint asserts its physical presence: absorbing into the ground in some areas, and built up thick with edges interlocking in others. These procedures of mediated visuality anchor Walsh’s practice—the works hover between certainties, with instances of mis-registration, fragmentation and repetition disrupting any legibility.

Textual reference also plays a large role in Walsh’s work. The works in this series are titled after the writings of Samuel Delany and Marilyn Hacker. In Prism and Lens, a poem by Hacker, the narrator describes finding herself alone at home and wandering out into the streets as night falls, eventually catching glimpses of clandestine sexual encounters between men, a mediated experience of looking from afar. “Dull gold in dim rooms, figures pause and pass / naked between a prism and a glass. / The lamps along the river, one by one, / spear the dark wings that hover on the sun.”