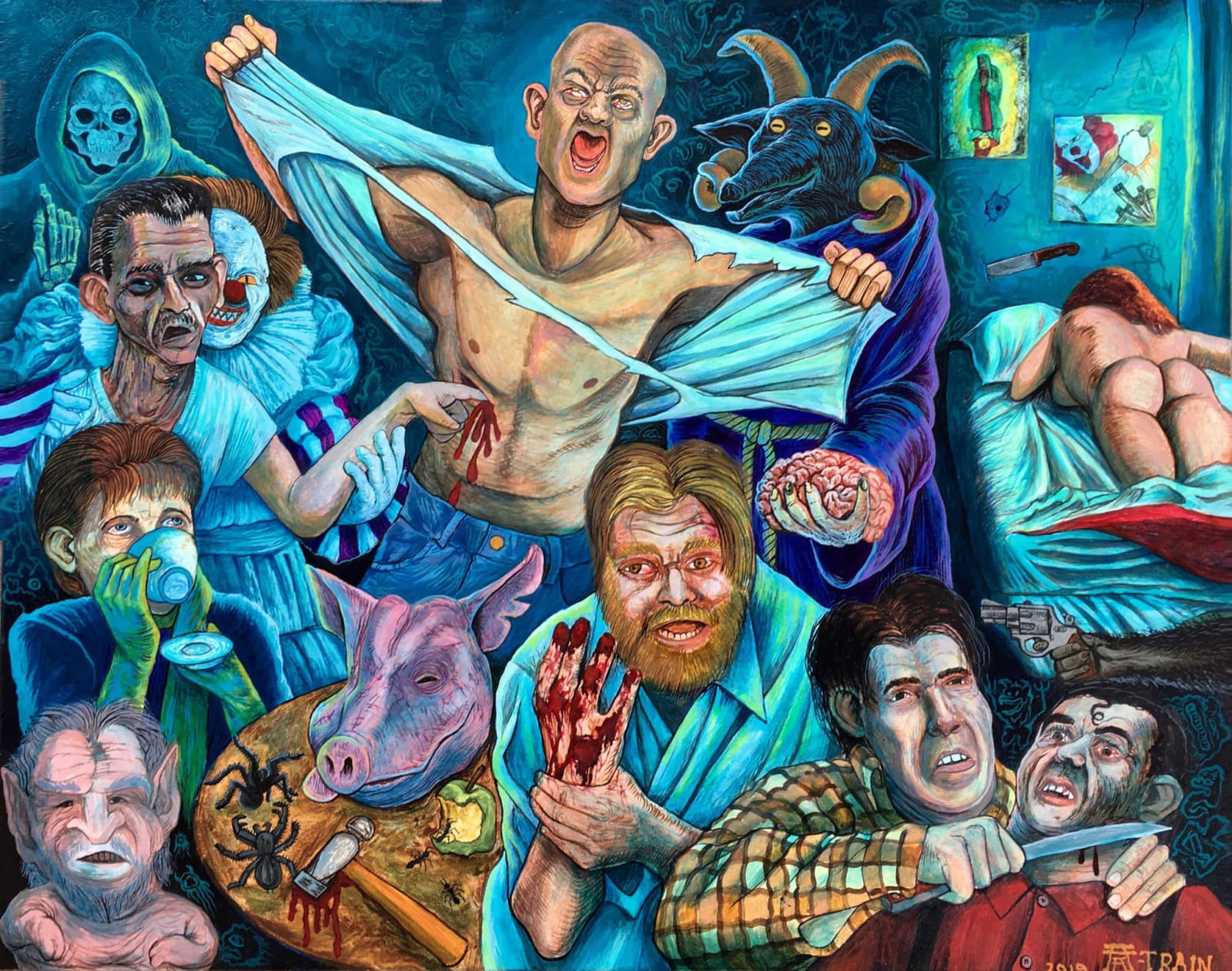 Albert Alvarez, The Incredulity of Man

“The 99%: Recent Works by Albert Alvarez, Jodi Bonassi, and José Lozano” currently at Mash Gallery and curated by David S. Rubin, showcases works by three artists who are keen observers of everyday life. Rarely without their sketchbooks, Bonassi and Alvarez both record their observations of strangers by drawing while riding public transit. Their sketches are then used as points of departure for painting or drawing skillfully crafted, highly detailed fantasy narratives. Although Lozano works largely from his own imagination, he bases many of his figures on people observed at laundromats, grocery stores, parties, and on the streets of his Mexican-American neighborhood.

Alvarez’s paintings and drawings scrutinize the dark side, which he interprets in disturbing narratives on such topics as boredom, alcoholism, and domestic violence, often combining caricatures of neighborhood locals with familiar pop culture or religious figures. Alvarez considers his paintings and drawings to be contemporary morality tales. “I see these kinds of dystopian narratives all the time in television, movies, and video games,” he explains, so, “my paintings function in a similar way. They can entertain us while showing us how not to behave, hopefully encouraging us to become better people.”

Bonassi’s paintings, by contrast, tend to be hopeful and optimistic, as her goal is to celebrate the humanity of people seen on the Metro or in neighborhood barbershops, malls, and cafes. Bonassi has commented, “The rich cultural diversity of Los Angeles and its surrounding areas is a sweet reminder that we are all here together. Inclusion and diversity, necessary freedoms that are hard won, add to the rich cultural hybridity of the times. Even as I paint the monsters hidden on the canvas, I must remain hopeful. There is always dark and light together but I force myself to see the light.”

Lozano’s works are neither pessimistic nor optimistic. Rather, he sees his art as a vehicle for understanding the culture that he was born into. According to Lozano, “I can’t say I’m speaking for Latinx culture, I’m speaking to the world through it. These are my generic existential Mexicans whom I’ve been trying to figure out, but have not been able to. Each drawing and painting is an attempt at it.”

According to Rubin, “’The exhibition celebrates the art of three extraordinary artists with vivid imaginations, who create detailed fantasy narratives that examine human nature and culture from differing perspectives—hopeful, cynical, and objective. Collectively, they reveal the many faces of everyday people, the so-called 99%.”