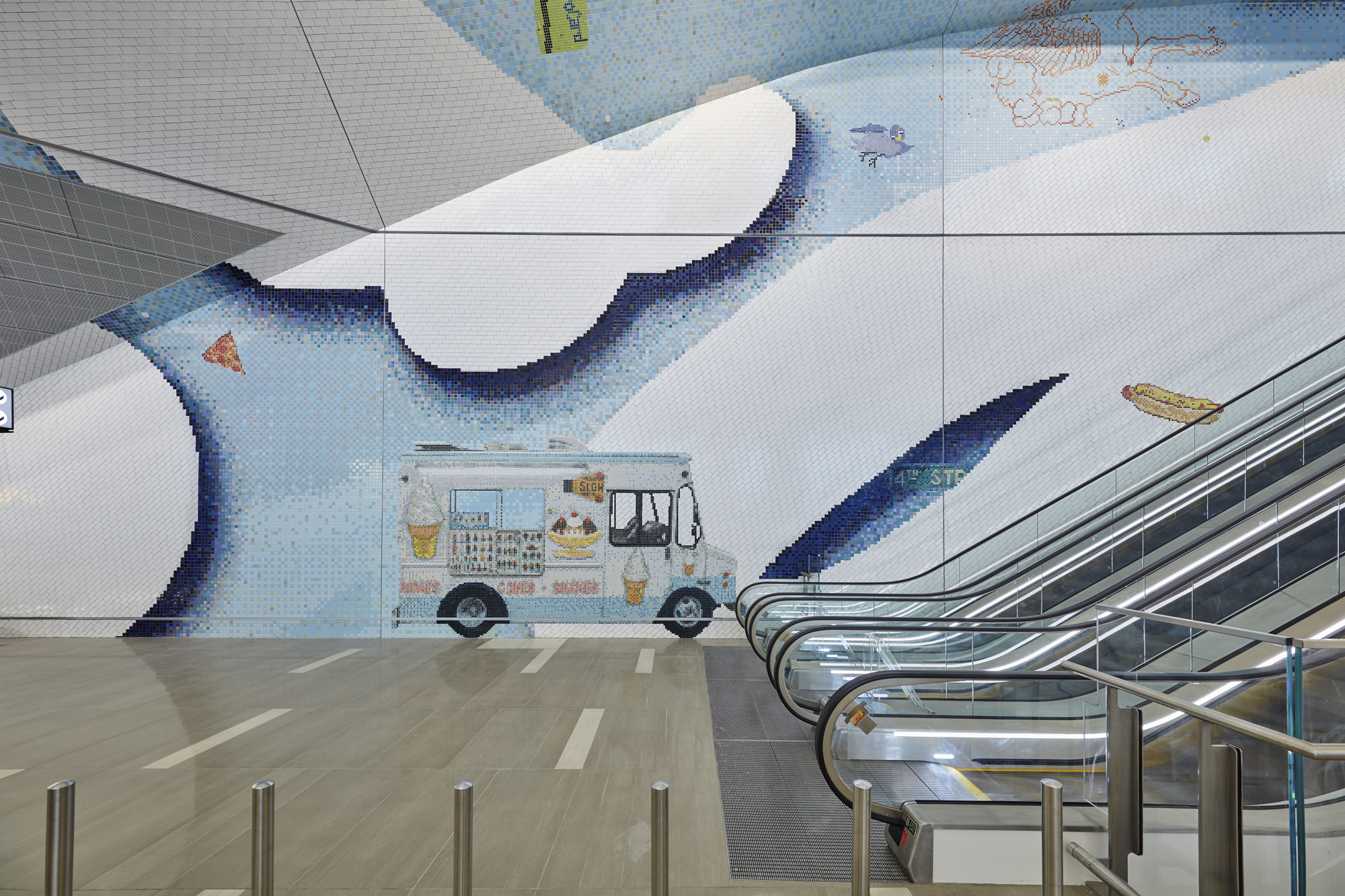 Revolutionizing the public’s experience with one of New York’s most important gateways, the partnership brings four ambitious permanent public art commissions to travelers passing through the new terminal. The site-specific, large-scale installations by four of the world’s leading artists–Jeppe Hein, Sabine Hornig, Laura Owens, and Sarah Sze–will be unveiled with the opening of the new Terminal B Arrivals and Departures Hall later this year.

“New Yorkers will soon have a major terminal at LaGuardia Airport that reflects the energy, vitality, and innovation of New York City,” said Nicholas Baume, Director & Chief Curator of Public Art Fund. “Great art and artists are fundamental to New York’s DNA, and we are excited to collaborate with several of the world’s most visionary artists, LaGuardia Gateway Partners and The Port Authority to create a unique new terminal that brilliantly expresses the creative spirit of New York.”

“We are thrilled to partner with Public Art Fund on this innovative project to continue to transform Terminal B into a modern, top-class airport terminal for travelers,” said Stewart Steeves, CEO of LaGuardia Gateway Partners. “Our goal in building a new Terminal B is to not only implement state-of-the-art advancements, but to also create a space that represents the soul of New York. We are confident that through this partnership, we have selected artists and unique pieces for the new terminal that reflect this vision.”

Working closely with the leadership of LaGuardia Gateway Partners, Public Art Fund invited a select group of artists to develop proposals for original and iconic permanent commissions, expressing the vital essence of New York City and conceived specifically for the new LaGuardia Terminal B. After a thorough evaluation of all proposals, four of these artists were awarded permanent commissions for the Terminal B Arrivals and Departures Hall. All permanent installations will be complete for the opening of the Terminal B Arrivals and Departures Hall in 2020.

Jeppe Hein: A resident of Berlin, Jeppe Hein creates interactive artworks that lie at the intersection of art, architecture, and technical inventions. Unique in their formal simplicity and frequent use of humor, his works recall traditions of Minimalist sculpture and Conceptual art of the 1970s, and often feature surprising and captivating elements that focus the spectator’s experience on the surrounding space. Hein’s notable previous exhibitions include Please Touch The Art exhibited at Brooklyn Bridge Park in 2015, as well as permanent installations in numerous locations throughout Europe.

Laura Owens: Los Angeles based artist Laura Owens has achieved international recognition for her dynamic and experimental paintings. Incorporating diverse references and techniques, her art challenges the nature of painting in bold and often witty ways, while demonstrating an intimate awareness of form, color, and line. Owens’ work has been featured in museums internationally, including the Art Institute of Chicago, the Guggenheim Museum, Museum of Modern Art in New York, Tate Modern, Centre Georges Pompidou, the Whitney Museum of American Art, and other prominent institutions across the globe.

Sarah Sze: A resident of New York City and professor of visual arts at Columbia University, Sarah Sze’s immersive, large-scale works navigate the proliferation of images, objects, and information that surround us daily by employing complex constellations of myriad materials. A recipient of the MacArthur Fellowship in 2003, Sze has exhibited extensively in museums worldwide and represented the United States at the Venice Biennale in 2013. Sze has been engaged in public commissions throughout her career, most recently Blueprint for a Landscape, 2017, which transforms the 96th Street Station of the new Second Avenue Subway Line.

Complementing the four permanent commissions, the partnership includes additional temporary artwork installed throughout the facility, providing more artists the opportunity to engage with the new terminal and its visitors. The first of this series was installed in July 2019 in the new eastern concourse, the initial portion of the new Terminal B to debut, and currently features artworks by New York based artists Chris Bogia and Olaf Breuning.