Bill Barminski: ‘Experimenting with the Unexpected’
Work in the Time of COVID-19 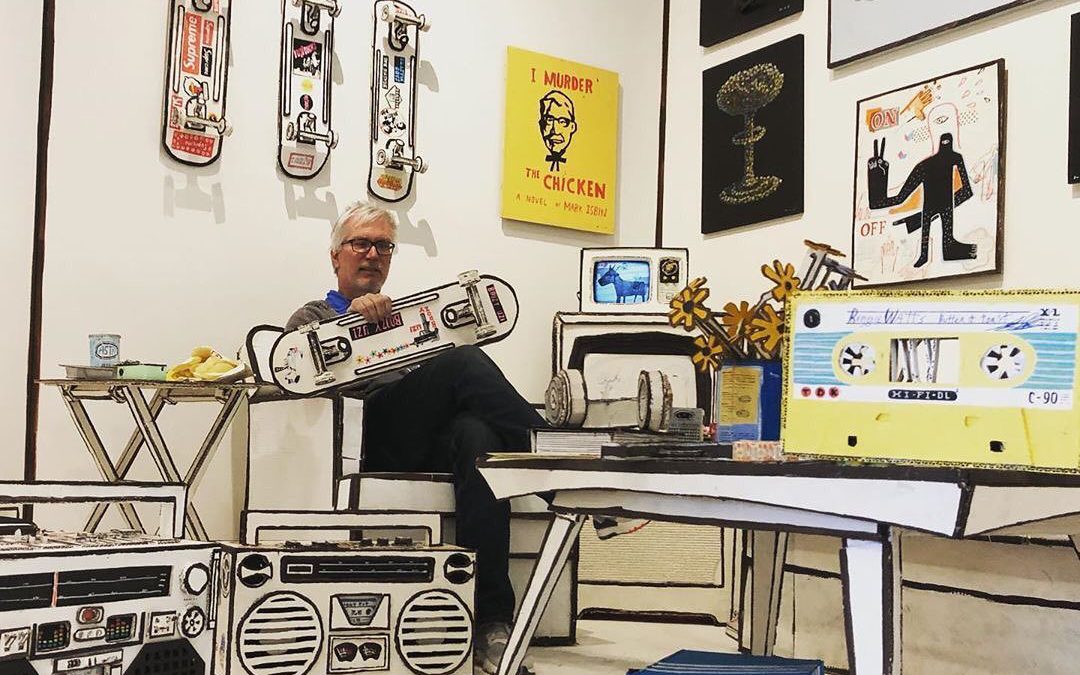 Bill Barminski is full of surprises. He is an imaginative and versatile artist who has worked in a wide range of media to create projects that are humorous and charming while also socially and politically astute. Before immersing himself in digital media, Barminski exhibited paintings that critiqued a 1950’s American consumerist mentality. Often, these pieces referenced popular culture as he would repetitively use familiar imagery as a point of departure. 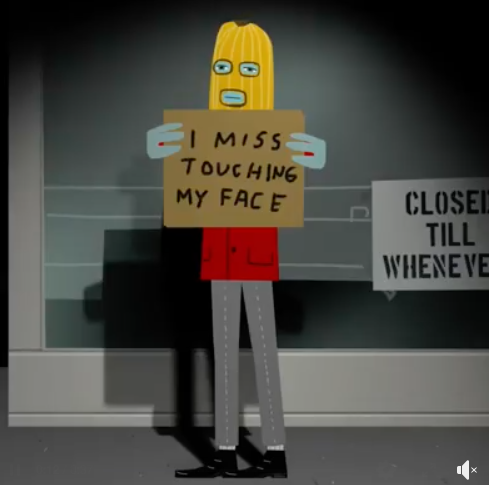 Text featured prominently, directing the viewer’s interpretation away from the expected. In his cardboard sculptures (which he began in 2008), he reproduced everyday objects as oversized white forms with black outlines, many of which also included moving or electronic elements. Currently, Barminski is exploring different forms of animation including projection mapping and augmented reality. His recent projects can often be found on his various social media channels. 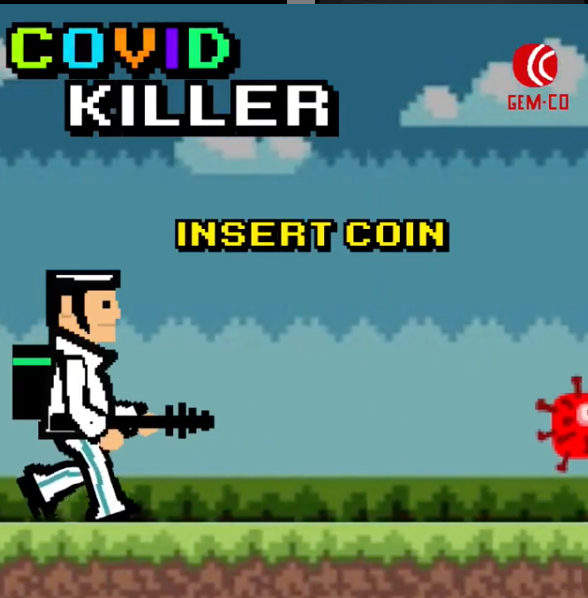 Barminski is used to working alone in his home studio, yet in this time of Covid-19, what he finds different is “the knowledge that there is a shared common experience.” A new series of animations called Burnt Marshmallow captures this spirit of isolation. In each short episode, his characters deal with the current situation in different ways, both amusing and frightening in their truth. Barminski likened the experience of isolation to “sitting alone in the woods by a campfire. Which, in and of itself can be a beautiful experience, but in this case, you burn your one and only marshmallow.” 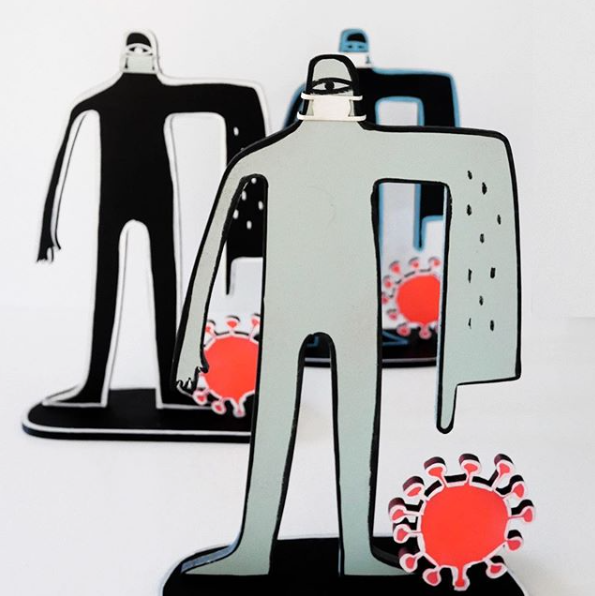 In his animations, Barminski’s figures wear masks that are extended beanies with cut-out eyes and mouth holes. In one episode entitled Quarantainment, a figure holds a beer can in one hand and a television remote control in the other, repeatedly asking Alexa to show him movies on Netflix he has not seen. Alexa replies he has seen them all. The figure sighs and remarks, “this is bad…” 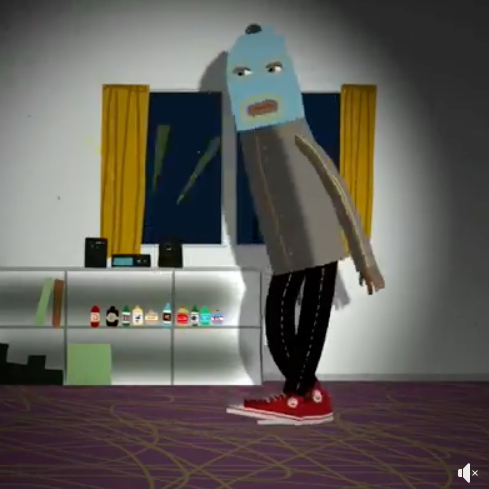 In another episode, Zoom Bomber, four friends are talking via Zoom when a scantily clad stranger suddenly joins their party and begins to dance. The friends quickly leave the call. In Dancing With Myself, Barminski depicts each of his characters awkwardly dancing alone in their home to the Billy Idol song, Dancing With Myself. The camera slowly pans back to show multiple apartment windows, each with a lone figure dancing. Barminski succinctly calls attention to both the need to connect and for shared experience. 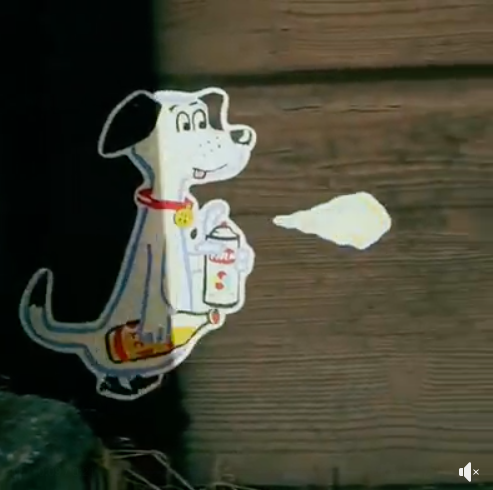 In addition to these animations, Barminski has also been posting documentation of projections— ad hoc works he clandestinely displays at night in his Los Angeles environs. In BoozyUzi walking and strutt’n, a cartoon dog saunters through the grass and against an old wooden shingled wall spraying a stream of flowers from his can of Krylon paint. In others— Covid Killer and Covid Crusher, figures and animals created using a 2-bit graphic style, repeatedly smash or shoot at the Covid virus, accompanied by low tech pinball machine sounds. 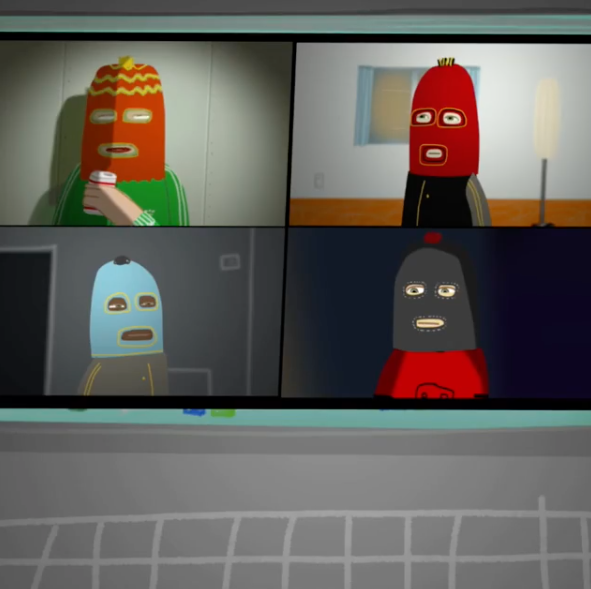 Barminski often recycles images from his personal archive, including old record albums, spray paint cans, cassette tapes and Uzzis, as well as cyclops figures (who now wear masks) that shoot flowers from an oversized arm that doubles as a gun. Many of Barminski’s animations function like PSAs. They proclaim direct messages, like “don’t touch your face,” or “wash your hands.” Enjoy is a quirky animation in which a mask- wearing cartoon figure jumps to the top of a giant can of spray paint labeled ENJOY. He pushes the red button and amidst a spray of white, come the words, “yourself… it’s later than you think.”

Barminski’s experiments with augmented reality and projection-mapping need to be seen in person. In these works, he often layers animations over or within static objects, bringing them to life. While Barminski’s works have a narrative form, they are not belabored. Each image or animation is a playful take on our new and strange everyday realities. In the time of Covid-19, they have become more serious, cutting, direct and to the point.