Austyn Weiner: ‘Head’
Processing the Past and the Present 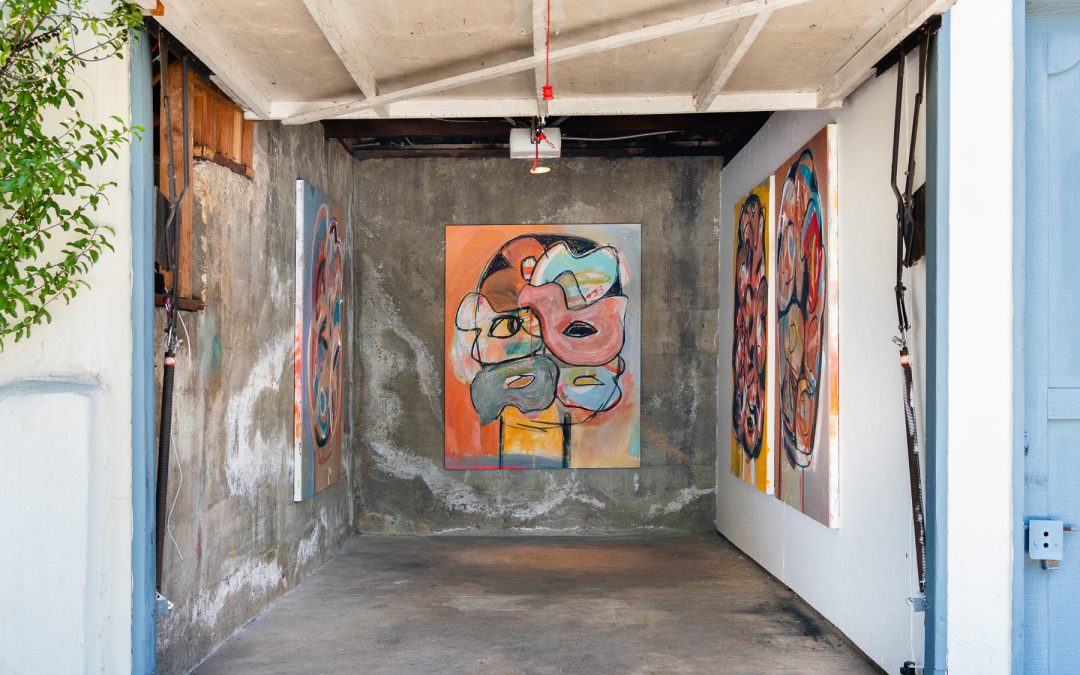 Los Angeles-based artist Austyn Weiner seems to be thriving in quarantine. This makes sense considering she is an artist whose very practice “denotes and engages a recourse in chaos” (artist’s website). Born in Miami and having studied photography at the University of Michigan, Weiner eventually found her way to the Parsons school of photography, though she would soon begin her career as the artist we know today. Through paint, charcoal, oil stick, canvas, paper, and beyond, Weiner’s pieces grapple with themes of reclamation, romance, and isolation. The young artist has previously exhibited her work at, among others, Bill Brady Gallery, Ibid Gallery and The Lodge – and is currently in a group show at the by-appointment Kohn Gallery – with this installation, no doubt, her most intimate. ArtNowLA sat down with Weiner to discuss life and work in quarantine and how she came to produce HEAD – an appointment-only show hosted in her one-car garage in Silverlake, where, of course, social distancing measures were taken. L: An Empty Invitation; The Strand Is Mine (self-portrait)

When asked how she’s been coping, aside from her art-making, Weiner, who was born in 1989, acknowledged that there have been “a lot of ups and downs, but it’s been great. At first, I was very skeptical of what this time alone would bring, but now I’m really appreciative of it. Keeping structure and a routine has helped – waking up at the same time no matter what and taking the time to kind of be uniform about my day. Overall, I’ve weirdly been coping pretty well and feel, as artists, we have a bit of an upper hand, because our life feels a bit like a quarantine.” L:The Strand Is Mine (self-portrait); All Of The Things You Never Let Me Say

That uniformity is evident on Weiner’s Instagram, where she’s been posting a series of reflective stories she calls her “morning show.” Just as a pursuit of human connection is the subject of so much of her work, it seems to be the way she also lives her life. “In general, I do feel one fuels the other and in my normal life when I try to separate the two or be too isolated, I’m usually not inspired as much or I’m forcing paintings. It’s been a struggle and a dance, but ultimately I think it’s taught me a lot about personal boundaries. Instagram is great [although] I think we all go through phases of hating and loving and loving and hating it, but during the quarantine I have been able to share a lot all at once with people I love and people that I don’t know.”

Weiner explained that the garage show grew out of wanting to exhibit some of her favorite works. “Once they started revealing themselves, I was like ‘Wow, I want to show these, I don’t want to wait until a show when all the world opens,’ so I did it pretty organically.” All Of The Things You Never Let Me Say

The four paintings on the garage walls are made with layers of oil paint, charcoal and oil stick. An Empty Invitation (all works 2020) rests on the back wall, its undulating shapes having a quasi-cubistic quality, the central eyes a focal point, while The Strand Is Mine, which was made at night in four hours without much reworking, is a kind of self-portrait, one that she had initially written underneath the canvas: “You dangle your validation above my head like a strand of gold but the strand is mine,” referencing the artist’s thick blonde hair, and that she leaves “a piece of myself everywhere I go, for better or for worse,” which is also a reclamation of power – a pivot from dependency. Just as those two works were created together, so was the other pair. The Enigma and A Dream is imbued with the story, she said, of “two ships passing in the night.” A lightness persists through the work’s distinctly pastel tones and its absence of both black charcoal and stark geometry that might also connote the shape of a human head. All Of The Things You Never Let Me Say, alludes to Weiner’s relationships, and was the last painting she finished. Of the four works, the artist said that “the first two paintings came more [from] an automatic surge of emotion, and then these two paintings were carved out of the rubble of the experiences of what took place over the last six weeks.”

The flowers that appear through hazy outlines and darker strokes in these paintings are a recurring motif in Weiner’s work. “The flowers,” she explained, “reference this stigma with women and flowers, or forgiveness and flowers…how you can hurt someone so much and flowers are supposed to be this token of exchange of forgiveness. Whether a romantic gesture or a shallow exchange of emotion, flowers are supposed to appease. I love flowers” she added, “but I think I initially started exploring them out of resentment. Flowers are not enough. A symbol of my femininity, being able to render them in a way that feels sometimes harsh and heavy is a juxtaposition that’s fun for me to explore.” Writing is also a through-line in Weiner’s oeuvre. For her, the confidence to share this writing, which “comes more naturally than painting does, is still forming. I am addicted to freedom,” she exclaimed, “the idea of freedom, freedom of speech [and] the first medium that I explored [was] the weight of my words.“ The Enigma and A Dream

Weiner pointed out that in future works she could see paintings existing with only text. For now, her words appear in moments of uncovering – phrases from larger streams of consciousness, poetic one-offs, brash statements, with her words also living underneath the canvases. But whether hidden or visible, these phrases are as much a part of the finished pieces as the strokes that meet the eye. Often repainting and repurposing her works in new ways, Weiner described returning to works that she thought were finished when quarantining began. And as for knowing when a work is finished, she replied, “If I can stare at you and not hate you, that’s almost where the standard lies for me. I know when a work is not finished is when it irritates me enough and I have to implement change. With “An Enigma And A Dream” and “All The Things,” I let the date of this show be the cut-off. I felt myself not wanting to paint anymore, needing a break. I think as a young artist you want every work to reflect everything, but at a certain point you realize it’s okay for a work to just be one thing.” The Strand Is Mine (self-portrait)

At a time when so many are disconnected from one another, Weiner has created an intimate experience – one that even in a normally-functioning art world would stand out. On keeping this energy when sheltering-in-place ends, she opined, “I think we, as artists, want to be in MoMA and have our work shown along our heroes. But this [garage show] is equally important and now I see that. Overall, I think that letting people in more – even if it’s just digitally – to what I’m making and why, serves a greater purpose.” On reusing the garage in future, Weiner is adamant. “I think I’m absolutely going to keep this as an intimate space, I’m going to let it organically become what it wants to become. Maybe it will be a studio of works I never show anyone, or it will be a space that I open up again where people can come.” One caveat, though, is that in a typical gallery space, optimal viewing positions for works is exercised, while there is limited room in the Soul Car Garage, where visitors are confronted by the paintings with jarring proximity. “If I’m as good of an artist as I think I am, I will be able to make these paintings no matter what, in any condition, and any spatial difference should not matter.” Indeed, HEAD illustrates the power of artistic expression in a time of upheaval, the power of connection in a time of isolation, and is testament to adaptability. In exploring heads as containers for the multiplicity within individuals, these works process the past and the present, and in their very creation and installation perpetuate a hopefulness for a brighter future.

Natalie Pashaie graduated from the University of Southern California, where she studied art history and comparative literature. In addition, she wrote art criticism for the Daily Trojan.