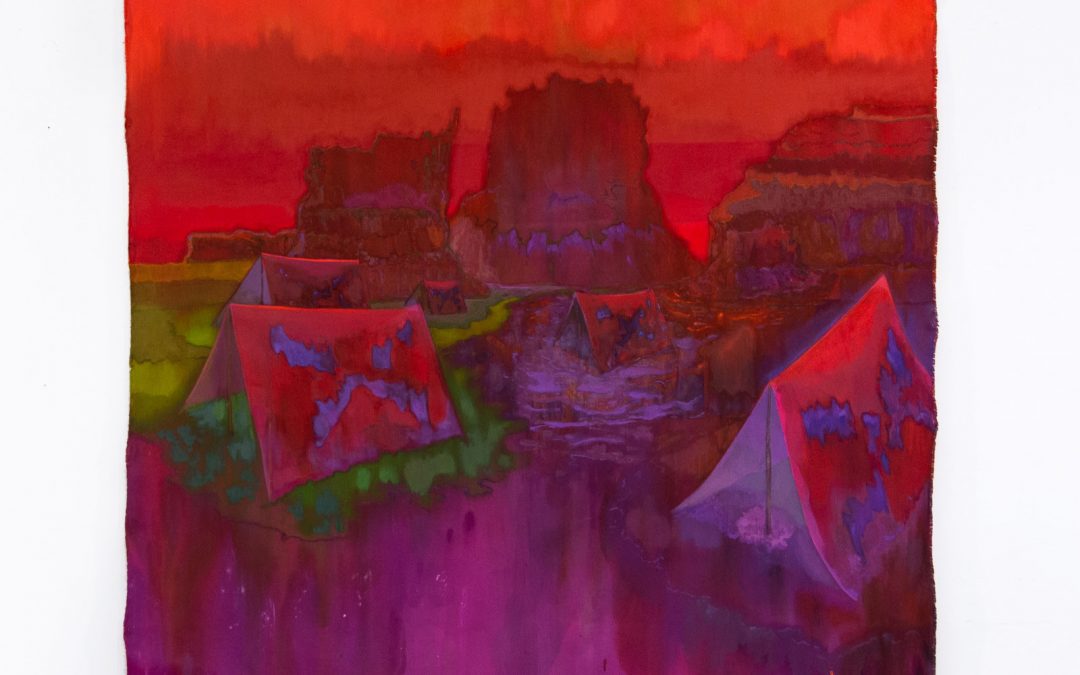 Depicted by shifting light, a day unfolds over Monument Valley—the main stage of Sedrick Chisom’s screenplay odyssey, 2200. Chisom’s sci-fi epic, in which People of Color have abandoned a dying Earth to explore the universe, serves as an ongoing touchstone for his paintings. Recently illustrated as an explosive site of conflict in Westward Shrinking Hours, Year XX10… presents a post-violent sequel of stationed Confederate soldiers, their portrayal densely symbolic but otherwise still—an encampment in panoramic view is beseeched under a blazing sunset as pillars of the Monument rise forebodingly just ahead. Later that night, a soldier wanders through an inescapably-barren, nuclear landmass. Chisom’s in-between banality conveys a silence with the same weighted dread as activated war.

In the flushed, crimson scenes of fiery oranges and purple shadows, Year XX10… engages Chisom’s fascination with thermal vision imagery and its ability to highlight connections between seeing and violence. The symbolic features illustrated in Chisom’s work utilize history and mythology to activate an imagined, not so far future where the battleground is based physically in a very real past. Hanging like tapestries, the unstretched canvases depict a camp of Confederate soldiers stationed on Earth in Monument Valley—a territory which lies within the Navajo Nation Reservation. Known for its dramatic beauty, this landscape serves as a symbol of America’s dark history of the young country’s race to expand and colonize the west under the guise of Manifest Destiny. A quietly foreboding group of Confederate tents are pitched in the calm just following combat; a soldier holding a sword looks off into the distance as he walks through a barren, nuclear landscape at night.

Chisom’s compositions reference the radicalized idioms of Victorian fantasy illustration, and use the romantic landscape as a site where apocalyptic narratives of white supremacy, Christianity, and climate change intersect—creating a scenario in which most of the built environment has been obliterated and transformed into a toxic, hallucinatory wasteland. His concerns lie with the historical construction of whiteness in fiction as an antagonism between notions of civility and barbarism, the built environment versus the “natural” landscape, and the civic human subject in relation to the monstrous absolute Other.