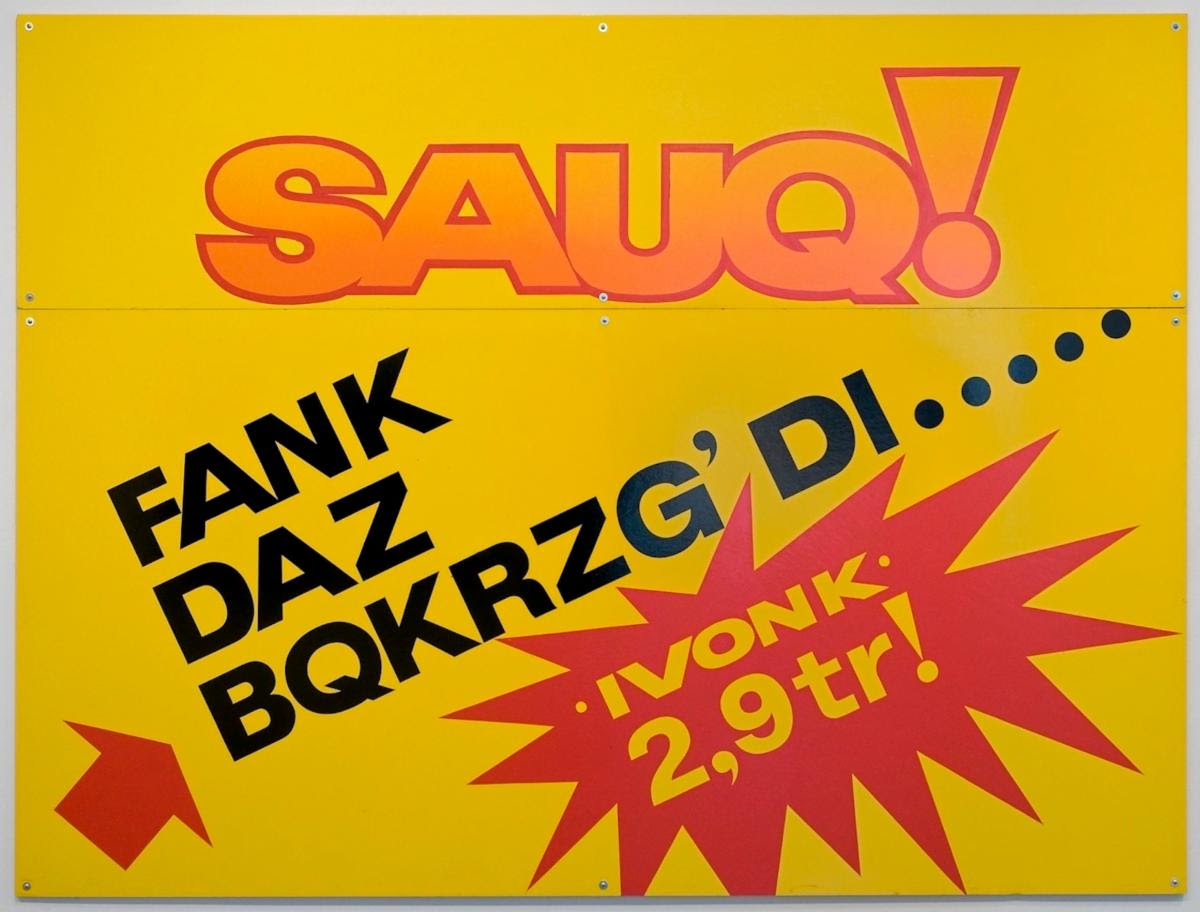 An innovator of post-conceptual art, Lum’s work has been widely exhibited since the 1970’s. The artist explores how existing political, economic, and social structures play a significant role in the construction of identity leading to tensions between personal experience and external classification. For Frieze New York’s Viewing Room, we focus attention on early works leading up to the 1990s, including his series’ ‘Language Paintings’, ‘Portrait-Logo’, and ‘Furniture Sculptures’.
Hand-painted signs, titled ‘Language Paintings’, overwhelm the viewer with sprawling, incomprehensible text that can only be understood visually, replicating the feeling of an immigrant who is unable to understand the language. Lum questions the systems that order our perception of the everyday world, using modes of advertising to address personal anxieties in the public sphere.
Lum’s ‘Portrait-Logo’ Series which began in the mid-1980’s, features bold custom-designed logos spliced with ambiguous portraits that use the conventions of common studio photography to explore how we identify relative to others. Within a realist tradition, the depictions are not idealized but record the everyday person striving for autonomy in a society that shapes their positions. Large scale chromogenic prints on plexiglass such as “Pamela Gloggins is Candi Sweet”, “Alex Gonzalez Loves His Mother and Father”, and “Natividad Castillo Wants Respect” blur the boundary between art and popular culture.
For his ongoing installations, as part of the ‘Furniture Sculptures’ Series’, the artist assembles various decorative pillows, side tables, and sofas. By forming configurations that are impossible to access, he eliminates the furniture’s function and reconstructs it into sculpture. These plush blockades create a composition that keeps the viewer in isolation, only being able to interact as a marginalized figure. The powerlessness of the observer is apparent as various forms of exclusion fester and remind of the many boundary lines of contemporary society.